An Extremely Rare, All-White, Albino Panda Was Just Spotted For The First Time Ever In China

Researchers have documented brown and white pandas in the past, but never an all-white one. 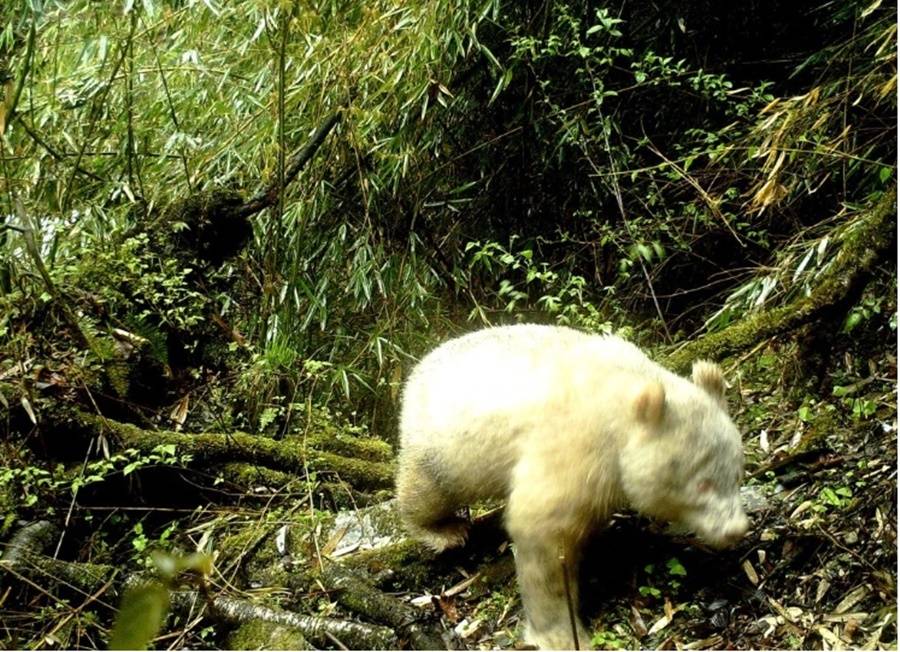 Spotting a wild panda in the remote areas of the forest where they dwell is hard enough, so stumbling across an albino panda in the wild is, perhaps, just unfathomable.

Or at least, that’s what experts would have believed.

According to a statement from Chinese authorities, the albino panda was photographed last month on one of the infrared cameras set up inside the Wolong National Nature Reserve territory in the southwestern province of Sichuan.

Although albinism has appeared in the giant panda species before in the form of brown and white fur, this is the first time a completely white albino panda has been documented. Because of the rarity of albinism and of finding a panda lumbering in the wild, this sighting is not only serendipitous but somewhat uncanny.

“I personally think it’s quite random for it to be discovered, since albinism manifests itself so infrequently,” Dr. Li Sheng of the Species Survival Commission under the International Union for Conservation of Nature told The New York Times. “This was recorded just in time.”

The normal synthesis of melanin gives most living organisms, including humans, their skin color. But a rare genetic condition, known as albinism, prevents that normal synthesis from happening and results in white hair or pale skin. This condition can also affect the coloring of an individual’s eyes which is why animals or people who have albinism often have reddish irises.

Brown and white pandas, which are also considered to be albino, have before been spotted in the northwestern Chinese province of Shaanxi. Although albinism has rarely ever been recorded in many other species of bear, it has never manifested completely among giant pandas. At least, until now.

In the infrared image, almost all of the features of the albino bear appear to be white including its claws. Its eyes, which are slightly blurred because the image was captured as the bear was moving, give off a reddish hue.

Expert analysis estimates that the photographed bear is roughly about one to two years old and seems to be doing well in the wild.

“Based on the photo, albinism has not affected the life of the white panda much… It looks quite well, quite strong,” Li added. Indeed, albinism tends not to negatively affect many species save for sensitivity to sunlight.

Fewer than 2,000 pandas live in the wild and they mostly reside in the Chinese provinces of Sichuan and Shaanxi. Globally, there are 548 captive pandas that currently exist.

Wild pandas can be difficult to study because of their solo lifestyle and the remoteness of their natural habitat. But the Chinese government recently ramped up their efforts to make it easier for researchers to conduct studies on this endangered species in their natural habitat. The hope is that this research will further benefit conservation efforts for the species. 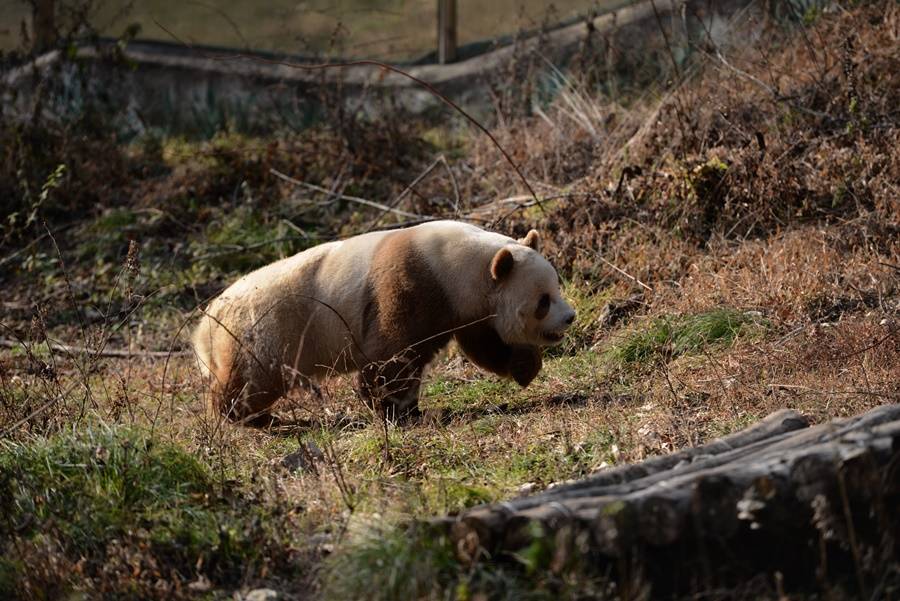 Heng Guoliang/VCGAlbinism in giant pandas has only been recorded in the appearance of brown and white pandas until now.

Some of the most significant conservation efforts for pandas have actually involved facial recognition technology. A Chinese conservation center developed a facial recognition app that can distinguish individual pandas from one another and the app’s database now contains roughly 120,000 images and 10,000 video clips of the giant pandas.

So far, almost 10,000 images of pandas from the massive database have been analyzed, annotated, and marked since 2017.

“The app and database will help us gather more precise and well-rounded data on the population, distribution, ages, gender ratio, birth and deaths of wild pandas, who live in deep mountains and are hard to track,” Chen Peng, a researcher at the China Conservation and Research Center for Giant Pandas, told Xinhua.

“It will definitely help us improve efficiency and effectiveness in conservation and management of the animals.”

As for China’s newly discovered albino panda, the Chinese government hopes to continue monitoring the bear to track its development and activity.

Next, read these 33 panda facts that are guaranteed to delight you. Then, learn about the bizarre hanging coffins of China and the Philippines.