8 Interesting Plants You Have To See To Believe

See some of the world's most interesting plants in action and discover what makes them so exotic, dangerous, and seemingly from another world. 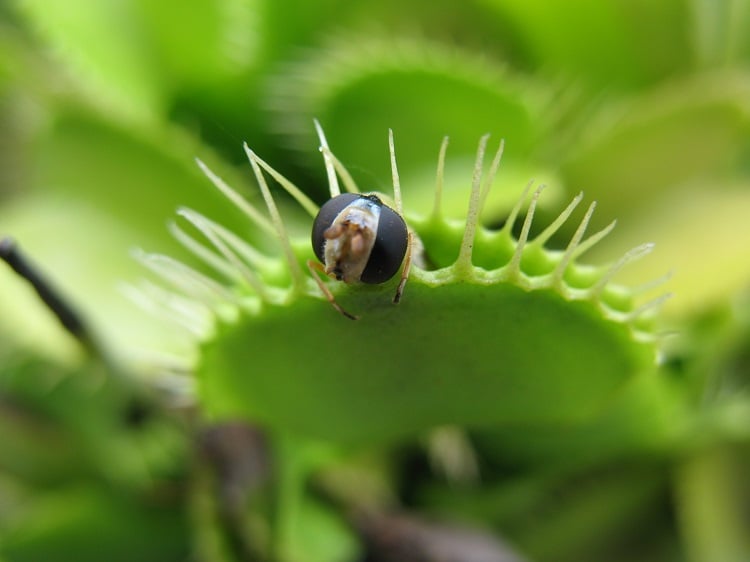 Given their popularity, it’s pretty likely that you once had a Venus Fly Trap in a tiny, plastic terrarium as a kid. So popular are the perennially hungry plants that their novelty status has made them a threatened species in some areas where it grows wild. While Dionaea muscipula, the plant pictured above, is fascinating as a carnivorous plant that feeds on flies, spiders and other small insects, there are others in the plant kingdom that are just as interesting. Though you aren’t likely to find these unique plants in a home garden. See some of the world’s most interesting plants below… 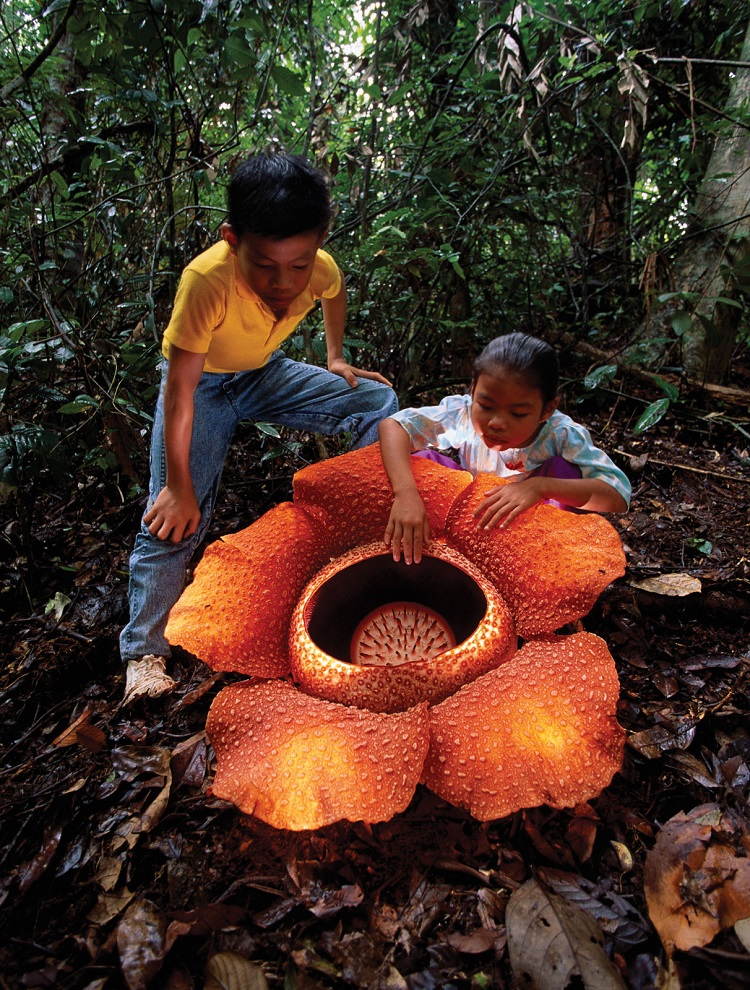 Rafflesia arnoldii is distinguished as the largest individual flower on Earth. It grows in the rain forests of Borneo and Sumatra and can reach a diameter of 3 feet, and weigh as much as 24 pounds. But there is another distinct feature that makes this flower of interest: It smells like rotting flesh, earning it the nickname of “corpse flower.” The stench has a functional purpose, as it attracts flies, beetles and other insects for pollination. 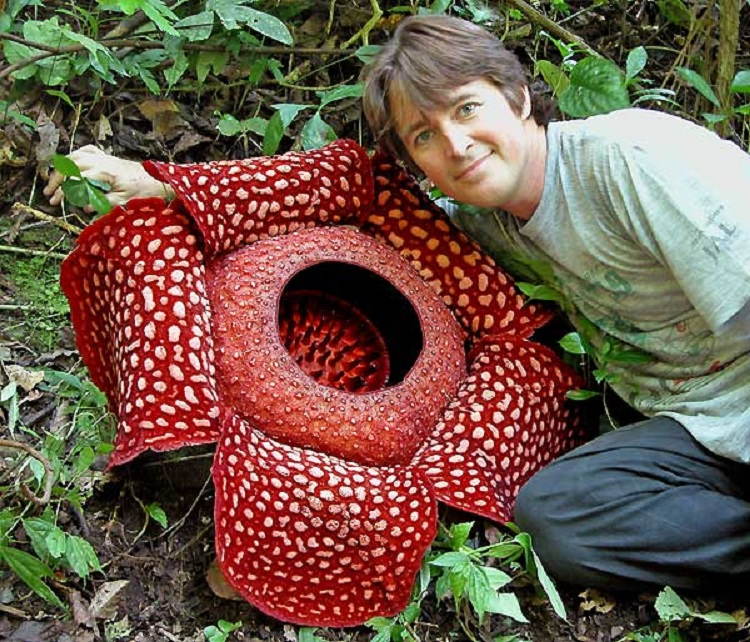 The Rafflesia arnoldii is one of three national flowers of Indonesia, whose government officially declared it a “rare flower” in 1993. The unisexual flower received its present status because pollination is very difficult, requiring insects to visit both male and female flowers in that order. Plus, the flower lives for just a few days. Add to that the fact that the parasitic plant only grows out of its host plant, the Tetrastigma vine, and you’ve got yourself a plant that is as putrid as it is delicate. As humans encroach on more of the rain forests, the number of corpse flowers seems to be dwindling. 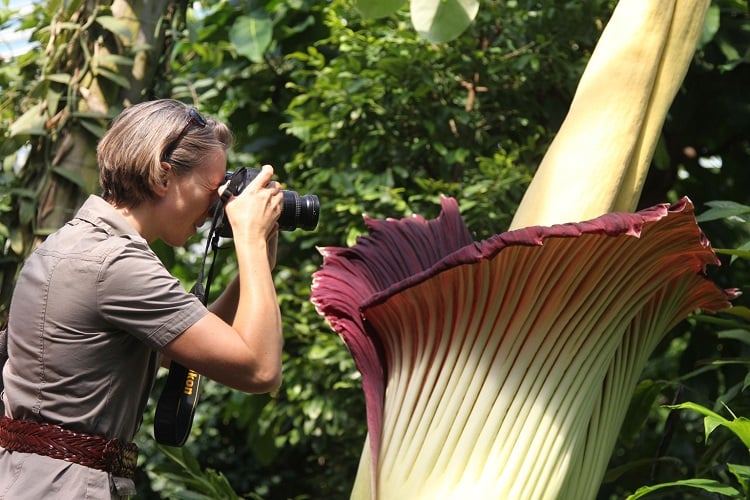 Indonesia has the distinction of having not just one but two interesting plants commonly called “corpse flowers.” But unlike the Rafflesia arnoldii, which grows close to the ground, the Amorphophallus titanum can shoot up as much as 10 to 12 feet in the sky, with a trumpet-like spathe that, when it unfolds, reveals a central spadix reminiscent of a loaf of French bread. Others might make a different comparison. There is a reason the flower has “phallus” in its name. 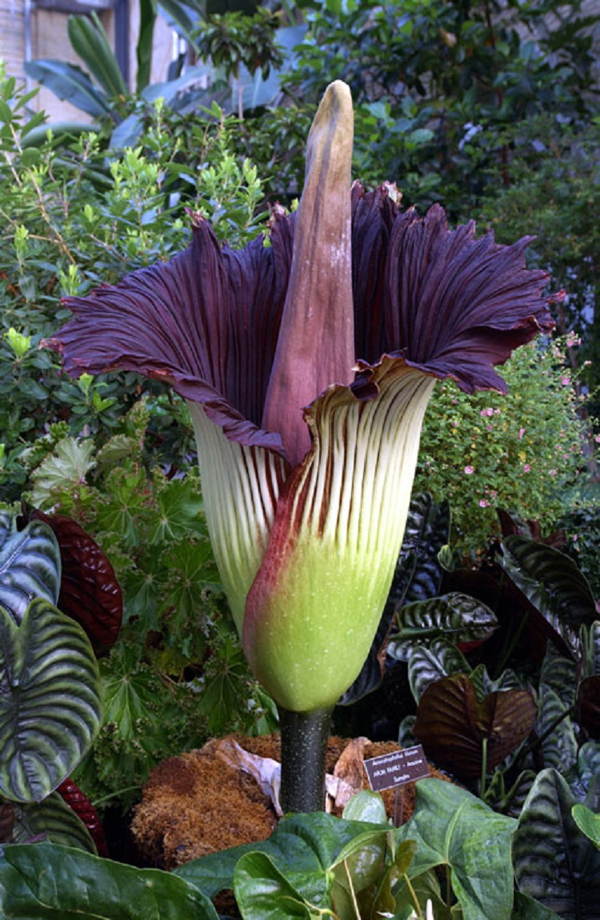 The flower, also called the titan arum, blooms only a few times in its 40-year life cycle. When it does, it creates quite a stink, often attracting media attention. In its first eight hours of blooming, the plant emits a terrible smell like rotting meat with the deep maroon to purplish interior of the spathe completing the illusion of decomposing flesh. It, too, is meant to attract insects for pollination. Once the smell diffuses, birds are attracted to the flower’s bright colors, eating the seeds and spreading them to other locations for new growth. 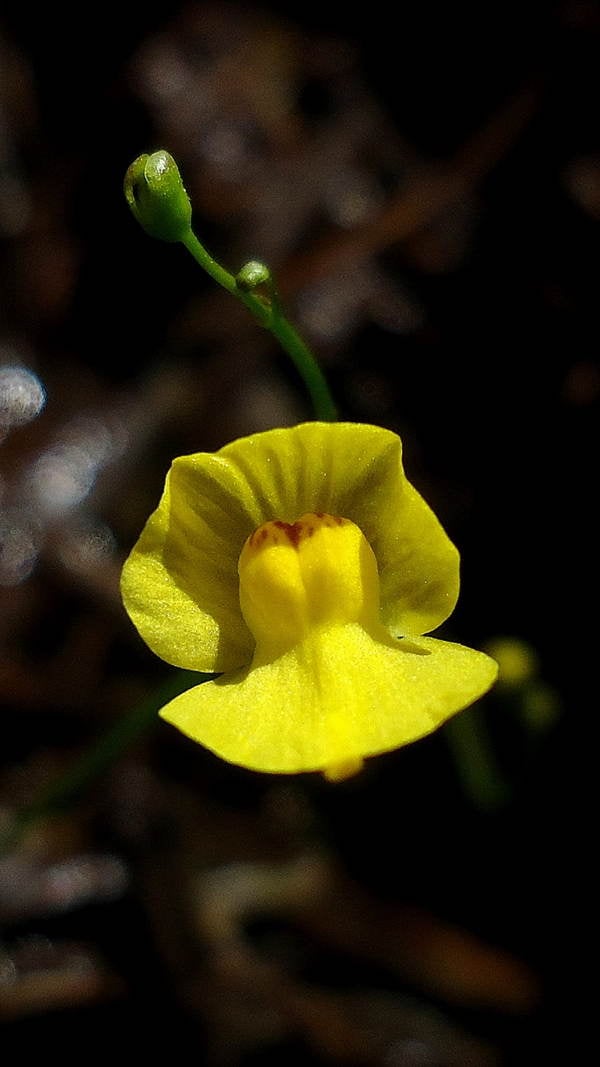 Resting atop water, Utricularia gibba, commonly known as the humped or floating bladderwort, can look beautiful with delicate, yellow blooms. But the plant is a killer. Beneath the surface of lakes and ponds where it grows are networks of branches and bladder traps that suck in everything from insects to tiny crustaceans, which become its food source.

Having been called one of the most sophisticated mechanisms (carnivorous or  otherwise) in the entire known plant kingdom, the sacs hanging from submerged branches have a hinged “door” and membrane that remain sealed by an equilibrium of pressure. But once it is touched by unsuspecting prey, the seal breaks, water rushes in and the plant’s dinner is sucked in as if by a vacuum cleaner. The carnivorous aquatic plant can be found on just about every continent. 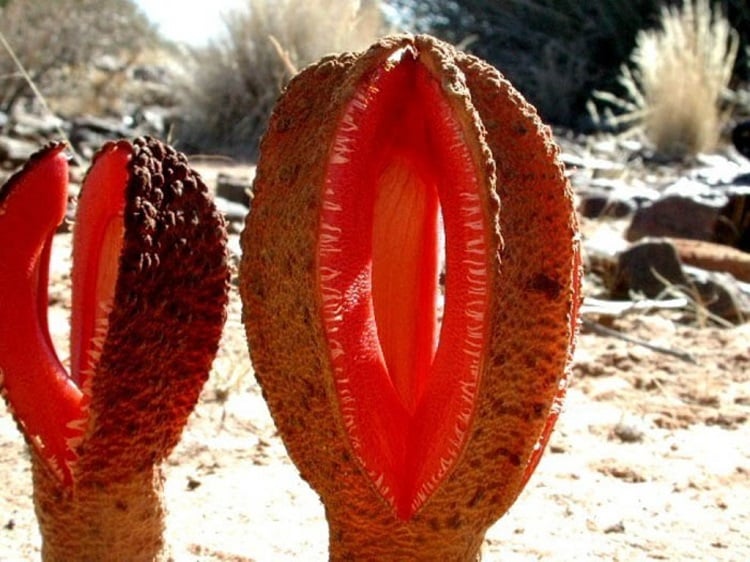 It looks like some bizarre creature on an alien planet or one of the monsters in the movie “Tremors,” but the Hydnora africana is a plant that lives a mostly subterranean life, feeding off the roots of other plants until its fleshy, vermilion flowers begin to poke up through the ground. Like others already mentioned, this flower too has a disgusting smell, like feces. With its leathery exterior and fringe-like hairs that resemble teeth, one might expect the plant to be carnivorous. But kidnapper might be a better description. 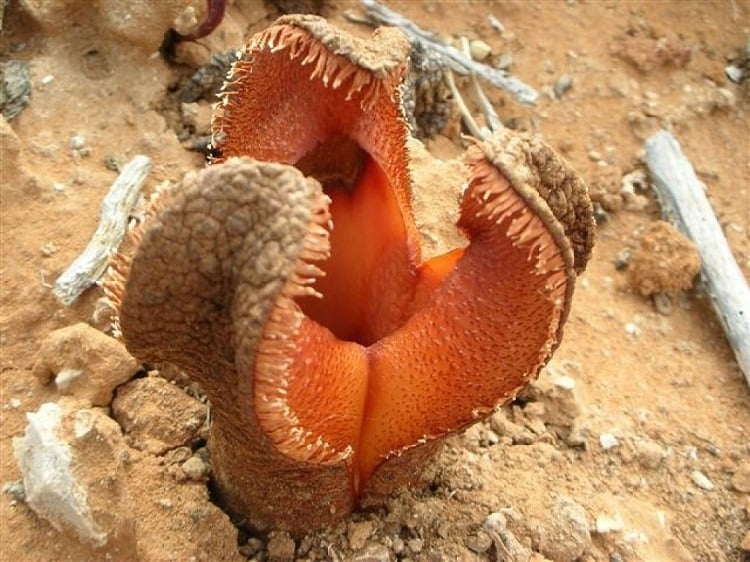 These interesting plants, found in southern Africa, uses its horrible odor to attract natural pollinators, dung beetles and carrion beetles, which are attracted by the smell. Once trapped by the plant’s inward-pointing hairs and joined petals, the insects remain incarcerated for a few days until they are sufficiently covered with enough pollen to fertilize other plants. When the flowers mature and open, the bugs are able to escape. 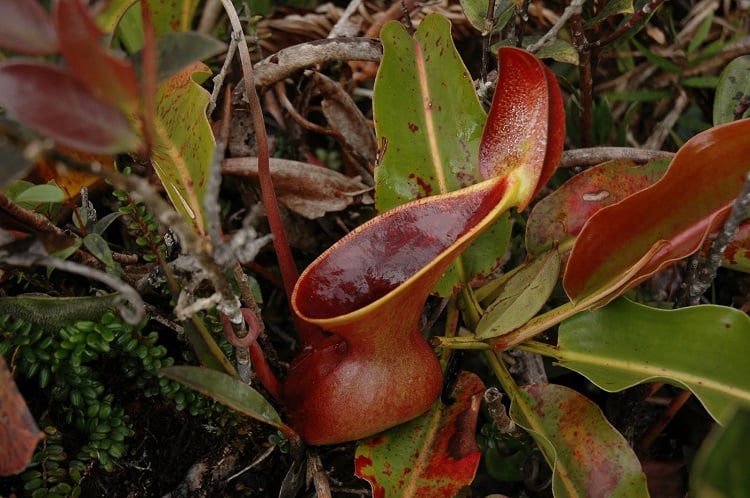 All so-called pitcher plants are fascinating. Some have been known to trap and digest such things as birds and mice, which were probably trapped unawares. However, the meat-eating characteristic of Nepenthes lowii remains in question. Members of the genus Nepenthes usually trap and digest insects in their fluid-filled “pitchers.” The Nepenthes lowii may prefer a much more disgusting meal. Botanists are still debating whether the plant feeds on fecal matter from animals, particularly tree shrews. 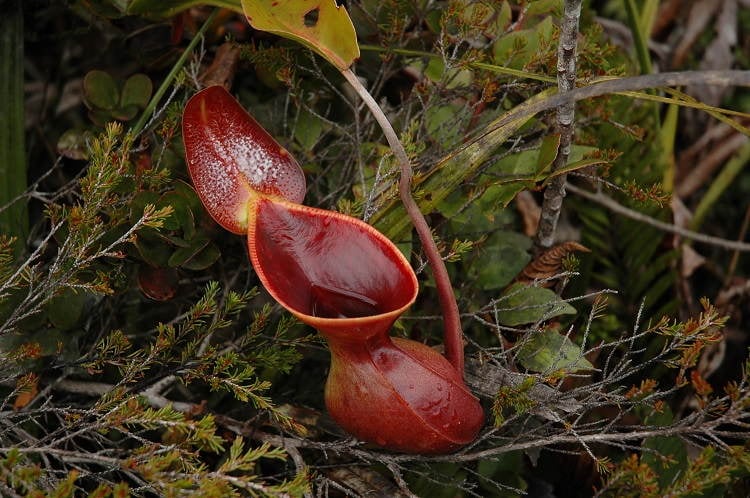 Also called Low’s pitcher plant, Nepenthes lowii has a considerably different shape than most other pitcher plants. It is also noted that it rarely catches insects in the pitcher, which is the same size as the Mountain Tree Shrew. The plant secretes a white substance, like crystals, on the underside of its “lid.” Described as tasting “sugary,” it is thought to attract the tree shrew and act as a laxative so it can collect the animal’s droppings, much like its close cousin, Nepenthes raja, in the video above. Studies show that the plants get 57-100 percent of their nitrogen from shrew defecation. 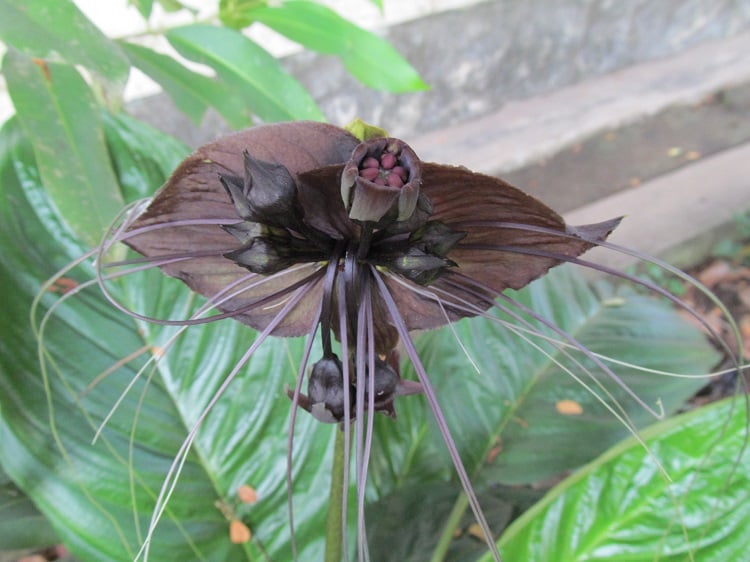 Because there aren’t too many black flowers in the plant kingdom, the “bat flower” attracts a lot of attention from collectors and gardeners. Tacca chantrieri actually belongs to the yam family Dioscoreaceae, but it looks nothing like a sweet potato. With bracts—leaves that look like petals—that can measure a foot across and resemble wings, there’s no question how the plant got its common name. Plus, it has threadlike bracteoles that hang from the flowers like foot-long whiskers. 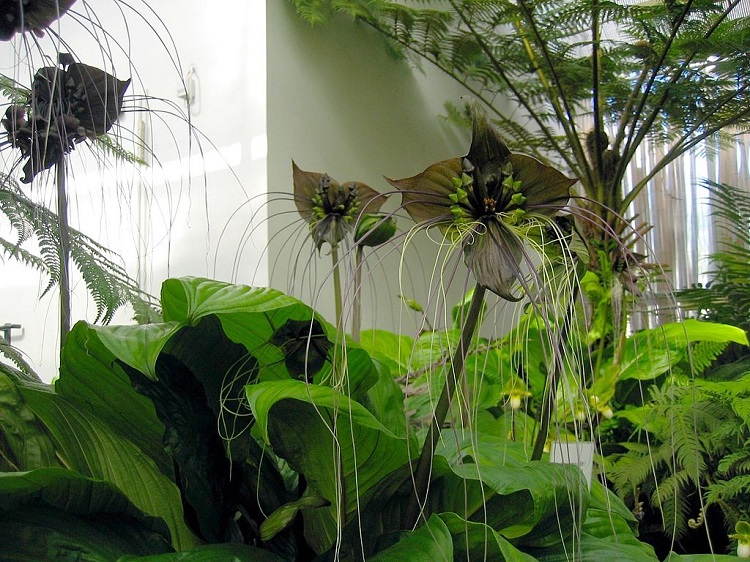 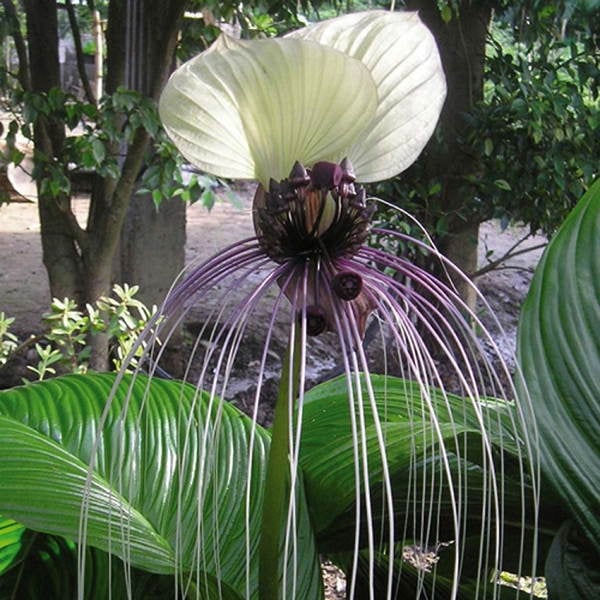 Initially admired for its green foliage, the bat flower grows in the wild in the tropical forest of Yunnan Province in China, but in recent years it has been commercially cultivated to satisfy gardeners in Europe and America who want something really unusual for their backyards. For those who find the black bat too scary, a white species has recently been cultivated as well. They grow best in tropical climates with high humidity.

Always a favorite with elementary school science teachers looking for a way to capture young students’ interest in the subject, Mimosa pudica, better known as the sensitive plant or shy plant, grows like a weed in pantropical climates. It is native to South and Central America. It is a creeping annual or perennial herb that flowers, but is more often grown for its curiosity value. As a protective device, the compound leaves fold inward and droop when touched or shaken before re-opening minutes later. 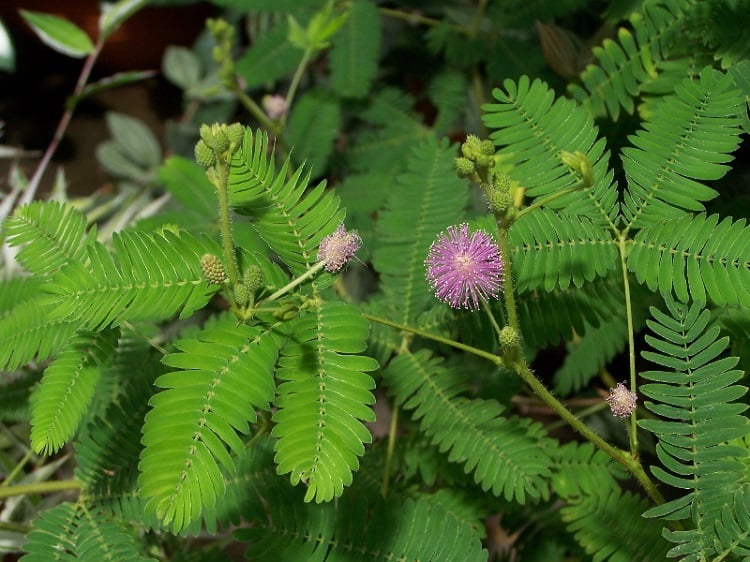 If you are in the market for an expanded vocabulary, try the word “thigmonasty” on for size. This is the technical term used to describe the touch-induced movement these plants display. They also close up their leaves at night. Left unchecked in the wild, the herb can grow as tall as 2.5 feet, often forming a small bush. The pinkish plant grows small thorns as it matures, and some countries consider it an invasive species. 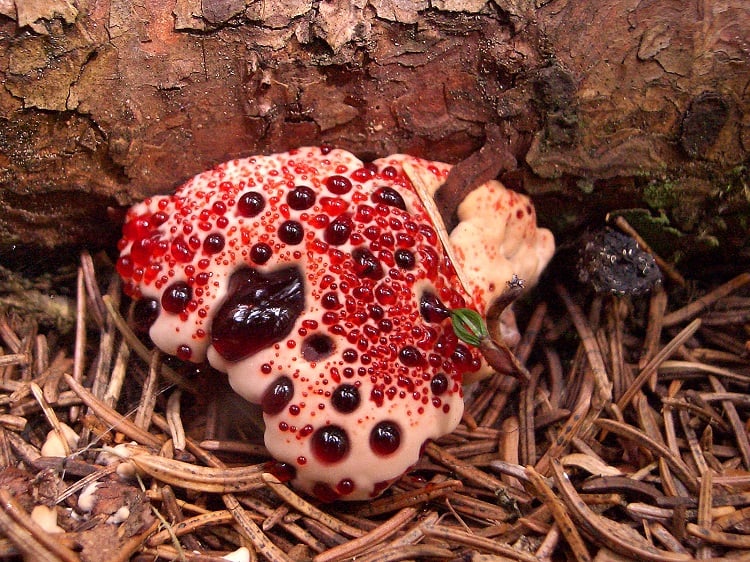 Okay, technically it’s not a plant, but a fungus. But we’re not splitting hairs here and this one is too weird not to mention. It seems no one knows what to make of Hydnellum peckii. While some call it bleeding tooth fungus, others have dubbed it strawberries and cream. Other common names include the bleeding Hydnellum, the red-juice tooth and the Devil’s tooth. The “toothy” names stem from clusters of slender, cylindrical and tapering growths on the fungus’ underside that produce spores for propagation. 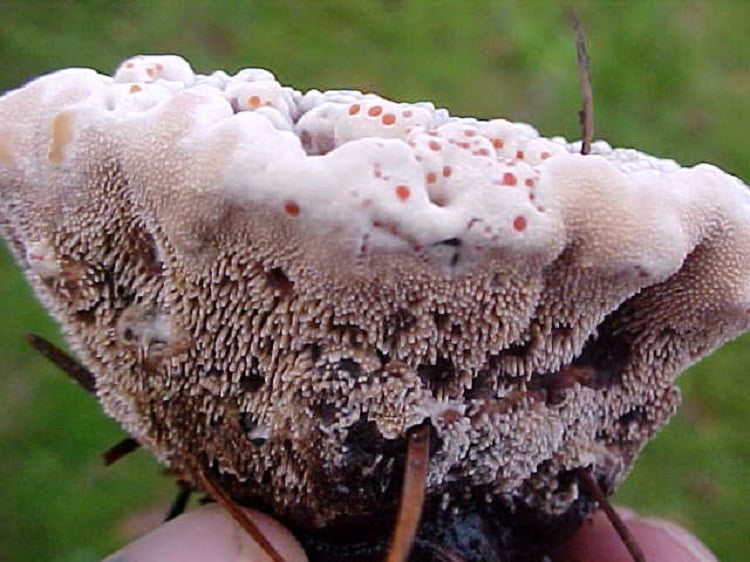 Unfortunately for those who like to call it strawberries and cream, Hydnellum peckii is inedible. It grows in North America, Europe and was recently discovered in Iran and Korea. It is mycorrhizal, which means in its natural habitat it grows on the roots of various conifers, which feed the fungus while it helps improve the soil around the tree. As they age, they turn brown, losing their trademark blood spots making them look like wild mushrooms.

After this look at interesting plants, have a look at some of the world’s strangest plants. Finally, read up on some of Earth’s most fascinating carnivorous plants.