The acclaimed surgeon concealed his biological identity from his colleagues as long as he lived. 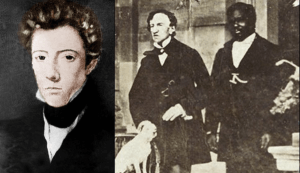 WikipediaA portrait of James Barry, and a photo of Barry (man on left).

As Dr. James Barry was on his deathbed in July of 1865, those attending to him discovered something new: He was born a woman.

Indeed, the English surgeon – who performed one of the first cesarean sections where both mother and infant survived, and who saved countless lives working for the British Army – was born Margaret Ann Bulkley, an identity that Barry had abandoned early in his life.

Though his exact birthdate hasn’t been pinned down, James Barry was likely born around 1790 in Cork, Ireland and was given the name Margaret Ann Bulkley. She was the second child of Jeremiah and Mary-Ann Bulkley. There has been some evidence that suggests that, after being raped by an uncle as a teenager, she gave birth to a baby who her mother raised.

At the time, women had very limited career choices. Margaret Bulkley was frustrated by her lack of options, she reportedly once told her brother, “Were I not a girl, I would be a soldier!”

Bulkley’s interest in medicine came in her teens when her family fell on hard times and moved to London. Formal education wasn’t typically available to women at the time. Practicing medicine wasn’t either. Bulkley had an uncle in London, a Royal Academician and painter, who supported her mission to practice medicine. When Bulkley was around 18 years old, her uncle died and Bulkley assumed his identity. His name was James Barry.

From then on, Barry concealed his identity. Using a fortune left by his late uncle, Barry enrolled as a medical student at Edinburgh. He wore a man’s overcoat — though his high-pitched voice, slight stature, and soft skin led many of his peers in medical school to think Barry was too young to be there.

Though he was 22-years-old, authorities suspected he was just 12. Good at making powerful friends, Barry got the Earl of Buchan (the provincial ruler of the province of Buchan, Ireland) to intervene when the university deemed Barry too young to take the exam that would grant him his degree.

After passing the exam, Barry signed up for the army. Soon enough, Barry traveled the world working for the British military — first as a hospital assistant and then as a staff surgeon. His work would take him all the way from Cape Town, South Africa, to Mauritius, meeting with the likes of Lord Charles Somerset, Cape Town’s governor, and Florence Nightingale, who described the hot-tempered Barry as “the most hardened creature I ever met.”

But beneath that rough exterior was a man who fought for the vulnerable. Throughout the course of his life Barry took on the powers that be in prisons, barracks, and asylums, demanding the improvement of sanitary conditions and institutional management. While in colonial Cape Town, South Africa, Barry treated everyone who sought his help: wealthy and poor, slaves, and slave owners.

A Secret Identity Revealed And A Legacy Left Behind

James Barry was forced to retire from the army in 1859, as he had gradually become iller as a result of old age. He died in 1865.

News of James Barry’s biological identity became public soon after his death, when letters sent by his doctor, Major D. R. McKinnon, were leaked. In one correspondence, McKinnon wrote that Barry’s identity was “none of [his] business,” a view that would not officially resonate with British powers that be until at least 1967, when the Sexual Offences Act partially decriminalized homosexuality.

Not many suspected Barry’s original identity during his lifetime, however after his death and the shocking revelation, several acquaintances stated that they had guessed it all along. There was also debate on whether James Barry chose to live as a man because he felt like a man, or whether he was driven by ambition rather than identity.

Barry was a significant figure in 19th-century British medicine, so much so that in 2017, U.K. officials deemed Barry’s grave a site of historical significance in shaping the country’s LGBT history.

At the time, Heritage Minister John Glen said that it is “vital that we remember all the communities that have shaped our past. I am delighted that we are recognizing the significant contribution made by these outstanding people and protecting the places where they lived and worked for future generations.”