The Story Of James Hoffa, The Son Of A Notorious Racketeer Who Became An Honest Leader Of The Teamsters

While James P. Hoffa's father Jimmy led the Teamsters, he was in bed with the Mafia. But when James became president, he fought back against corruption. 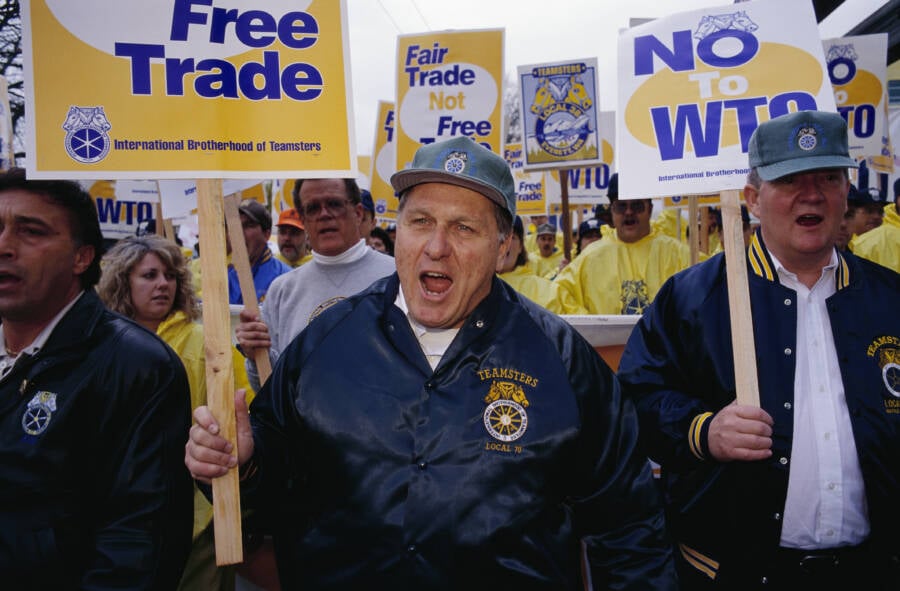 David Butow/Corbis via Getty ImagesJames P. Hoffa marches for his union in Seattle in 1999.

To put it mildly, Jimmy Hoffa was a controversial man. Until Hoffa’s sudden disappearance in 1975, he had no problem courting organized crime as the leader of the International Brotherhood of Teamsters. But his notorious legacy was not shared by his son and successor, James P. Hoffa.

Despite leading the same union as his father for nearly 25 years, James P. Hoffa had little in common with him besides their infamous name. Indeed, the younger Hoffa ran the union with almost surgical precision, turning it into one of the strongest organized labor unions in the country.

Considered a foremost authority on workers’ issues, Hoffa championed diversity in the workplace, a fair and equal wage for all, and solidarity and brotherhood amongst the working class.

Ultimately, though, he chose not to seek re-election for this position and vacated the position in November 2021, marking the end of a decades-long career that was filled with both powerful rhetoric and notable achievements.

This is the true story of James Hoffa, whose infamous name belied his skill at the union bargaining table.

James Phillip Hoffa was born on May 19, 1941, in Detroit, Michigan. He was the only son of Jimmy Hoffa and his wife, Josephine. He also has an older sister, Barbara, who went on to become a judge in St. Louis, Missouri, before eventually retiring. Clearly, a devotion to service was a family trait.

Indeed, as the younger Hoffa himself put it, he grew up on picket lines and in union meetings before becoming a card-carrying member of the Teamsters when he was just 18 years old, courtesy of his father, of course. 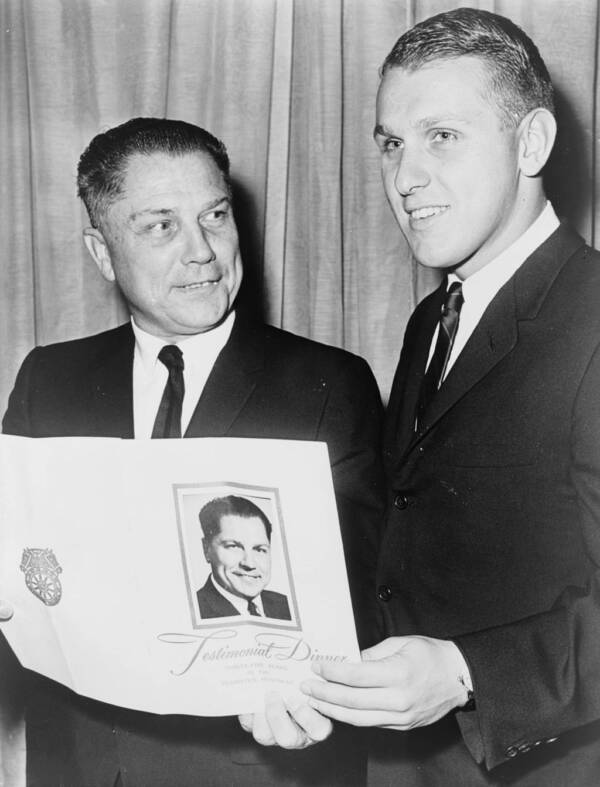 Wikimedia CommonsJimmy Hoffa with his son, James P. Hoffa, at a testimonial dinner in 1965.

But before he would fill his father’s very large shoes at the helm of the Teamsters, James Hoffa would study at Cooley High School, where he was a member of the National Honor Society.

In 1963, he graduated from Michigan State University with a degree in economics, then went on to get a law degree from the University of Michigan Law School three years later. After completing a Ford Foundation Fellowship to work in the Michigan Senate, he became an attorney for the Teamsters in 1968.

During this time, he married former veterinary technician Virginia Sue Harris, with whom he had two sons. In the summer, the family would visit their cottage in Orion Township, Michigan, just outside of Detroit.

All in all, the younger Hoffa led an all-American, relatively sedate life — which stood in stark contrast to his father’s tumultuous life and the circumstances surrounding his disappearance and death. But then, in 1996, everything changed.

How Jimmy Hoffa’s Son Inherited His Role In The Teamsters

In 1996, James Hoffa campaigned against the incumbent Teamster president, Ron Carey, in Philadelphia. Carey was a popular Teamsters leader, having successfully led a campaign of over 185,000 workers against United Parcel Service (UPS), and campaigning on an anti-corruption platform in an effort to distance the Teamsters from Hoffa’s infamous father.

However, he won over the younger Hoffa by a very narrow margin, earning only 52 percent of the total vote. Carey’s victory was also short-lived: shortly after the UPS strike ended, a federal union overseer voted to overturn Carey’s victory after it was discovered that for all his “anti-corruption” talk, his office was accepting large payments from donors — which are forbidden by federal law — and funneling the money to pet causes in exchange. 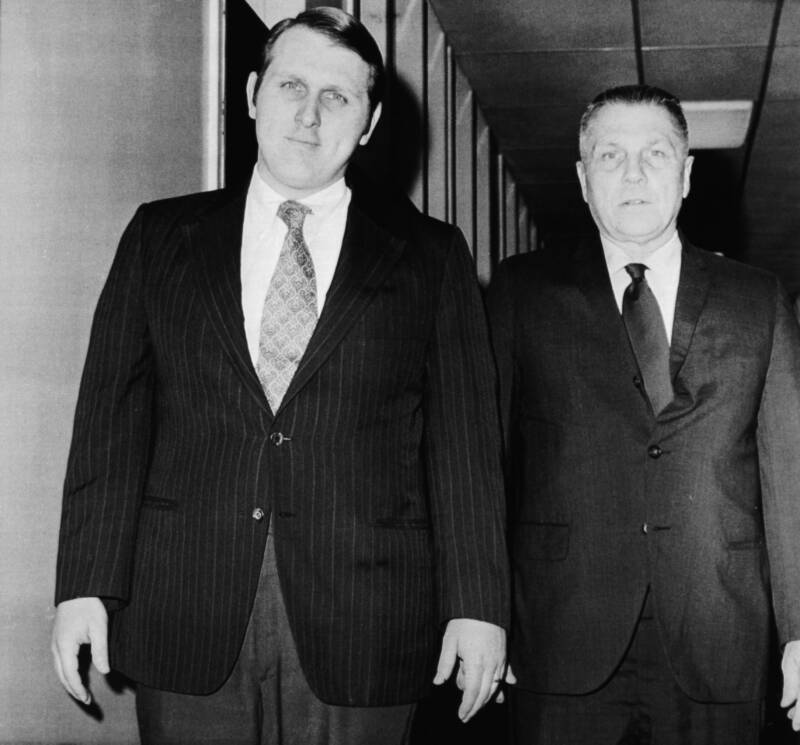 Getty ImagesThen-President of the Teamsters Jimmy Hoffa with his son, James P. Hoffa. The elder Hoffa was on a one-week furlough from prison where he was serving a 13-year sentence for jury tampering at the time.

Ultimately, Carey was expelled from the Teamsters, and James Hoffa took his place as president. Hoffa made clear that the Teamsters were not going to get a reboot of “Jimmy Hoffa” infamy under his leadership. “My father was a very different person than myself,” he said. “I’m my own person. My father was born in 1913. He lived through the Depression. He came up through the school of hard knocks. I’m not going to war with anyone.”

Under Hoffa’s leadership, the Teamsters union rose to become the most powerful union in the nation.

He earned a fearsome reputation as an outspoken critic of America’s politicians, especially those who prioritized foreign trade over domestic products. He organized, and subsequently enforced, some of the most worker-friendly contracts in the nation, guaranteeing salaries, benefits, and most of all dignity to the working class.

Hoffa regularly contributed to The Huffington Post, where he outlined all the ways that American workers — whether they were Teamsters or not — could campaign for their rights in solidarity with their co-workers.

“The Teamsters stood up against these anti-union actions because they understood what was at stake. Voting yes was the first step in fighting back against a larger attack on working families in Iowa,” he wrote in 2017 in support of Iowa union members who were limited by state laws from collective bargaining. “That’s what Teamster Power is all about.”

Looking To The Future — And Organizing Amazon Workers?

James Hoffa’s commitment to the Teamsters in a leadership position came to an end on Nov. 19, 2021, with the election of Sean O’Brien in place of James Hoffa — who was pushing 80 at the time.

Despite Hoffa’s reputation, O’Brien is a sharp critic of his policies and frequently claimed that Hoffa was not a strong negotiator at the collective bargaining table. “If we’re negotiating discounted contracts and we’re negotiating lousy deals, why would any member, anyone, want to join the Teamsters union?” he said during his campaign.

Nevertheless, one of the first items up for O’Brien’s consideration is the Amazon question. The e-commerce giant, which has come under fire in recent years for their horrific treatment of their workers, is a prime breeding ground for the Teamsters — who are notorious for collectively bargaining for their beleaguered workers.

Some former Teamsters believe that without James Hoffa’s leadership and direction, there’s very little that can be done to entice Amazon workers to join their ranks. Recent events, however, have proven them to be wrong.

Amazon workers in the greater New York area are petitioning Amazon warehouses for union representation. As of February 2022, CNBC reports that a second warehouse in Staten Island has petitioned Amazon for Teamster representation. And this proves that, indeed, there is a life with the Teamsters above and beyond the Hoffa name.

Now that you’ve learned all about James Hoffa, Jimmy Hoffa’s son, read all about Frank Sheeran, who claimed to have killed Jimmy Hoffa — despite having no proof. Then, learn about the history of labor unions in America.