Quentin Roosevelt responded to the call of duty and fought during World War I, but the former president's son was tragically shot down over France on July 14, 1918. 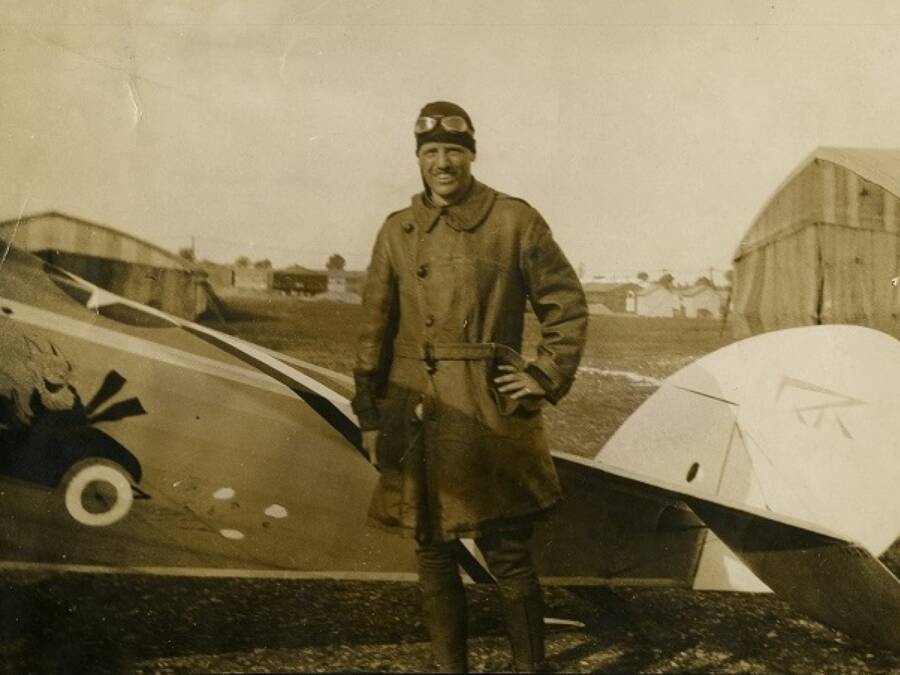 Sagamore Hill National Historic SiteQuentin Roosevelt in 1918, the year he died at the age of 20 in France.

In one of the last letters that Quentin Roosevelt ever wrote, he told his parents about the morbid thrill of war. His squadron had lost a man, he said, but the “excitement” of conflict made up for it. Just three days after Theodore and Edith Roosevelt read those words, Quentin lost his own life.

His death struck his parents — especially his father — hard. Quentin was their youngest and, by many accounts, Theodore’s favorite child. Before he died at the age of 20, Quentin had lived in the White House, attended Harvard, and fallen in love.

Though Quentin Roosevelt’s life came to an abrupt end in France, he left an impact on his family, the country, and even the world that reverberates to this day.

Born on November 19, 1897, Quentin Roosevelt’s life changed forever on a September day in 1901. Then, President William McKinley was assassinated, elevating his vice president, Quentin’s father Theodore, to the presidency.

Theodore Roosevelt then moved his family — wife Edith and children Alice, Ethel, Ted, Kermit, Archie, and Quentin — into the White House. And it didn’t take Quentin long to make mischief in the Executive Mansion. 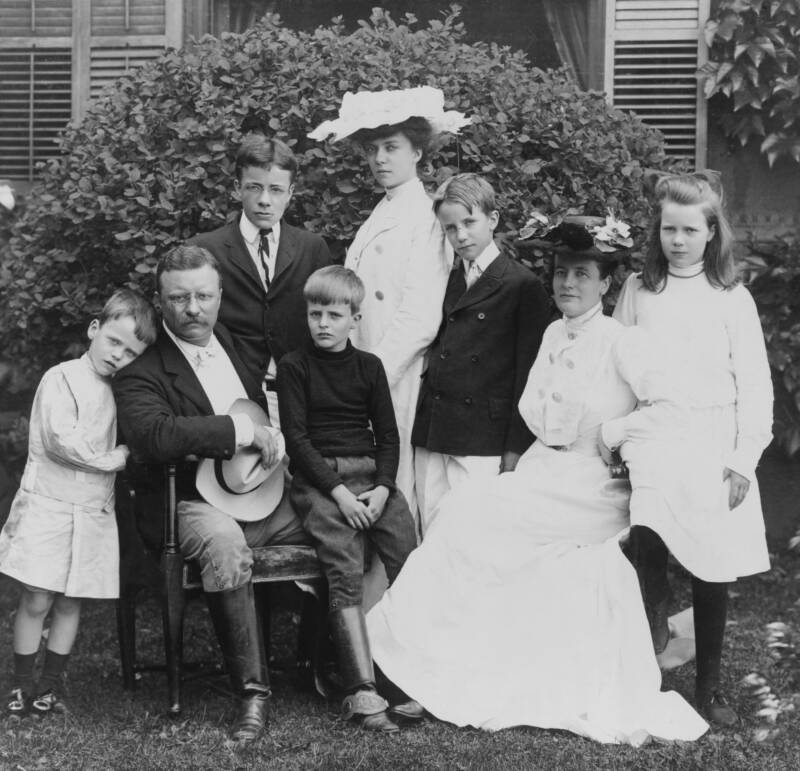 Abetted by a group of young boys known as the “White House Gang,” Quentin carved a baseball diamond on the White House lawn, flung spitballs at presidential portraits, and dropped snowballs on Secret Service agents from the White House roof.

He once rushed into a meeting between his father and the attorney general with three snakes — two in each hand, one wrapped around his body — and snuck his pony up the White House elevator to cheer up his sick brother.

Quentin’s mother fondly referred to him as a “fine little bad boy.” But Quentin wasn’t “bad” at heart. When a woman asked him at a social function how he dealt with “common boys,” Quentin responded mildly: 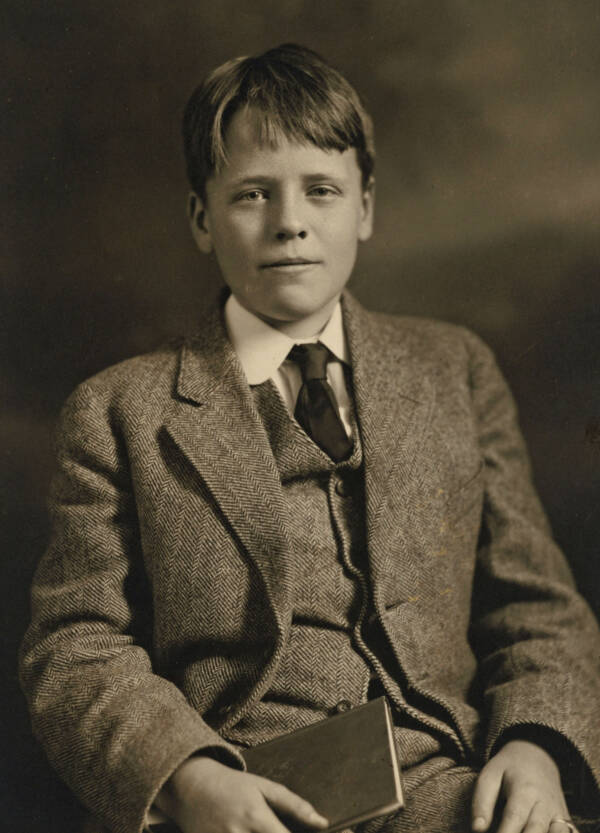 Bright, charming, and with his father’s quick sense of humor, Quentin studied at the prestigious Groton School before matriculating to Harvard. While enrolled there, he met and fell in love with Flora Payne Whitney, the granddaughter of the wealthy railroad magnate Cornelius Vanderbilt.

But war clouds loomed on the horizon. As the First World War unfold in Europe, Quentin wrote to Whitney and expressed his desire for American involvement in the burgeoning conflict.

“We are a pretty sordid lot, aren’t we,” he said, “to want to sit looking on while England and France fight our battles and pan gold into our pockets.”

When President Woodrow Wilson asked Congress for a declaration of war against Germany on April 2, 1917, Quentin decided to drop out of Harvard. Encouraged by his father — all four Roosevelt boys fought in WWI — he volunteered for the U.S. Air Service and shipped off to France in July.

Before he left, Quentin Roosevelt proposed to Flora Payne Whitney. But they’d never see each other again. 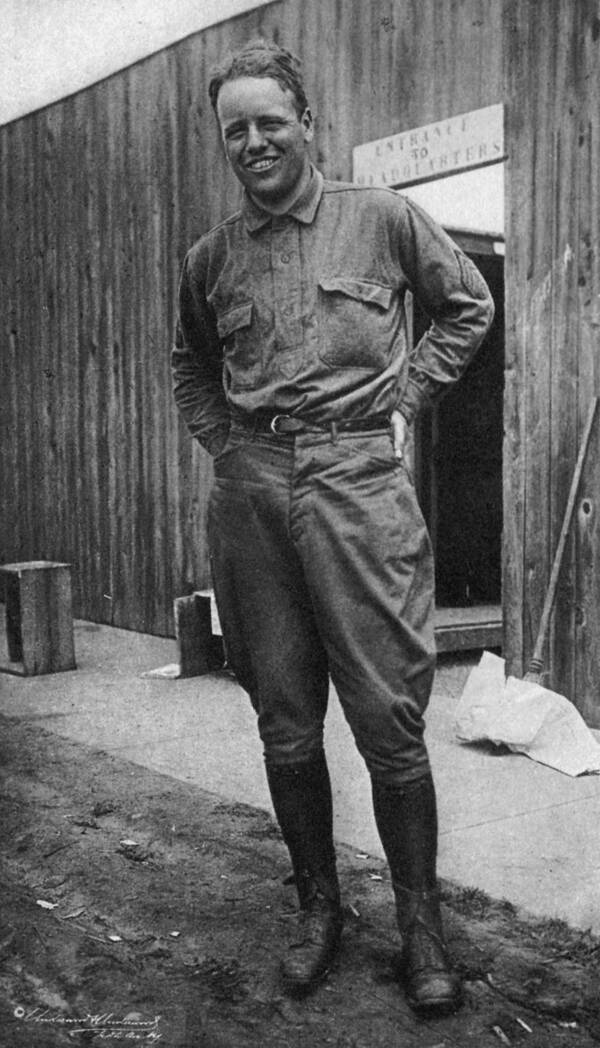 U.S. ArmyQuentin Roosevelt and his three brothers served in World War I, but Quentin didn’t survive the conflict.

For Quentin Roosevelt, life in France could be difficult. His older brothers — already on the front lines — mockingly called him as a slacker as he lingered in flight training. And Quentin disliked that some people thought he’d only gone to war for publicity.

“I owe it to the family — to father, and especially to Arch and Ted who are out there already and facing the dangers of it,” Quentin wrote his mother about his wartime service.

Still, he maintained his cheerful sense of humor. Writing to Whitney, Quentin described how his plane grew cold at high altitudes. He quipped: “Aviation has considerably altered my views on religion. I don’t see how the angels stand it.”

He earned the respect of his fellow soldiers, too. On one occasion, Quentin battled on their behalf with a captain who didn’t want to give the men rubber boots. Without leveraging his famous name, Quentin managed to get the boots.

And by June 25, 1918, Quentin Roosevelt happily told his mother that he’d be going to the front lines.

Tragically, it was one of the last letters he’d ever write. On July 14, 1918, Quentin took to the sky with other American pilots to offer air support during the Second Battle of the Marne. But as he and his unit finished their mission, seven German planes appeared out of the fog.

“About a half a mile away I saw one of our planes with three Boche on him, and he seemed to be having a pretty hard time with them,” recalled Lt. Edward Buford Jr, who flew with Quentin that day.

“So I shook the two I was maneuvering with and tried to get over to him, but before I could reach them, [his] machine turned over on its back and plunged down out of control.”

Quentin Roosevelt went down behind German lines outside of Chamery, France. The Germans, shocked to learn that they’d killed the son of a president, gave Quentin a funeral. According to an American prisoner of war, one thousand Germans soldiers lay him to rest beneath a wooden cross, held together with wires from his plane. 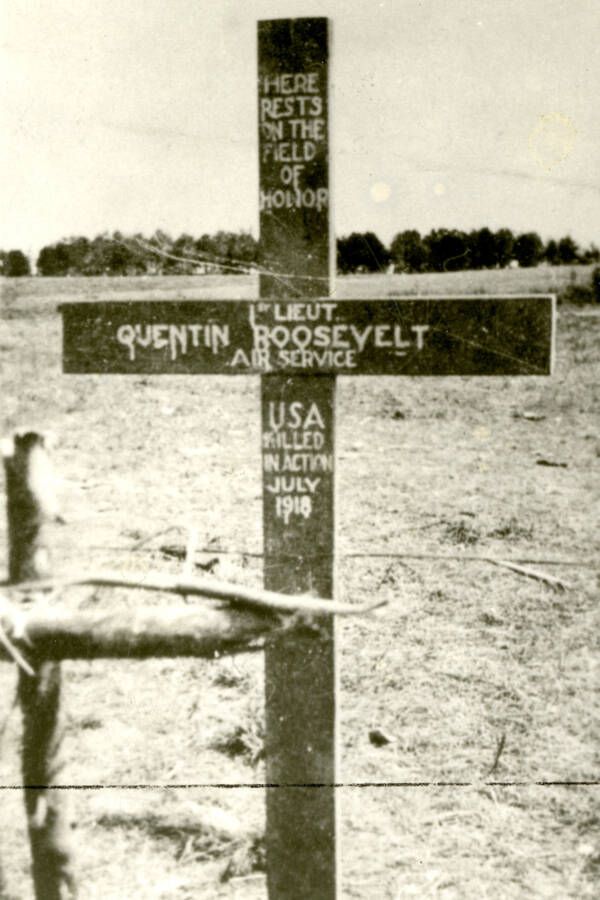 National Museum of the United States Air ForceThe Germans marked the spot where Quentin Roosevelt had died with a simple cross.

Shortly thereafter, American troops managed to push the Germans back. They replaced Quentin’s cross with another, and the French erected a fence around his grave. Back home, his parents mourned their loss.

“Quentin’s mother and I are very glad that he got to the front and had a chance to render some service to his country,” Theodore Roosevelt told a reporter. “And show the stuff that was in him before his fate befell him.”

The Tragic Legacy Of Quentin Roosevelt 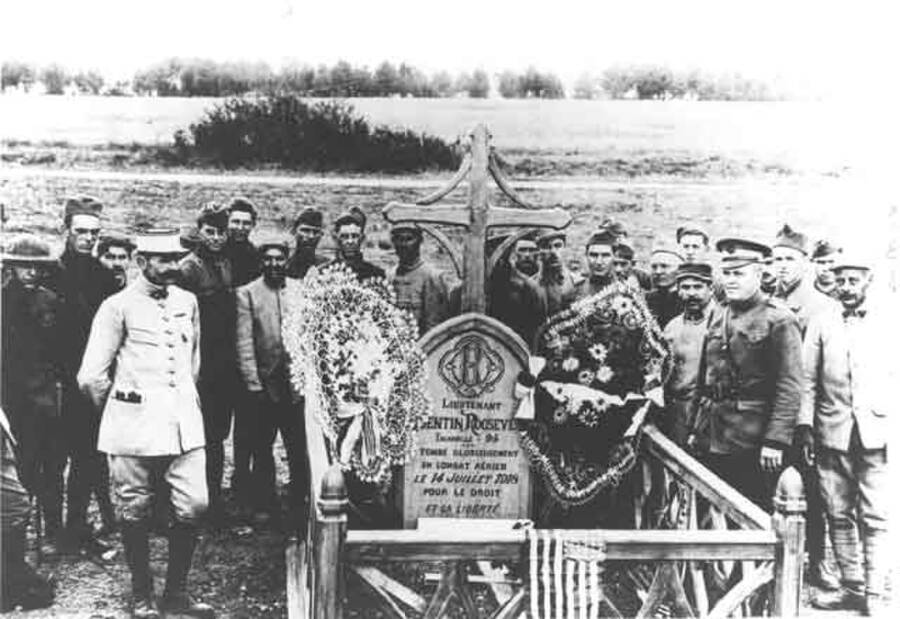 Quentin Roosevelt’s death impacted his family, his country, and even the world at large. Theodore Roosevelt mourned the loss of his son and felt guilty about his death.

Americans across the country mourned Quentin, too. One town in Pennsylvania even changed its German-sounding name, “Bismark,” to “Quentin.”

“We think of gallant, modest Quentin as typical of all Americans,” wrote one St. Louis columnist. “As the flower and fruit of the patriotism a lax generation first awoke to at his father’s call … he stands for all the fallen upon whom no public glory falls.”

Quentin Roosevelt’s death even had international consequences. After his plane went down, the Germans took a photo of his crumpled body for propaganda. Instead, it highlighted the sacrifice of an American president. Germans noted that their Kaiser’s sons served far from the front lines. 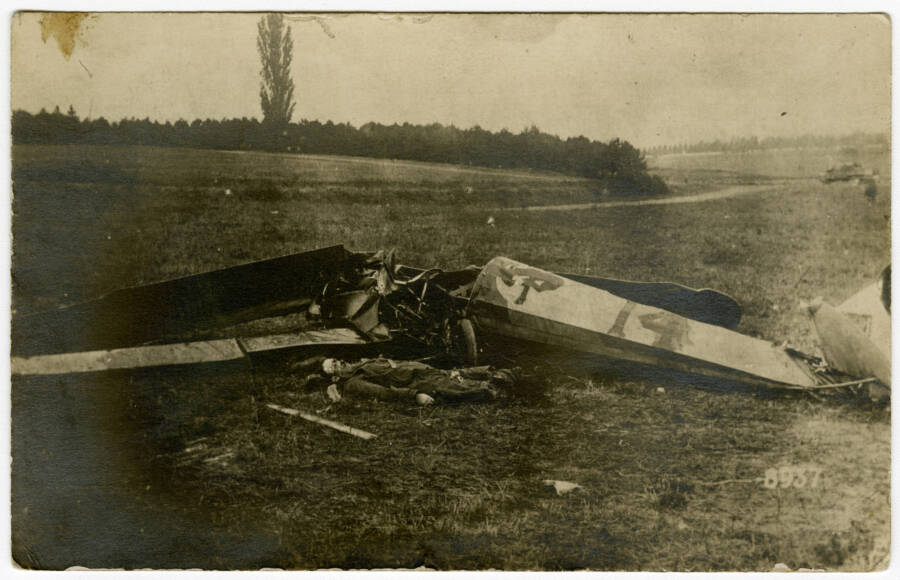 Public DomainThis photo of Quentin Roosevelt’s body was meant to be propaganda but backfired. Even the Roosevelts kept it in their family scrapbooks.

But ultimately, Quentin Roosevelt’s death was a family tragedy. When WWI ended, a reporter asked Theodore Roosevelt if he had a message for the French. “I have no message for France,” the former president replied. “I have already given her the best I had.”

Bowed by grief, Theodore Roosevelt died just six months after his son did.

Quentin’s body remained in France, per his parents’ wishes. “We feel that where the tree falls, there let it lie,” his father wrote.

But after his brother Theodore died of a heart attack following the invasion of Normandy in World War II, the Roosevelt family decided to lay the brothers to rest together. Quentin’s body was exhumed and reburied next to Theodore’s at the American cemetery at Colleville-sur-Mer.

Quentin Roosevelt left behind a legacy of service, patriotism, and sacrifice. To date, he’s the only child of an American president to ever die in combat.