A down-and-out dockworker, James J. Braddock shocked America when he took the world heavyweight champion title from Max Baer in a legendary boxing match in 1935. 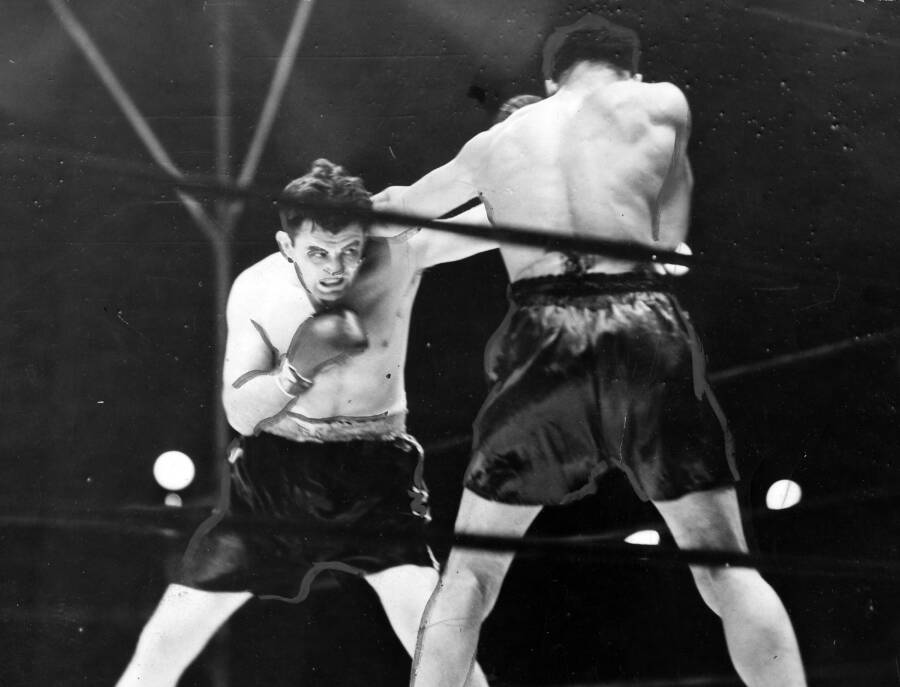 James J. Braddock added that middle initial himself. Though he was actually named James Walter Braddock, he dreamt of following in the footsteps of boxing champs like James J. Corbett and James J. Jeffries. While that triumph as heavyweight boxing champion eventually came to pass, his journey was nothing short of hellish.

With a stunning record throughout the mid-1920s, Braddock was climbing his way up to the title fight of his dreams. Mere months before the stock market crash of 1929, however, he lost a crucial bout that would’ve gotten him there — and fractured his right hand in several places. His chronic injuries never seemed to heal.

Rendered unemployable as a fighter, James Braddock lived in a New Jersey basement with his wife and three kids. He worked the docks and coal yard, tended bar, and moved furniture to feed them. He owed everyone from landlord to milkman, however, and could only afford bread and potatoes. One winter, his electricity was cut off.

Braddock spent years asking his manager Joe Gould to get him another shot at the title. It finally arrived on June 13, 1935, when heavyweight champion Max Baer agreed to defend it. In one of the greatest upsets in boxing history, Braddock dethroned Baer, found fame — and became a folk hero for the Great Depression.

James Walter Braddock was born on June 7, 1905, in Hell’s Kitchen in New York City. His parents Elizabeth O’Tool and Joseph Braddock were both immigrants of Irish descent. Braddock took his first breath on West 48th Street — mere blocks from Madison Square Garden where the world would eventually learn his name. 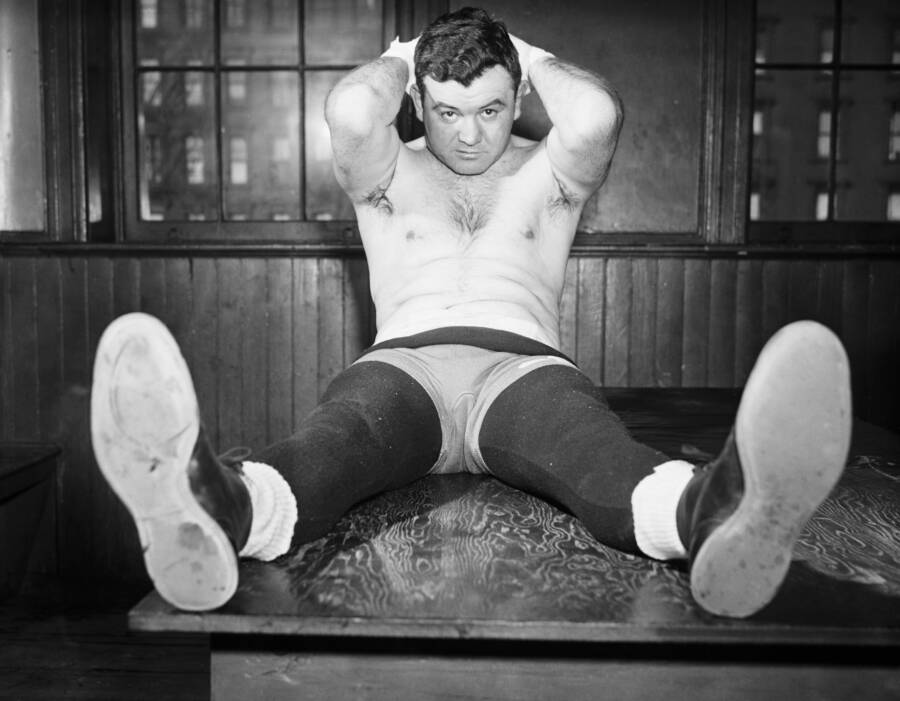 The family relocated to North Bergen, New Jersey, after Braddock was born. He was one of seven siblings but had higher ambitions than most. Braddock dreamed of attending the University of Notre Dame and playing football, but coach Knute Rockne ultimately passed on him. Braddock thus firmly focused on boxing.

James Braddock had his first amateur fight at 17 and turned professional three years later. On April 13, 1926, the 160-pound middleweight climbed into the ring at Amsterdam Hall in Union City, New Jersey, and fought Al Settle. At the time, the winner was typically chosen by attending sportswriters. This one ended in a draw.

Critics later noted that he wasn’t the most skilled boxer, but had an iron chin that took extended punishment and wore his opponents out. Braddock steadily rose in the ranks to build a record of 33 wins, four losses, and six draws by November 1928 — when he knocked out Tuffy Griffiths in an upset that stunned the sport.

James J. Braddock lost his next fight but won the following three. He was now one bout away from challenging Gene Tunney for the title. He had to defeat Tommy Loughran to do so, however. He not only lost that fight on July 18, 1929, but fractured the bones in his right hand — and would spend the next six years fighting for his life.

While the decision against James Braddock had been narrow, most critics felt he had squandered his one chance at the title. The cast on his hand served as a reminder of that notion, as did Gould’s increasing difficulty in finding Braddock another fight. Ultimately, however, the American economy became his biggest challenger. 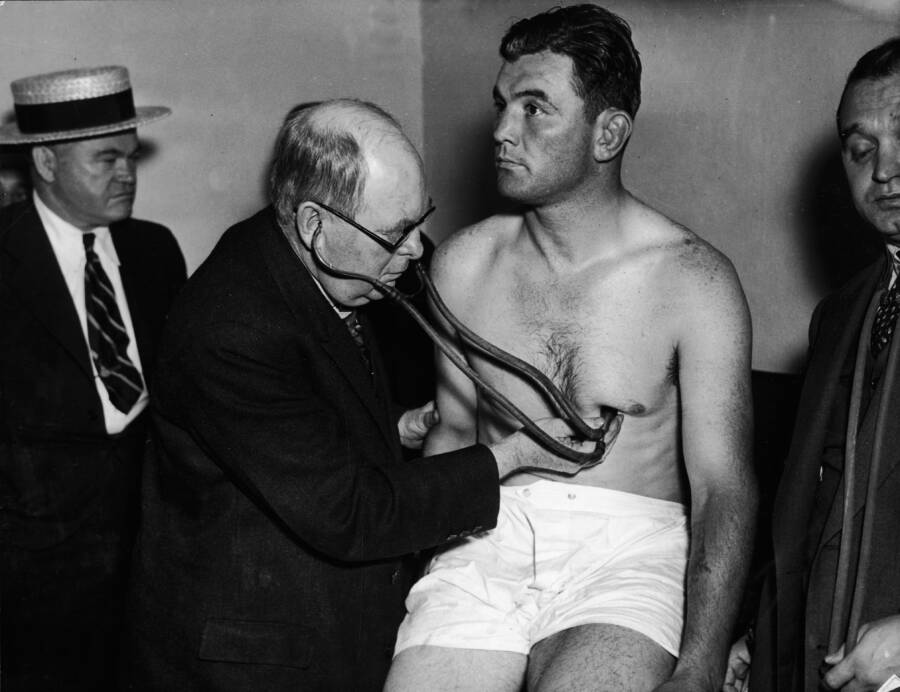 FPG/Getty ImagesJimmy Braddock receiving a medical checkup the night before his fight against Max Baer.

On Oct. 29, 1929, Black Tuesday sent the United States tumbling into the Great Depression. Wall Street investors had traded 16 million shares on the New York Stock Exchange in one day, with thousands of investors losing everything — as billions of dollars vanished. The Roaring Twenties were now over, and desperation set in.

Braddock didn’t know it yet, but his recent loss was only the first of 20 over the next four years. He also got married to a woman named Mae Fox in 1930 and spent every waking hour trying to provide for their three young children. When he broke his hand fighting Abe Feldman on Sept. 25, 1933, he gave up on boxing.

James Jr., Howard, and Rosemarie Braddock didn’t know anything but poverty. For their father, life in a cramped basement in Woodcliffe, New Jersey, was no life at all. Desperate for cash, Braddock regularly walked to the local docks to find work as a longshoreman. When he did, he earned four dollars per day.

Braddock spent the rest of his time cleaning people’s basements, shoveling driveways, and sweeping floors. In the winter of 1934, however, he couldn’t pay rent nor the milkman. When his electricity was cut off, one of his loyal friends lent him $35 to get his affairs in order. Braddock did, but was immediately broke again. 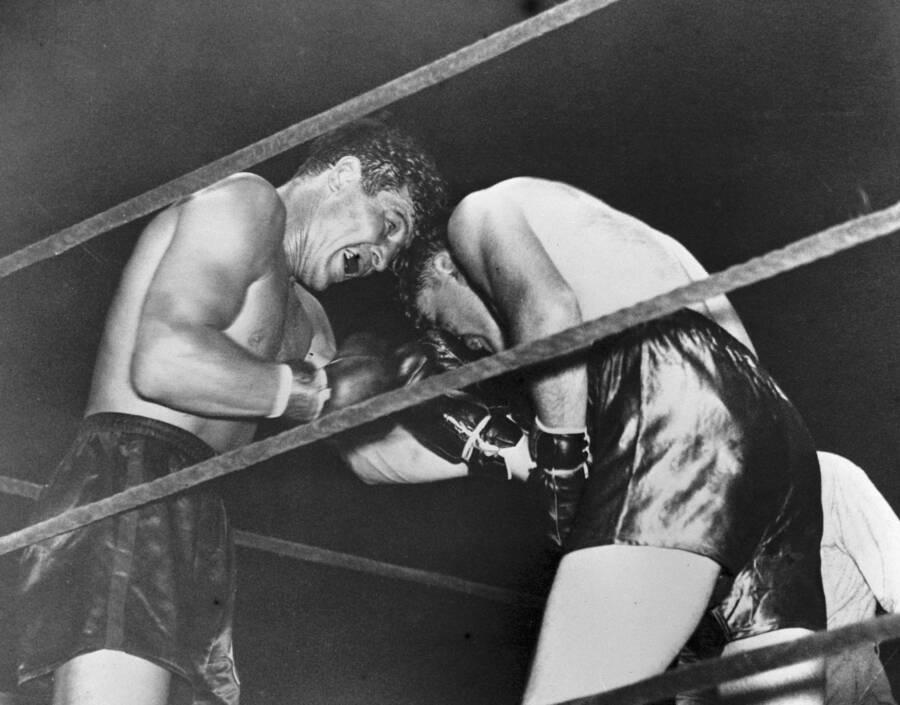 While he relied on government relief for the next 10 months, things looked up when fighter John Griffin was desperate for a local name to fight. Miraculously, Braddock knocked him out in the third round, only to then defeat John Henry Lewis — and regain his shot at the title after beating Art Lasky and breaking his nose.

Contracts for the heavyweight title fight were finalized on April 11, 1935. James Braddock and Joe Gould were to split $31,000 if the fight made more than $200,000. While certainly appealing, Braddock was most interested in winning. Fortunately for him, defending champion Max Baer thought of him as an easily beatable opponent.

Even the odds suggested as much, as they ranged from six-to-one to 10-to-one for Baer. It certainly looked bad for Braddock when the opening bell dinged at Madison Square Garden on June 13. The 29-year-old was three years older than Baer and endured a powerful parade of punches that evening.

He was ultimately only in shape from his work at the docks but knew how to take a punch. His iron chin never wavered, and eventually, Baer grew tired. To the shock of all spectators at Madison Square Garden that night, Braddock won 12 of 15 rounds and became heavyweight champion of the world in a unanimous decision by the judges. 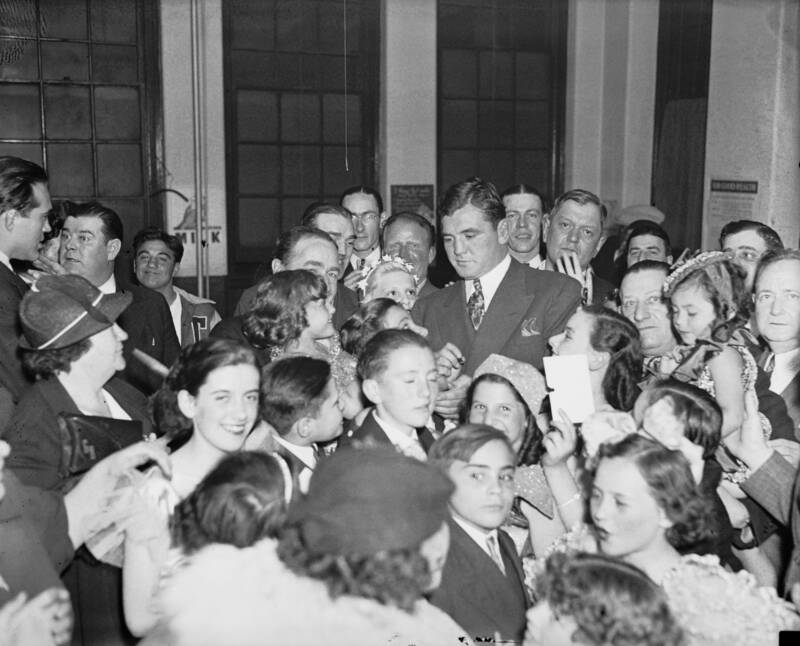 As dramatized in Ron Howard’s 2005 film Cinderella Man, he had risen from an impoverished dock worker to a nationwide celebrity. While he lost the title to Joe Louis in 1937, he lived a full life. Braddock joined the Army in 1942 and served in the Pacific, only to return as a surplus supplier who helped built the Verrazano Bridge.

While Jimmy Braddock was seen as a national folk hero until his death at 69 years old on November 29, 1974, his true reward was that he was now considered in the same league as his idols — with his fight against Baer commonly described as “the greatest fistic upset since the defeat of John L. Sullivan by Jim Corbett.”

After learning about James J. Braddock, read about Bill Richmond, the freed slave who became a boxer. Then, take a look at inspiring pictures from the life of Muhammad Ali.