Inside The Jane Collective, The Underground Abortion Network That Helped Thousands Of Chicago Women Before Roe V. Wade

The Jane Collective helped more than 10,000 Chicago-area women get safe, affordable abortions between 1969 and 1973 while dodging law enforcement along the way. 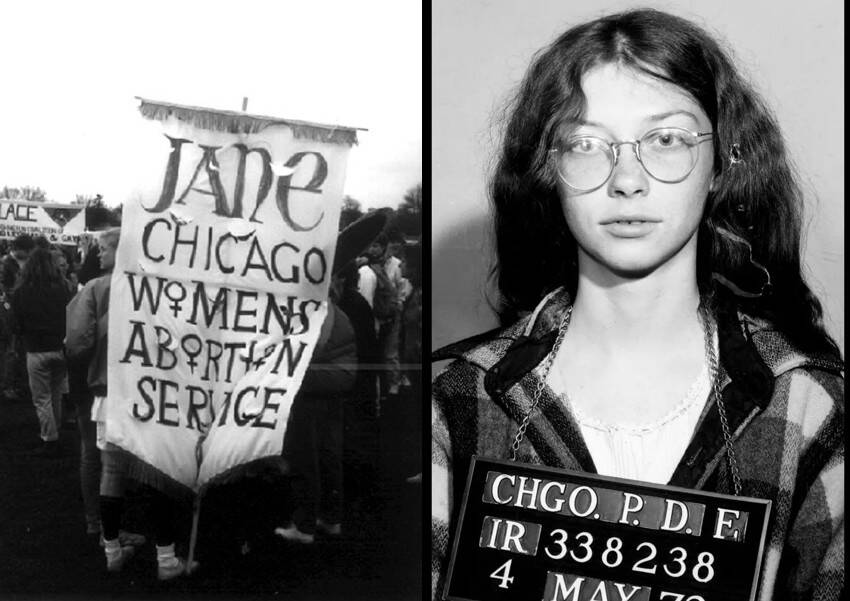 abortionfilms.org/HBOThe Jane Collective promised safe, low-cost abortions in a time when doing so was illegal.

This advertisement stood out on the pages of Chicago’s underground papers. It was a time before 1973 when abortion was illegal. But “Jane” promised to help regardless of the consequences.

Jane was not one person — instead, it was a group of women who helped people with unwanted pregnancies in an era before abortion was legal.

Patients would call and leave a message, indicating that they had been referred by a trusted source. Then, Jane members would call back, obtain a basic medical history, note details of the pregnancy, and assign each woman to a Jane counselor. The counselors would then explain the rest of the process, answer any lingering questions, and schedule the procedure.

At their appointed time, patients would come to “the Front,” an apartment that served as a reception area. They would then be driven to “the Place” where other Jane members performed the abortions.

The women would then be taken back to the Front, where they were given painkillers to take home. Over the next few days, their counselors would call to check-in and make sure there were no complications.

The Janes knew they were breaking the law. But they believed reproductive freedom was worth the price.

The Founding Of The Jane Collective 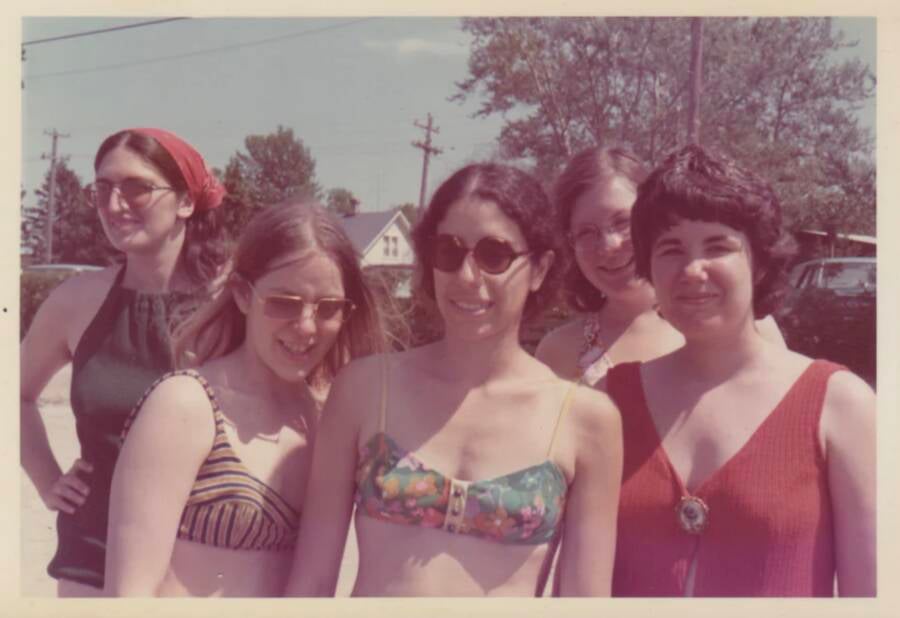 HBOMembers of the Jane Collective in the late 1960s.

A founding member of the Collective, Heather Booth, was a student at the University of Chicago in 1965 when the seeds of her organization were planted. That year, she helped a pregnant friend who was “nearly suicidal” get an abortion.

It wasn’t long before someone else called Booth in a similar situation. “Word must have spread,” she said, according to Harper’s Magazine. The number of women desperate for help overwhelmed Booth. From her dorm room, she created the Jane Collective.

“I told people to call and ask for Jane,” Booth recalled. She recruited others to answer the phone and direct callers to a local abortion provider. Soon, the Jane Collective grew into a group of 30 women.

The operation quickly outgrew the dorm room. Members instead borrowed apartments from friends and supporters. The so-called Janes moved locations frequently, aware that they were breaking the law. 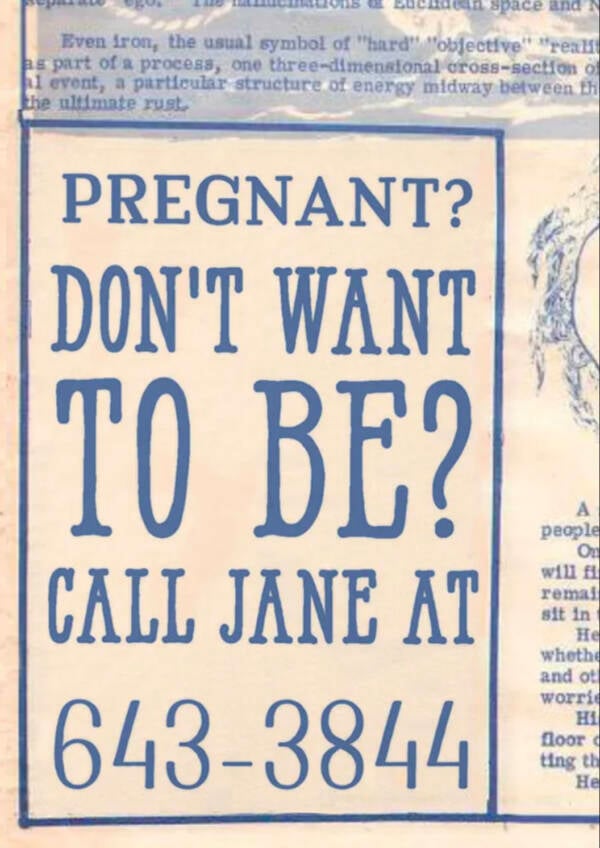 Planned ParenthoodThe Jane Collective placed ads in Chicago newspapers that urged women to “Call Jane” if they needed an abortion.

At the Front, Janes would greet women and offer tea and snacks. “We would explain exactly what the procedure was, how it worked, what the instruments were that would be used, and what they could expect,” Jeanne Galatzer-Levy, a member of the Jane Collective, explained.

In the early years, Dr. T.R.M. Howard, a Black civil rights activist, performed the procedure. But after he died, the Janes found another provider who wanted patients to wear blindfolds during the entire procedure to keep his identity hidden.

While the Janes convinced him to end this practice, they learned around 1970 that this provider wasn’t a doctor at all but a medic in the Korean War. “If he can do it and he’s not a doctor, then we can do it, too,” declared one of the Janes. So the Jane Collective members learned how to perform abortions themselves. 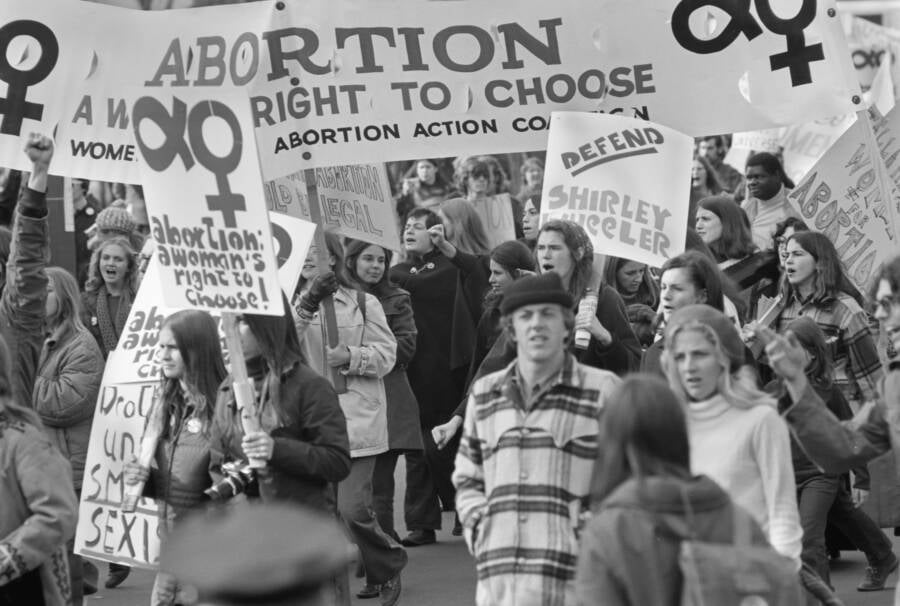 In pre-Roe Chicago, male abortion providers charged $600-$1,000 for the procedure, as reported by The New York Times. This made it almost entirely inaccessible, except to a small portion of women. But once the Janes began providing abortions, they charged only $100 — or even less when women couldn’t afford it.

Despite the necessity of their services, the Janes were in danger not only because abortions were illegal, but because they were infringing on the mob’s turf. Before legal abortions, the Chicago mob monopolized underground ones. But even this didn’t stop the Janes.

“Most political work is very, very slow,” said Galatzer-Levy. “You have to keep telling yourself that things will get better. It’s one step forward and half a step back. This was not like that. We could just do it. There was a problem and we could solve it.”

After each procedure, the Janes connected patients with a local gynecologist for an exam, who attested to the success of their organization.

“From my examinations, these women were not maltreated and had no ill effects,” one gynecologist said of the Jane Collective’s patients.

“They were in good health; they had no complaints. All that says is that one does not need to be a doctor. You only need good training to do an abortion.”

The Arrests Of The “Jane Seven” — And Their Release After Roe V. Wade 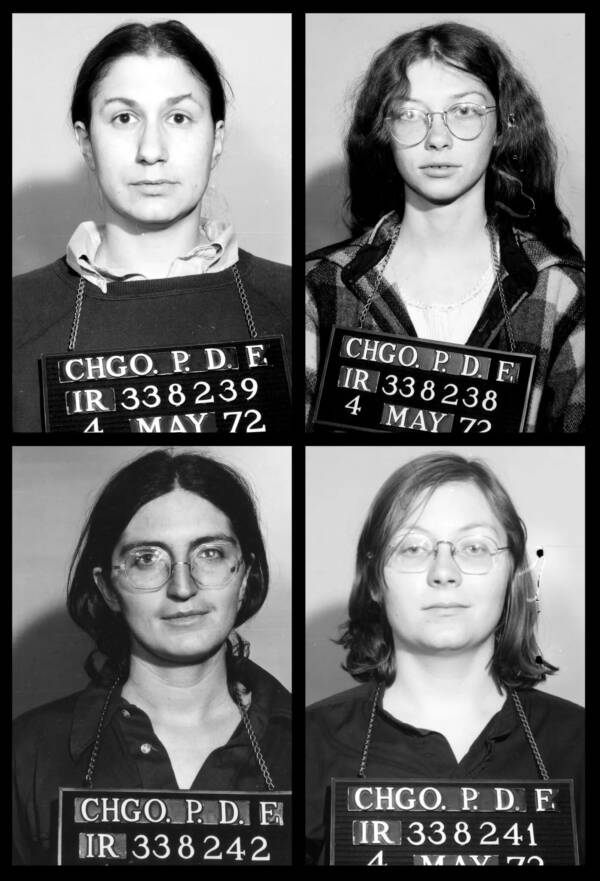 But then, disaster struck the Jane Collective in May 1972. Police raided the Front, yelling, “Where’s the doctor?” It was apparently unthinkable to them that the women were performing the abortions.

As the police van carried them off, the Janes ripped up the index cards that listed their patients’ information. They swallowed the pieces. Police soon ran into another problem — no one would testify against the Janes.

Meanwhile, as the women awaited trial, the Supreme Court debated Roe v. Wade which, when the decision came down in January 1973, legalized abortion. The courts consequently dropped the case against the Janes.

The legalization of abortion saved the Jane Seven from prosecution and it also ended the need for the Jane Collective. Within weeks, legal abortion clinics opened in Chicago.

Several Janes considered working in the clinics, but legalized abortion brought new safety regulations, and the Janes could not practice medicine without a license.

In 1973, members of the Jane Collective had a farewell party. Abortion was no longer a dangerous, underground procedure banned by law. So the Janes could disband.

The Legacy Of The Jane Collective 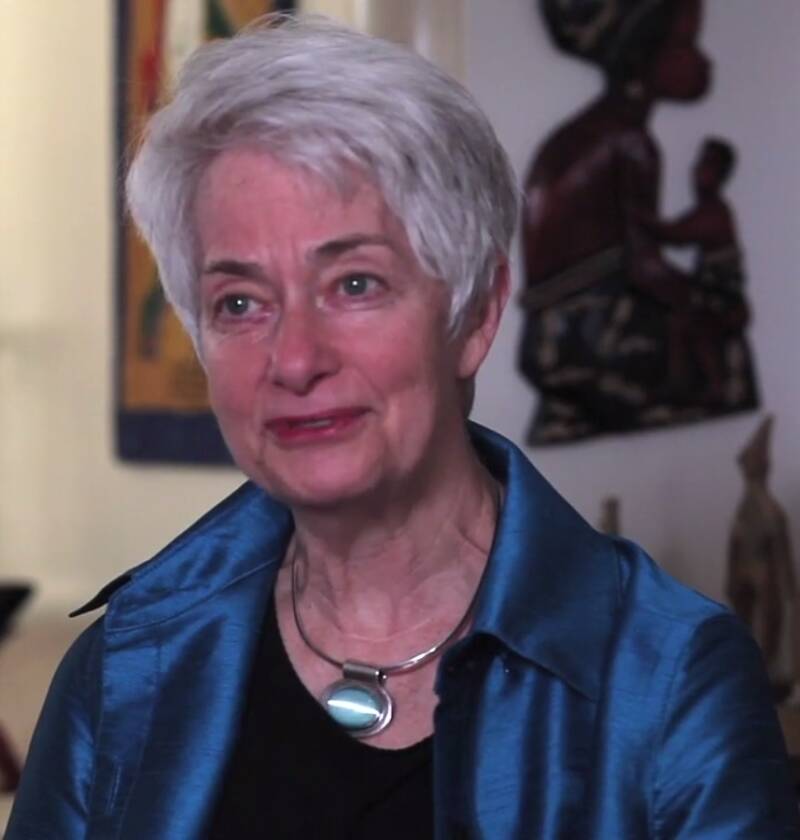 Wikimedia CommonsHeather Booth in a 2018 documentary on the Jane Collective.

Looking back on her organization, Heather Booth said in a 2018 interview with VICE that “I’m actually a very law-abiding person. I try not to litter, I cross at the green … [But] sometimes there are unjust laws, and in the face of an unjust law, you need to take action to challenge it.”

That’s exactly what the Jane Collective had done. The organization helped an estimated 11,000 women obtain safe and affordable abortions. “Some of them had terrible stories,” recalled former Jane Judith Arcana. “There was a fifteen-year-old, for example, who had been raped and was in her second trimester.”

Others were like Jenny — a pseudonym — who had cancer. Without an abortion, she might die. In the pre-Roe era, Jenny had to petition a board to allow the abortion because pregnancy endangered her life.

“Through that whole experience, there wasn’t one woman involved,” Jenny recalled. “It was men — the doctors, the hospital board — controlling my reproductive rights and condemning me to death.”

After barely obtaining an abortion, Jenny went on to join the Jane Collective and learn how to provide abortions for others.

The Jane Collective was formed to help women and save lives. And Jane’s legacy continues today. “It’s not just about something interesting that happened in the past,” says Booth. “It’s actually relevant to today.”

Indeed, Booth never thought she would live to see abortion banned again. She has advice for those protecting reproductive freedom today. “We need to organize on the issues in our communities and be organized politically to make our voices heard.”

After reading about the Jane Collective, learn about the life of Norma McCorvey, the Jane Roe in the Roe v. Wade case. Then, take a look at the inspiring story of Constance Baker Motley, the first Black woman on the federal bench.