Behind The ‘Happy Little Trees’: The Surprising Story Of Bob Ross

This Bob Ross biography reveals the remarkable story of the Air Force Master Sergeant who would go on to teach millions the joy of painting.

In the early 1980s, Bob Ross quietly appeared on public television stations across the United States to give viewers an experience that was part art lesson, part entertainment, and part pro bono therapy session.

Over the course of more than 400 26-minute episodes, Ross taught his painting technique to millions of viewers, most of whom weren’t especially interested in learning how to paint for themselves, but who were mesmerized by Ross’ hypnotic smoothness and trademark permed hair.

He effortlessly daubed whole landscapes into existence on the canvas, talking the whole time about soothing topics and encouraging his novice viewers to discover their own inner artists. Even those in his audience who never picked up a brush still found the show oddly calming, and many reacted with real grief when their icon unexpectedly died of cancer in 1995.

Despite his high ratings and devoted fan base, however, Bob Ross lived a very private life and rarely spoke about himself. There remains a lot that isn’t known about the man who coined the term “happy little trees.”

This biography of Bob Ross reveals what we do know about the artist.

The Early Life Of Bob Ross 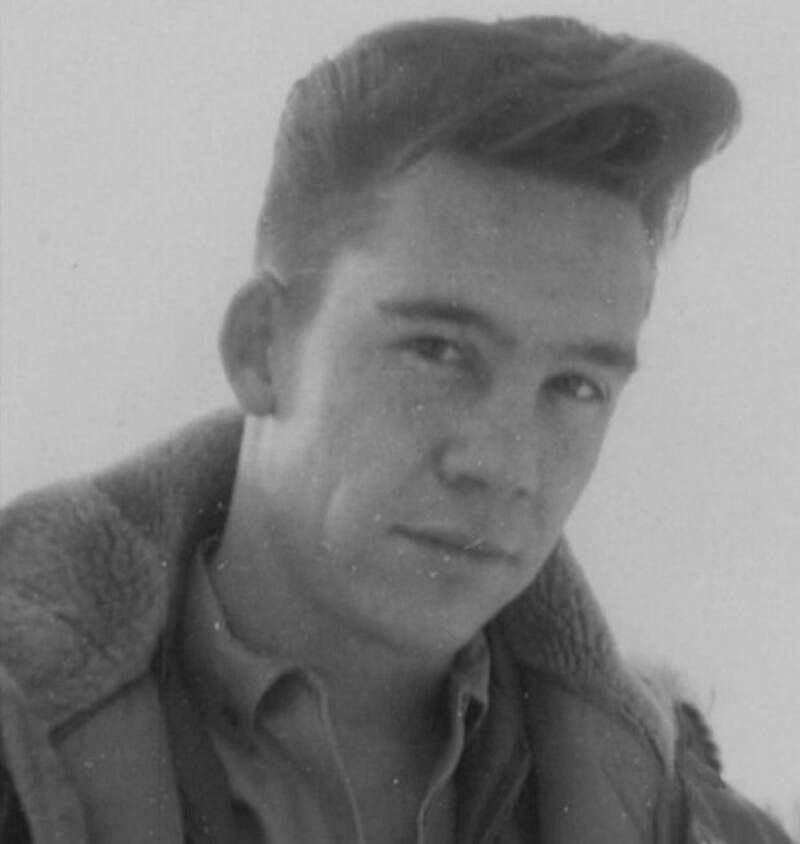 Bob Ross was born in Daytona Beach, Florida, on October 29, 1942. His father was a carpenter. As a child, the young Ross always felt more at home in the workshop than he did in a classroom. Ross never shared too many details about his early years, but he did drop out of school in the ninth grade. It’s believed that he then worked as his father’s assistant.

An accident in the shop cost him the tip of his left index finger around this time. He seems to have been self-conscious about the injury; in later years he would position his palette in such a way as to cover the finger.

In 1961, at age 18, Ross joined the U.S. Air Force and was assigned to an office job as a medical records technician. He then spent 20 years in the military.

Much of Bob Ross’ time in the Air Force was spent at the Air Force Clinic at the Eielson Air Force Base near Fairbanks, Alaska. He performed well enough to eventually become a master sergeant, but this led to a problem.

As Ross later explained in an interview with the Orlando Sentinel: “I was the guy who makes you scrub the latrine, the guy who makes you make your bed, the guy who screams at you for being late to work. The job requires you to be a mean, tough person. And I was fed up with it. I promised myself that if I ever got away from it, it wasn’t going to be that way anymore.”

Feeling that his job ran against his natural temperament, he swore that if he ever left the military he’d never shout again. To lift some of the strain he was under, and to make a little extra money, Ross took up painting.

How A Master Sergeant Became A Master Painter 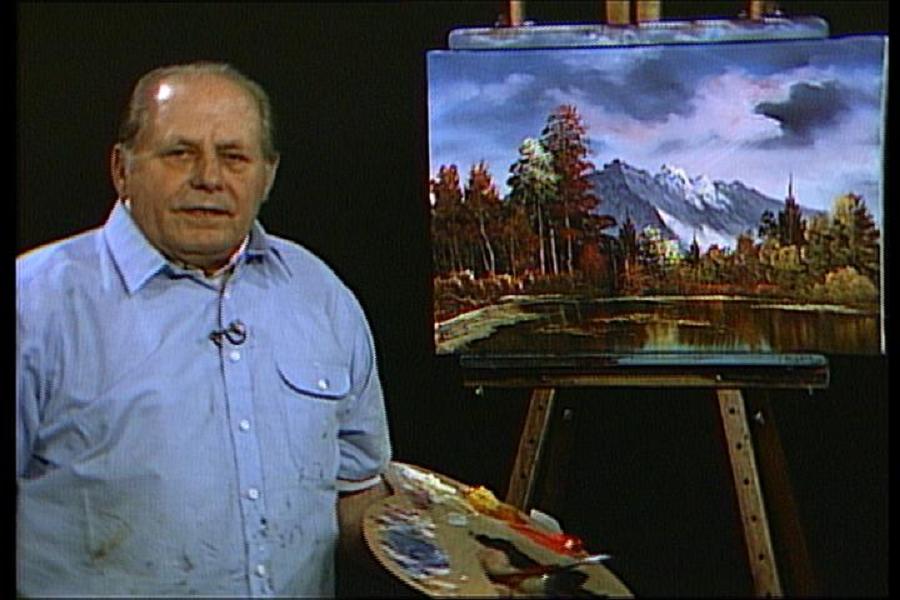 Wikimedia CommonsBob Ross’ mentor, Bill Alexander, on the set of his own public television painting show.

While residing in Alaska, Ross could hardly have chosen a better place to start painting landscapes. The area around Fairbanks features mountain lakes and pristine forests full of snow-dappled trees, all of them practically begging to be rendered in titanium white. These landscapes inspired Ross throughout his career, even after he moved back to Florida.

According to Biography, while Bob Ross was teaching himself to paint — and to do it quickly so that he could finish a painting in a 30-minute period — he found a teacher who would teach him what became his trademark style.

William Alexander was a former German prisoner-of-war, who moved to America after his release at the end of World War II and took up painting for a living. Late in life, Alexander claimed to have invented the style that he taught Ross, popularly known as “wet-on-wet,” but it was actually a refinement of a style that was used by Caravaggio and Monet.

His technique involved rapidly painting layers of oil over each other without waiting for the picture elements to dry. To a busy man like Master Sergeant Bob Ross, this method was perfect, and the landscapes that Alexander painted perfectly matched his preferred subject matter.

Ross first came across Alexander on public television, where he hosted a painting show from 1974 to 1982, and he eventually traveled to meet and learn from the man himself in 1981. After a short time, Ross decided he’d found his calling and retired from the Air Force to paint and teach full time. 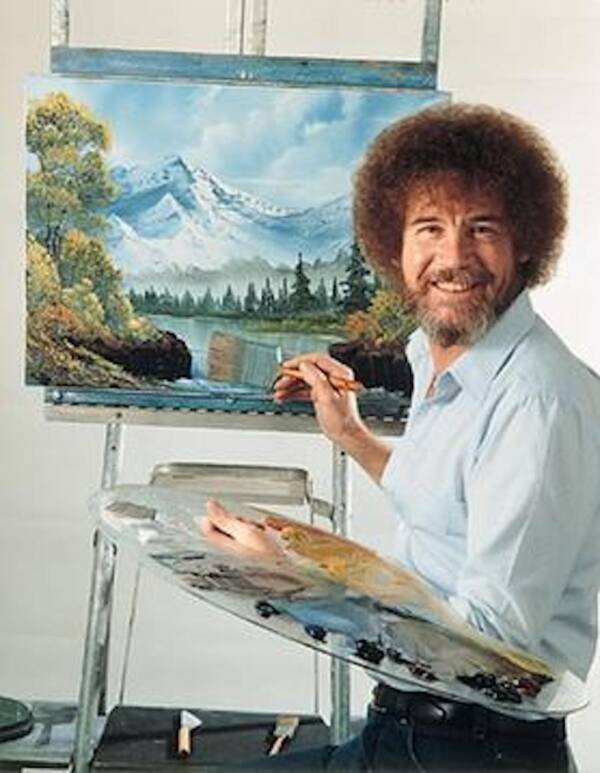 Wikimedia CommonsBob Ross first started perming his hair as a way to save money on haircuts.

Despite his obvious talent as an artist, Ross’ early years as a painter were lean ones. Being William Alexander’s star pupil didn’t pay very well, and the few paid lessons that he managed to arrange barely covered the bills.

According to NPR, Ross’ longtime business manager, Annette Kowalski, said that his famous hairdo was a result of his money problems: “He got this bright idea that he could save money on haircuts. So he let his hair grow, he got a perm, and decided he would never need a haircut again.”

Ross actually disliked the hairstyle, but by the time he had the money for regular haircuts, his perm had become an integral part of his public image and he felt that he was stuck with it. So he decided to keep his curls.

By 1981, he (and his hair) had filled in for Alexander on his show. When Kowalski traveled to Florida to meet Alexander, she met Ross instead.

At first, she was disappointed, but as Ross began painting and talking in his soothing voice, Kowalski, who had recently lost a child in a car accident, found herself swept away by his calm and relaxing demeanor. Approaching him after the class, she suggested a partnership and a promotional deal. Ross agreed. And before long, he was on his way to pop culture stardom.

Why The Joy Of Painting Took Off 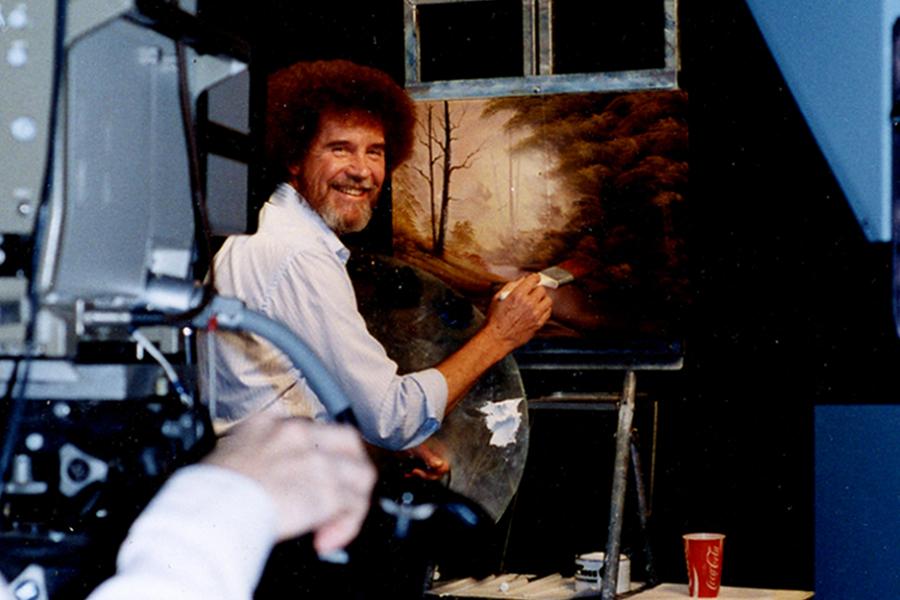 WBURRoss filmed more than 400 episodes of The Joy of Painting. He actually painted at least three different versions of each work for every show — but viewers only saw one of those paintings on-screen.

The Joy of Painting aired for the first time on PBS in January 1983. In the first of what would be hundreds of episodes, Bob Ross introduced himself, asserted that everyone has at some time wanted to paint something, and promised his viewers that “you too can paint almighty pictures.”

That colorful turn of phrase was no accident. According to Kowalski, Ross would lie awake at night and practice one-liners for the show. He was a perfectionist, and he ran the show in a very exact and demanding way.

Keeping the promise that he’d made to himself in the Air Force, he didn’t raise his voice — obviously — but he was always very firm about details, from how to light a scene to how to market his paints. He even found time for details like gently sanding his clear plastic palette in order to cut the glare from the studio lights and thus make a less distracting show.

One of the things that made Ross’ show special, apart from his relaxed attitude, was that it grew out of his in-person art classes. Ross was fundamentally a teacher, and the point of his show was to encourage other people to learn to paint, so he always used the same pigments and brushes to make it easy for beginners on a budget to get started for very little money.

He used common house painting brushes and an ordinary paint scraper, rather than specialized tools, and fans of the show who wanted to paint along with him could always be ready to start painting when he did.

Once the show began, it unfolded in real-time, the idea being that the audience could keep up with Ross as he painted his picture. Only the occasional bloopers got cut, such as the regular occasions when Ross pushed too hard on the canvas and accidentally knocked over his easel.

Every painting he did on the show was one of at least three nearly-identical copies. Despite his unstudied air on the show, Ross painted one picture before the show that would be mounted out of sight to act as a reference during the filming process. The second was what the audience saw him paint. And the third was painted later and took much longer — this was the high-quality version that would be photographed for his art books.

How Bob Ross Found Success As An Artist 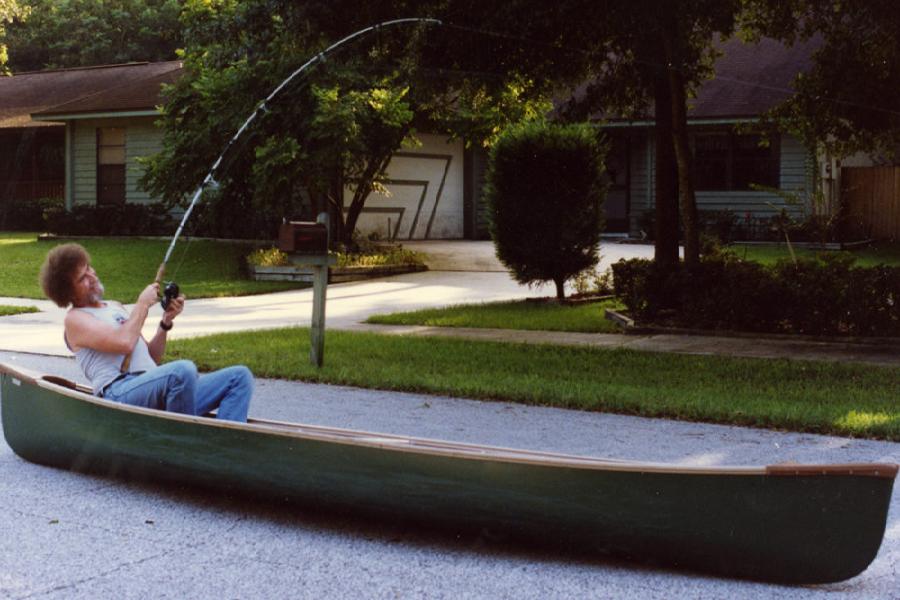 Bob Ross’ books were an important part of his business model, especially when he was just starting out as a painting instructor and hadn’t built up an art-supply line quite yet. Ross decided not to sell his original paintings, though he did sometimes give them away for charity auctions.

Eventually, his PBS show became the centerpiece for what grew into a $15 million business that sold Bob Ross-approved palettes, brushes, and almighty easels. He deliberately kept his line of paints as simple as possible, centered on the eight or so colors he always used on the show. That way, novice painters could jump in and get started right away, without becoming experts in oil paints or getting confused by the selection.

In addition to the supplies, Ross remained focused on teaching his students. Personal lessons could be given for $375 an hour, and gifted students could train to become Bob Ross-certified art instructors.

All over the country, freelance small businesses sprang up as Ross’ successful former students took on students of their own and organized regular classes, albeit for less per hour than Ross himself commanded.

The Legacy Of Bob Ross And The Joy Of Painting 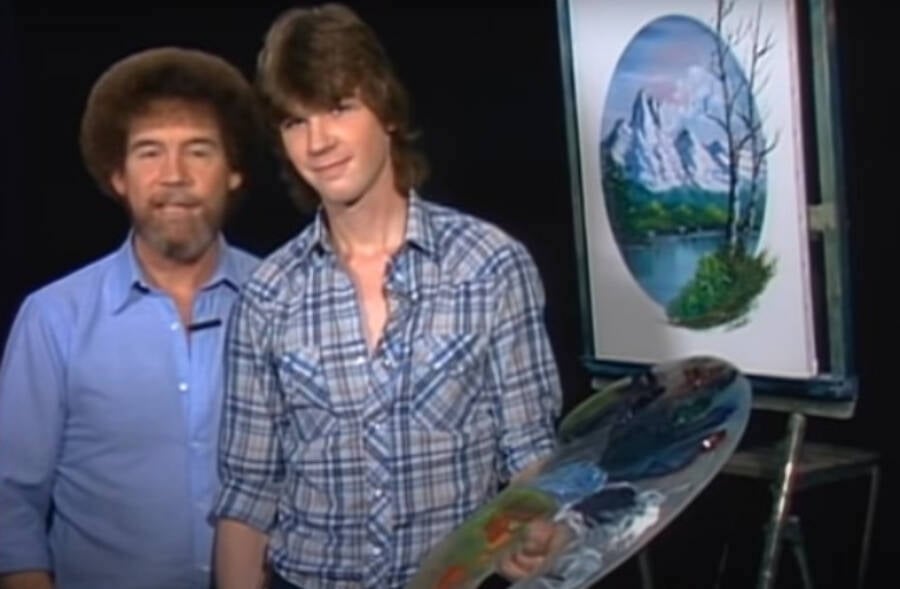 YouTubeBob Ross’ son Steve Ross followed in his father’s footsteps as a young boy and teaches art classes today as an adult.

This, more than the art itself, is what drew people to Ross, and it was perhaps inevitable that they would form what one observer called “a harmless international cult” based on watching Ross paint, sharing his choice quotes, and spreading the gospel that anyone can be an artist.

The Joy of Painting went into international distribution in 1989, and before long, Ross had fans in Canada, Latin America, Europe, and all over the world. By 1994, Ross was a fixture on at least 275 stations and his instructional books were sold in almost every bookstore in America.

But despite his incredible success, Ross seems to have not let his celebrity go to his head. Though he always took an active hand in telling Kowalski how he wanted his business to run, he and his family continued on in their suburban home and lived as privately as they possibly could.

In late spring 1994, Ross was unexpectedly diagnosed with late-stage lymphoma. The demands of his treatment forced him to step away from his show and the last episode aired on May 17. Just over one year later, on July 4, 1995, Bob Ross quietly died from his illness and was buried in New Smyrna Beach, Florida, near where he had lived as a child.

After reading this biography on Bob Ross, take a look at some surreal synesthesia paintings that translate sound to color. Then, learn about Steve Ross, Bob Ross’ beloved son who’s carrying on his father’s legacy.