The Rise And Fall Of The Janissaries, The Ottoman Empire’s Elite Military Force

Beginning in the Late Middle Ages, Ottoman soldiers abducted children from Christian families and forced them into the Janissaries, one of the fiercest armies in history.

During the late Middle Ages, the Janissaries of the Ottoman Empire emerged as one of the most powerful military forces in the world. 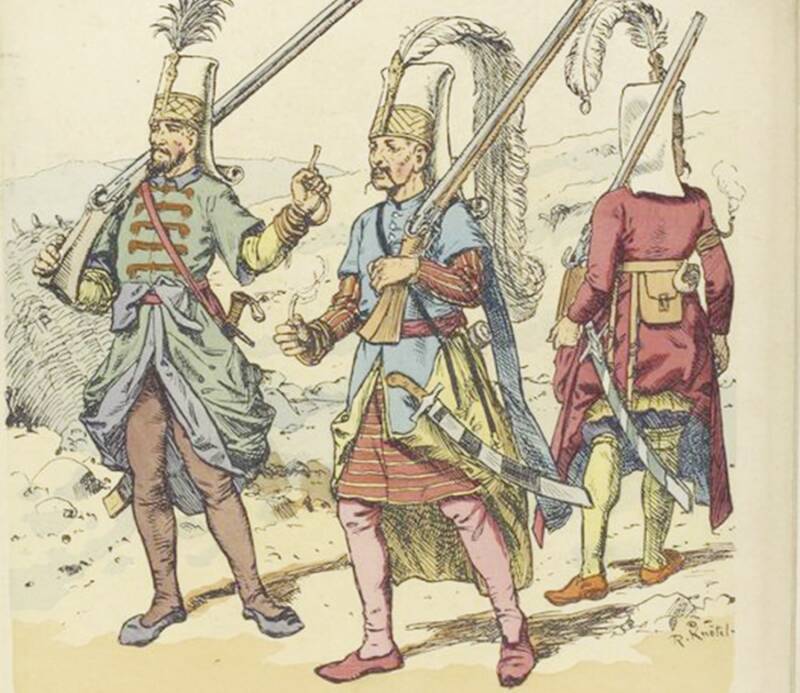 The Janissaries were the most highly-trained fighters that Europe and the Middle East had seen since the days of the Roman Empire. They numbered as many as 200,000 at their height — and every one of them was groomed from an early age to defend the political interests of the growing Ottoman Empire.

Most of the warriors had been seized from Christian households at a young age, converted to Islam, and forced to train for years. Janissaries were loyal only to the sultan, and though they were essentially enslaved, they were well-compensated for their service.

But the Janissaries’ military might also ensured that their political influence would pose a constant threat to the sultan’s own power. This eventually led to the disbandment of the elite force following a mass rebellion in the early 19th century.

The Disturbing Origins Of The Janissaries

The history of the elite Janissaries dates back to the 14th century, when the Ottoman Empire ruled large swaths of the Middle East, North Africa, and parts of Europe.

The Islamic empire itself was founded around 1299 by a Turkish tribal leader from Anatolia — now modern-day Turkey — named Osman I. Under the leadership of his successors, the Ottoman Empire’s territories soon stretched from Asia Minor all the way to North Africa. 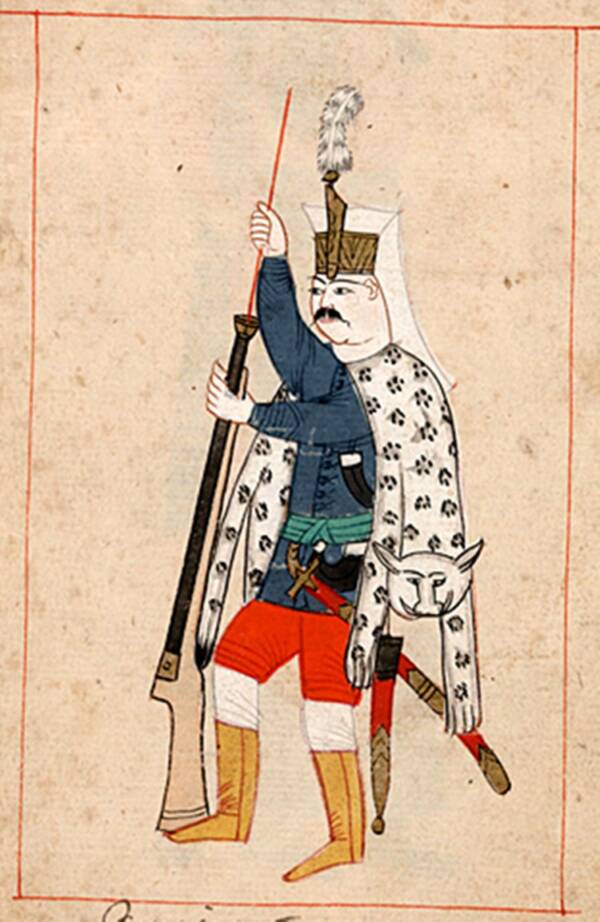 Wikimedia CommonsThe Janissaries were an elite military unit. Their members underwent intense training from an early age and were forced to pledge loyalty to the sultan.

Among Osman’s successors was Sultan Murad I, who ruled over the empire from 1362 until 1389. Under his reign, according to the BBC, a blood tax system known as devşirme, or “gathering,” was levied on the Christian territories conquered by the Ottoman Empire.

The tax involved Ottoman authorities taking Christian boys as young as eight years old from their parents, especially families in the Balkans, to work as slaves.

While many Christian families tried to keep their sons from being taken away by the Ottomans through whatever means possible, some — especially poorer families — wanted to have their children recruited. If their little boys were selected as Janissaries, they would at least have the opportunity to live a life free from poverty and hard labor.

In fact, many Janissaries grew quite wealthy.

The Militant Life Of The Ottoman Janissaries

Not only were the Ottoman Janissaries a special branch of the empire’s military corps, but they also wielded political power. Therefore, members of this corps enjoyed a number of privileges, such as a special status in Ottoman society, paid salaries, gifts from the palace, and even political sway.

Indeed, unlike other classes of slaves gathered through the Ottoman’s devşirme system, the Janissaries enjoyed status as “free” people and were considered “the sons of the sultan.” The best fighters were commonly rewarded with promotions through the military ranks and sometimes secured political positions in the empire. 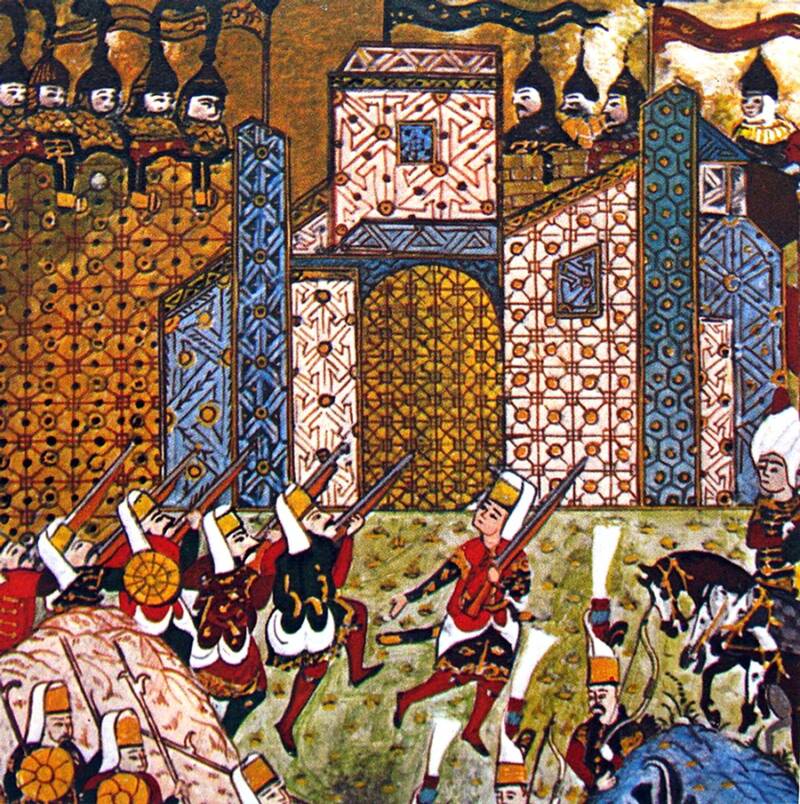 Universal History Archive/Getty ImagesThe 1522 Siege of Rhodes, when the Knights of St. John came under attack by Ottoman Janissaries.

In exchange for these privileges, members of the Ottoman Janissaries were expected to convert to Islam, live a life of celibacy, and commit their full loyalty to the sultan.

The Janissaries were the Ottoman Empire’s crowning glory, defeating the kingdom’s Christian enemies in battle with shocking regularity. When Sultan Mehmed II took Constantinople from the Byzantines in 1453 — a victory that would go down as one of the most historic military achievements of all time — the Janissaries played a significant role in the conquest.

“They were a modern army, long before Europe got its act together,” Virginia H. Aksan, professor emeritus of history at Canada’s McMaster University told Atlas Obscura. “Europe was still riding around with great, big, heavy horses and knights.”

Their distinct war drums on the battleground struck terror into the hearts of the opposition, and the Janissaries remained one of the most feared armed forces in Europe and beyond for centuries. By the early 16th century, Janissary forces had reached about 20,000 soldiers, and that number only continued to grow.

Inside The Rise Of One Of Europe’s Fiercest Armies

Once a child was taken by the Ottoman authorities, circumsized, and converted to Islam, they immediately underwent intense combat training to become part of the Janissaries. The Janissaries were particularly known for their archery skills, but their soldiers were also well-versed in hand-to-hand combat, which served to complement the Ottoman Empire’s advanced artillery.

In addition to their role in the fall of Constantinople, the Janissaries took down many other enemies of the Ottoman Empire. Perhaps the greatest moment in their military history was the Battle of Mohács in 1526, in which they destroyed the entire Hungarian cavalry — and killed Hungary’s King Louis II. 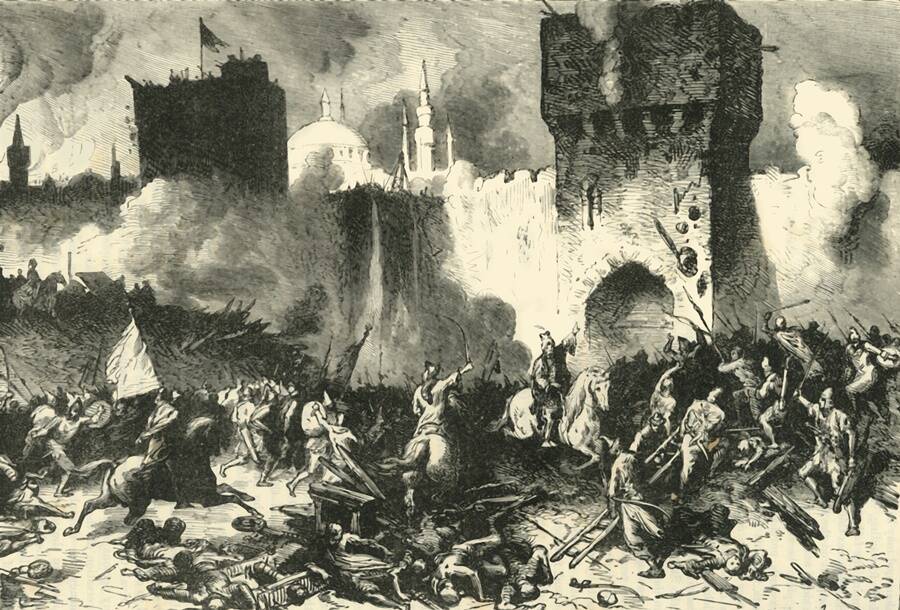 The Print Collector via Getty ImagesThe Fall of Constantinople by the Ottoman army under Sultan Mehmed II.

The head of the entire corps of Janissaries was the yeniçeri agası or the “aga of the Janissaries,” who was considered a high dignitary of the palace. The strongest members often climbed up the ranks and filled higher bureaucratic positions for the sultans, gaining political power and wealth.

When the Ottoman Janissaries weren’t battling enemies at the front lines, they were known to congregate at the city’s coffee shops — the popular gathering place for wealthy merchants, religious clergy, and scholars — or they would gather around their camp’s massive cooking pot known as the kazan.

In fact, the kazan even played a prophetic role in the Janissaries’ history.

Life as a member of the Janissaries didn’t simply involve fighting bloody battles. The Janissaries were ingrained with a strong culture of food for which they would become almost equally famous.

According to Gilles Veinstein’s book Fighting for a Living, the Janissary corps was referred to as the ocak, which meant “hearth,” and the titles within their ranks were derived from cooking terms. For instance, çorbacı or “soup cook” referred to their sergeants — the highest-ranking member of each corps — and aşcis or “cook” referred to the low-ranking officers.

Eating from the kazan was a way to form solidarity among the soldiers. They received an ample supply of food from the sultan’s palace, such as pilaf with meat, soup, and saffron pudding. During the holy month of Ramadan, the troops would form a line to the palace kitchen known as the “Baklava Procession” in which they would receive sweets as gifts from the sultan. 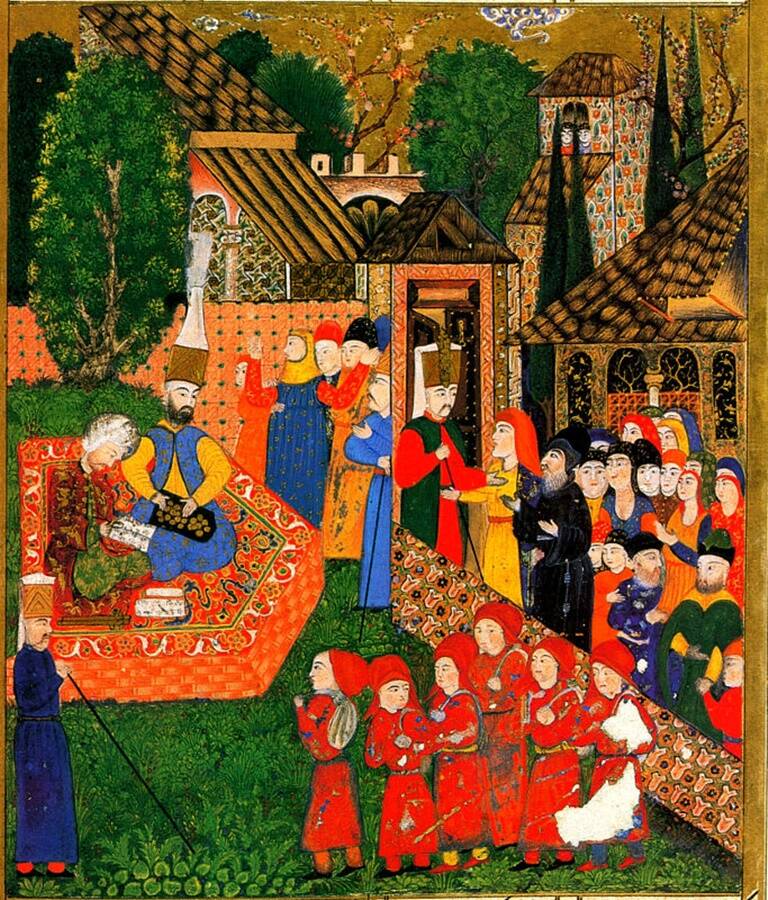 Wikimedia CommonsMembers of the Janissaries were recruited through an archaic blood tax system known as devşirme in which Christian boys between eight and 10 years old were taken away from their families.

Indeed, food was so integral to the Janissaries’ way of life that the sultan’s standing with the troops could be deciphered through food.

“The upsetting of the cauldron was a form of reaction, an opportunity to show power; it was a performance in front of both the authority and the popular classes,” wrote Nihal Bursa, head of the department of industrial design at Turkey’s Beykent University-Istanbul, in “Powerful Corps and Heavy Cauldrons.”

There were several Janissary rebellions throughout the Ottoman Empire’s history. In 1622, Osman II, who planned to dismantle the Janissaries, was killed by the elite soldiers after he banned them from visiting the coffee shops they frequented. And in 1807, Sultan Selim III was dethroned by the Janissaries when he tried to modernize the army.

The Precipitous Decline Of The Janissaries

In a way, the Janissaries were a significant force in protecting the empire’s sovereignty, but they were also a threat to the sultan’s own power. 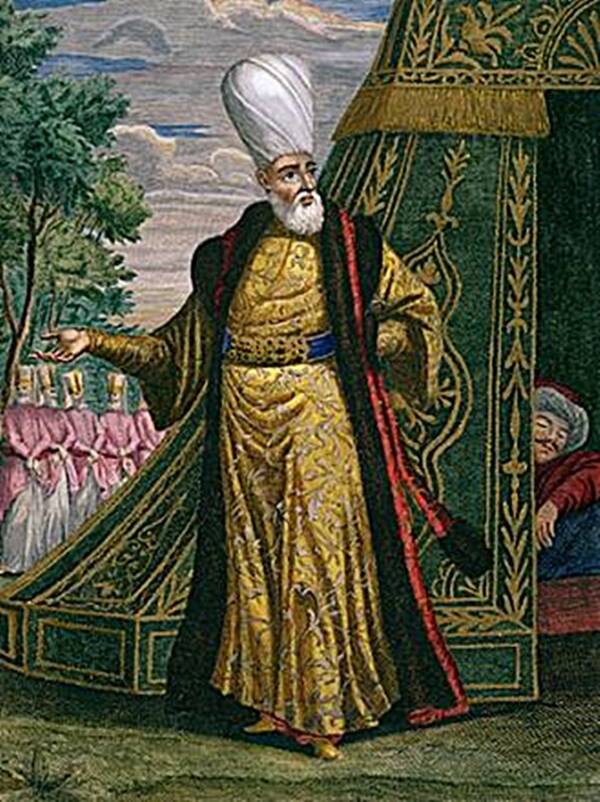 Wikimedia CommonsThe Aga of Janissaries, the leader of the entire elite military corps.

The Janissaries’ political influence began to diminish as the years went on. Devşirme was abolished in 1638, and the membership of the elite force was diversified through reforms that allowed Turkish Muslims to join. Rules that were initially implemented to maintain the soldiers’ discipline — like the celibacy rule — were also relaxed.

Despite their huge growth in numbers over the centuries, the combat prowess of the Janissaries took a big hit due to the relaxing of the group’s recruiting criteria.

The slow decline of the Janissaries came to a head in 1826 under the rule of Sultan Mahmud II. The sultan wanted to implement modernized changes to his military forces which were rejected by the Janissary soldiers. To verbalize their protest, the Janissaries overturned the sultan’s cauldrons on June 15, signaling that a rebellion was brewing. 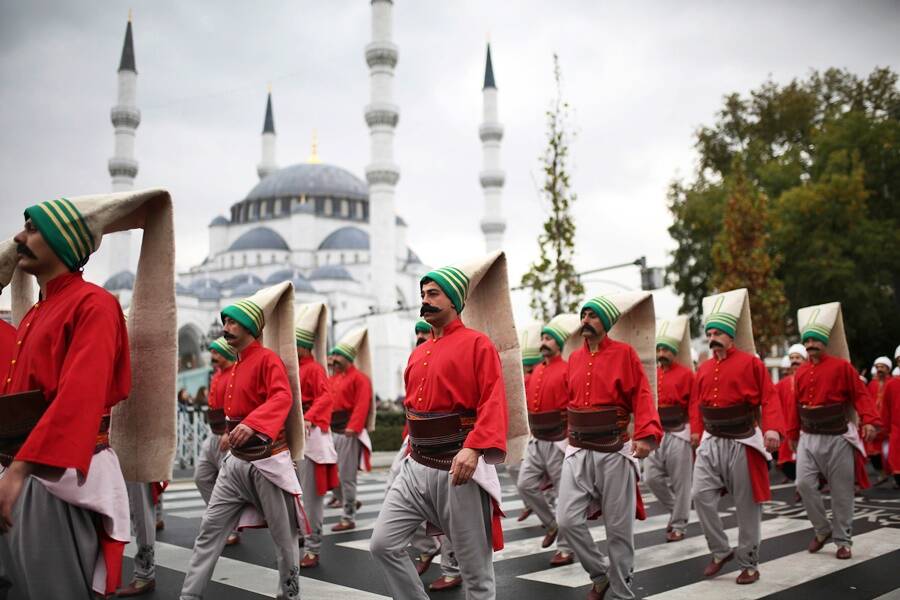 Yet Sultan Mahmud II, anticipating resistance from the Janissaries, was already a step ahead.

He used the Ottoman Empire’s strong artillery to fire against their barracks and had them mowed down in the streets of Istanbul, according to Aksan. Survivors of the massacre were either exiled or executed, marking the end of the formidable Janissaries.

Now that you’ve learned about the history of the Janissaries, the Ottoman Empire’s elite soldiers, read the terrifying true story of one of the empire’s greatest enemies: Vlad the Impaler. Then, meet the Varangian Guard, the Byzantine Empire’s army of Vikings.