Inside The Dancing Plague Of 1518, History’s Strangest Epidemic

In the summer of 1518, the dancing plague in the Holy Roman city of Strasbourg saw some 400 people dance uncontrollably for weeks on end — leaving as many as 100 of them dead.

On July 14, 1518, a woman named Frau Troffea from the city of Strasbourg in modern-day France left her house and began to dance. She kept going and going for hours until she finally collapsed, sweating and twitching on the ground.

As if in a trance, she started dancing again the following day and the next day after that, seemingly unable to stop. Others soon started following suit and she was eventually joined by some 400 other locals who danced uncontrollably alongside her for about two full months. 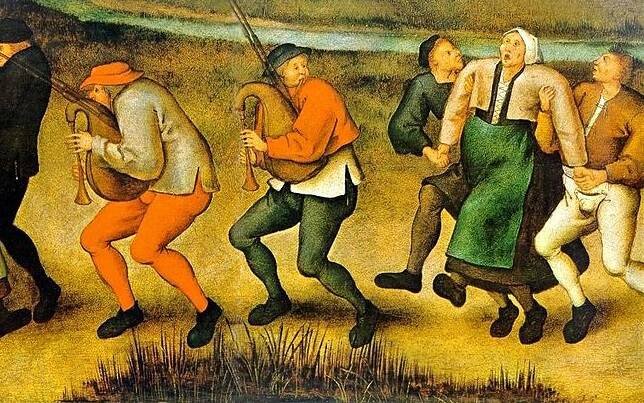 Wikimedia CommonsThe dancing plague of 1518 may have caused the deaths of more than 100 people in modern-day France who simply could not stop moving for days or even weeks on end.

No one knows what caused the townspeople to dance against their will — or why the dancing persisted for so long — but in the end, as many as 100 people died. Historians dubbed this bizarre and deadly event the dancing plague of 1518 and we’re still sorting through its mysteries 500 years later.

Listen above to the History Uncovered podcast, episode 4: Plague & Pestilence – The Dancing Plague Of 1518, also available on iTunes and Spotify.

What Happened During The Dancing Plague Of 1518

Though the historical record of the dancing plague (also known as “dancing mania”) is often spotty, surviving reports give us a window into this unusual epidemic.

After the dancing plague commenced with Frau Troffea’s fervent-yet-joyless marathon of movement, her body eventually succumbed to severe exhaustion that left her in a deep sleep. But this cycle, much to the bewilderment of her husband and onlookers, repeated every day no matter how bloody and bruised her feet became.

Unable to summon any rational explanation, the crowds of people who witnessed Troffea’s dancing suspected it was the handiwork of the devil. She had sinned, they said, and was therefore unable to resist the powers of the devil who had gained control over her body.

But as quickly as some had condemned her, many townspeople began to believe that Troffea’s uncontrollable movements were divine intervention. Locals in the area believed in the lore of St. Vitus, a Sicilian saint martyred in 303 A.D. who was said to curse sinners with uncontrollable dancing mania if angered. 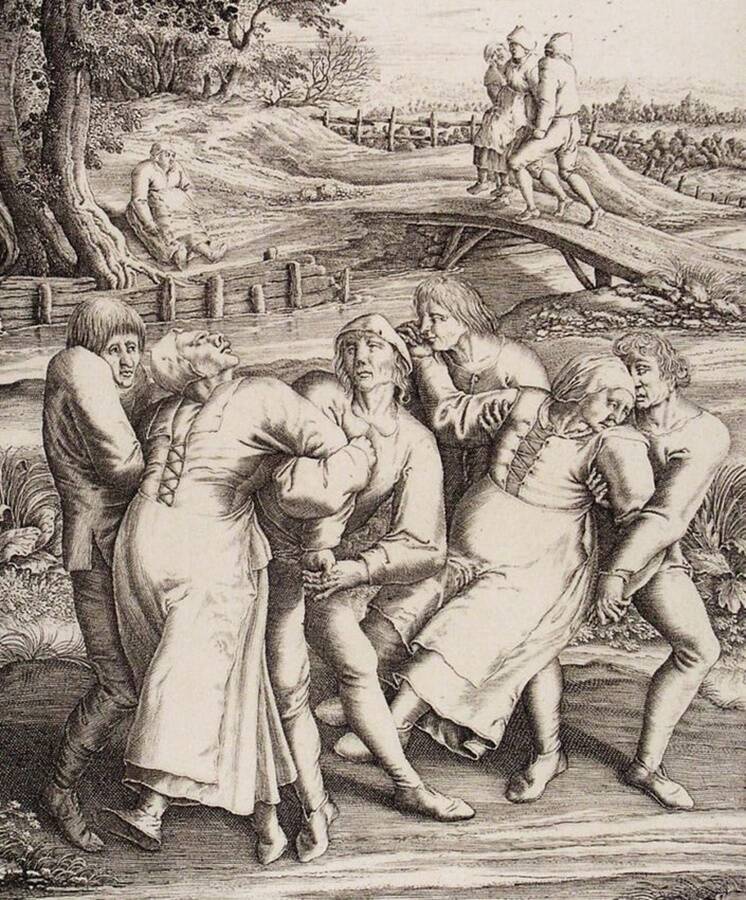 Wikimedia CommonsDetails of a 1642 engraving by Hendrik Hondius, based on Peter Breughel’s 1564 drawing depicting sufferers of a dancing plague in Molenbeek.

After suffering several days of non-stop dancing and with no explanation for her uncontrollable urge, Troffea was brought to a shrine high up in the Vosges Mountains, possibly as an act of atonement for her purported sins.

But it didn’t put a stop to the mania. The dancing plague swiftly took over the city. It was said that about 30 people quickly took her place and began dancing with “mindless intensity” in both public halls and private homes, unable to stop themselves just like Troffea.

Eventually, reports say that as many as 400 people began dancing in the streets at the dancing plague’s peak. The chaos continued for some two months, causing people to keel over and sometimes even perish from heart attacks, strokes, and exhaustion.

One account claims that there were upwards of 15 deaths every day when the dancing plague reached its height. In the end, about 100 people may have died thanks to this bizarre epidemic.

However, skeptics of this outrageous tale have understandably questioned how exactly people could dance almost continuously for weeks on end. 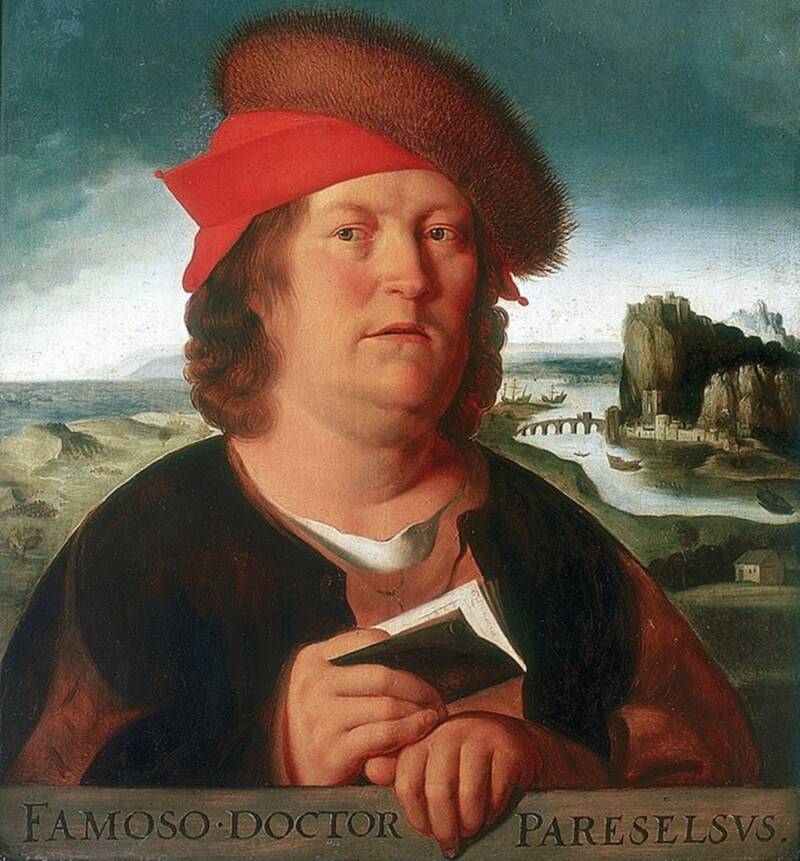 Wikimedia CommonsMedieval physician Paracelsus was among those who chronicled the dancing plague of 1518.

Modern historians say there is enough literature surrounding the phenomenon to corroborate that it did actually happen. Experts first uncovered the dancing plague thanks to contemporaneous local records. Among them is an account written by the medieval physician Paracelsus, who visited Strasbourg eight years after the plague struck and chronicled it in his Opus Paramirum.

What’s more, copious records of the plague appear in the city’s archives. One section of these records describes the scene:

“There’s been a strange epidemic lately
Going amongst the folk,
So that many in their madness
Began dancing.
Which they kept up day and night,
Without interruption,
Until they fell unconscious.
Many have died of it.”

A chronicle composed by the architect Daniel Specklin that’s still kept in the city archives described the course of events, noting that the city council came to the conclusion that the bizarre urge to dance was the result of “overheated blood” in the brain.

“In their madness people kept up their dancing until they fell unconscious and many died.”

In a misguided attempt to cure the townspeople of the plague, the council imposed a counterintuitive solution: They encouraged victims to continue their dancing, perhaps in the hopes that people would inevitably tire out safely. 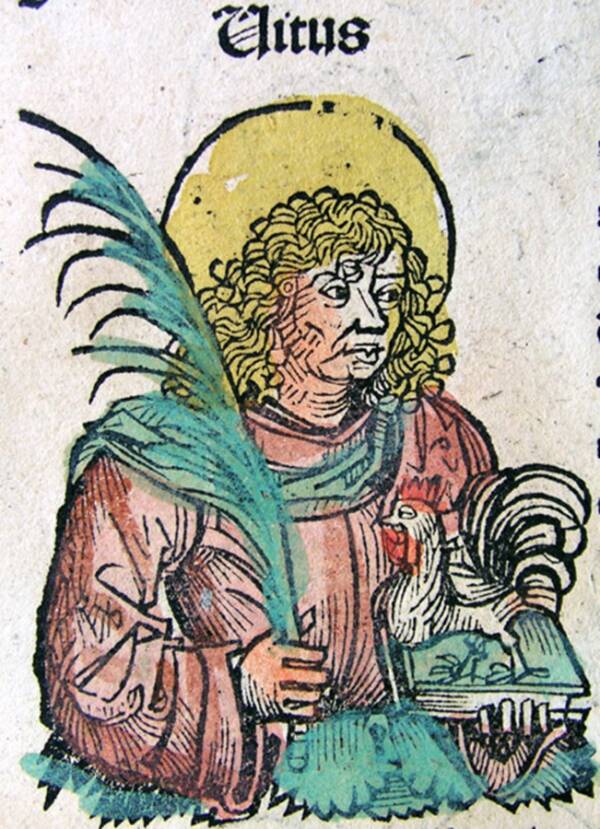 Wikimedia CommonsResidents in the area believed that the painful dancing spell was caused by the wrath of St. Vitus.

The council provided guildhalls for the people to dance in, enlisted musicians to provide accompaniment and, according to some sources, paid “strong men” to keep the dancers upright for as long as possible by lifting their exhausted bodies as they whirled around.

After it became clear that the dancing plague wouldn’t end anytime soon, the council employed the extreme opposite of their initial approach. They decided that infected people had been consumed by holy wrath and so penance was enforced on the town along with the banning of music and dancing in public.

According to city documents, the delirious dancers were eventually taken to a shrine dedicated to St. Vitus located in a grotto on the hills in the nearby town of Saverne. There, the dancers’ bloodied feet were placed into red shoes before they were led around with a wooden figurine of the saint.

Miraculously, the dancing finally came to an end after several weeks. But whether any of these measures helped — and what caused the plague in the first place — remained mysterious.

Why Did The Dancing Plague Happen? 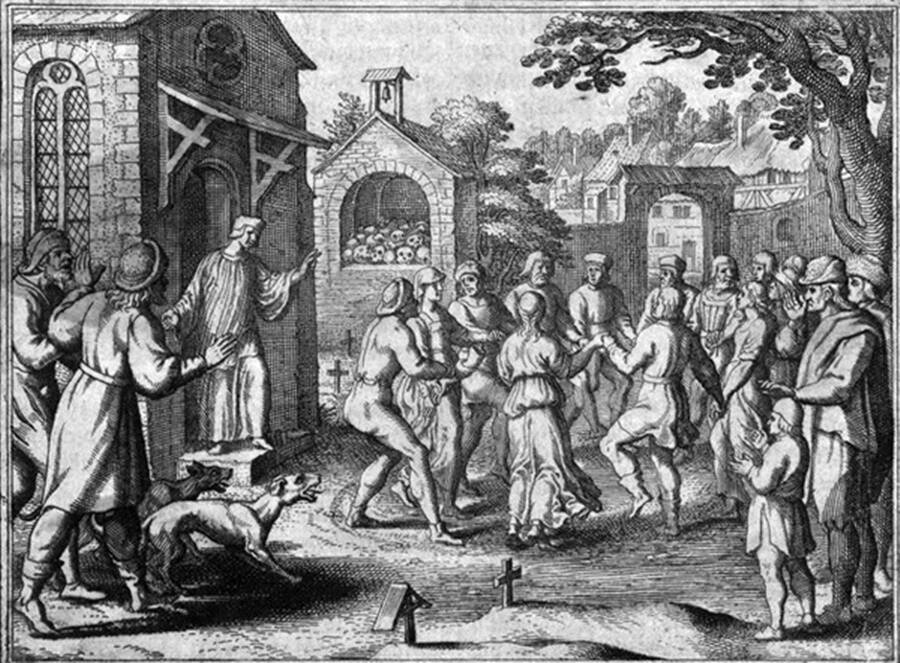 Wikimedia CommonsTheories about what caused the dancing plague of 1518 elicit as many questions as the strange epidemic itself.

Five centuries later, historians are still unsure about what caused the dancing plague of 1518. Modern explanations vary, though one claims that the dancers suffered effects of a psychotropic mold known as ergot which grows on damp stalks of rye and can produce a chemical similar to LSD.

But even though ergotism (which some say caused the Salem witch trials) can bring on delusions and spasms, other symptoms of the condition include an extreme decrease in blood supply which would have made it challenging for people to dance as hard as they did.

Offering another theory, historian John Waller posited that the dancing plague was simply a symptom of medieval mass hysteria. Waller, author of A Time to Dance, A Time to Die: The Extraordinary Story of the Dancing Plague of 1518 and the foremost expert on the subject, believes mass hysteria brought on by horrific conditions in Strasbourg at the time — extreme poverty, disease, and starvation — caused the townspeople to dance from stress-induced psychosis.

He argued that this collective psychosis was possibly exacerbated by the supernatural beliefs common in the region, namely the lore surrounding St. Vitus and his dance-inducing powers. There had previously been at least 10 other outbreaks of inexplicable dancing mania centuries before the events at Strasbourg took place.

According to sociologist Robert Bartholomew, these plagues and could see dancers parading around naked, making obscene gestures, and even fornicating in public or acting like barnyard animals. Dancers could also become violent towards observers if they did not join in.

All of these examples of dancing mania took root in towns near the River Rhine where the legend of St. Vitus was strongest. Waller cited the theory of “environment of belief” proposed by U.S. anthropologist Erika Bourguignon which argues that supposed “spirit possessions” occur primarily where supernatural ideas are taken seriously.

This, in turn, encourages believers to enter a dissociative mental state in which their normal consciousness is disabled, causing them to carry out irrational physical acts. The cultural norm of believing in a higher power, Waller continued, made people susceptible to adopt extreme behaviors spurred by the dissociative state of others. 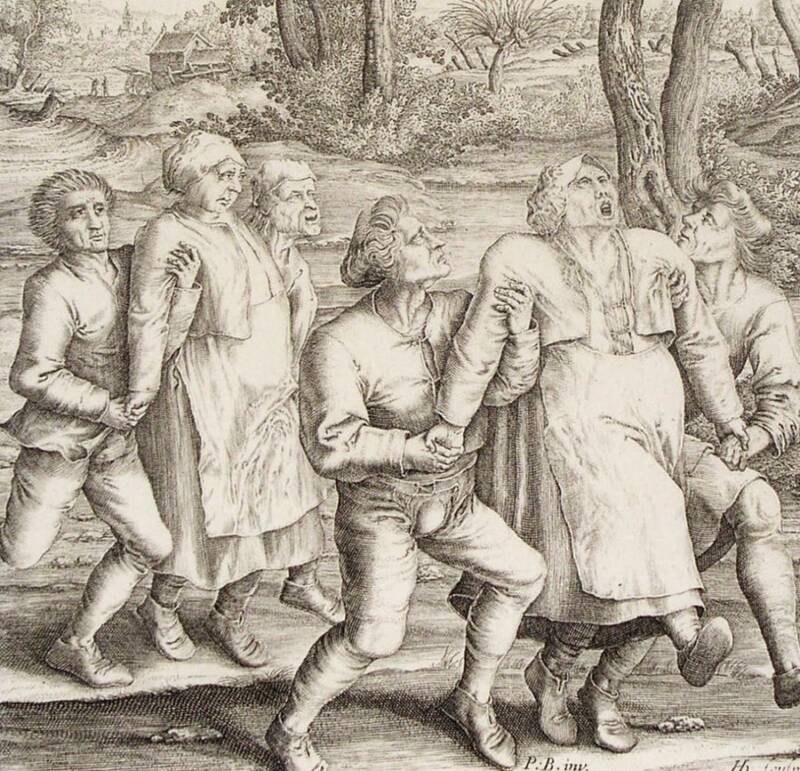 “If the dancing mania really was a case of mass psychogenic illness, we can also see why it engulfed so many people: few acts could have been more conducive to triggering an all-out psychic epidemic than the councilor’s decision to corral the dancers into the most public parts of the city,” Waller wrote in the Guardian. “Their visibility ensured that other city folk were rendered susceptible as their minds dwelt on their own sins and the possibility that they might be next.”

If Waller’s theory of a mass psychological illness does indeed explain the dancing plague, it’s a prime and terrifying example of how the human mind and body can work together to create chaos.

After this look at the dancing mania of 1518, read about how the Black Death started and learn the secrets of medieval plague doctors.