Considered the deadliest natural disaster in American history, the Galveston Hurricane of 1900 left one in four city residents homeless and killed up to 12,000 people.

On September 8, 1900, the coastal city of Galveston, Texas, was hit by a hurricane like none that the United States had ever experienced before.

Winds of 120 miles per hour slammed the city with flying debris that cut through homes like shrapnel. Waves crashed onto the streets, leaving the city 15 feet underwater at one point. And, worst of all, virtually nobody had the foresight to evacuate.

Galvestonians had experienced ocean floodwaters from storms before, but they hadn’t ever done much more than board up windows and build beach houses up off the ground as prevention. This lack of preparation would cost them dearly. 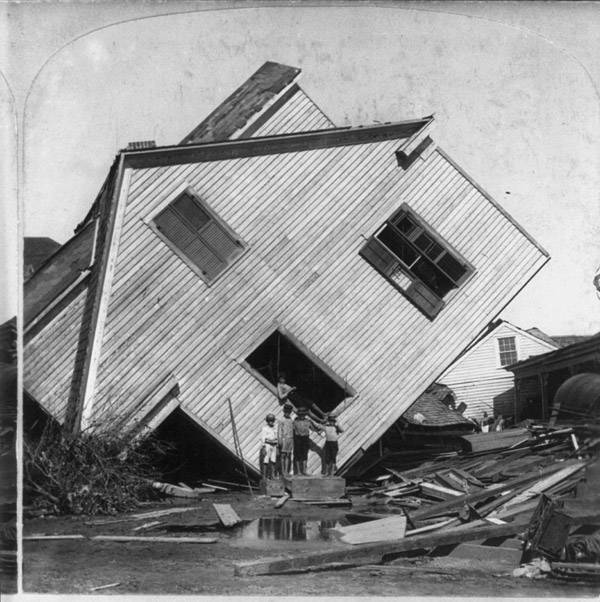 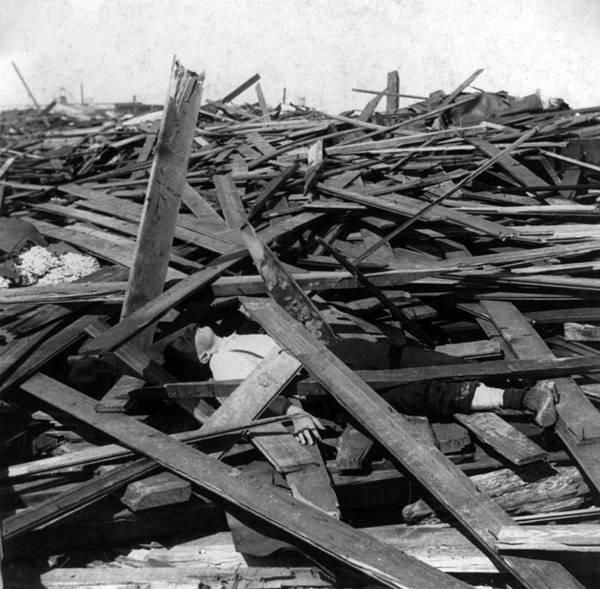 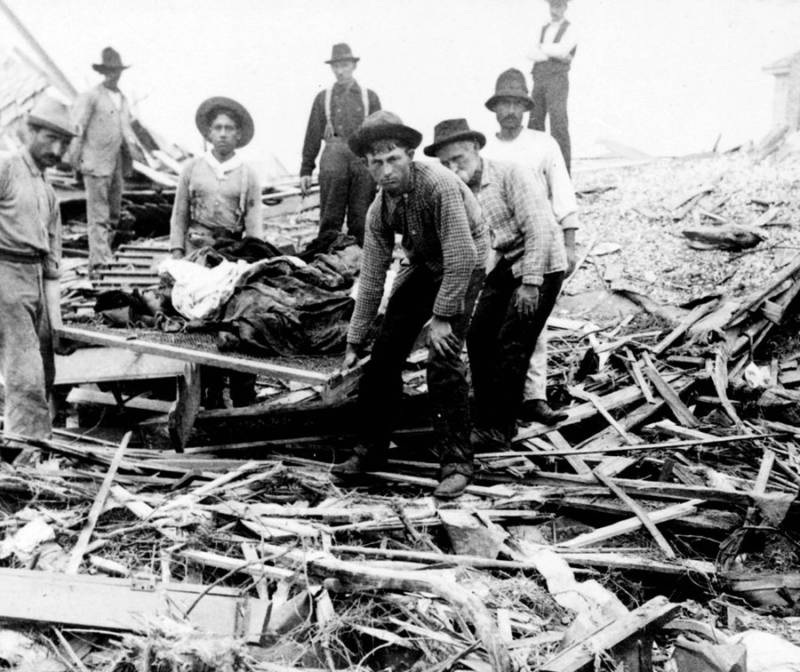 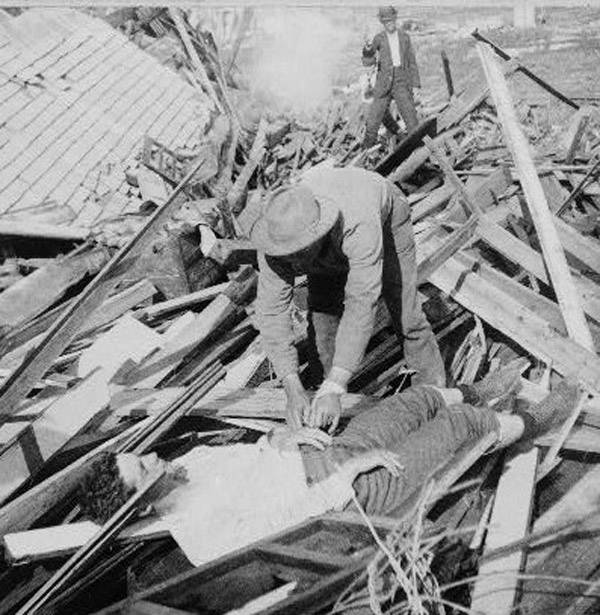 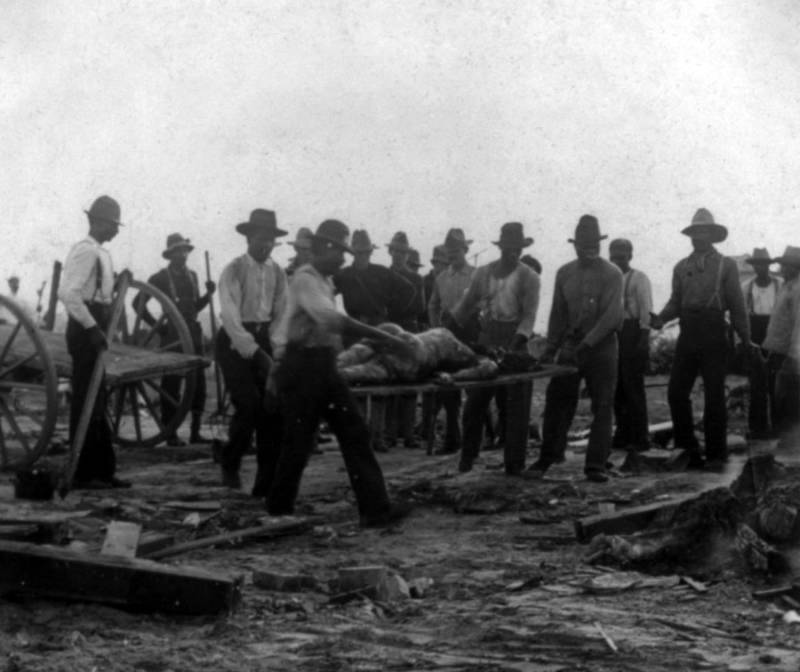 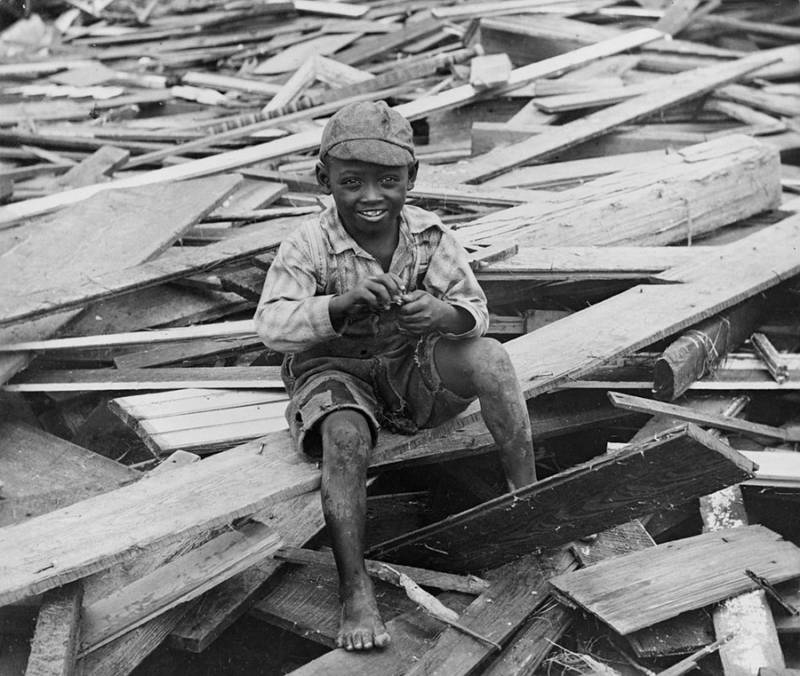 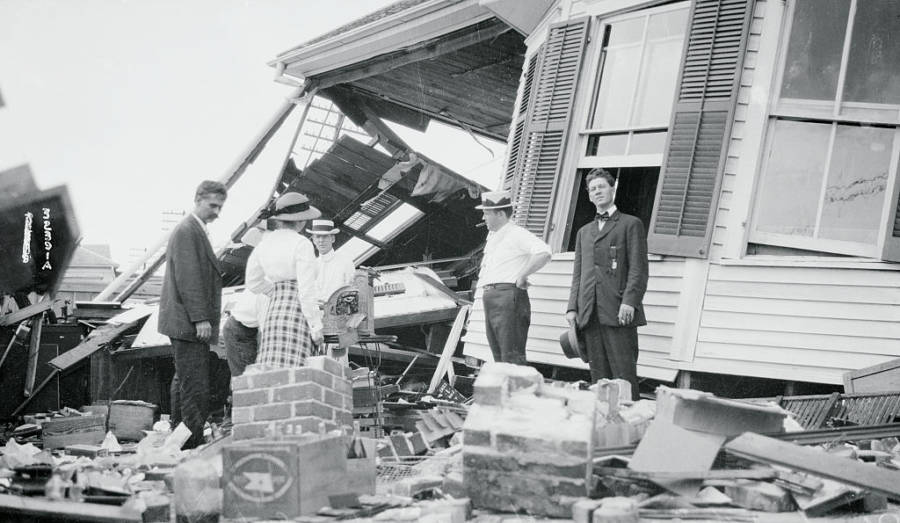 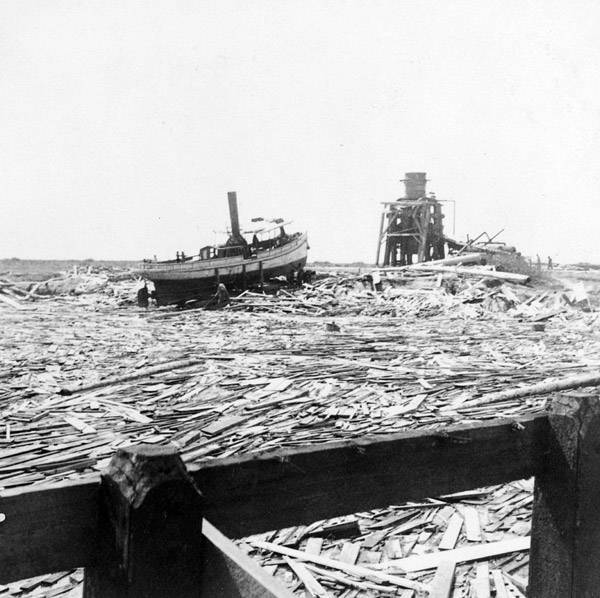 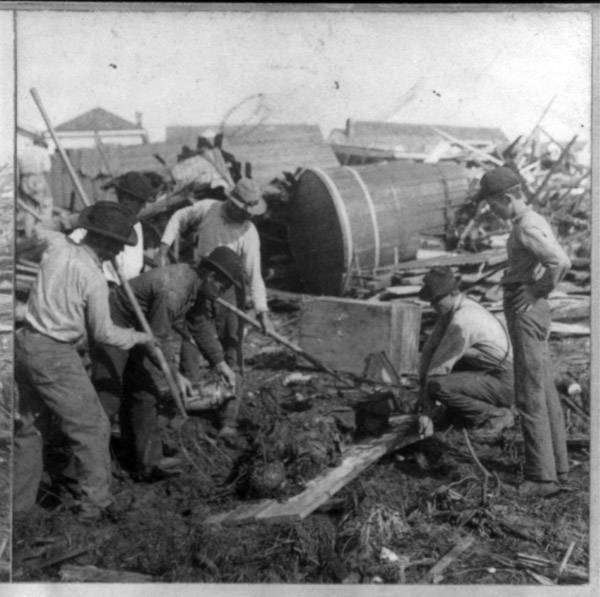 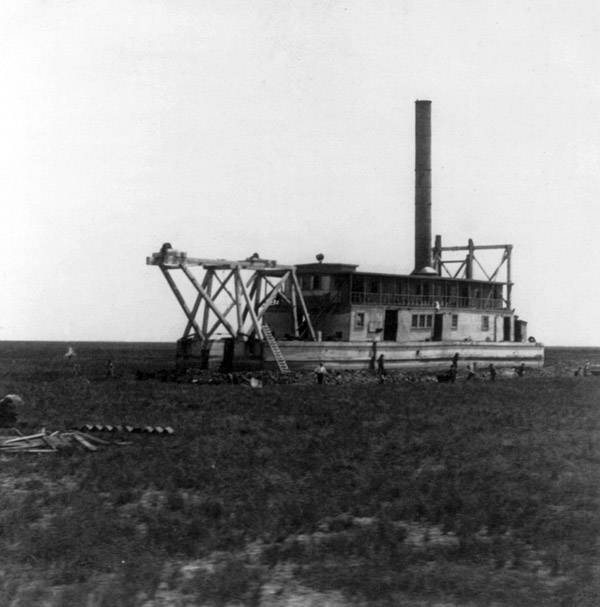 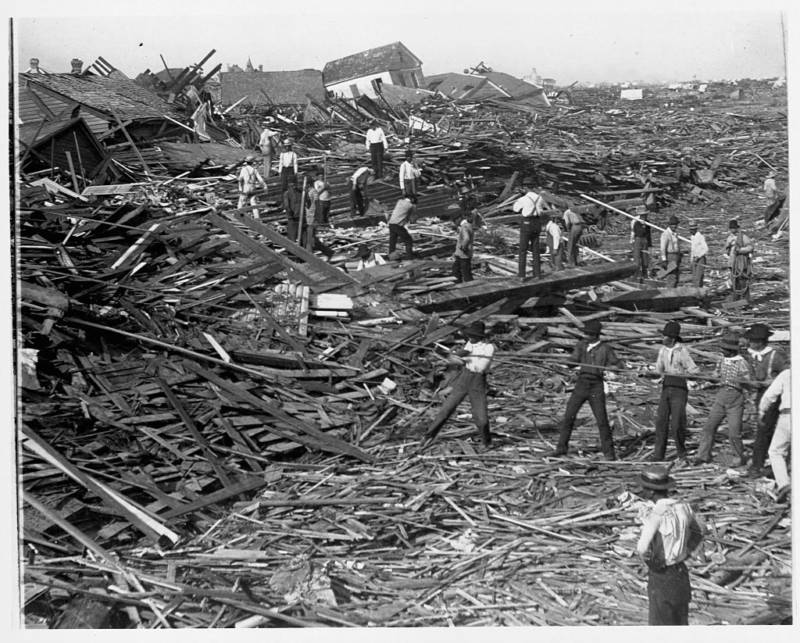 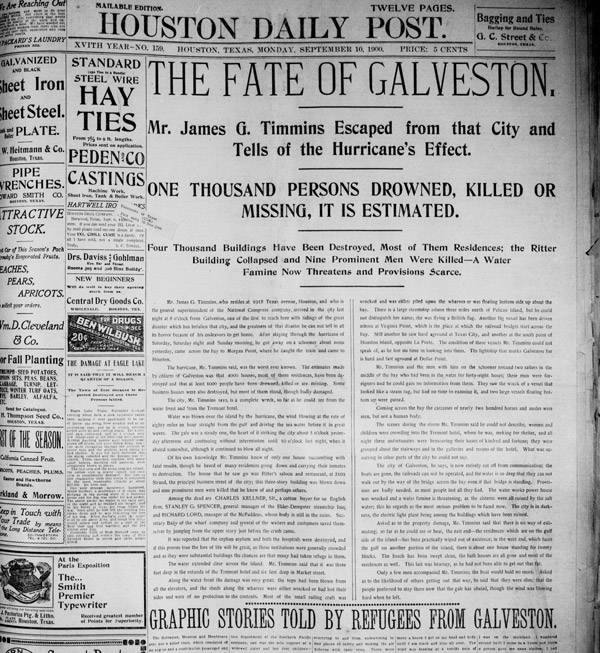 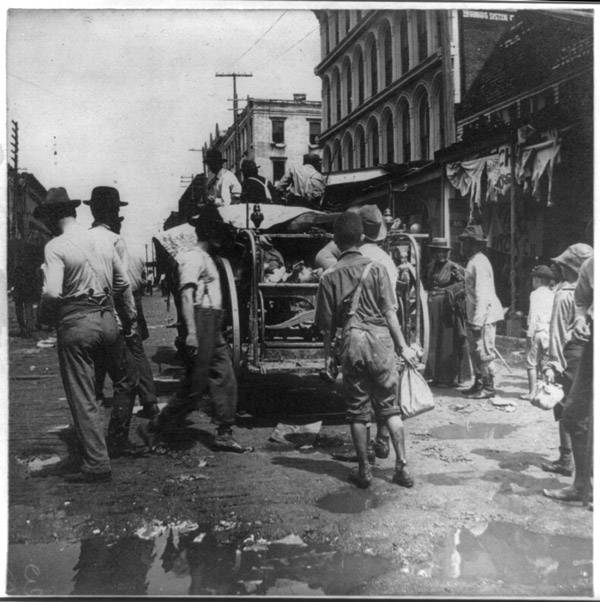 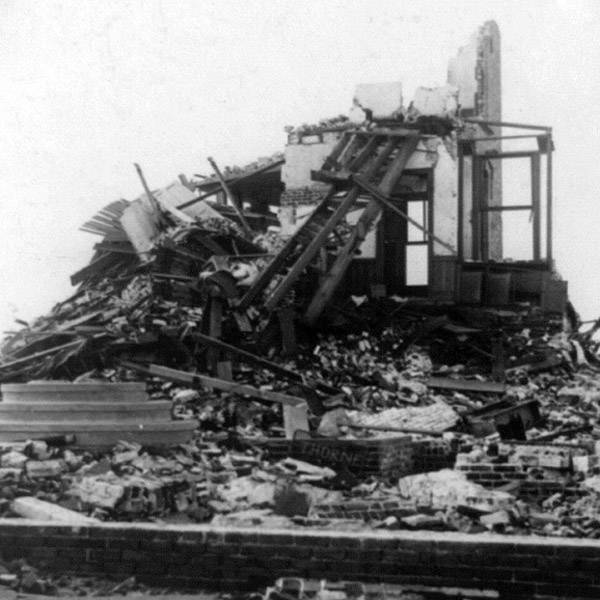 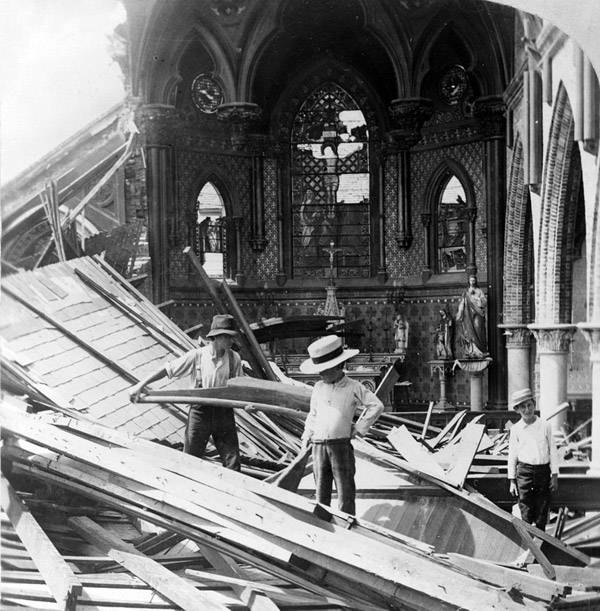 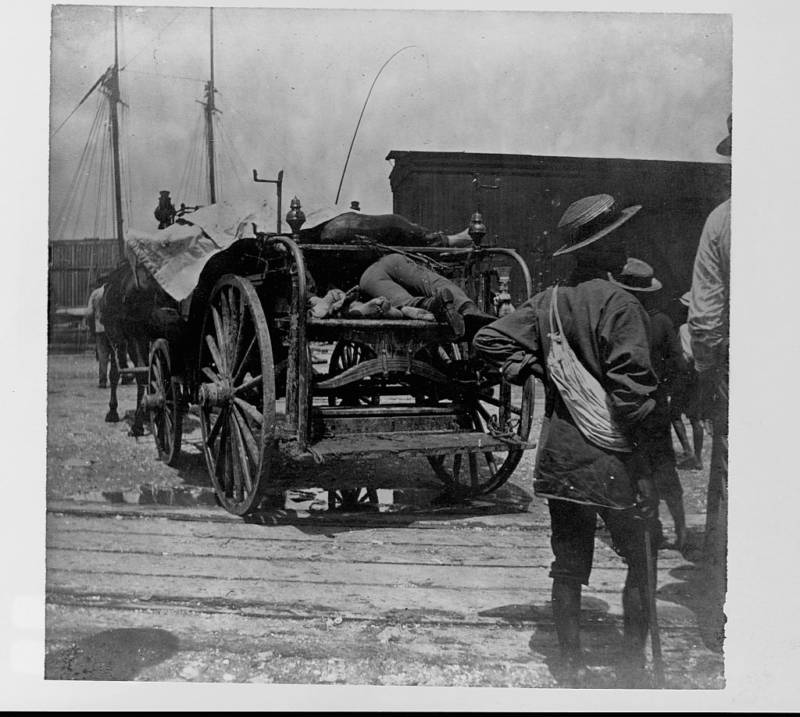 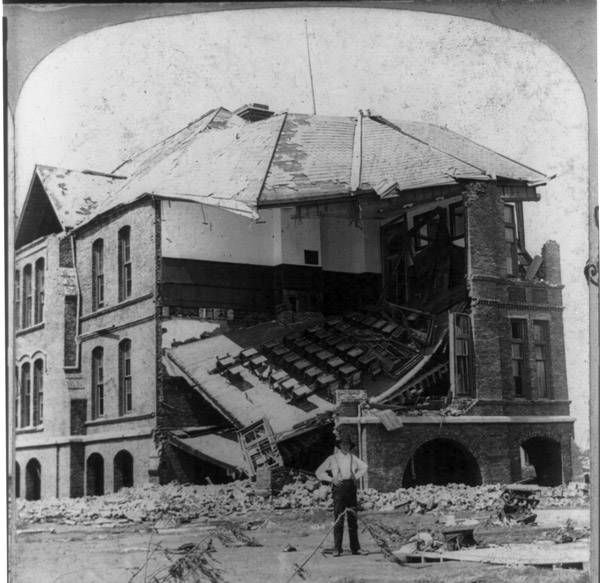 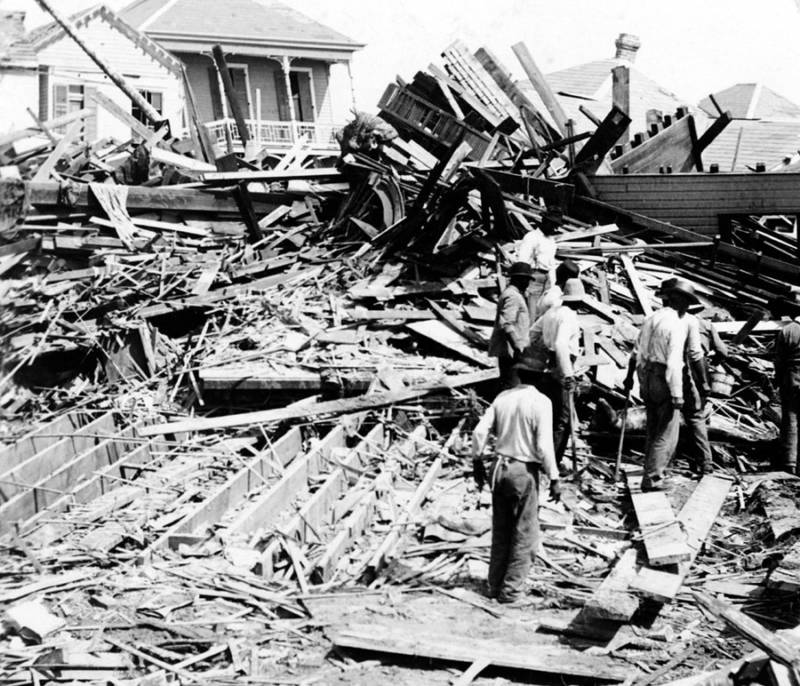 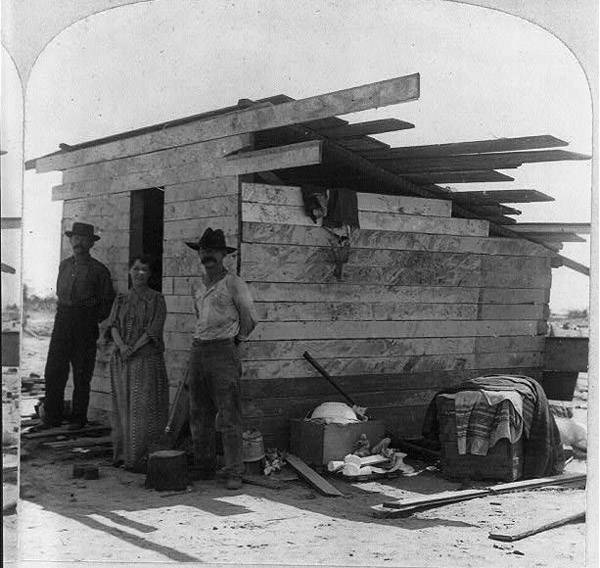 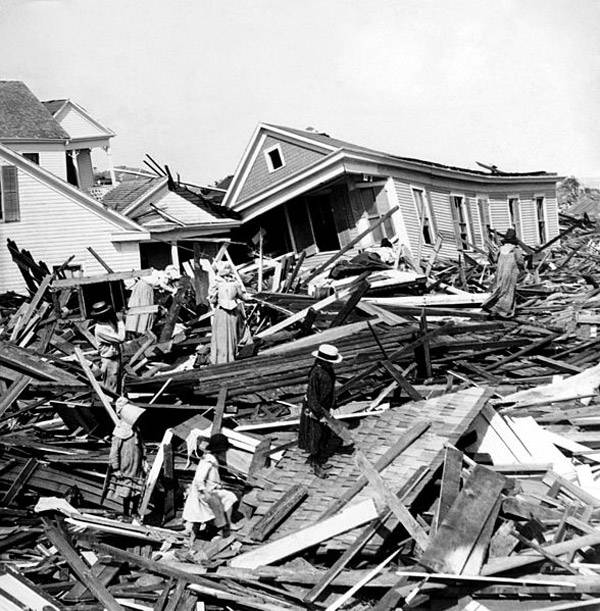 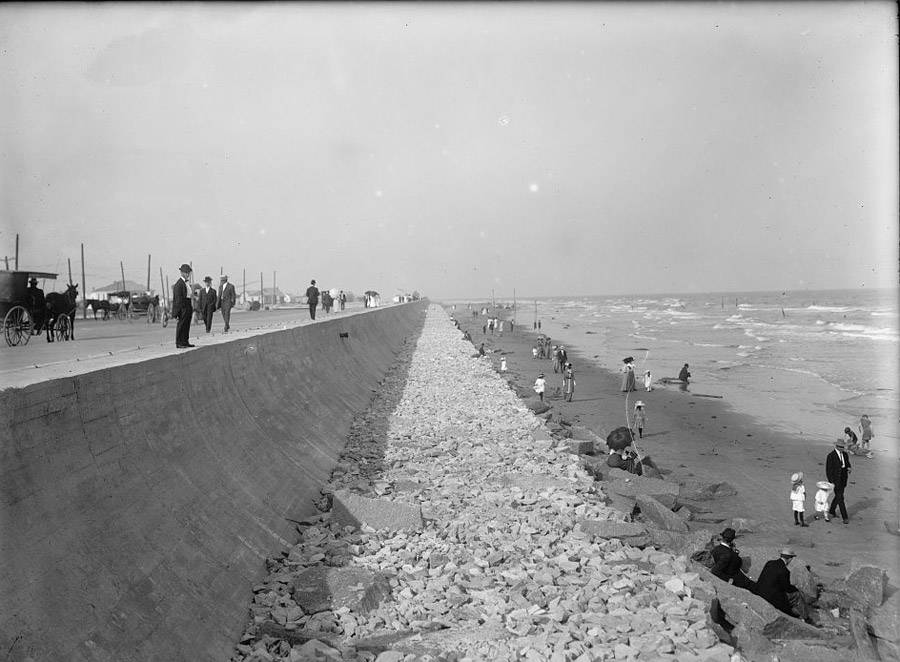 The Galveston Hurricane of 1900 remains the deadliest natural disaster in modern American history, leaving behind an estimated death toll of 6 to 12 thousand people and creating half a billion dollars in damages.

Warnings Ignored, Telegraph Lines Destroyed, And Calamity In The Making

The first sign that trouble was coming occurred on August 27, when a ship traveling 1,000 miles off the coast of the West Indies reported "unsettled" weather — but nothing to cause alarm.

Antigua saw thunder, and Cuba got quite a lot of rain in the following days, but the tropical storm that hit the Florida Straights was only a shadow of what it would grow to be.

The problem was the Gulf of Mexico: its waters were warm that summer, and conditions were perfect to turn a tropical squall into a monster hurricane. But U.S. meteorologists ignored warnings from Cuba, not because they were unaware of the danger posed by the Gulf waters, but because they didn't think the storm was headed that way.

They were convinced the storm was heading northeast, up the East Coast and into cooler Atlantic waters, and nothing Cuban meteorologists told them could convince them otherwise (tensions were running high in the aftermath of the Spanish-American War, and the American Weather Bureau director Willis Moore was resentful).

It came as a surprise, then, when on September 6, Captain Halsey of The Louisiana reported that he and his crew had encountered a hurricane shortly after they set sail from New Orleans — in Gulf Coast waters.

The news was especially startling because few other sources reported it. With telegraph lines knocked down and destroyed, word that the Louisiana and Mississippi coasts had suffered heavy damage was slow to spread.

Which is perhaps why Galveston residents didn't evacuate: they had no idea they should.

The 1900 Galveston Hurricane: The Storm To End All Storms

On Friday, September 7, Galveston was issued a storm warning by the central office of the Weather Bureau (now the National Weather Service). As the sun set that evening, large swells were rising in the Gulf, and clouds began to roll in from the north.

The following morning, a single-paragraph story with a headline that read "Storm in the Gulf" appeared in the newspaper, but it did little to cause the citizens much concern. Residents were similarly complacent when Galveston's Weather Bureau raised its hurricane flags. After all, people said, Galveston had survived storms before — it would survive them again.

Nothing in the reporting indicated to them that the Galveston Hurricane would be a different kind of storm — one unlike anything the Gulf Coast had seen before.

Isaac M. Cline, a Weather Bureau official, would later say that he drove his horse-drawn buggy through Galveston's neighborhoods, urging people to seek shelter. Even Cline didn't believe there was cause for serious concern, though, writing in 1891 that "it would be impossible for any cyclone to create a storm wave which could materially injure the city."

He hadn't even supported the failed movement to build a sea wall to protect Galveston from ocean-born storms years earlier. (It should be noted that Cline survived the storm, but his words would haunt him.)

"There Were Dead Bodies For Miles"

Wikimedia CommonsA family combs through the wreckage, looking for any valuables that might have survived the storm.

On September 9, a Category 4 hurricane made landfall in Galveston, bringing with it a massive wave. The highest point in the low, flat city was less than nine feet above sea level; the storm surge topped 15 feet, leaving Galveston entirely submerged.

The weather building's measurement device was blown off the building, leaving the job of estimating wind speeds to modern scientists, who believe the storm may have reached maximum sustained winds of 145 miles per hour.

When it was all over, not a single house in the city was undamaged. Eighty percent of the population of Galveston was suddenly homeless and as many as one in five were dead. Clean-up crews would later say that the stench of the bodies spread for miles.

The wrath of the Galveston Hurricane changed the city's stance on hurricane preparation, causing officials to build a 17-foot sea wall two years later in order to break storm swells.

The Gulf Coast of Texas would be reminded of the power of a hurricane again, 105 years later, when Hurricane Rita — the fourth-most intense Atlantic hurricane on record — would lead to Galveston's largest evacuation. Only this time, they would be ready for it.

After this look at the devestating Galveston Hurricane of 1900, discover the the weirdest disasters in human history. Then, read these facts about American history you probably never knew.