Whaling has been a Japanese tradition for centuries and was particularly important post-World War II to feed the country's poor. Now, the government wants to revive the whaling industry despite growing disinterest in whale meat among Japanese. 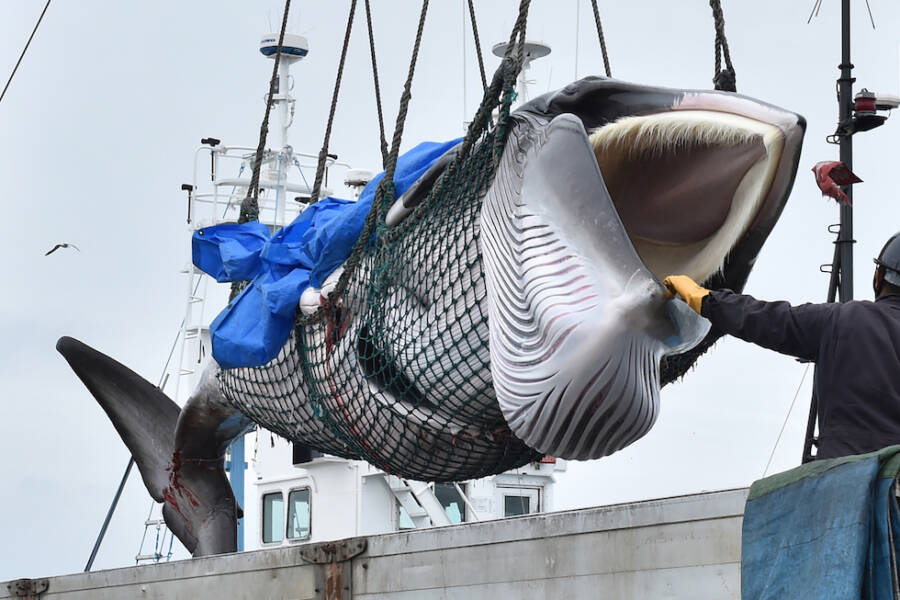 Kazuhiro Nogi/AFP/Getty ImagesJapanese whalers brought ashore their first catches on July 1 after a long hiatus from the practice.

After three decades of pulling back from its age-old tradition of whale hunting, the Japanese government has decided to return it. The ban lift comes in effect on July 1 following the country’s official withdrawal from the International Whaling Commission (IWC) in December.

Japan joined the IWC in 1986 in order to allow whale populations to bounce back for a time, believing that the pact was temporary. But after decades under the ban, Japan has grown impatient with this policy. After a “sustainable whaling” proposal was rejected yet again, the country decided in December to leave the Commission altogether to reinstate their whaling practices and has consequently outraged international conservationists.

As Japan Today reports, Humane Society International President Kitty Block stated that Tokyo is “undermining its reputation for an industry whose days are so clearly numbered, to produce a product for which demand has plummeted.”

Despite the international criticism, the repeal of the whaling ban was celebrated by industry actors who have long-awaited for the country to return to the tradition.

“Today is the best day,” Yoshifumi Kai, head of the Japan Small-Type Whaling Association, said. “It was worth waiting for 31 years.”

And whalers left no time to waste. According to The Guardian, five vessels equipped with harpoons left the town of Kushiro in northern Japan while another three boats left Shimonoseki in south-western Japan right on the morning that the ban lift took effect. The ships have a permit to catch 227 minkes, Bryde’s and sei whales this year in domestic waters. 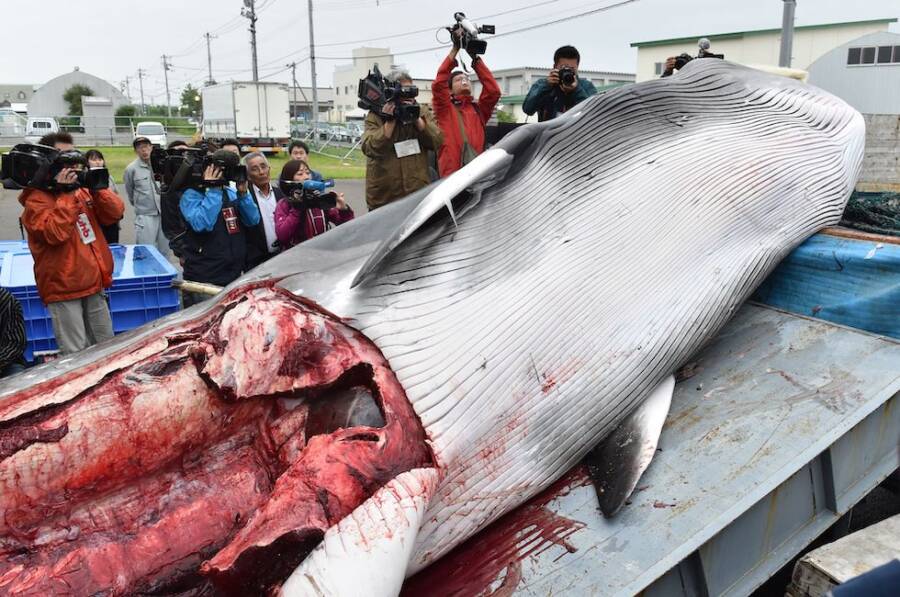 Kazuhiro Nogi/AFP/Getty ImagesJapan’s return to commercial whaling has sparked international criticism from environmentalists who say it is a wasted effort for a dying industry.

The vessels returned hours later with two grey minke whales, one of which spanned more than 26 feet. The whales were later brought back to a warehouse where workers poured ceremonial cups of celebratory sake over their bodies which is a common ritual intended to purify the catch.

Before the whaling ban first took effect 31 years ago, whaling was a common and centuries-old practice in Japan. It took on a special significance in the post-war years following the country’s defeat in World War II, as whale meat served as the main source of protein for a destitute and struggling population.

“This is a small industry, but I am proud of hunting whales. People have hunted whales for more than 400 years in my home town,” Kai added.

It’s also worth noting that despite the supposed ban in recent decades, the country still managed to continue their practice. Indeed, many suspected that Japan had been using a loophole in the IWC agreement that allowed whaling for research purposes as a cover for commercial whaling. Japanese whalers killed 333 minke whales during a supposed research expedition to Antarctica whereafter they allegedly sold the meat on the open market.

Japan is estimated to have killed almost 1,000 whales yearly even during the whaling ban. They consequently were met with clashes against marine conservation groups. Most notable of these clashes included the infamous Sea Shepherd, which pro-whalers have deemed an “eco-terrorist” organization.

Following Japan’s withdrawal from the IWC, domestic whalers will be allowed to resume commercial whaling limited to the country’s own exclusive economic zone. The Antarctic expedition that Japan had previously launched was ended in March. 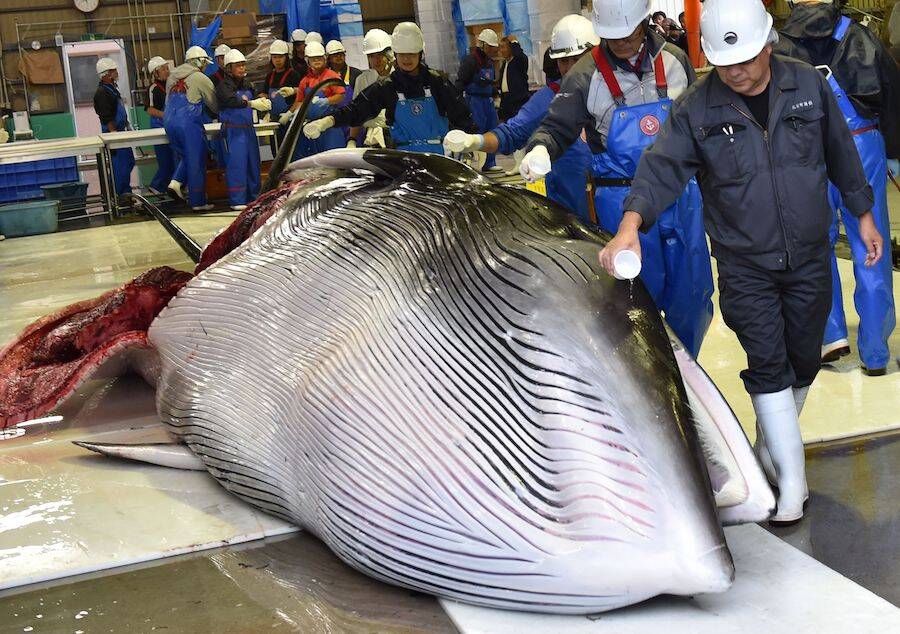 Kazuhiro Nogi/AFP/Getty ImagesWorkers pour sake on a captured Minke whale after it was unloaded in a celebratory ceremony mean to purify the catch.

While whaling was a primary resource for the population’s livelihood during post-war times, the consumption of whale meat has plummeted drastically among the Japanese which has further fueled arguments from advocates to put an end to its whaling practices.

“The palates of the Japanese people have moved on,” Patrick Ramage, the director of marine conservation at the International Fund for Animal Welfare, said. “They have lost their yen for whale meat, even as their government has spent billions in taxpayer yen trying to prop up this economic loser. What we are seeing is the beginning of the end of Japanese whaling.”

In the face of heavy opposition, the Japanese government maintains that because whaling holds such a significant role in their cultural practice, it should, therefore, be exempt from outside criticism. For fishermen like 23-year-old Hideki Abe from Ishinomaki, it is a chance to revive a fading tradition.

“I’m a bit nervous but happy that we can start whaling,” Abe told Agence France-Presse just before the first fleets departed. “I don’t think young people know how to cook and eat whale meat anymore. I want more people to try to taste it at least once.”

Next, read about how researchers successfully reconstructed the face of an ancient Japanese woman using only her molar. And then, discover these seven bizarre cultural practices worldwide still carried out today.