In 1949, the military told 500 families that the bodies of their loved ones were still on the island of Betio in the Tarawa atoll, and couldn't be recovered. That never sat well with History Flight president Mark Noah. 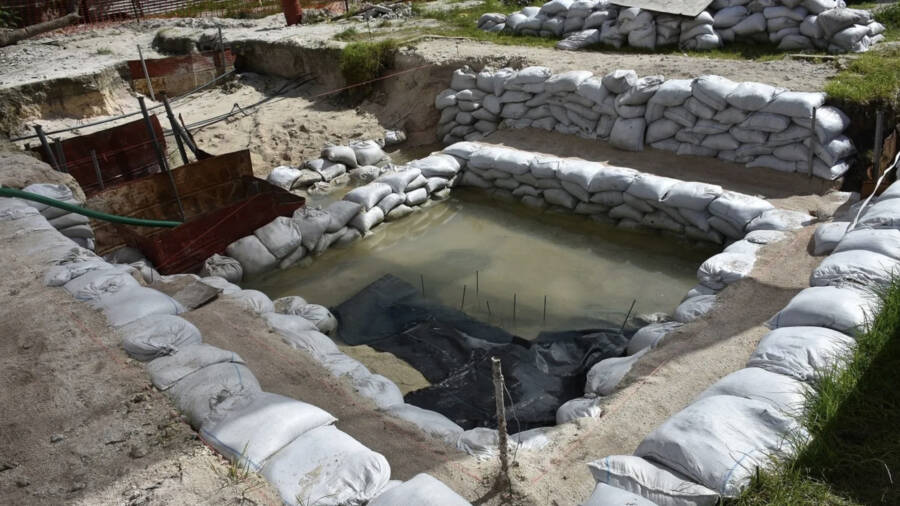 ERIC ALBERTSON/DEFENSE POW/MIA ACCOUNTING AGENCY/HISTORY FLIGHT The remains of 30 service members buried under the water table. They are to be transported to a Hawaiian lab in July for identification. June 1, 2019. Betio, Tarawa, Kiribati.

The Pacific Ocean theater of World War II, fought between the Allies and Japan, left many dead, injured, or missing, with countless American soldiers never returning home. The Battle of Tarawa in November 1943 in the modern-day Republic of Kiribati was one of the bloodiest battles of the war — with human remains being continuing to be uncovered to this day.

According to the Smithsonian, the nonprofit organization History Flight located the graves of 30 marines and sailors in the Pacific atoll of Tarawa. These are suspected to belong to members of the 6th Marine Regiment and will be transported to a lab in Hawaii in July to be analyzed and — hopefully — identified.

History Flight has thus far excavated at least 11 sites in Tarawa. The nonprofit was allowed to raze an abandoned building as part of its search — and that’s where most of the remains were buried. Many of them were underwater, forcing archaeologists to continuously pump out water during the dig.

A 2014 CBS Evening News segment on bringing home the lost Marines from the Battle of Tarawa.

The collective has, in total, successfully found the remains of 272 Marines and sailors on the island in the last 10 years. They’ve found them using military documents, eyewitness testimonies, dogs, and sophisticated radar technology.

In 2015, it found the bodies of 35 U.S. servicemen, including Medal of Honor winner 1st Lt. Alexander Bonnyman Jr. — who led an impossible attack on a Japanese bunker during the invasion. In 2017, History Flight found 24 more sets of remains.

Though hundreds of veterans have already been found, the nonprofit is confident there are at least 270 sets of remains yet to found and exhumed. The Battle of Tarawa took the lives of over 990 Marines and 30 sailors between Nov. 20 and Nov. 23, 1943.

The Pacific Theater Of 1943

The Central Pacific Campaign against Japan began with the Battle of Tarawa. According to History, 18,000 Marines were sent to the island of Betio in the Tarawa atoll. Thought to be a manageable assault, low tides and Japanese turrets on the coast quickly raised serious problems.

American landing craft were caught on coral reefs, turning U.S. troops into sitting ducks for the fortified Japanese defense. With no other option than to abandon ship and wade toward the island on foot, the U.S. suffered intense casualties before many even reached the shore.

The battle took 76 hours, and though the 4,500 Japanese troops initially seemed to have the upper hand, the Marines successfully took the island after three long days of uninterrupted skirmish. 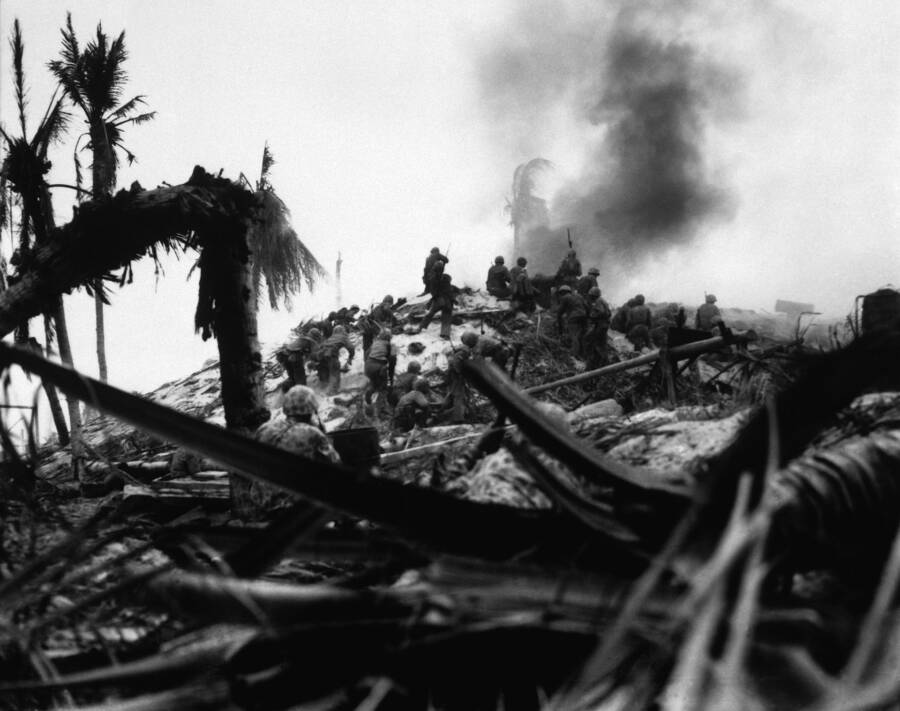 Wikimedia CommonsLt. Alexander Bonnyman and his assault party storm a Japanese stronghold. He posthumously received the Medal of Honor.

After previous victories at Midway Island in June 1942 and Guadalcanal in February 1943, U.S strategy focused on island-hopping across the central Pacific. The goal was to take the Marshall Islands, then the Mariana Islands, and ultimately, advance on Japan.

Commanders believed the 16 atolls comprising the Gilbert Islands to be the only way to engage in that strategy. Operation Galvanic began in November 1943 — with the Tarawa atoll. Seized by the Japanese in December 1941, the tiny island of Betio had become extremely fortified over the two years.

U.S. warships arrived on Nov. 19, 1943, with air bombardments and Naval attacks planned for the following morning. Things became more challenging than anticipated, however, with the 76-hour battle seeing nearly as many U.S casualties as the entire six-month campaign in Guadalcanal.

The Battle Of Tarawa

The U.S. would never encounter an atoll, or ring-shaped series of islands, more fortified than Tarawa. Japanese Admiral Keiji Shibazaki once boasted that America couldn’t take it if they had a million men and 100 years to do so. Betio itself was only two miles long and half a mile wide, and had 100 concrete bunkers lining its coasts.

A sophisticated trench system and seawalls, as well as an airstrip lined with coastal guns, machine guns, antiaircraft guns, and tanks made matters even more insurmountable. With the island’s shallow coral reefs littered with mines and barbed wire, it was an impossible mission to complete. 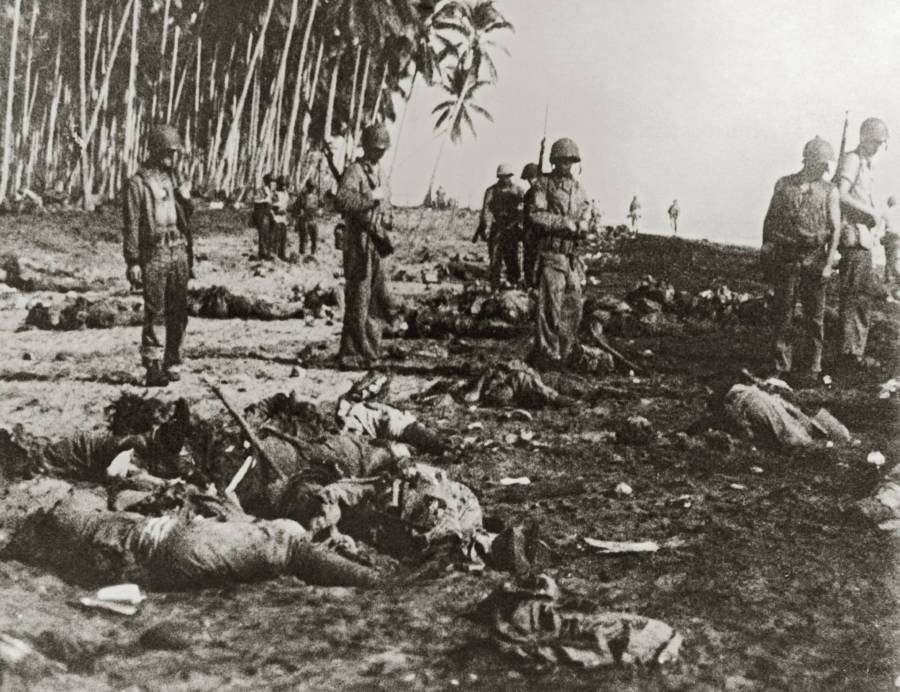 Keystone/Getty ImagesThe bodies of Japanese soldiers on the beach at Guadalcanal, after a disastrous attempt to land reinforcements by their infamous ‘Tokyo Express.’ The Battle of Tarawa saw nearly as many casualties in three days as the entire six-month campaign in Guadalcanal.

On the other hand, the U.S. had battleships, aircraft carriers, cruisers, destroyers, amphibious tractor vehicles, and 18,000 troops on its side. The “amphtracs” were new, and capable of traversing shallow reefs while carrying 20 troops each and being fitted with machine guns.

Though the plan was to engage in “Atoll War” — a new strategy that relied on air bombing an island right before troops on the ground would come ashore — things quickly went wrong. Choppy weather delayed troop movement, while the air raid was delayed. Support ships stayed in place for too long, and Japanese fire was intense and deadly accurate. 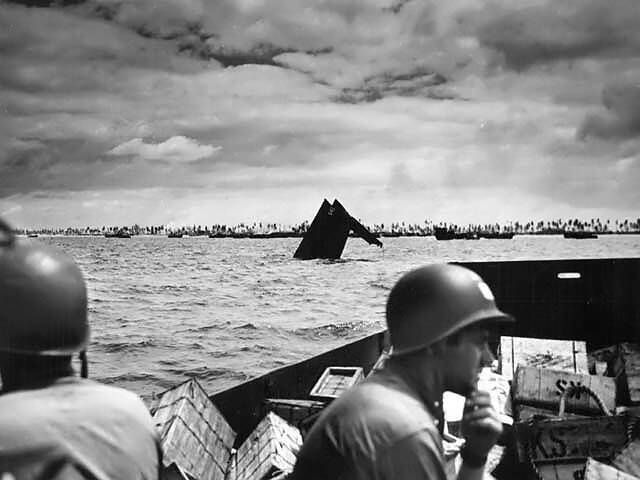 Most amphtracs managed to reach the shore as intended, but the other, heavier ships were stuck on the reefs due to shallow tides. Marines disembarked, waded toward the beach, breaking their radios in the water. Those who weren’t shot dead in the ocean arrived on Betio wounded or fatigued — with no way to communicate with anyone else.

By the end of the first day, 1,500 U.S. troops had died. Five thousand Marines landed on Betio alive. Two more days of fighting remained, in one of the most brutal battles of World War II.

Though the second day continued to pose the same problems as the first — low tides and coral-jammed landing craft — things got even worse. Japanese snipers had snuck into the lagoon overnight, positioned themselves on abandoned ships, and started sniping Americans from behind.

The scales began to tip around noon, however, when tides rose and U.S. destroyers could advance and provide supporting fire. Tanks and weapons finally made it to shore, and the fight became more balanced. 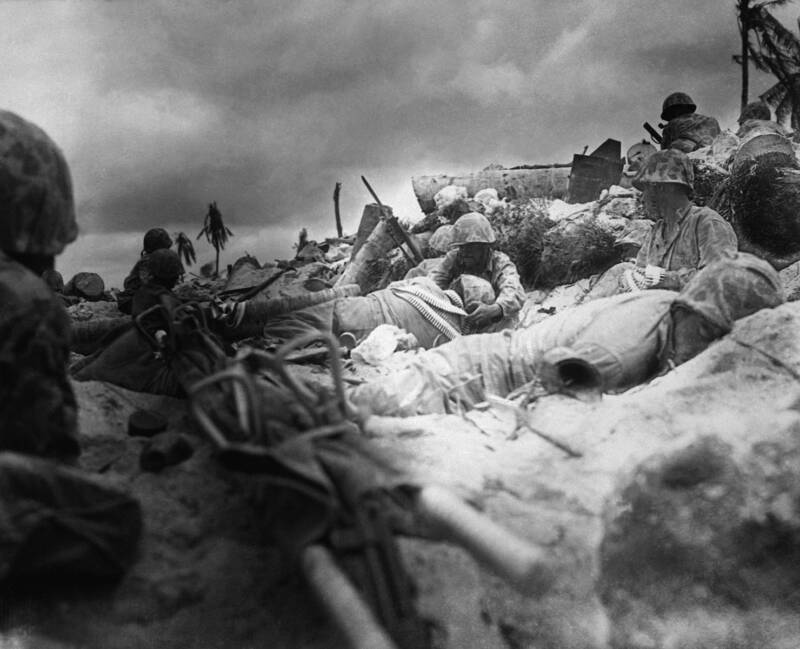 Wikimedia CommonsMarines seek cover among the dead and wounded behind the sea wall on Red Beach 3. Betio, Tarawa. Nov. 20-23, 1943.

Marines advanced inland, using flamethrowers, grenades, and demolition packs to their advantage. By the third and final day, the U.S. managed to destroy numerous bunkers.

The upper hand had abandoned Japan, which decided to engage in a hopeless, suicidal banzai charge on the night of Nov. 22. It was their last effort.

Most Japanese troops fought to the death. Only 17 of them remained alive as the sun rose on Nov. 23. As for the U.S., more than 1,600 troops were killed and 2,000 were wounded. When news of this battle reached the American public, the country was shocked by how vicious the Pacific theater had become. 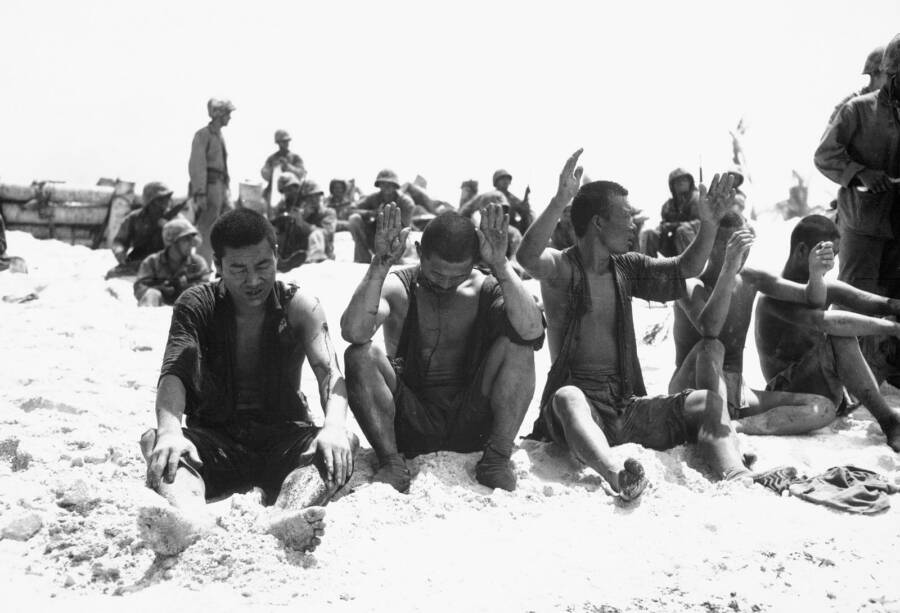 Wikimedia CommonsSome of the last living Japanese troops on Betio island after the Battle of Tarawa. Betio, Tarawa. November 1943.

As a result of the messy, unorganized effort, however, U.S. commanders applied lessons learned at Tarawa to future battles. Waterproofed radios, for instance, were refined and standardized. More precise reconnaissance and pre-landing bombardment were made an imperative.

Unfortunately, it took thousands of soldiers and sailors to die or be irrevocably wounded for these lessons to be employed. Meanwhile, the bodies of hundreds have remained on the island.

Most U.S. troops who died on Betio were buried in primitive graveyards with identifying markers on each grave. Navy construction soldiers, however, had to remove them to build airfields and various infrastructure to facilitate landing and transportation during the war.

In the late 1940s, the Army Graves Registration Service exhumed some of the bodies, moved them to a National Cemetery in Hawaii, and buried them as unknown soldiers. In 1949, the military told 500 families that their loved ones were still on Betio and couldn’t be recovered. 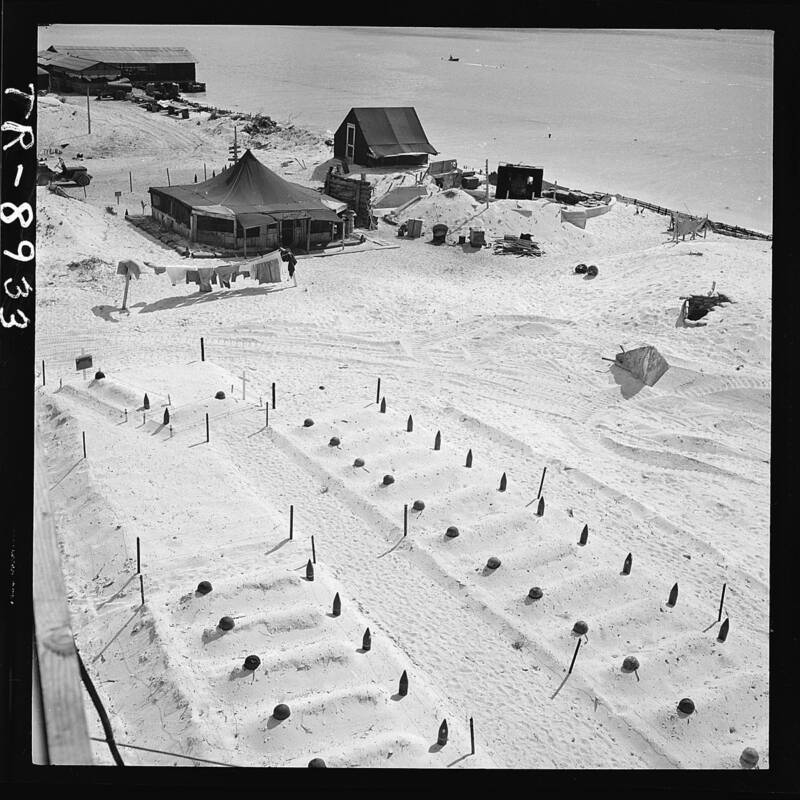 “The investment of 10 years of work and $6.5 million has resulted in the recovery of extremely significant, but not yet to be disclosed, number of missing American service personnel,” he said in 2017.

“Our trans-disciplinary team — including many volunteers — of forensic anthropologists, geophysicists, historians, surveyors, anthropologists, forensic odontologists, unexploded ordnance specialists, medics and even a cadaver-dog handler have excelled in difficult conditions to produce spectacular results.”

In the end, there’s much work left to be done. Hundreds of sets of remains of U.S. soldiers are still buried on the tiny island of Betio, thousands of miles away from their home. Fortunately, it seems as though History Flight isn’t slowing down in its mission to retrieve them, no matter what the cost.

After learning about the unearthing of 30 sets of remains of World War IIservice members killed during the Battle of Tarawa, read about the dark secrets of the Rheinwiesenlager, America’s WWII German death camps. Then, learn about Benjamin Salomon, the WWII dentist who killed 98 Japanese soldiers before being shot 76 times.