Samantha Smith Wanted Peace During The Cold War, So She Wrote The Soviets And Asked For It

With a simple letter, American schoolgirl Samantha Smith sparked peace and friendship between two nations during one of the tensest periods in modern history.

Samantha Smith chats with Tonight Show host Johnny Carson after her trip to the Soviet Union in 1983.

“Now I am certain the Russians, like the Americans, do not want war,” said Samantha Smith.

At 10 years old, American school girl Samantha Smith became a peace activist between the United States and the Soviet Union during the Cold War. Her letter to the Soviet Union’s General Secretary, Yuri Andropov, and subsequent visit to the USSR, altered the tense relationship between the two opposing countries.

Born on June 29, 1972 in a small town in Maine, Smith had an interest in international affairs from a young age. At the age of five, she wrote a letter of admiration to Queen Elizabeth II.

The Letter Sent by Samantha Smith

In November 1982, Samantha Smith wrote a letter to Andropov in order to better understand the tensions between the Soviet Union and the United States. 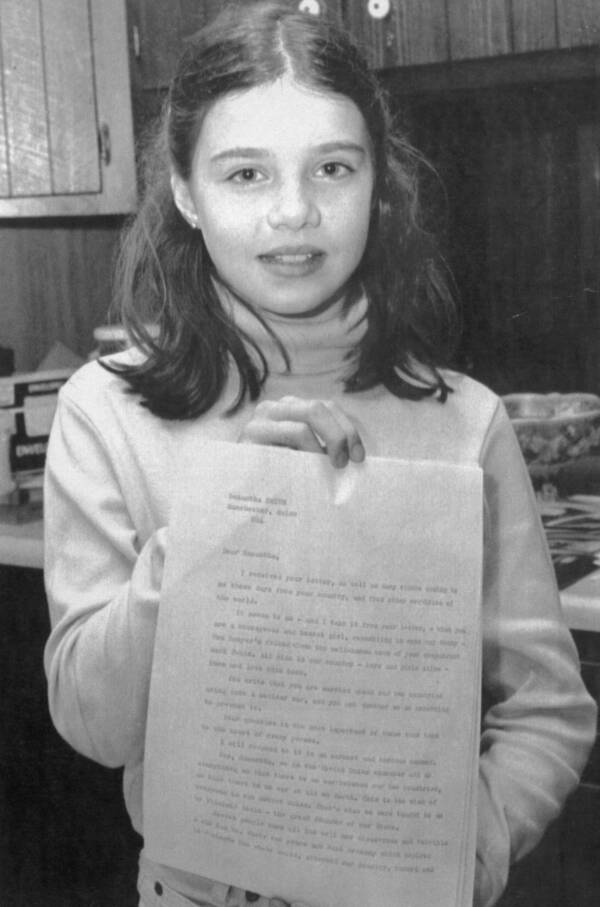 Bettmann/Getty ImagesTen-year-old Samantha Smith holds up the letter she received from Yuri Andropov, the head of the Soviet Union’s Community Party. April 1983.

“Actually, the whole thing started when I asked my mother if there is going to be a war,” said Smith in her book, Journey to the Soviet Union.

Her mother showed her an article about the Cold War in the November 1982 Time magazine, of which Andropov graced the cover, and suggested that her daughter write to the leader.

My name is Samantha Smith. I am ten years old. Congragulations [sic] on your new job. I have been worrying about Russia and The United States getting into a nuclear war. Are you going to vote to have a war or not? If you aren’t please tell me how you are going to help to not have a war. This question you do not have to answer but I would like it if you would. Why do you want to conquer the world or at least our country? God made the world for us to share and take care of. Not to fight over or have one group of people own it all. Please lets [sic] do what he wanted and have every body be happy too. 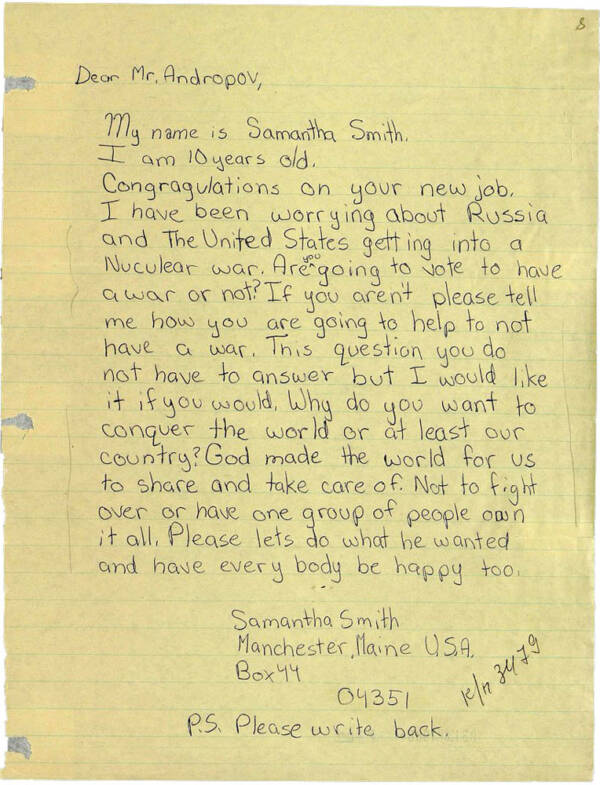 While her letter did not get a response right away, it was published in Pravda, a Soviet newspaper. Smith decided to write a second letter asking if Andropov intended to respond, this time addressed to the Soviet Embassy in Washington, D.C. She received her response a little over a week later.

Andropov’s response — in Russian, accompanied by an English translation — read:

I received your letter, which is like many others that have reached me recently from your country and from other countries around the world.

It seems to me – I can tell by your letter – that you are a courageous and honest girl, resembling Becky, the friend of Tom Sawyer in the famous book of your compatriot Mark Twain. This book is well known and loved in our country by all boys and girls. 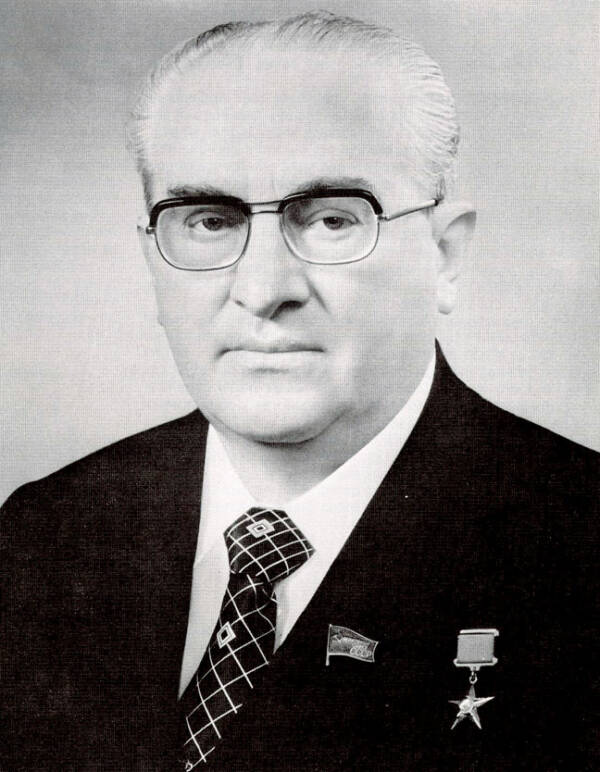 Embassy of the Union of Soviet Socialist Republics to the United States of America / Soviet LifeSoviet leader Yuri Andropov.

You write that you are anxious about whether there will be a nuclear war between our two countries. And you ask are we doing anything so that war will not break out.

Your question is the most important of those that every thinking man can pose. I will reply to you seriously and honestly.

Yes, Samantha, we in the Soviet Union are trying to do everything so that there will not be war on Earth. This is what every Soviet man wants. This is what the great founder of our state, Vladimir Lenin, taught us.

Soviet people well know what a terrible thing war is. Forty-two years ago, Nazi Germany, which strove for supremacy over the whole world, attacked our country, burned and destroyed many thousands of our towns and villages, killed millions of Soviet men, women and children.

In that war, which ended with our victory, we were in alliance with the United States: together we fought for the liberation of many people from the Nazi invaders. I hope that you know about this from your history lessons in school. And today we want very much to live in peace, to trade and cooperate with all our neighbors on this earth — with those far away and those nearby. And certainly with such a great country as the United States of America.

In America and in our country there are nuclear weapons — terrible weapons that can kill millions of people in an instant. But we do not want them to be ever used. That’s precisely why the Soviet Union solemnly declared throughout the entire world that never — never — will it use nuclear weapons first against any country. In general we propose to discontinue further production of them and to proceed to the abolition of all the stockpiles on Earth.

It seems to me that this is a sufficient answer to your second question: ‘Why do you want to wage war against the whole world or at least the United States?’ We want nothing of the kind. No one in our country–neither workers, peasants, writers nor doctors, neither grown-ups nor children, nor members of the government – want either a big or ‘little’ war.

We want peace — there is something that we are occupied with: growing wheat, building and inventing, writing books and flying into space. We want peace for ourselves and for all peoples of the planet. For our children and for you, Samantha.

I invite you, if your parents will let you, to come to our country, the best time being this summer. You will find out about our country, meet with your contemporaries, visit an international children’s camp – ‘Artek’ – on the sea. And see for yourself: in the Soviet Union, everyone is for peace and friendship among peoples.

Thank you for your letter. I wish you all the best in your young life.

Samantha Smith and her family took Andropov up on his invitation and departed for Moscow on July 7, 1983. 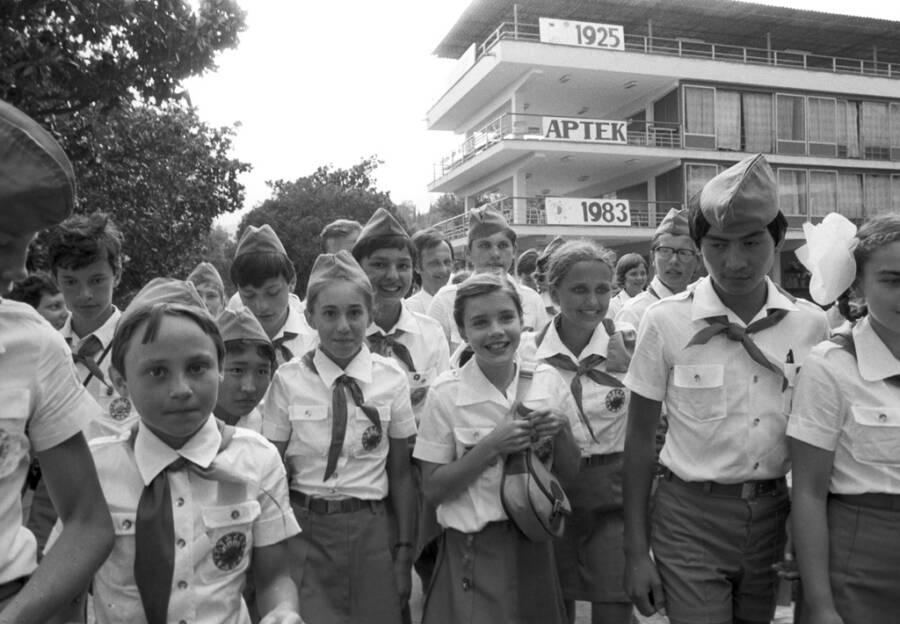 Yuryi Abramochkin / RIA Novosti archiveSamantha Smith with fellow campers at the “Artek” pioneer camp in the Soviet Union in July 1983.

In the Soviet Union, she spent two weeks as Andropov’s guest. Although the Soviet leader was too ill to meet with her during the trip, she met many Soviet children at the pioneer camp Artek, where she learned Russian songs and dances. Eschewing more privileged accommodations, Smith stayed in a dormitory with nine other girls, who were carefully selected for their English skills. One girl, a 13-year-old named Natasha, became fast friends with Smith.

At a press conference, Smith stated that the Russian people were “just like us.”

After this trip, Smith was named a Goodwill Ambassador. The media attention from her tour of the USSR also made her face and advocacy well-known in both the United States and the Soviet Union.

<embed caption="Samantha Smith's press conference in Moscow during her July 1983 trip to the USSR."]https://www.youtube.com/watch?v=3T4lZnGnY3A[/embed]

A few months later, in December 1983, Smith continued her peacemaking activities in Japan, where she met Prime Minister Yasuhiro Nakasone. She also attended the Children’s International Symposium in Kobe, where she gave a speech.

“Maybe it’s because I have traveled a lot and maybe it’s because I’ve met so many wonderful people who look a little different from the way I look – maybe their skin, or their eyes, or their language is not like mine – but I can picture them becoming my best friends,” she said.

During this speech, she also called for a program called the International Granddaughter Exchange in which political leaders in nations all across the globe would send their grandchildren to live with families of "opposite nations." By her logic, leaders wouldn't go to war with countries where their grandchildren have friends.

“If we start with an International Granddaughter Exchange and keep expanding it and expanding it, then the year 2001 can be the year when all of us can look around and see only friends, no opposite nations, no enemies, and no bombs,” she said.

A year later, she hosted a special on the U.S. presidential election for the Disney Channel called Samantha Smith Goes to Washington…Campaign ’84. On the special, she interviewed several candidates, including George McGovern and Jesse Jackson.

The Untimely Death of Samantha Smith

On August 25, 1985, Smith and her father were returning home to Maine after filming a segment for Lime Street, a show that she had just begun acting on. The Bar Harbor Airlines Flight 1808 struck trees 4,000 feet short of the runway of the Lewiston-Auburn Regional Airport and crashed, killing everyone on board. 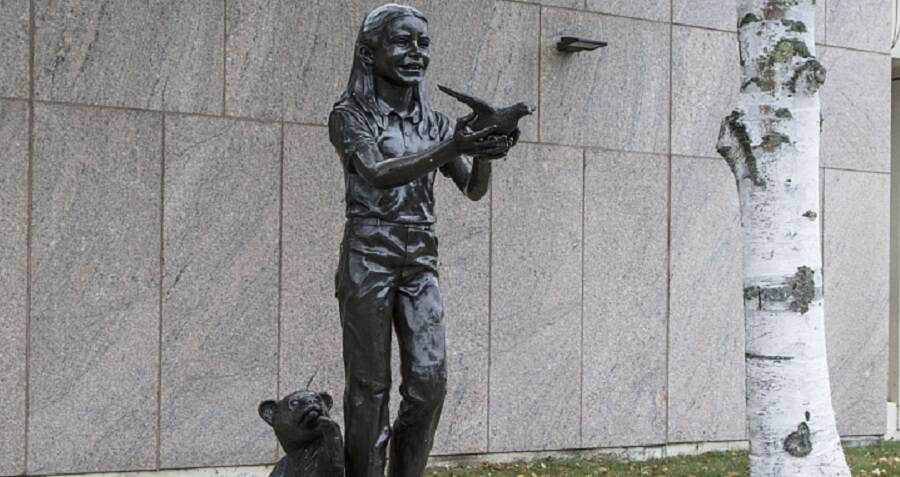 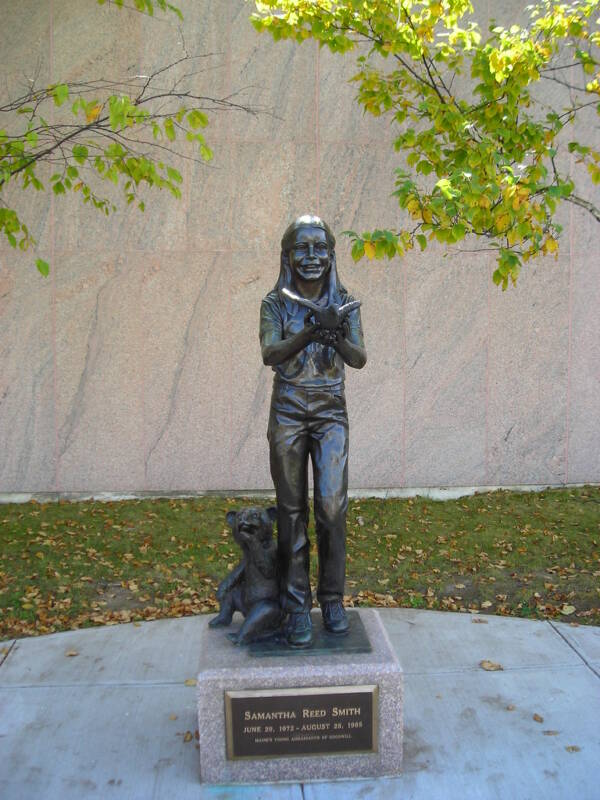 After investigating the crash, authorities found no evidence of foul play.

Samantha Smith’s funeral was held in Augusta, Maine with a thousand people in attendance. She and her father were cremated, and their ashes were buried in Maine’s Estabrook Cemetery in Maine.

At her funeral, the Soviet ambassador to the U.S. read a statement from Mikhail Gorbachev:

Everyone in the Soviet Union who has known Samantha Smith will forever remember the image of the American girl who, like millions of Soviet young men and women, dreamt about peace, and about friendship between the peoples of the United States and the Soviet Union.

Her television show, Lime Street, was canceled after her horrible death. But before the cancellation, the show’s creator, Linda Bloodworth, vowed to dedicate every episode to Smith’s memory. “If we do a hundred episodes that dedication will be seen for 20 years all over the world,” she said. “That is our goal.”

Although her life was cut short, Samantha Smith’s legacy has lived on long past her death. 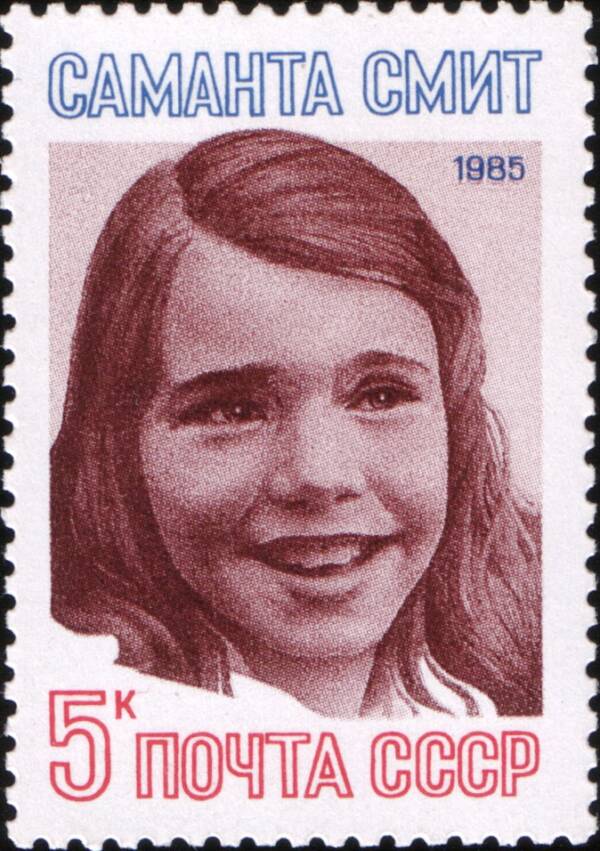 In October of 1985, only a couple of months after the plane crash, Smith’s mother established the Samantha Smith Foundation, which sponsored and organized summer exchanges for Soviet and American youth between the ages of 11 and 16. In 1990, the foundation brought a group of children from the Chernobyl fallout zone to the United States. It also organized an internship program in the U.S. targeted at young adults from the USSR.

Smith’s legacy was so profound and the foundation was so successful that it brought on its own demise. As Soviet-American exchanges became part of mainstream culture and after relations between the two nations opened up, the foundation’s programs dissolved.

Since then, Smith has been remembered in both Moscow and Maine with monuments depicting her peaceful and friendly spirit. The Soviet Union also issued stamps with Smith to commemorate her advocacy.

“I think her story is as relevant as ever,” said Laurie LaBar, the chief curator of history and decorative arts for the Maine State Museum. “Particularly for people who may feel they don’t have any influence, a story like this is refreshing. Because it shows you can make a difference, if you speak the truth.”

Now that you’ve read the inspiring story of the young peacemaker Samantha Smith, read about these eight real-life heroes who saved the world. Then, read about Vasili Arkhipov, the Soviet submarine commander that prevented World War III.