Officials disagree on whether or not this controversial practice is unfairly maligned. 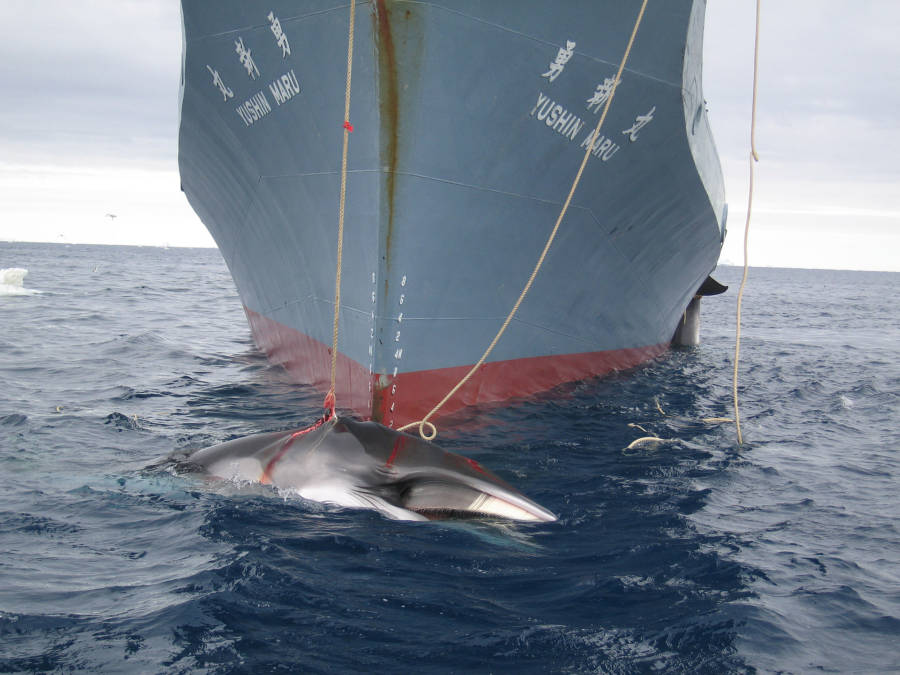 Wikimedia CommonsA whale is captured by the Yushin Maru, a Japanese harpoon vessel. This image was taken by Australian customs agents in 2008, under a surveillance effort to collect evidence of indiscriminate harvesting, which is contrary to Japan’s claim that they are collecting the whales for the purpose of scientific research.

Every year, a fleet of Japanese ships embarks on an Antarctic journey to kill hundreds of whales.

In order to get around the rules, they insist that the taxpayer-funded slaughters are for scientific research though those claims were debunked by an International Court of Justice ruling in 2014.

The commission ordered Tokyo to stop and, for a year, the government complied — conducting a scientific mission in 2015 during which whales were counted and remained unharmed.

In the past two years, though, the world was shocked to see crews taking off with their hunting tools once again, with Japanese leaders arguing it’s an unchangeable part of their culture.

It’s true that the country has been hunting whales for centuries — but it’s hard to make a historic argument for these four-month missions halfway around the world.

Those didn’t start until just after World War II when, faced with a starving population, the government converted US Navy tankers into whaling ships to feed the masses — making the dark red meat the biggest source of protein in Japan for the next two decades.

But according to the Japanese branch of Greenpeace, citizens aren’t really eating whale anymore — with the average person consuming about one ounce per year.

“There is no benefit to Japan from whaling…but nobody knows how to quit,” Junko Sakuma, who researches the trade in Japan, told the BBC.

Some Japanese might argue that they haven’t quit because there’s no good reason to stop.

“Japanese people never eat rabbits, but we don’t tell British people that they shouldn’t,” one official told the BBC.

Protestors might point out that whales are endangered and rabbits are not.

But the minke whale — the only species targeted — actually has a relatively stable population, according to the International Whaling Commission.

So, while the Japanese government is arguing that they won’t stop whaling because it’s a historical part of the culture (it’s not), they’re conducting scientific research (they’re not), and people eat the meat (they don’t), environmental activists are arguing that the hunting is harming an endangered animal (it’s not).

It’s probable, according to one government official, that the reasons for the ongoing trade are actually mostly due to political bureaucracy. Of course.

Next, learn why scientists are baffled by humpback whales forming supergroups. Then, take a look inside Japan’s World War II-era reign of terror.