For nearly a decade, the FBI stalked and slandered Jean Seberg until her suicide in 1979 — and all for supporting civil rights.

While some actresses etch themselves into the collective consciousness by way of charm, good looks, talent, or all three, some are remembered for their tragedies. Such is the case for French New Wave cinema icon Jean Seberg.

After ascending to the heights of Hollywood, Seberg used her influence to promote progressive social reforms. Her support of the Black Panther Party, however, would be her undoing. The FBI smeared her legacy. Hollywood chewed her up. She was viciously harassed by her own government.

While large swaths of people likely do not know Seberg’s full story or even her name, they will soon be introduced to her by way of the upcoming film starring Kristen Stewart as the ill-fated actress.

Until then, here’s everything you need to know about the destruction of Hollywood star Jean Seberg at the hands of the American government. 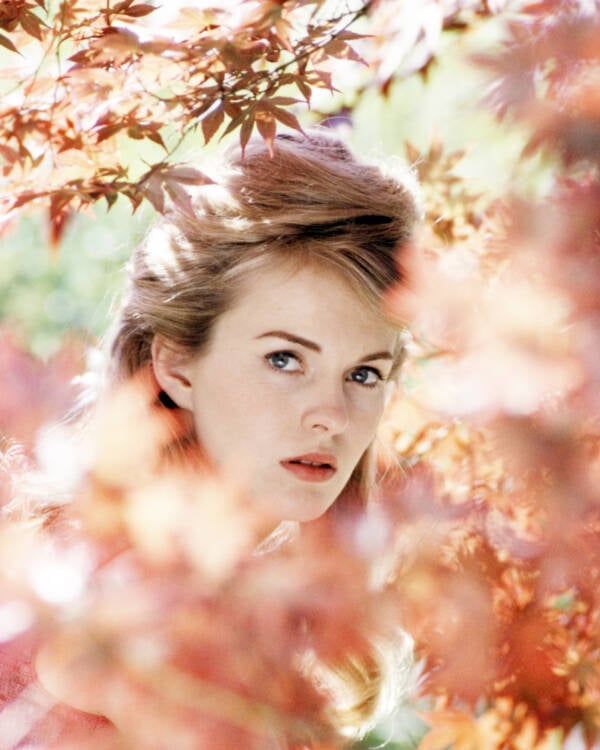 Born in Marshalltown, Iowa in 1938 to a pharmacist and substitute teacher, everything about Seberg’s upbringing suggested a life of relative normalcy.

But after graduating high school, Seberg enrolled at the University of Iowa to study film and theater.

It was in 1956, just before her 18th birthday, that Seberg’s fate was sealed. Seberg’s neighbors had entered her name into a pool of 18,000 actresses for an open casting call.

She was cast as the coveted title role in the Otto Preminger film Saint Joan. Her casting appeared to Hollywood to come out of thin air; no one had heard of Jean Seberg at this point. 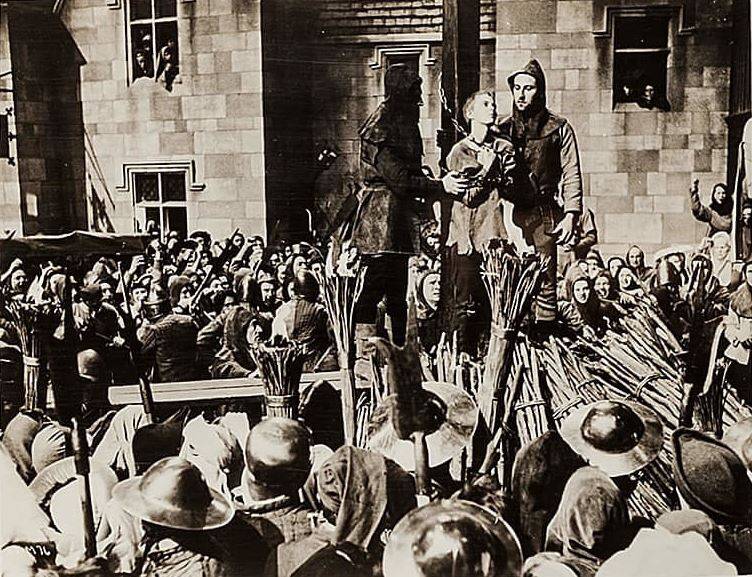 IMDbA shot of Seberg playing Joan of Arc in her first major role.

A true ingenue, the only acting Seberg had done up to the point of Saint Joan had been one season of summer stock performances.

Due in part to the highly publicized search for the star of Saint Joan, the film and Seberg herself were subjected to heavy media scrutiny. As such, upon the film’s highly anticipated release, both Jean Seberg and the film were met with cool to negative reviews. Speaking candidly about her crash-landing into Hollywood Seberg recalled:

Despite the fact that her performance was universally panned, Otto Preminger gave Jean Seberg a second chance. He cast her as the lead role in his next film, Bonjour Tristesse. Of his decision to work with the clearly very green actress, Preminger said;

“It’s quite true that, if I had chosen Audrey Hepburn instead of Jean Seberg, it would have been less of a risk, but I prefer to take the risk. I have faith in her.” 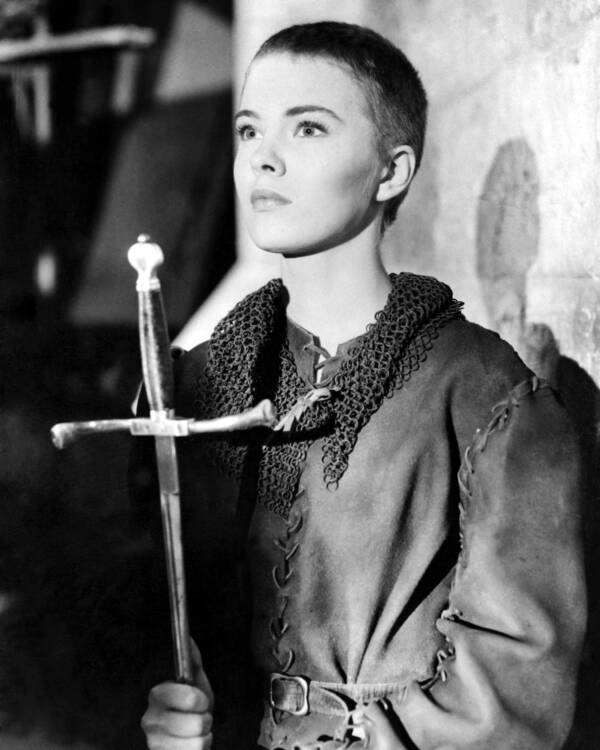 Despite all of his faith in Seberg, Preminger couldn’t draw a performance from her that wasn’t met with scathing reviews. The New York Times called her a “misplaced amateur.” The The New Yorker said Seberg’s acting “makes one want to give her a long, and possibly therapeutic, paddling…”

Seberg nonetheless made the most of her time in France while filming Preminger’s Bonjour Tristesse, when she met François Moreuil, the man who would become her first husband. The match prompted her to relocate to France permanently, where she would eventually become a well-known and welcome face in French cinema.

An interview with Jean Seberg at home in Paris in 1960.

Seberg’s true break came after starring in the highly praised Jean-Luc Goddard film Breathless, where she played the girlfriend of a wandering criminal.

The international success of the film helped critics to warm to her, with one publication even hailing her as “the best actress in Europe.”

Seberg’s star-making turn in Breathless undoubtedly helped her secure more roles both in America and France.

A scene from Seberg’s Breathless.

One of her more prominent roles in the United States was alongside Warren Beatty in 1964’s Lillith in which she played the titular role.

Seberg’s performance was once again praised and was ultimately the role that forced her skeptics to take notice of her as a serious actress once and for all.

A Ruinous Run-In With The Law

Offscreen, Seberg was known for her progressive social activism. 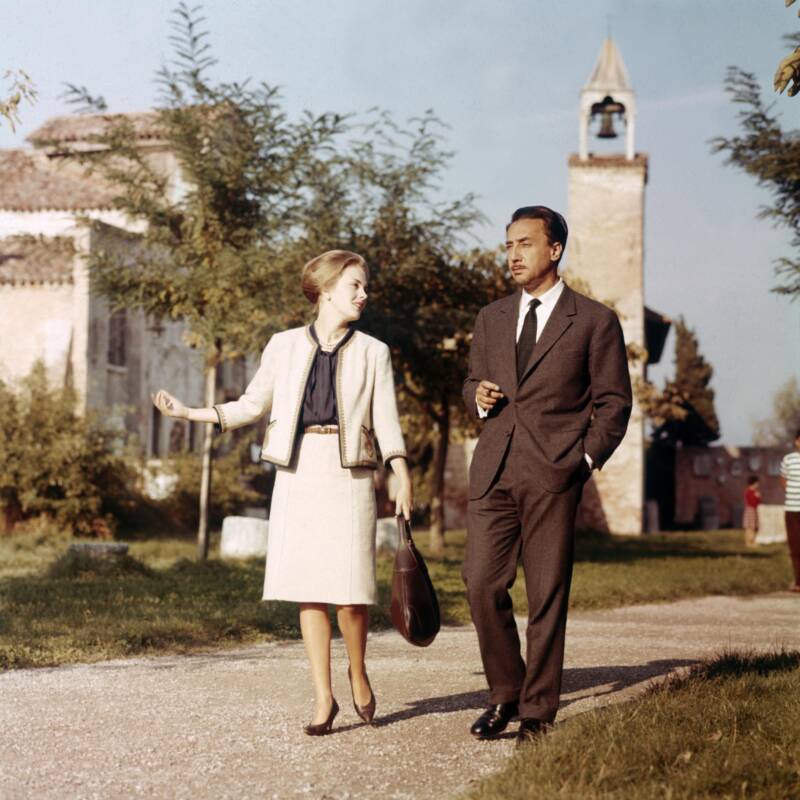 Keystone-France/Gamma-Keystone via Getty ImagesSeberg and her second husband, Romain Gary, in Venice.

Along with a phone call to then-Black Panther leader Elaine Brown, these actions raised suspicions from the FBI about Seberg’s alliances.

By 1956, the United States Federal Bureau of Investigation under Edgar J. Hoover had become a paranoid institution. Hoover thus crafted a covert counterintelligence program called COINTELPRO whose primary mission was to target private citizens deemed too dangerous to the status quo, including civil rights and social activists, feminist organizations, the Communist Party, and anti-Vietnam war protesters. 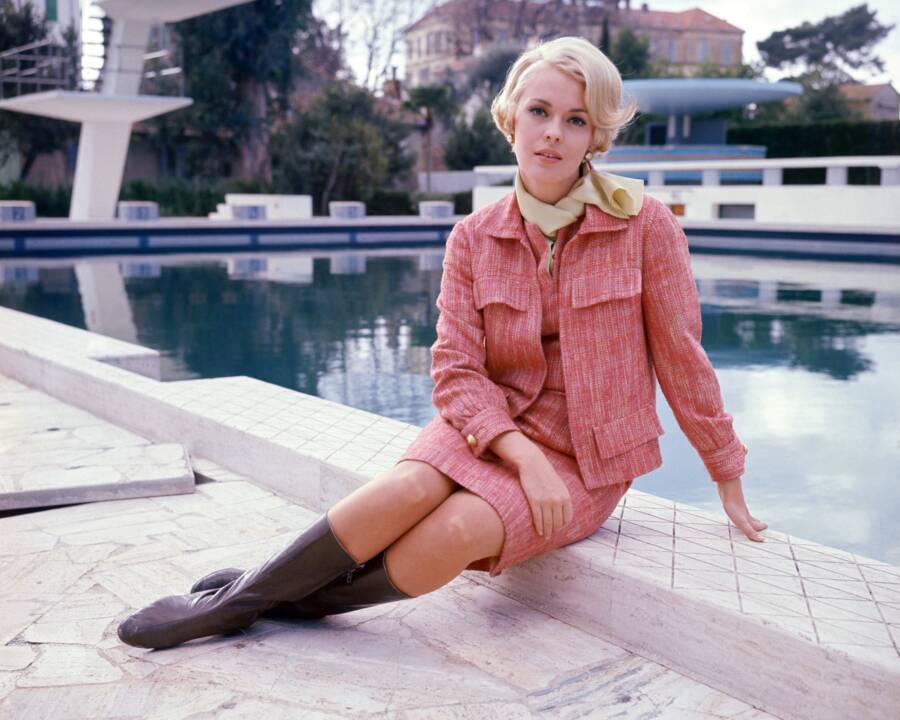 In essence, COINTELPRO was “the name given to a series of programs initiated by the Bureau between 1956 and 1971 aimed at undermining and eradicating groups, movements, and individuals — almost all of which were part of the Left — it viewed as threats to national security and social order.”

Jean Seberg would not be the only private citizen or celebrity to fall prey to these nefarious tactics. Indeed, Martin Luther King Jr. was a top priority for COINTELPRO. The organization sent his wife audio recordings of him with other women and sent him “suicide packets” full of blackmail intended to make him kill himself.

Seberg’s support of such progressive programs thus made her a perceived threat to her own government (they believed) and prompted the FBI to begin a long and brutal campaign against her.

Seberg’s run-ins with the FBI began in 1970, shortly after she became pregnant by her second husband, novelist Romain Gary.

According to a document dated April 27, 1970, the FBI released a false tip to the Los Angeles Times which stated that Romain Gary was not the father of Seberg’s unborn child, but rather a member of the Black Panther Party was.

The FBI “felt the possible publication of Seberg’s plight could cause her embarrassment and serve to cheapen her image with the general public.” 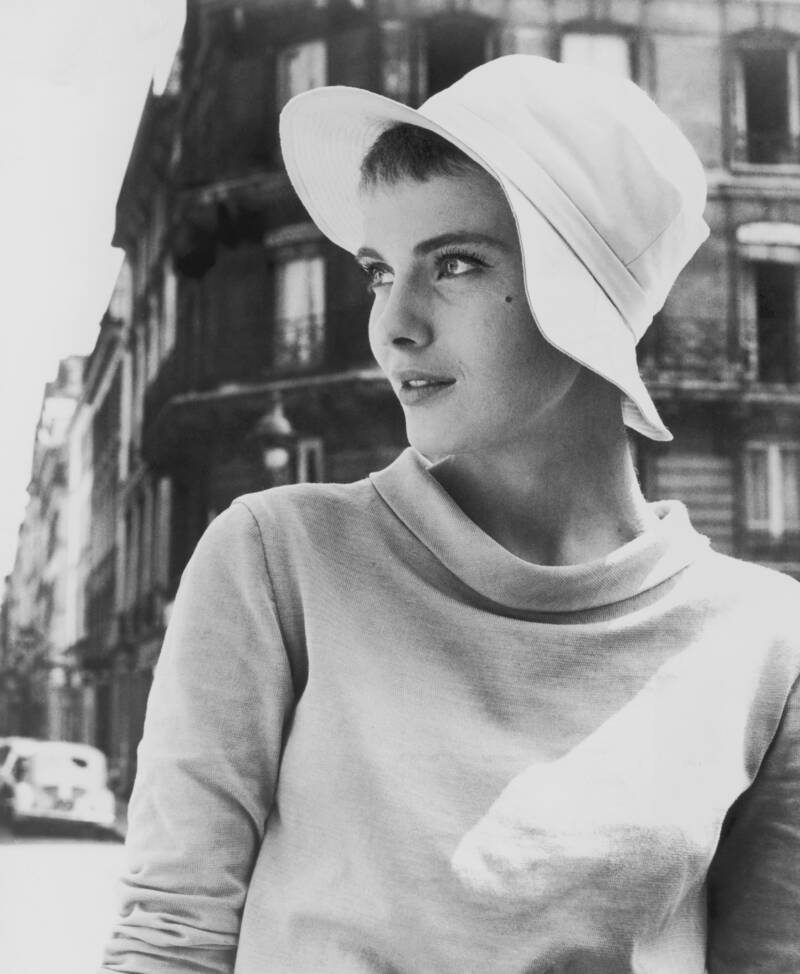 This rumor was particularly damning in 1970s America. The Los Angeles Times ran the story under a fake name. Newsweek ran the story under Seberg’s real name. G. C. Moore, an official in COINTELPRO, wrote that Seberg was a “promiscuous and sex-perverted white actress.”

Seberg was naturally shattered by the slander. She was so intensely stressed during her pregnancy that she suffered a mental breakdown and gave birth to her child prematurely. Her daughter, Nina Hart Gary, died two days later. 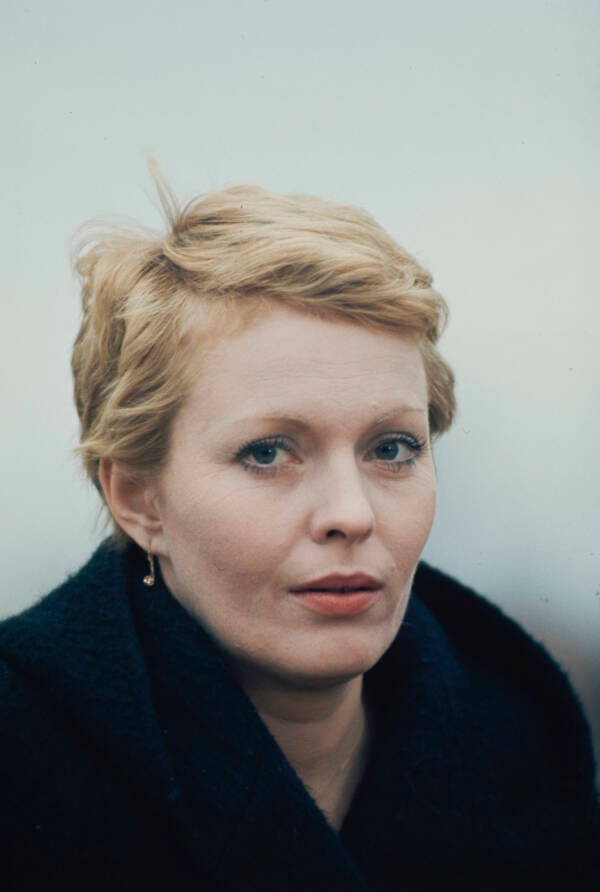 Jean-Claude FRANCOLON/Gamma-Rapho via Getty ImagesThis photo was taken several years before her suicide.

Seberg and Gary sued Newsweek for libel and were awarded $20,000 in damages, but no sum of money could possibly have compensated them for the loss of their child.

In addition to libel, the actress was also reportedly harassed by the FBI for years following the death of her child. It was self-reported by Seberg and later confirmed by declassified FBI files that she was stalked, wire-tapped, and generally surveilled while she spent time abroad in Switzerland and in France.

Records also show that Hoover kept President Richard Nixon well-informed about the ongoing effort to “neutralize” Jean Seberg. These were all attempts to prevent Seberg from participating in progressive causes deemed dangerous by the FBI, but they also undoubtedly led to a steady decline in her mental health and overall stability.

This would ultimately be her undoing. 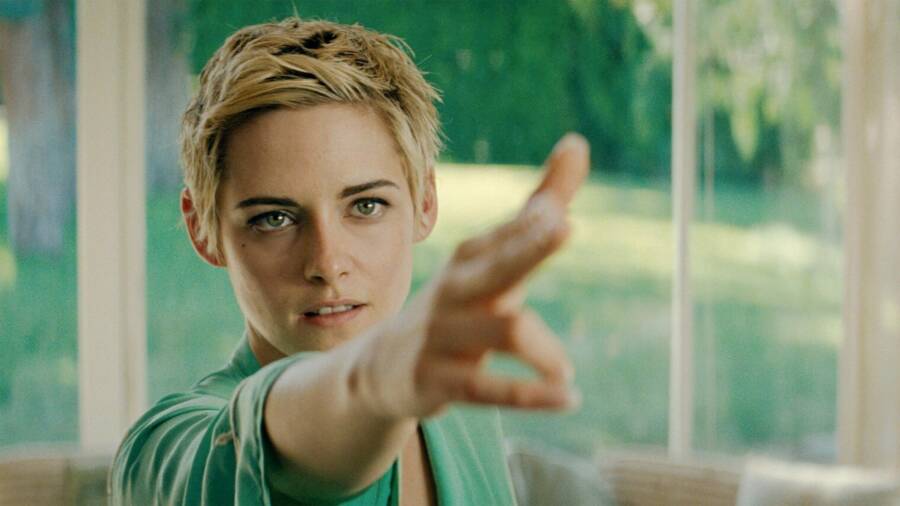 Amazon StudiosKristen Stewart stars as the late actress in the upcoming biopic, Seberg.

Seberg said in a 1974 interview that she “cracked up” after her baby died. She went home to Marshalltown to bury her. “I did the whole deal,” Seberg reported.

“We opened the coffin and took 180 photographs and everybody in Marshalltown who was curious what color the baby was got a chance to check it out.”

According to Romain Gary, every year thereafter Seberg tried to commit suicide on the baby’s birthday. In June 1979, her fourth husband reported that she threw herself in front of a train. Eventually, she would succeed.

On Aug. 30, 1979, 40-year-old Jean Seberg disappeared in Paris. Ten days later, her decomposing body was found wrapped tightly in her own blanket in the backseat of her own car, parked near her own apartment.

The local authorities found a bottle of barbiturates and a note written in French that was addressed to her son with Gary, Diego, that simply stated:

“Forgive me. I can no longer live with my nerves.”

Her death was ultimately ruled a probable suicide.

But authorities suspected Seberg could not have caused her death alone. A toxicology report showed that she had a coma-inducing amount of alcohol in her system, meaning she never would have been able to get into her car and move it on her own before dying in her car. Moreover, alcohol was never found in the vehicle.

Paris authorities therefore initially believed that somebody had moved her body after she died, but they never could point out a suspect and so the investigation was dropped.

The FBI admitted via documents released under the Freedom of Information Act that they had in fact taken part in actively defaming Seberg for years.

The revelation sparked national interest and TIME ran a story under the headline: “The FBI vs. Jean Seberg.”

Besides film buffs, many have likely never heard the tragedy of Jean Seberg. However, Kristen Stewart will soon appear as the doomed actress in an upcoming biopic entitled Seberg, which is set to hit theaters in December 2019.

Modern audiences may now have a chance to better understand how an ultimately innocent actress was destroyed by the machinations of the U.S. government.

A trailer for the upcoming biopic on Jean Seberg.

In an article from the National Endowment for the Humanities from 2016, Kelly Rundle, co-director of the Seberg documentary Movie Star: The Secret Lives of Jean Seberg, perhaps best explains the ways in which Seberg has been all but forgotten to history:

“There’s an odd sort of amnesia about Jean Seberg in the United States, which is so puzzling to me. At her peak, she was on the cover of every magazine…but what’s the most surprising is how successful the neutralization campaign was.”

Such is the power of a relentless cycle of gossip, fame, and fear. The small-town all-American girl never stood a chance against her own government. Her story is a portrait of how fantasy seeps into even those powers we thought were supposed to rely on reason.

As it turns out, Hollywood isn’t the only place for performance, lies, and make-believe. These things happen in our own government.

After this sobering look at the life and demise of actress Jean Seberg, read about another talent extinguished too quickly in the story of Playboy’s Dorothy Stratten. Then, explore the truth behind another government conspiracy inside Area 51.