The Jefferson Bible Shows What The President Really Thought Of Christianity

By All That's Interesting | Edited By Wyatt Redd

The Jefferson Bible would not go over well with some Christians today.

Thomas Jefferson is often remembered as one of the most intelligent Founding Fathers. And that reputation was well-deserved. Jefferson spoke six languages and taught himself everything from agriculture to engineering. He was a mathematician, a philosopher, and a life-long patron of learning.

To Jefferson, there was nothing that couldn’t be understood with a bit of careful study. 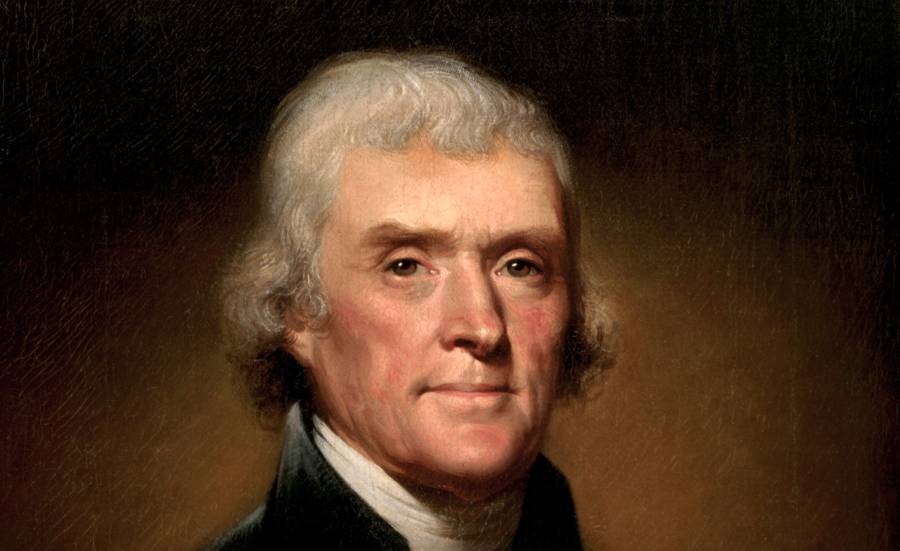 In 1820, Jefferson turned his genius towards his most ambitious project yet: he was going to discover the true nature of Jesus.

According to Jefferson, the Jesus that most people see in the Bible was an invention of early Christians. In trying to convert pagan Romans and Greeks to their religion, they mixed pagan elements and supernatural events into the story of Jesus of Nazareth. For Jefferson, discovering the real Jesus was as simple as cutting those parts out… literally.

Armed with a razor blade and glue, Jefferson thumbed through the New Testament and cut out any passages that he thought too fantastical to be real. With these parts removed, Jefferson glued the passages he wanted to keep back into a single book. Jefferson had essentially created a new version of the Bible.

In this new New Testament, the only text allowed to stay were statements and messages that Jefferson decided came directly from Jesus himself or were accurate depictions of history.

“I have performed this operation for my own use,” he wrote, “by cutting verse by verse out of the printed book, and arranging the matter which is evidently his, and which is as easily distinguishable as diamonds in a dunghill.” 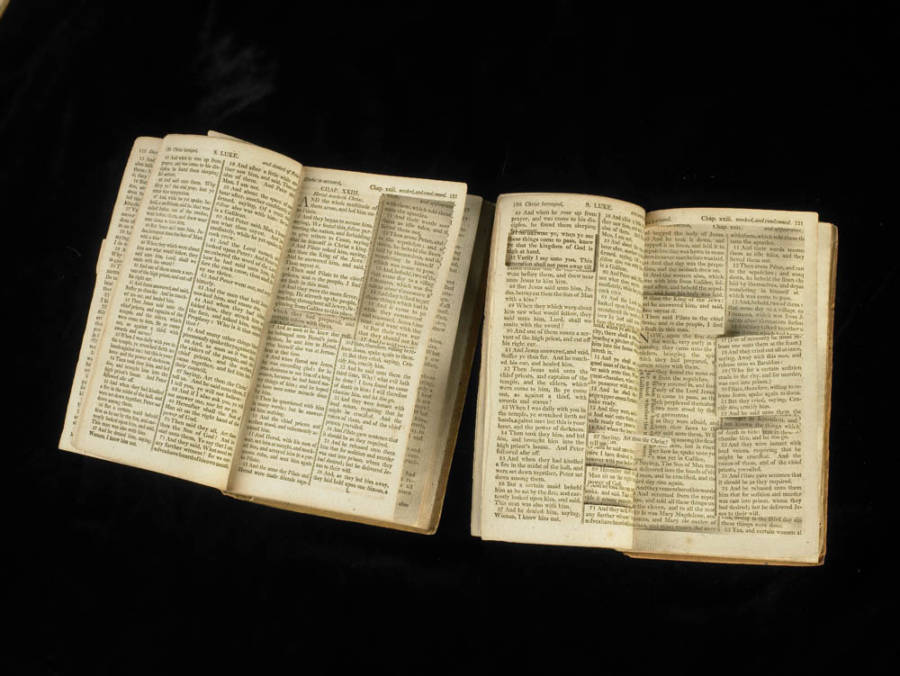 National Museum of American History/ FlickrThe source books Jefferson cut the passages out of for his Bible.

In the Jefferson Bible, there are no references to the supernatural. There are no angels or demons or prophecy. And most significantly, Jesus is never resurrected from the dead.

So, how can a Christian Bible not include one of the most important elements of the faith?

Well, in Jefferson’s opinion, Jesus never was resurrected. That’s because he wasn’t divine. He was simply a teacher of morality. It was a morality that Jefferson greatly respected as one of the best codes of living ever imagined. But its author was still only a man.

“A man,” as Jefferson described him, “of illegitimate birth, of a benevolent heart, [and] enthusiastic mind, who set out without pretensions of divinity, ended in believing them, and was punished capitally for sedition by being gibbeted according to the Roman law.”

Jefferson believed that the world could be understood without any need for the supernatural. Everything could be rationally ordered and classified with some thought. Jefferson was simply applying this attitude to Christianity. And the result was a new understanding of the nature of Jesus.

But while Jefferson didn’t believe in the divinity of Jesus, he would argue that he was still a Christian. In fact, he was more of a Christian than just about anyone.

“I am a real Christian,” he wrote, “that is to say, a disciple of the doctrines of Jesus.” In Jefferson’s mind, only his Bible contained Jesus’s true message.

All the same, Jefferson didn’t have much interest in teaching his new Bible to other people. Above all, this was a personal project to satisfy Jefferson’s intellectual curiosity. He showed the Bible to a few close friends, but always resisted any attempt to publish it.

Since then, the Jefferson Bible has been kept in museums and reproduced in several forms as an important relic from the mind of one of the more interesting and influential Founder Fathers.

If you’re interested in reading the passages that Jefferson thought were the most essential to Christianity, the full text is available on the Smithsonian’s website.

Enjoy this article about the Jefferson Bible? Next, read about Thomas Jefferson’s dark side. Then check out these fascinating presidential facts.