When most people go on trips, they think of themselves as outsiders. When some go to Jerusalem, they think they're Jesus. 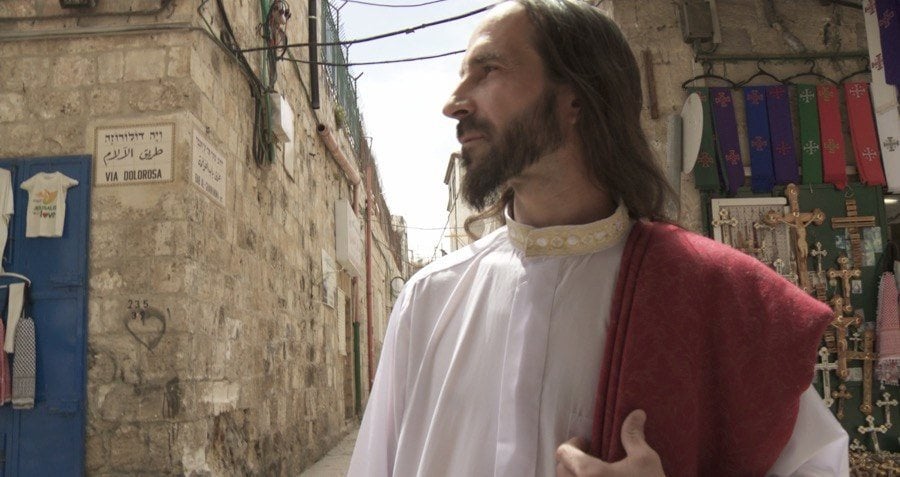 Courtesy of Katarzyna Kozyra Foundation and Postmasters Gallery A still from the Polish artist Katarzyna Kozyra’s documentary about Jerusalem Syndrome. The man pictured claims he is Jesus.

Imagine you’ve spent your life building a home for you and your family in Iowa. Your spouse is a registered nurse, you’re a firefighter, and your children sleep at night in the home you both have worked hard to provide.

The next thing you know, you’re in Jerusalem, ripping up your hotel sheets and then hitting the street corner to preach in your homemade toga.

You’ve contracted something called Jerusalem Syndrome, and now you and your children are in a tent on a city hillside, waiting for the apocalypse as you proclaim yourself Samson (or King David) in the meantime.

The crazy part, though? You’re not crazy. You have no history of depression or anxiety, and if you had just chosen another vacation spot, you would be fine. What’s given you the sudden God complex, then? Something called Jerusalem Syndrome.

As its name suggests, the affliction hits people who visit Jerusalem. As the sheer outlandishness of the symptoms suggests, many health professionals doubt that the syndrome actually exists in a scientifically verifiable way. Indeed, the Diagnostic and Statistical Manual of Mental Disorders doesn’t list Jerusalem Syndrome as a valid diagnosis for a given illness, because no one has been able to prove that the religious delusions are not tied to hidden, underlying mental health issues.

Even if not medically valid, the hysteria has been around for some time. Heinz Herman, an Israeli psychiatrist, first clinically described the syndrome in the 1930s, and it’s common enough that people in Jerusalem — from reverends and U.S. consulate officials to hostel managers and tour guides — can spot the symptoms from a mile away.

The cure? This is where Dr. Yair Bar-El comes in.

Bar-El wrote the definitive paper on Jerusalem Syndrome back in 1999, just as authorities worried that the new millennium would inundate the city with Jerusalem Syndrome sufferers (as with Y2K, that didn’t happen). Now, Bar-El works at Kfar Shaul Mental Health Center, where he treats patients exhibiting signs of Jerusalem Syndrome.

And that starts with first looking for a few bizarre symptoms.