The 26 Most Unbelievably Sexist Ads You’ve Ever Seen

These unbelievably sexist ads from decades past and present reveal both how far society has come and how much further we need to go.

As trite as it is true, sex sells. But sometimes — from our Mad Men past to our Snapchat and smartphone-filled present — advertisers take this truism a little too far, and turn shameless sex into abject sexism. Case in point? These sexist ads:

Stacked: a trait microwaves and attractive women apparently have in common 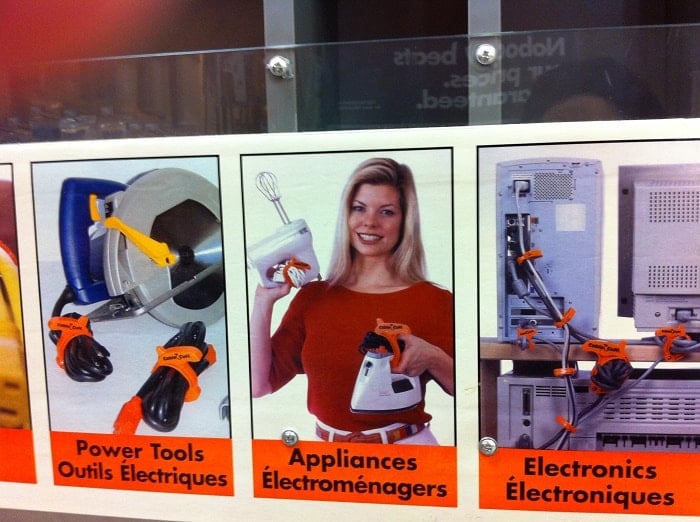 In this relatively recent Canadian ad, Home Depot demonstrates the fact that not even time can kill sexism.Flickr/Frankenmedia

Hertz assures us their female attendants have brains 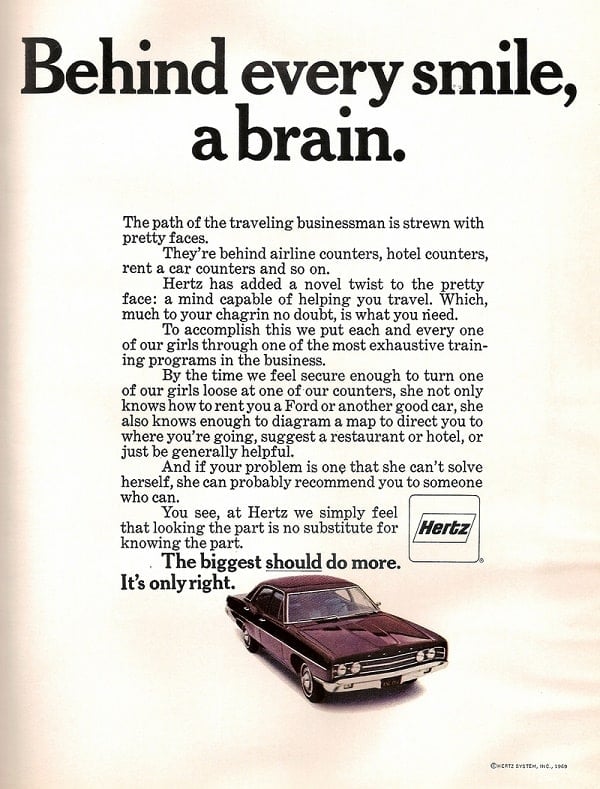 Hertz has come a long way in its advertising, but like a lot of older companies, they've got a bit of a sexist past in terms of advertising choices. For example: this advertisement promoting the fact that Hertz service women have brains as well as smiles. Flickr/classic_film

Men are better than women... 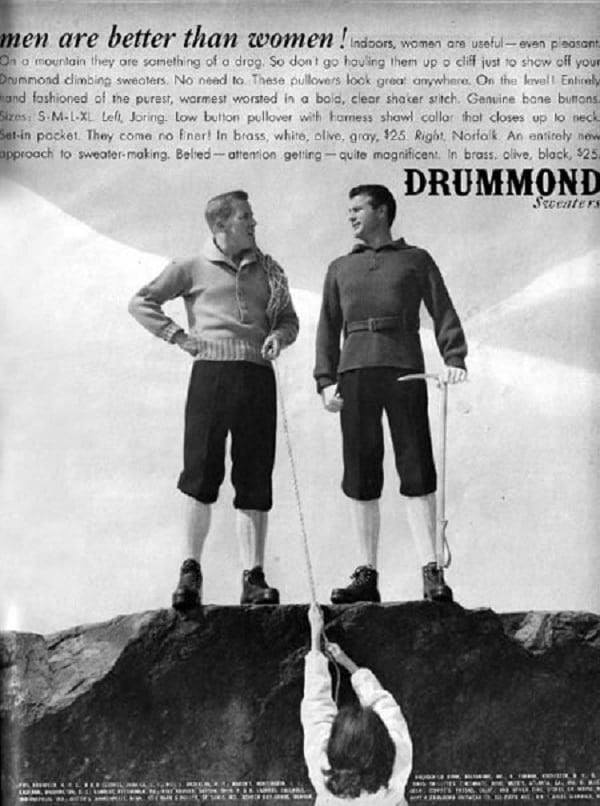 ... or so Drummond Sweaters would have us believe.

P.S. Don't miss the woman at the bottom of the frame for bonus sexist points.Flickr/lobstar28

Blow In Her Face And She'll Follow You Anywhere 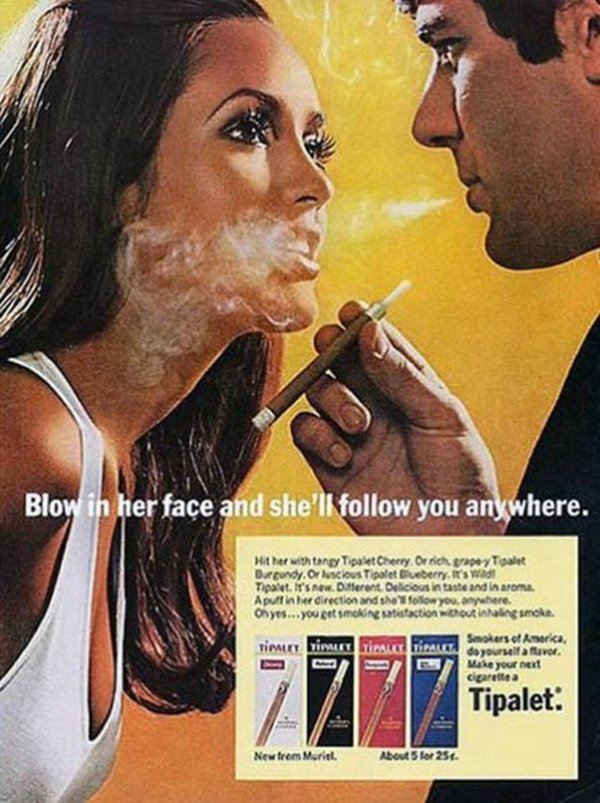 Are you losing your man?

That's the question posed in this 1950s ad. And unless you buy their product you very well might be losing yours.Instagram/jessica.maree.x 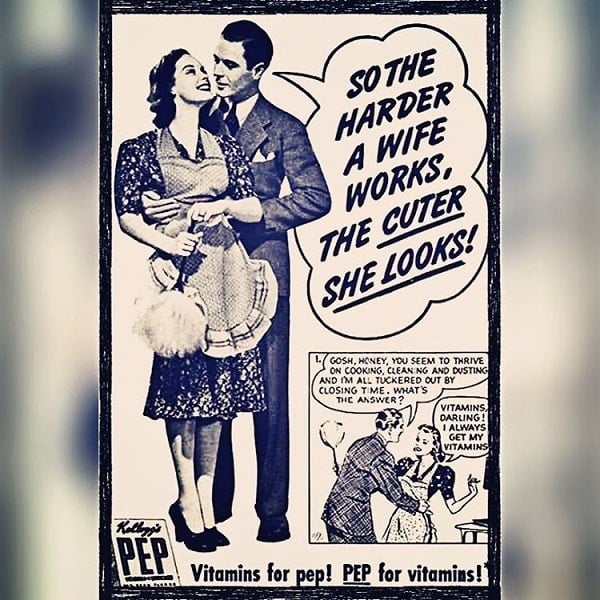 In this ad, we can see that women do all the work in the house. Of course, they don't do so to keep the house clean, just to look cute for their husbands!Instagram/lablankafoto

American Apparel has been in and out of the news over the last decade for a variety of scandals, including lawsuits against the CEO for sexual harassment, accusations of using underage models, and having ads regularly banned by advertising authorities.

This ad, however, did see the light of day.

Apparently, the creators of this ad never got the memo that domestic abuse is not something to make light of privately, let alone in mass publication.Instagram/teenalertprogram

The Chef does everything but cook -- that's what wives are for! 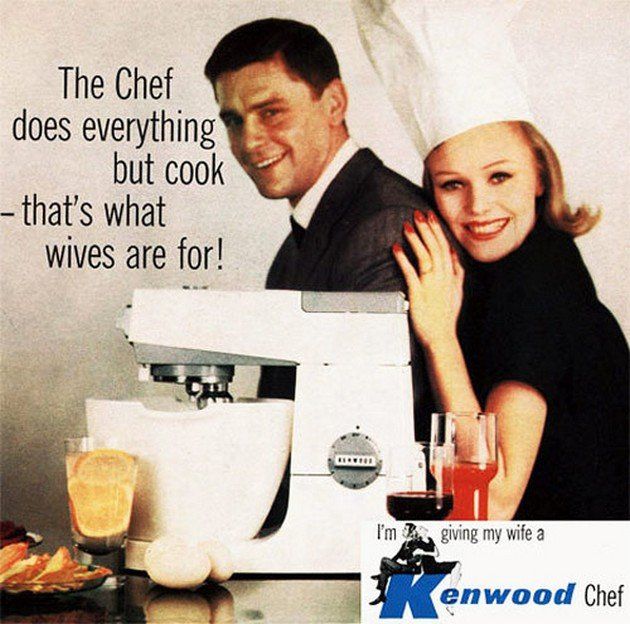 This beer ad may very well be the very first example of mansplaining.Instagram/jessica.maree.x

It's not only consumer goods companies that use abject sexism to sell stuff. Here, a construction company compares construction equipment's durability to that of a woman's body.Instagram/virginiarose7

Is it always illegal to kill a woman? 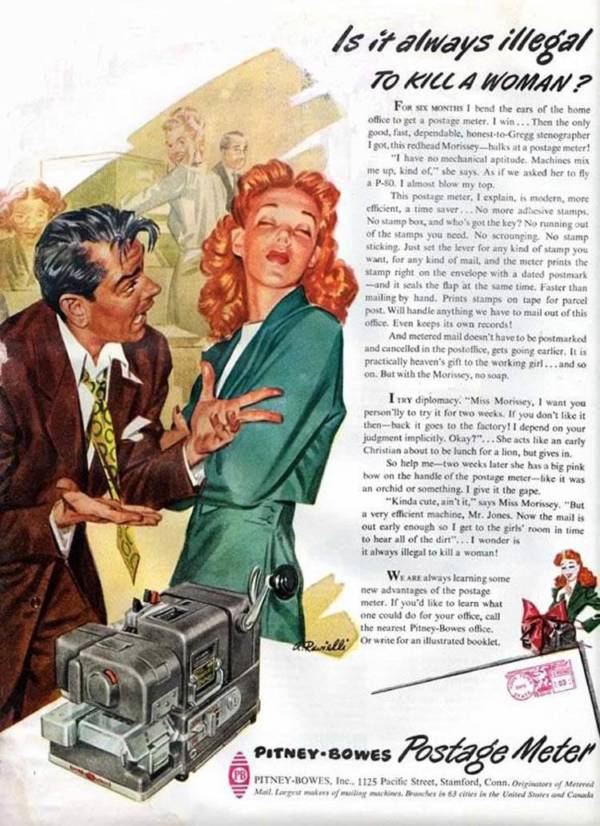 Women are not pears, according to ad 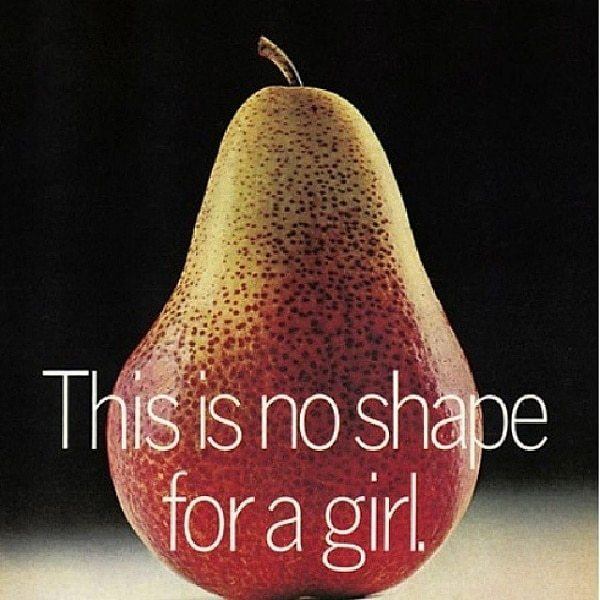 This ad originally ran back in the day but sadly had a bit of a resurgence recently when an Egyptian gym company ran virtually the same ad earlier in 2016.Instagram/ jessica.maree.x 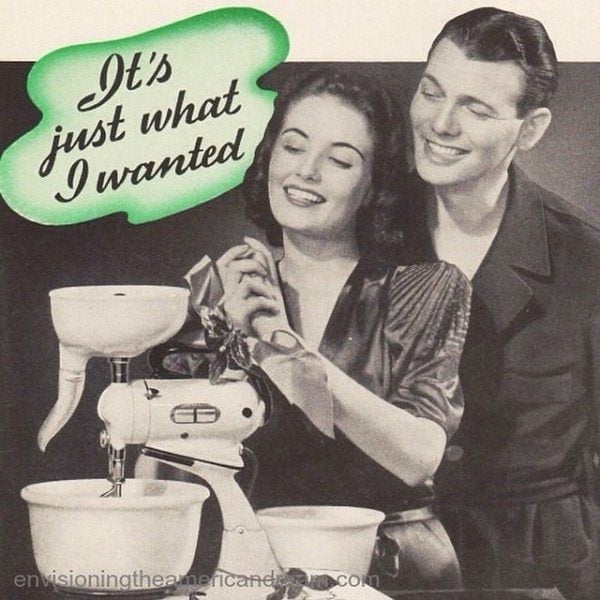 According to Kenwood, all women everywhere love appliances — and nothing but appliances. Instagram/sallyedelstein

Who knew skin cream was so important?

Believe it or not, this ad linking smallpox with the inability to find a man is actually only selling hand cream. Apparently, if you're a woman and have hands that actually do stuff, no man is going to go for you.Flickr/genibee

Soap will make sure your husband comes home at night

It's unclear whether this ad is selling rugs or slaves. Instagram/the_real_f_word_feminism

Finally, someone hits back! Sure, the billboard went up in the first place, but still. Progress!Pinterest

Another winner from American Apparel 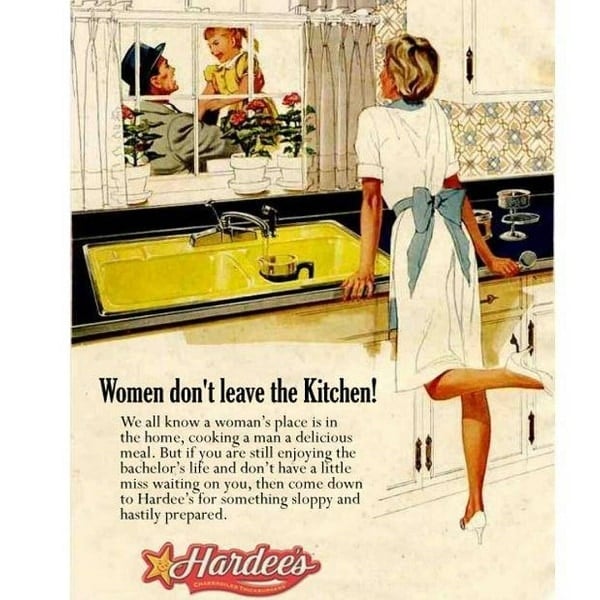 This early 1940s ad has probably the least appealing copy of all items appearing here. Who wants to eat "sloppy and hastily prepared" food?Instagram/sexistads

Simple enough for a woman 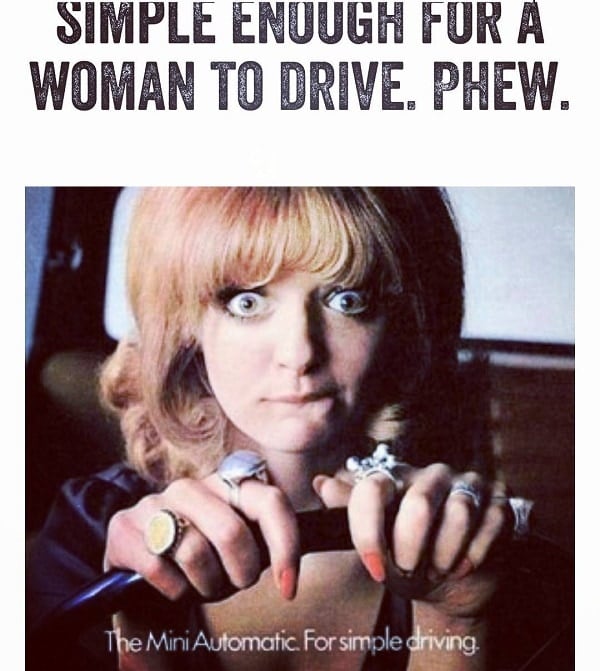 There's a recurring theme in all these ads: machines are complicated, and women are too dumb to operate them.Instagram/sexistads

The secret to finding a man

Apparently, "even Plain Janes" can find a man so long as they have a pin.Flickr/Amber Karnes

Women being helpless once more 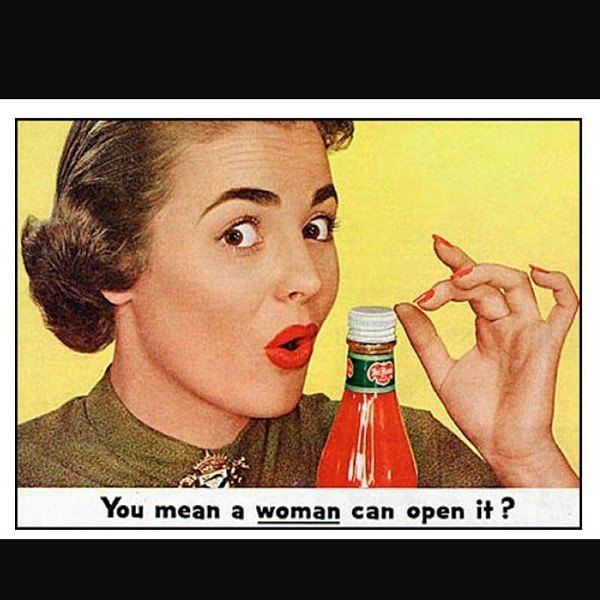 In the battle of woman vs. bottle, the loser is...the sexist creator(s) of this ad.Instagram/sexistads 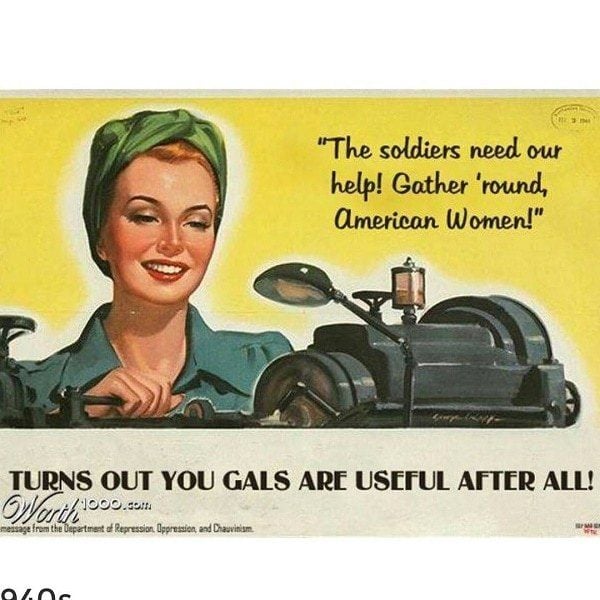 WWII saw women entering male-dominated workplaces such as factories at an unprecedented rate. You might assume that this balanced the scales in the ad world a bit, but you'd be giving advertisers too much credit. As this ad makes clear, advertisers instead sought to sell to women at work and continue to be offensive.Instagram/sexistads

For more, check out our other posts on vintage ads that are totally offensive and vintage Christmas ads.