Whether treating women as sex objects or servants, these sexist beer ads of decades past look positively shocking today. 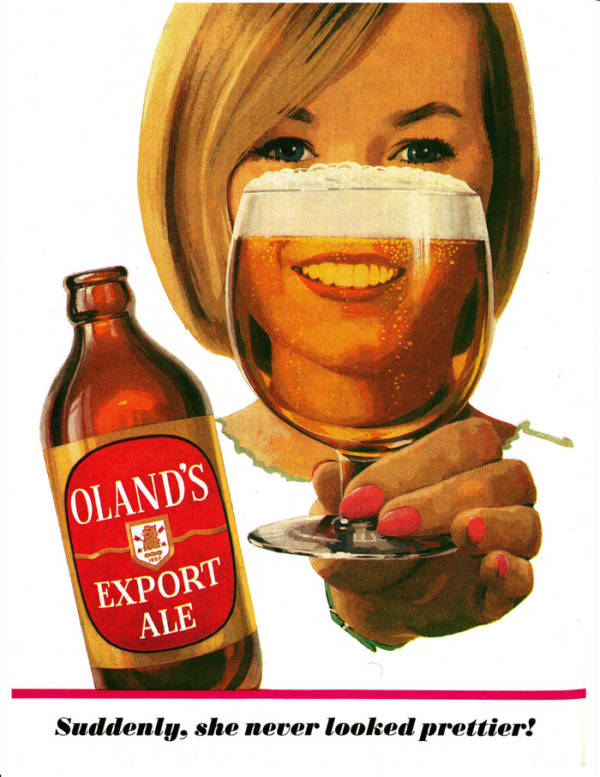 An ad for Nova Scotia's Oland's Export that appeared in The Atlantic Advocate in 1966.Newfoundland Beer 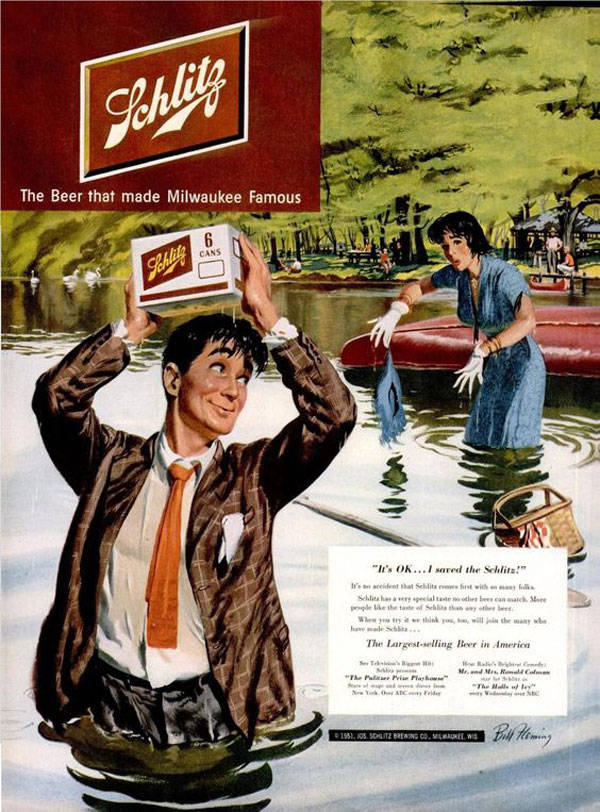 "It's okay, I saved the Schlitz!" Several Schlitz beer ads from the 1950s elevated beer to prime position in the homestead.Vintage Ads and Stuff 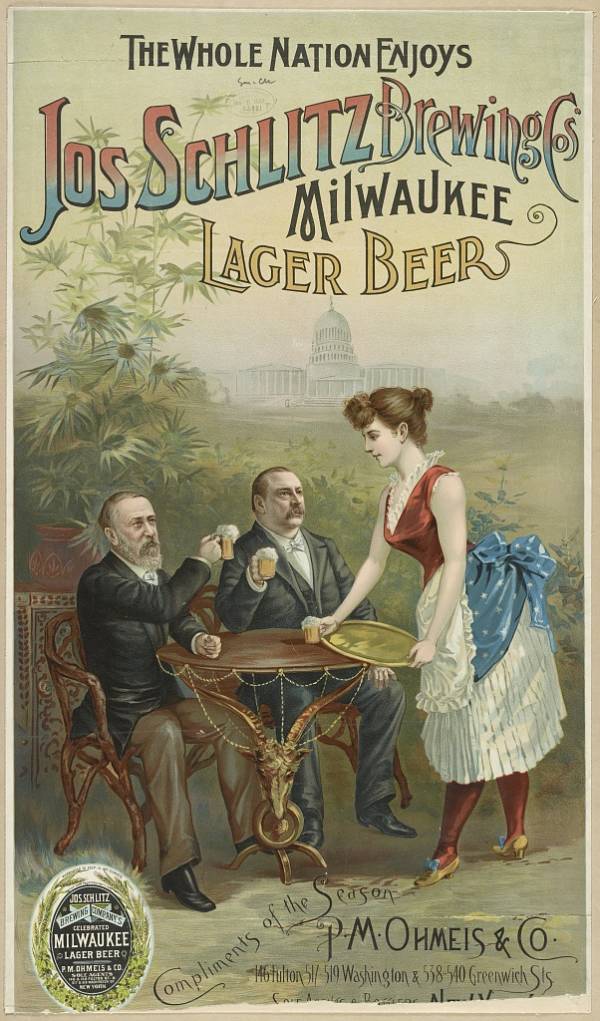 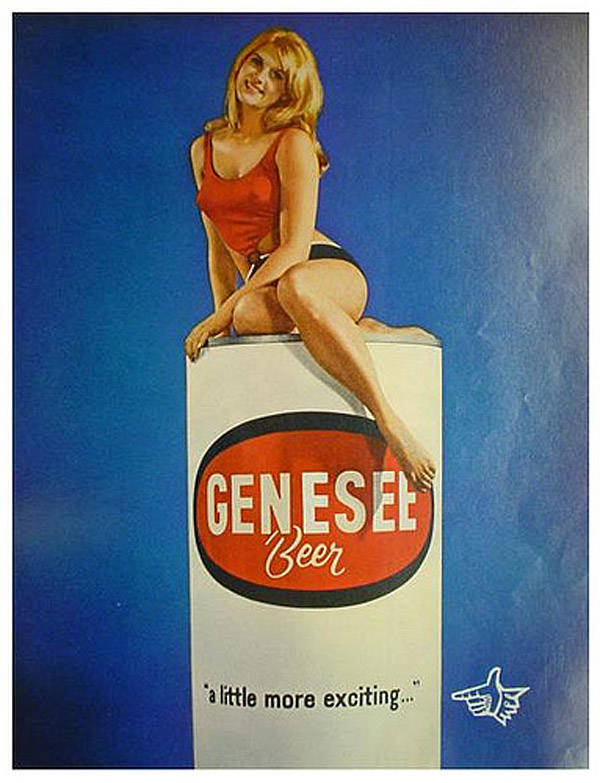 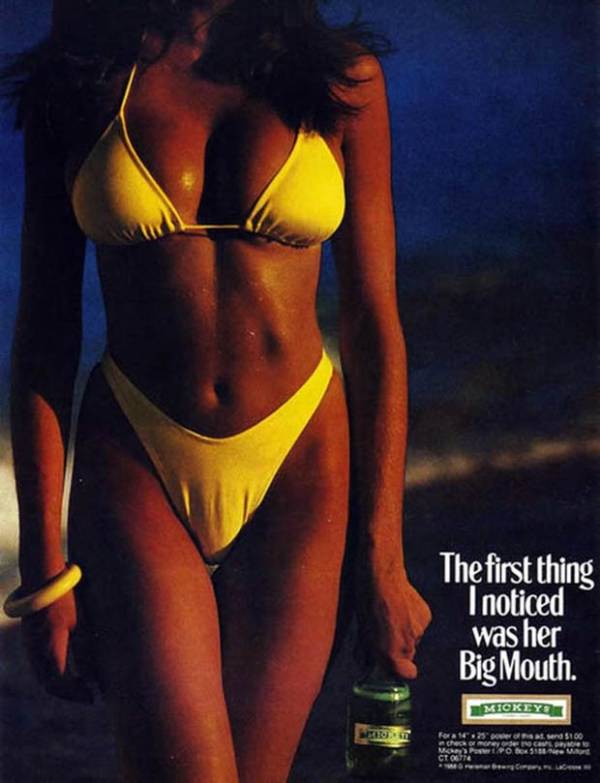 One of the distinguishing features of Mickey's Fine Malt Liquor is that it is sold in a special 12-ounce bottle known as a "Big Mouth." The company used those bottles to create one of the beer industry's most offensive ads.Buzzfeed 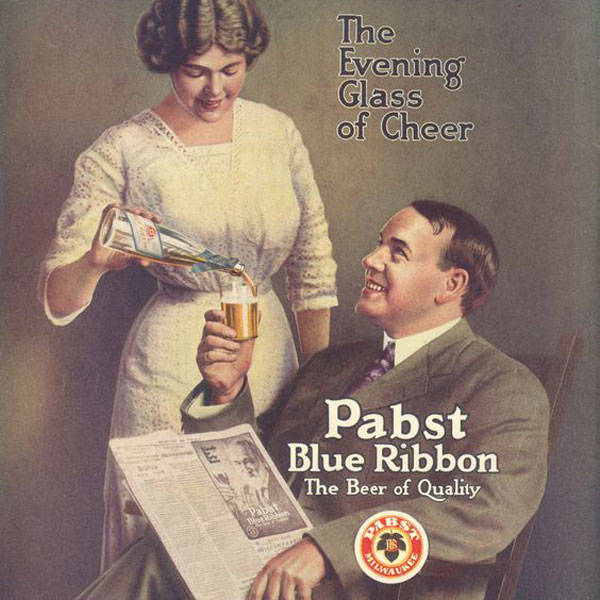 Why pour your own beer when you have a woman to do it for you, suggests this 1913 poster for Pabst Blue Ribbon lager.Pabst 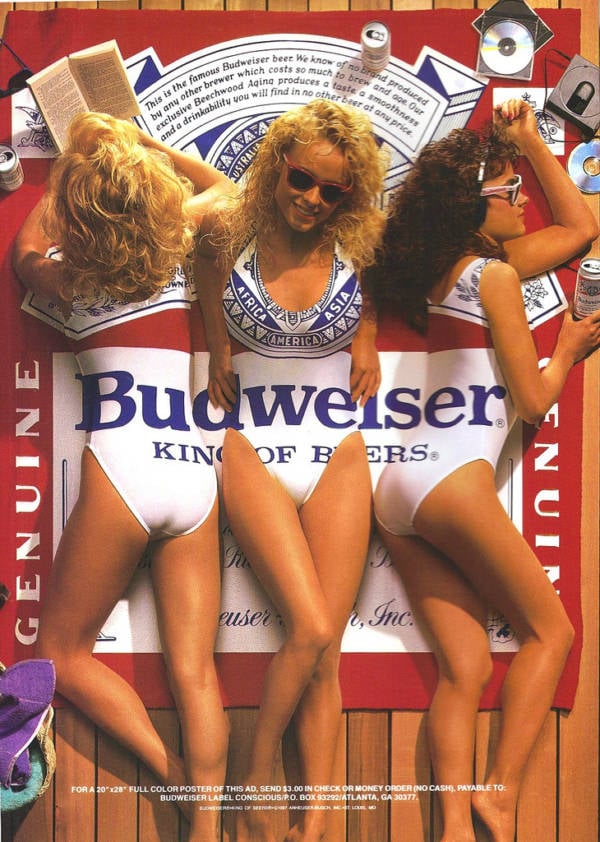 Another example of female objectification from Budweiser.The Chive 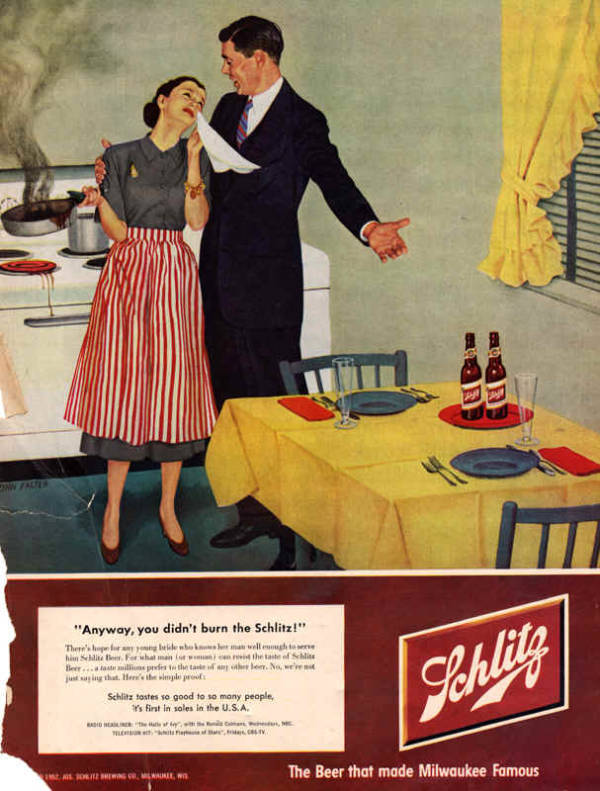 "Anyway, you didn't burnt the Shlitz!" This 1952 poster for Schlitz beer doesn't hold back with the gender stereotyping.Brookston Beer Bulletin 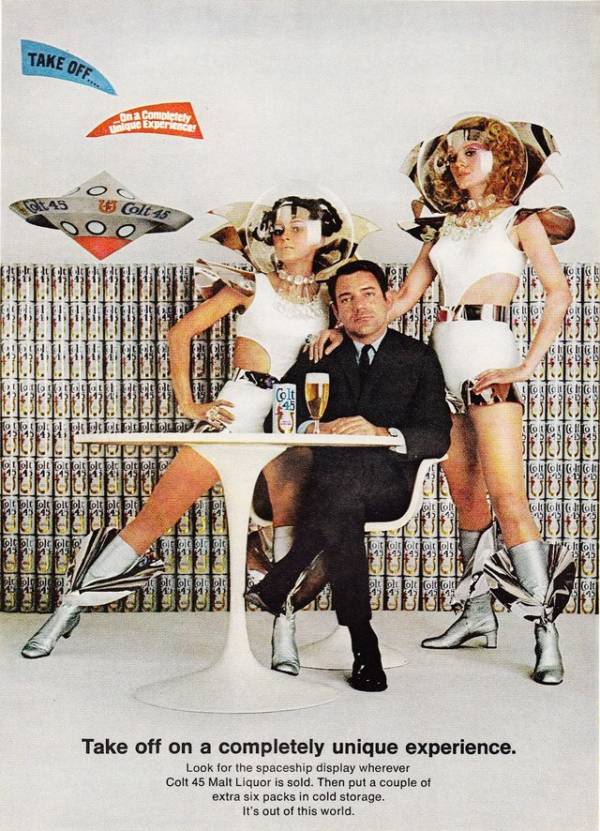 This space-age ad for Colt 45 ran in the pages of Playboy.Thrillist 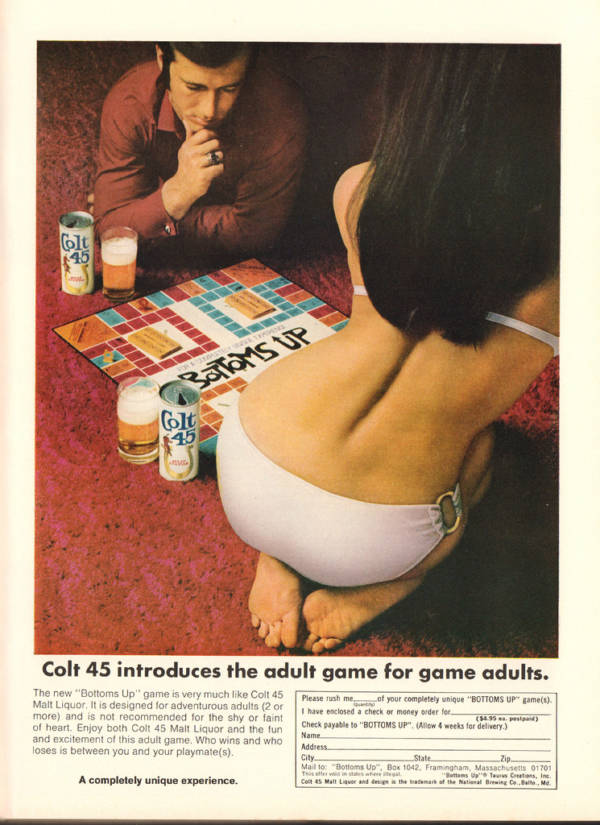 Created in 1970, Colt 45’s "Bottoms Up" drinking game involved drinking lots of beer and following instructions on “action cards,” like: “Obey any wish or request of the player on your right” or “Explain to other players why you think that sex before marriage is a necessity.” (It's unclear if woman were required to wear bikinis while playing.)Adweek 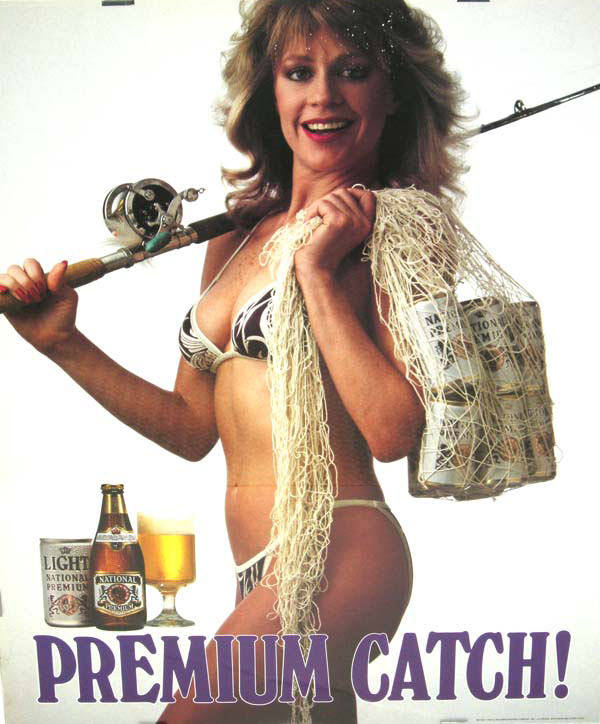 Objectifying the female form to cater to a male audience is not a new advertising tactic. Just take a look at this 1980s ad for National Premium beer.National Premium Beer

A wife rewarded with affection for performing her domestic duties.Brookston Beer Bulletin 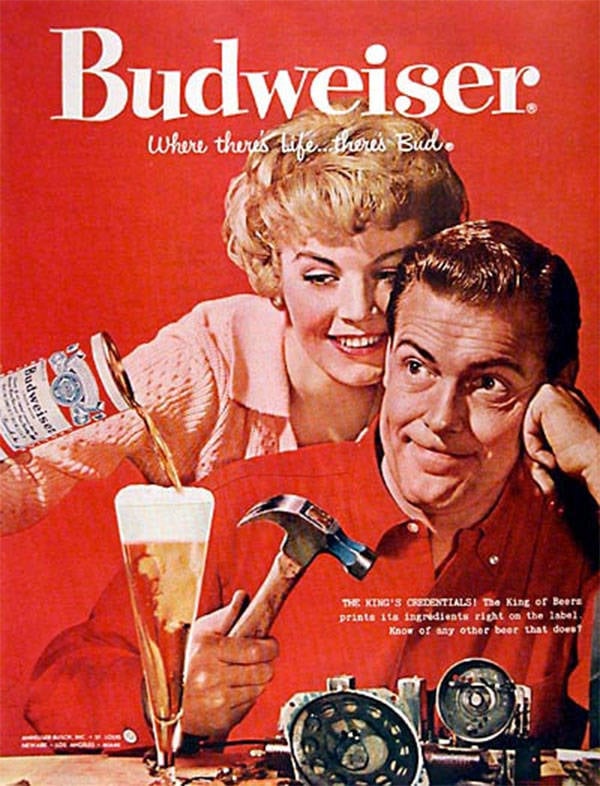 Budweiser has been around since 1876 and remains one of the top-selling beers in the U.S. Their marketing, however, leaves much to be desired when it comes to gender equality.Neat Designs

In an attempt to cater to female beer-drinkers, Acme tapped into gender-based body-shape stereotypes in this 1930s ad. Classy.Acme Beer 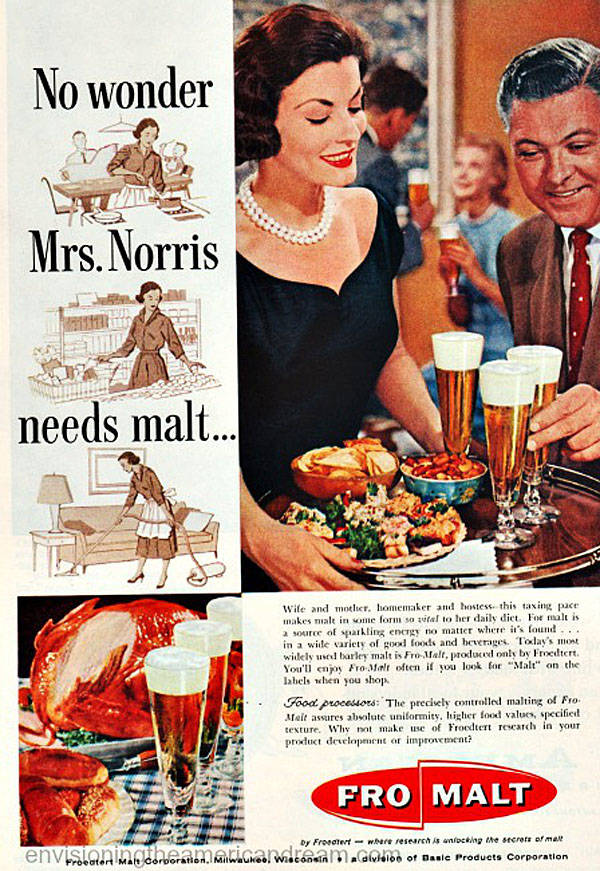 Even when beer advertisers did target their products to women, the approach remained questionable: “Wife and mother, homemaker and hostess - this taxing pace makes malt in some form so vital to her daily diet. For malt is a source of sparkling energy no matter where its found.”PopSugar 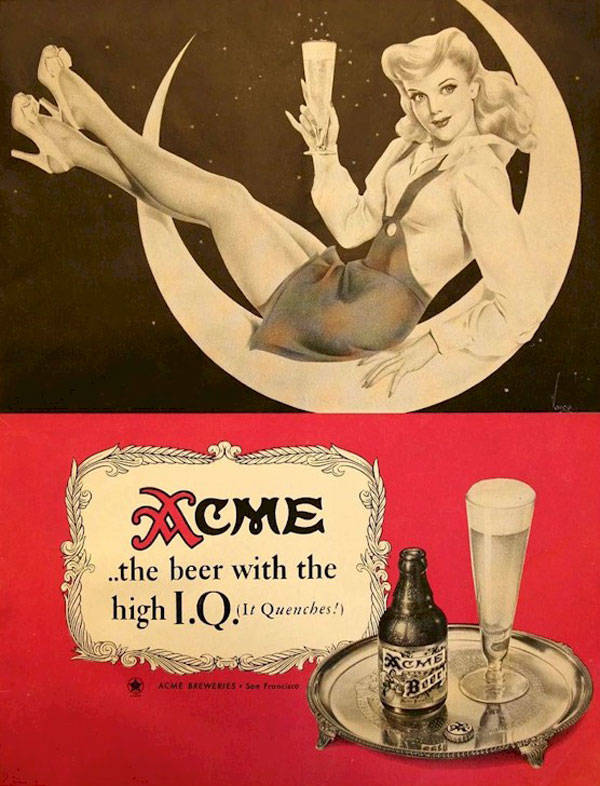 Sex sells, as the saying goes, and even advertisers in the 1940s thought so, apparently.Neat Designs 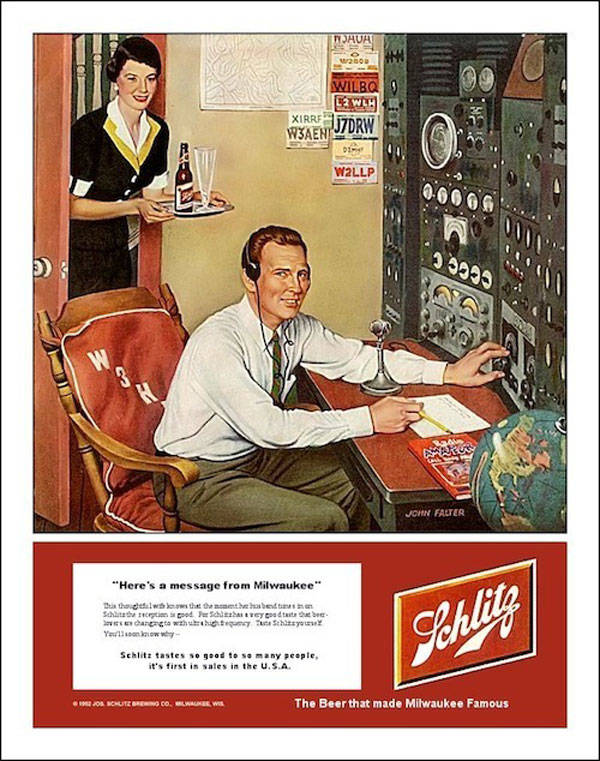 Drinking on air is okay if you're raving about the beer you're gulping (and your tipple was brought to you by your obedient wife). Many Shlitz beer ads, like this one from the 1950s, feature women assuming the role of beer-server.Ham Gallery 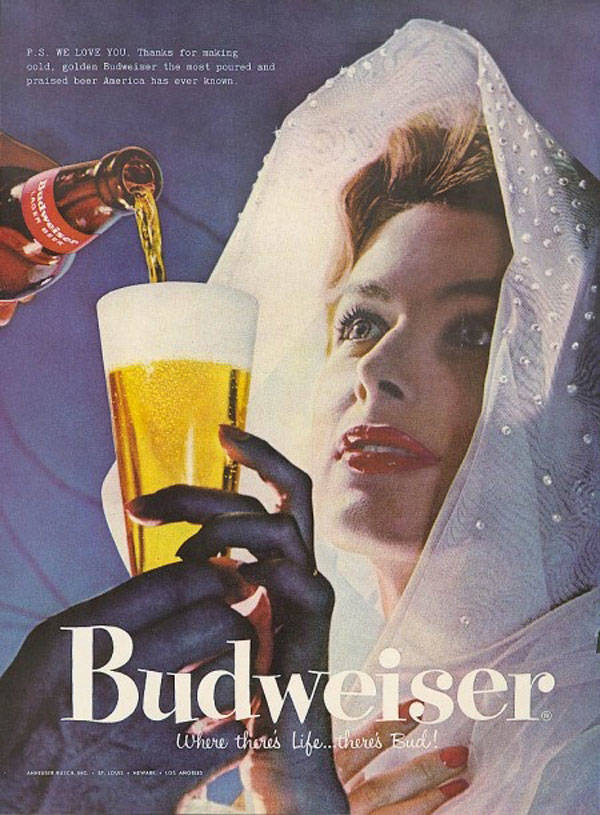 A woman, draped in virginal white, gazes up at her male beer provider in this 1957 ad from Budweiser.Vintage Ad Browser 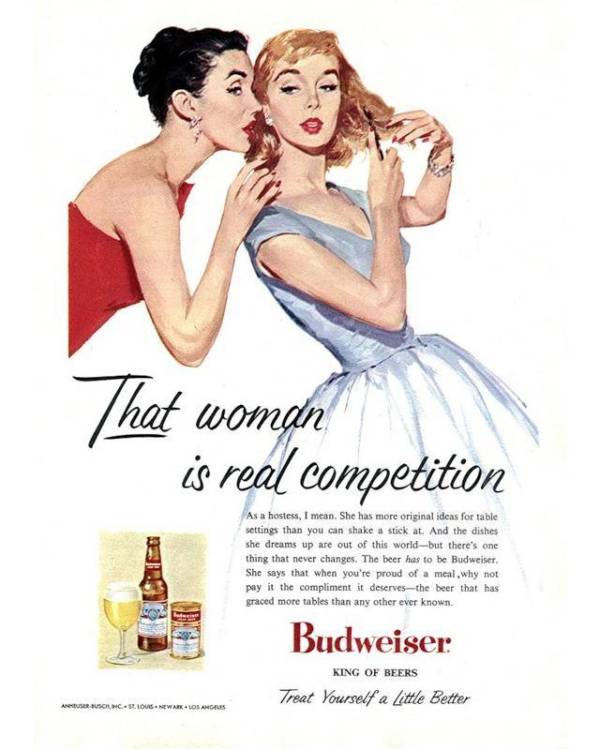 In many early beer ads, women are judged by their ability to perform domestic duties like cooking or hosting dinner parties.PopSugar 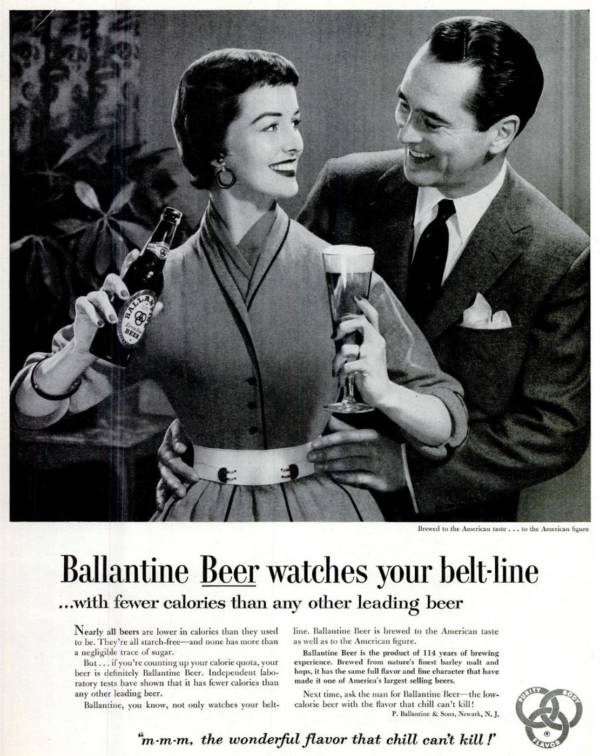 Many beer producers tried to market their wares as a low-fat drink for women.Vintage Ad Browser

"She found she married two men," Budweiser claimed in this 1956 ad. "In fact, all women do…there’s always that inner man, you know. And think of all the planning that goes into meals to make him contented! When you plan, are you fair to yourself? Do you complement your delicious dishes by serving the best beer ever brewed? P.S. It’s a fact: Budweiser has delighted more husbands than any brew ever known."Business Insider 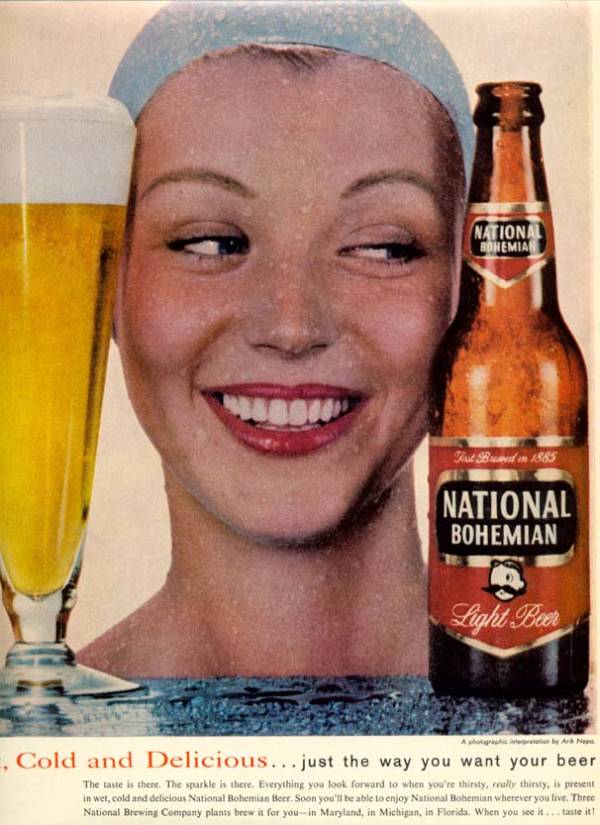 "Wet, cold and delicious ... just the way you want your beer" — the innuendo here is not particularly subtle. Brookston Beer Bulletin 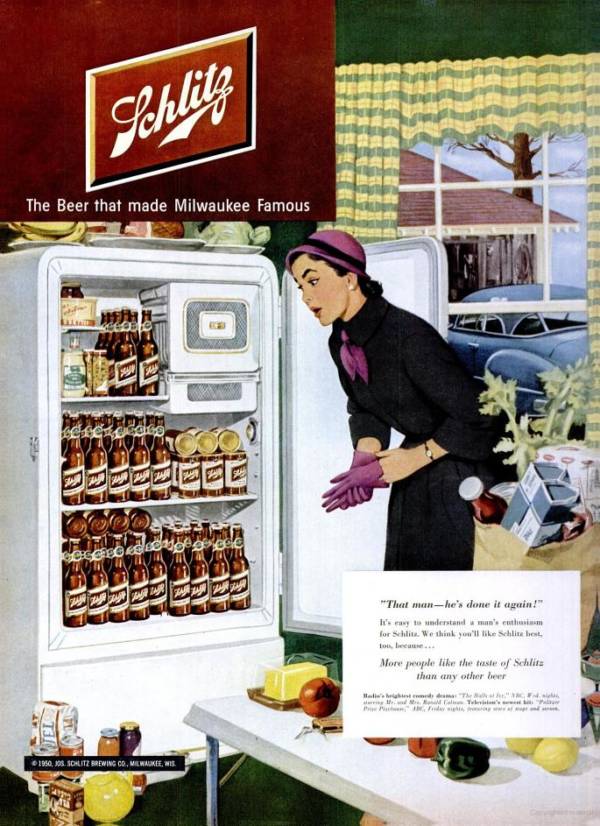 "That man, he's done it again!"PopSugar 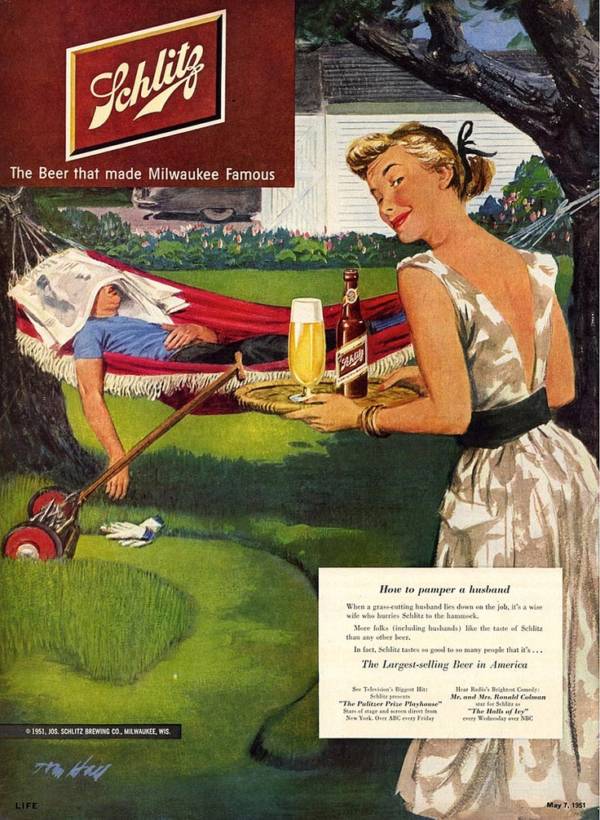 The sexual stereotypes are strong in this "How to pamper a husband" ad from Shlitz.Brookston Beer Bulletin 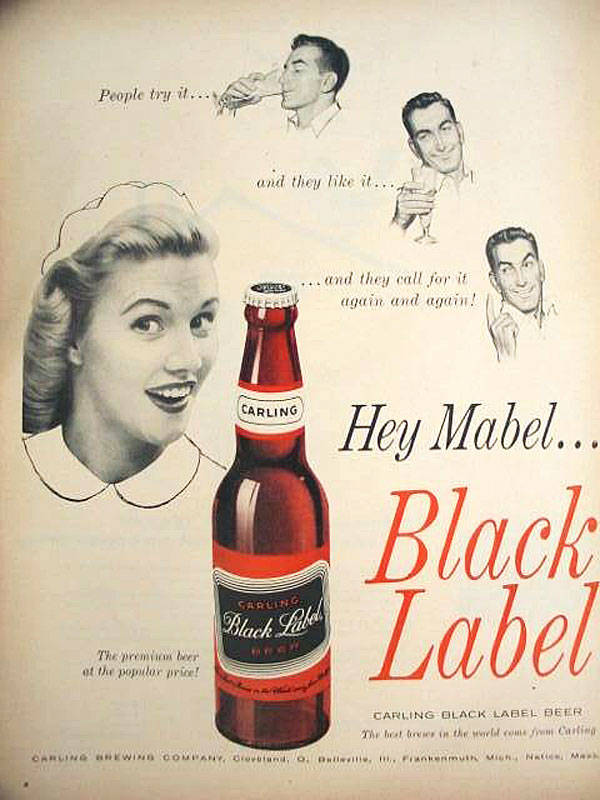 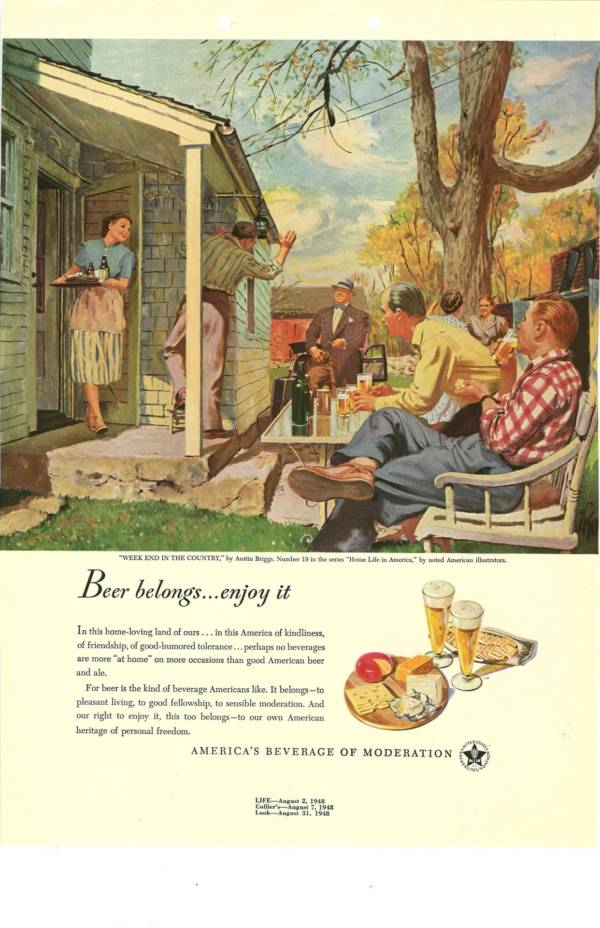 This ad — which wraps American liberty, beer-drinking, and wholesome family living into one neat poster — appeared in LIFE Magazine in 1948.Magazine-advertisements.com

The beer industry has a long and vexed history of dude-centric advertising. If women even featured in early beer ads, they were typically depicted serving up a cold brew to their hard-working husbands or were simply reduced to objects of the male gaze.

Since then, after a whopping century or so, the frat-house imagery and misogynist subjugation of beer ads seem to finally be losing favor as ad targeting shifts towards a generation of millennial beer-drinkers less likely to tolerate such attitudes.

While we can take solace in the fact that the landscape does show signs of shifting, plenty of modern beer ads still fall woefully short when it comes to attitudes about women.

In response, Brazilian beer brand Skol recently owned up to its flagrant use of the female form to market their product and decided to do something about it. They hired six female illustrators to redesign their most overtly sexist ads to promote a more respectful message. The campaign provides a glimmer of hope for an industry in desperate need of transformation.

Above, see 26 appallingly sexist beer ads of decades past.

Next, have a look at the most sexist ads as well as the most racist ads of decades past.