Jessica Krug taught both African and Latin American studies, all while claiming to be Black and Caribbean herself. 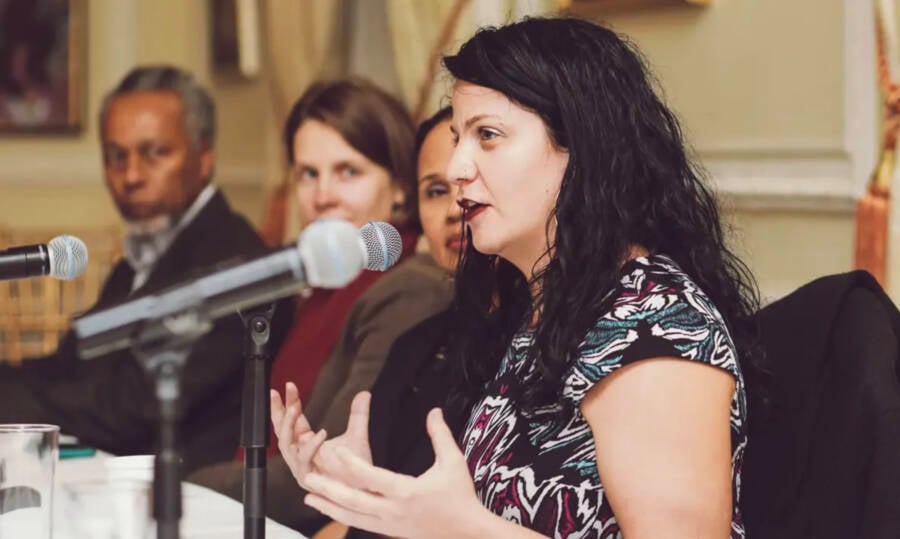 A George Washington University (GW) professor who portrayed herself as a Black woman for her entire professional career has just revealed that she’s been lying. According to CNN, Jessica A. Krug not only taught African and Latin American studies, but wrote extensively about these identities as if they were hers for years.

“To an escalating degree over my adult life, I have eschewed my lived experience as a white Jewish child in suburban Kansas City under various assumed identities within a Blackness that I had no right to claim,” Krug wrote in an admission posted to Medium.

Naturally, students and faculty members alike have been stunned by the reveal. George Washington University spokesperson Crystal Nosal confirmed the situation is being looked into. Meanwhile, students have been forced to reconcile their teacher’s true identity with the lies they have been told.

A GW junior studying international affairs named Anmol Goraya met Krug in spring 2019. The introductory history class quickly became one of her most cherished classes and Krug one of her favorite professors. To Goraya, Krug seemed like an unapologetic woman of color who confidently spoke her mind.

“From the moment she came into the classroom, I was in awe of her. And I’m just shocked that it was such a complete lie,” said Goraya.

Krug routinely taught in leopard print clothing, high heels, and huge hoop earrings. She told the class that she was from the Bronx and proud of it — and even got into a dispute with a student who claimed rap was invented in Brooklyn instead of her supposed home.

Goraya remembers her teacher championing Black and Indigenous artists throughout the semester, lecturing on subjects like the Indigenous populations in Chile to the role of rice in the African diaspora. She would also switch to Spanish for effect while teaching, saying “plátanos” rather than “plantains.”

Krug even said the N-word in class. While this occurred only while reading from course-related texts, Krug’s now-public history of pretending she was Black certainly complicates the matter. From telling one student she was Puerto Rican to telling another she was Dominican, Krug unabashedly fabricated her identity. 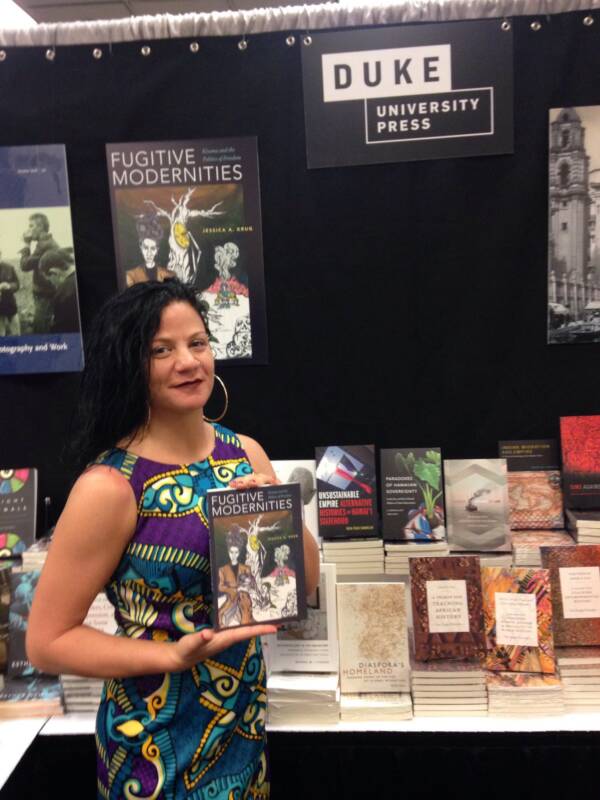 TwitterKrug with her book Fugitive Modernities.

Krug acknowledged the fact that she had no right to claim these identities and wrote that “doing so is the very epitome of violence, of thievery and appropriation, of the myriad ways in which non-Black people continue to use and abuse Black identities and cultures.”

“I am not a culture vulture,” she added. “I am a culture leech.”

Krug also wrote extensively on her fake identity. After receiving her PhD from the University of Wisconsin-Madison in 2012, she began contributing countless articles to Essence — the “Black Women’s Lifestyle Guide.”

Published on August 27, her most recent article, “On Puerto Rico, Blackness, And Being When Nations Aren’t Enough,” has since been deleted. In 2018, Krug published the book Fugitive Modernities, which traces the histories of communities in Angola. Krug also continually makes references to those who came before her in the book and included mentions of her grandparents and ancestors in clear allusions to her imaginary African heritage. 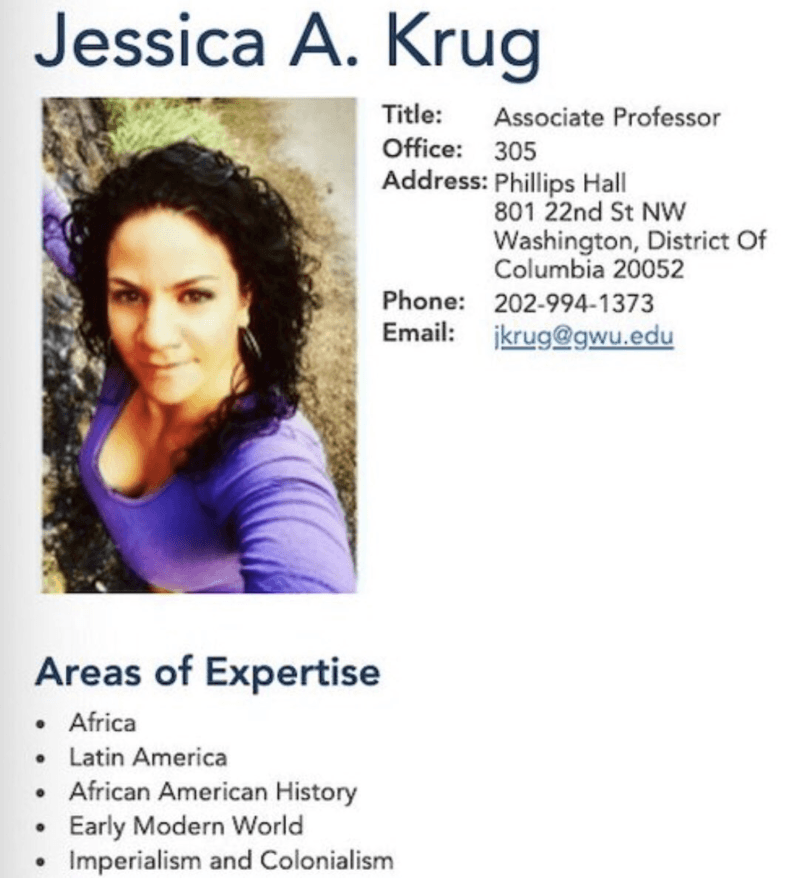 “My grandparents, who gave me the best part of themselves, music and movement and storytelling, the inclination to ask and the soul to listen,” Krug wrote in Fugitive Modernities. “My ancestors, unknown, unnamed, who bled life into a future they had no reason to believe could or should exist.”

In reality, Krug is a white Jewish woman from the suburban middle-class of Kansas City. But she went by the name Jessica La Bombalera while frequenting activist circles and spoke at a New York City hearing on police brutality where she berated white attendees.

“I’m Jessica Bombalera,” she once declared. “I’m here in El Barrio, East Harlem — you probably have heard about it because you sold my fucking neighborhood to developers and gentrifiers… I wanna call out all these white New Yorkers who waited four hours with us to be able to speak and then did not yield their time for Black and Brown indigenous New Yorkers.” 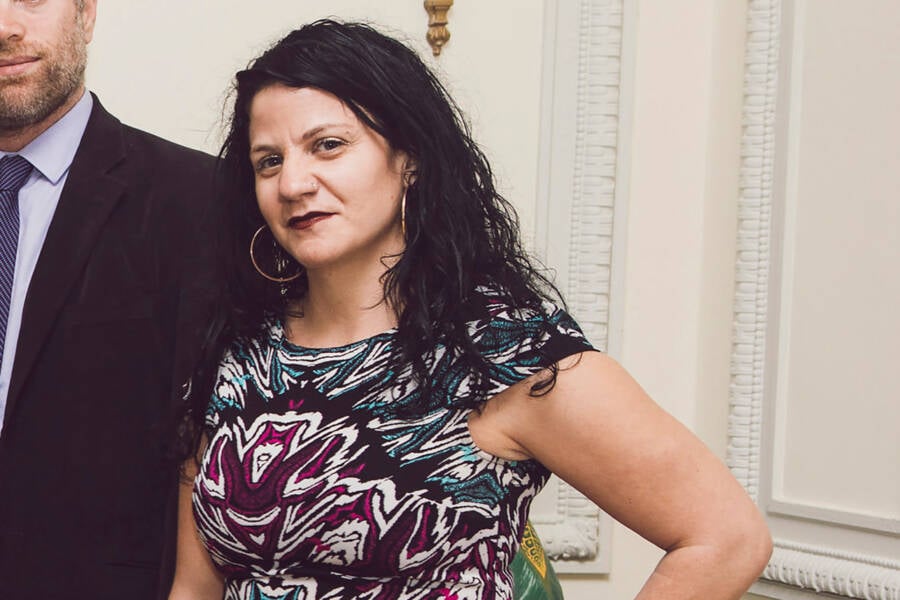 Embassy of HaitiKrug acknowledged that she may have some mental health issues.

Krug admitted also that she may have some mental health issues. She alluded to a traumatic childhood, though remained adamant that this was no excuse for her behavior.

“To say that I clearly have been battling some unaddressed mental health demons for my entire life, as both an adult and child, is obvious,” she wrote. “Mental health issues likely explain why I assumed a false identity initially, as a youth, and why I continued and developed it for so long.”

GW has not yet publicly stated what they will do next regarding the situation, though it’s unlikely that Krug will continue to teach African and Latin American studies there.

Ultimately, the most disheartening consequence of Krug’s actions are the other teaching candidates who were passed over in favor of her when she was hired. There is also the matter of the students whose trust she broke.

“I’m dazed and still processing my emotions,” wrote Robert Jones, Jr., “but mostly, I feel betrayed, foolish and, in many ways, gaslit.”

“It was the last thing on my mind to think she was lying,” said Goraya. “I would never think I had the details confused.”

After learning about the white professor who has pretended to be Black for her entire professional career, read about the “transracial” woman who claims to be Filipino. Then, learn about the Russian professor who admitted to murdering his student-turned-lover.