Meet Jimmy Burke — The Gent Behind Goodfellas And The Lufthansa Heist

Jimmy Burke had a reputation for being a gentleman, but that didn't stop him from being one of the most dangerous masterminds the mafia had ever seen. 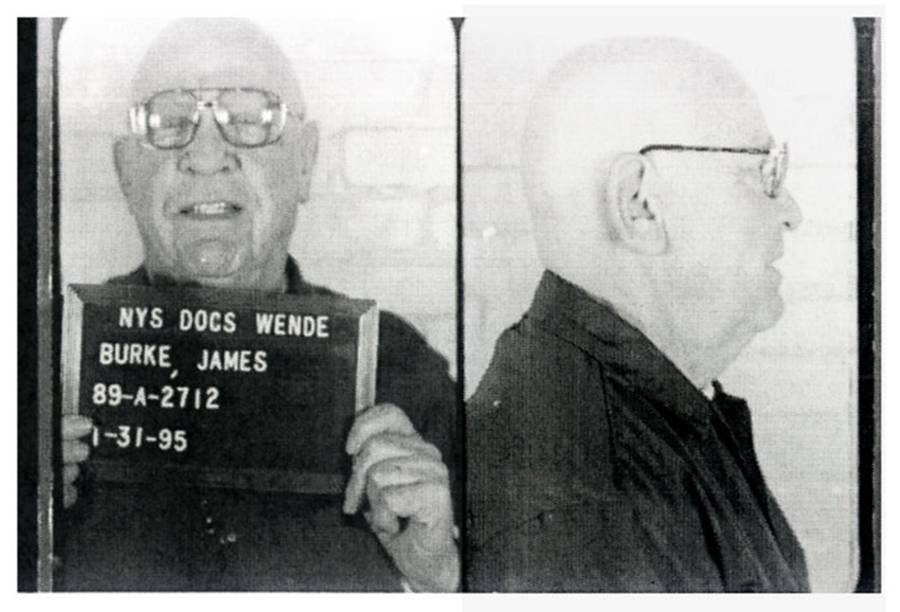 Irish gangster Jimmy Burke had a knack for getting away with things.

As an Irishman, Burke was never formally inducted into a crime family. He wasn’t Italian, so he couldn’t be a made man, but that proved to work in his favor. Despite not being a part of a family, he maintained close friendships with the higher-ups in the Lucchese family and used the connections to his advantage.

At the same time, as an outsider, he could float around as a free agent, orchestrating crimes, heists and hits and getting away with almost anything.

Fitting, then, that Jimmy Burke’s biggest contribution to the mafia was another crime he never answered for: his orchestration of the Lufthansa heist.

In 1978, a group of unknown individuals pulled off the largest robbery committed on American soil, resulting in one of the longest-investigated crimes that the United States has ever seen. 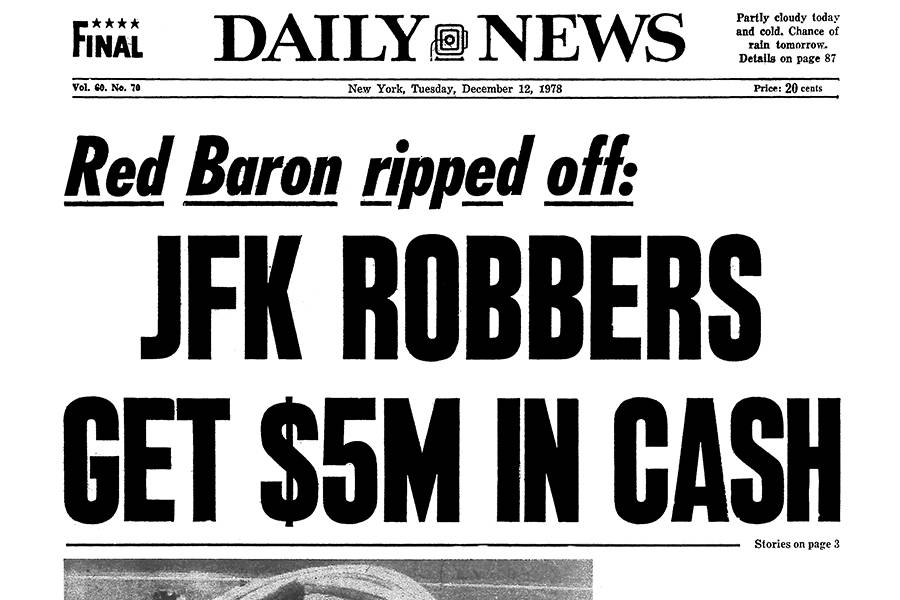 Jimmy Burke first began formulating the plan several months before putting it into action. Over dinner with a bookkeeper, his associate Henry Hill learned of a shocking arrangement that was taking place at New York’s JFK airport.

Once a month, millions of dollars in untraceable American currency would be flown into the airport, the result of monetary exchanges made for servicemen and tourists in West Germany. Once it arrived, via Lufthansa airplanes, it would be stored in a vault at JFK. A few years prior, several airport employees had stolen $22,000 in foreign currency from Lufthansa. In exchange for payment, they agreed to help orchestrate the crime.

Burke handpicked six men from the Lucchese family, his own son, and one member of the Gambino family to do the job. They performed the entire thing in 64 minutes and ended up bringing Burke nearly $6 million (just over $22 million by today’s standards).

While dozens were arrested, several were tried, and a few were cleared, the mastermind behind the crime was never even charged.

A Criminal Enterprise From Queens 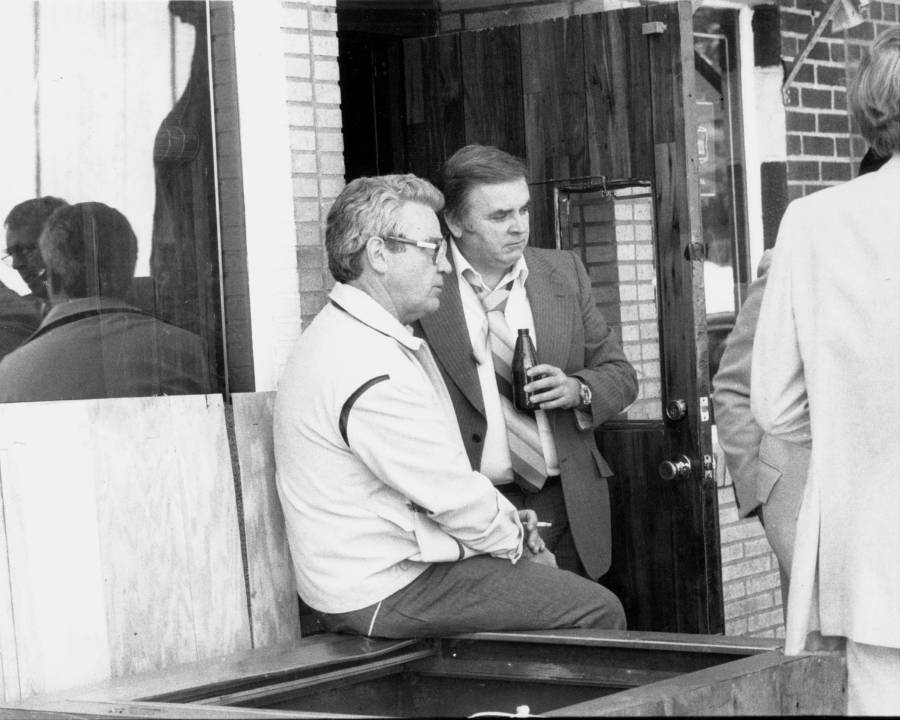 Nick Sorrentino/NY Daily News Archive via Getty ImagesJimmy Burke outside his tavern during an FBI search for bodies.

He owned a dress factory called Moo Moo Vedda’s that he used to launder money, and a tavern called Roberta’s Lounge, which served as a sort of hub for him and his crew.

Day to day, Burke and his crew made their living by reselling stolen merchandise, and untaxed liquor and cigarettes. Burke’s favorite move was to hijack delivery trucks on their way through Ozone Park. He would have his boys stop the trucks and take the drivers’ licenses, then he would hand each of the drivers a fifty and tell them to forget about it.

This strange sort of tipping earned him the nickname “Jimmy the Gent” among his crew and later the crime families.

Burke also knew his way around law enforcement and had several corrupt cops working for him over the years. He would bribe them to name their informants, who would then mysteriously go missing. Even when it came to close personal friends, like Remo Cersani, he personally ordered and saw to their executions.

When he heard Remo was going to set him up, he took him for a ride in his car, had an associate named Tommy DeSimone murder him, and buried him next to his bocce ball court. According to Henry Hill, whenever Burke and DeSimone played bocce, they’d start the game with “Hi Remo, how ya doing?”

Despite his polite nickname and reputation as a gentleman, Burke was as tough as they came.

He’d often lock the young children of his victims inside refrigerators, strangle his enemies with piano wire, and retaliate violently against those who made him look bad. Hill claimed that Burke was directly responsible for at least 60-70 murders, though there easily could have been more he wasn’t aware of.

The Downfall Of Jimmy Burke 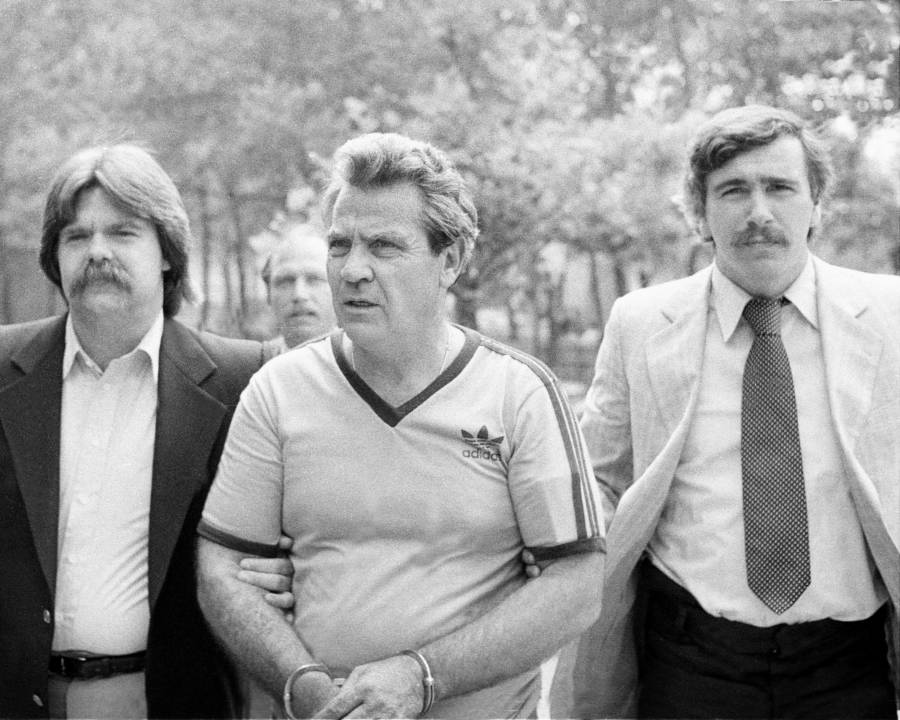 Around 1982, Hill had become an informant for the FBI and admitted that there were more than a dozen people buried in and around Roberta’s over the years. In addition to that, he snitched on Burke for rigging college basketball games.

Burke was sentenced to 20 years, though the DA tried to get more. During the trial, he set out to prove that Burke was involved in the Lufthansa heist and several murders, though his involvement was never proven.

While serving his sentence, he was diagnosed with lung cancer, and in 1998 he passed away. He would have been eligible for parole in 2011.

Though Jimmy The Gent is no longer with us, his influence lives on. His organization of the Lufthansa heist has been depicted in several books and films, including as Martin Scorsese’s Goodfellas.

Even today, his crimes are still being unveiled. As recently as 2013 he made his way back into the news, when an investigation unearthed human remains at Jimmy Burke’s home, proving that the untethered criminal mastermind may just live on forever.

Enjoy this look at Jimmy Burke? Next, read more about Henry Hill and the other men behind the movie Goodfellas. Then, check out John Gotti, another polite and dapper mobster.