The Secret History Of Mormon Underwear, The Sacred Temple Garments Worn By Members Of The LDS Church

Adult members of the Mormon Church are supposed to wear their holy temple clothes every day — but they're not supposed to let anyone see them or even talk about them.

All religions have symbols, relics, rites, and garments that are sacred to their followers. But one religious garment often gets more attention — for better and for worse — than others: the holy Mormon underwear of the Church of Latter-Day Saints.

But what is Mormon underwear? How does someone start wearing it, and how often do they put it on? Are there differences between the underwear of men and women?

Though the idea of Mormon underwear has elicited both curiosity and mockery, many Mormons say that it’s no big deal. They compare it to other religious items like the Jewish yarmulke or the Christian “What-Would-Jesus-Do” bracelet.

This is everything you need to know about Mormon temple clothes, including why you shouldn’t call it “Mormon magic underwear.”

What Is Mormon Underwear?

Mormon underwear, officially called a “temple garment” or a “garment of the holy priesthood,” is worn by adult church members after their “temple endowment,” a ritual that usually coincides with the beginning of missionary service or marriage.

After participating in this ceremony, adults are expected to wear the underwear at all times (with exceptions like during sports). Generally made of white material, Mormon temple clothes look something like a t-shirt and shorts but adorned with sacred Mormon symbols.

Also unlike a regular t-shirt, these undergarments can’t be found at The Gap. Mormons must buy them at church-owned stores or on the official LDS website. 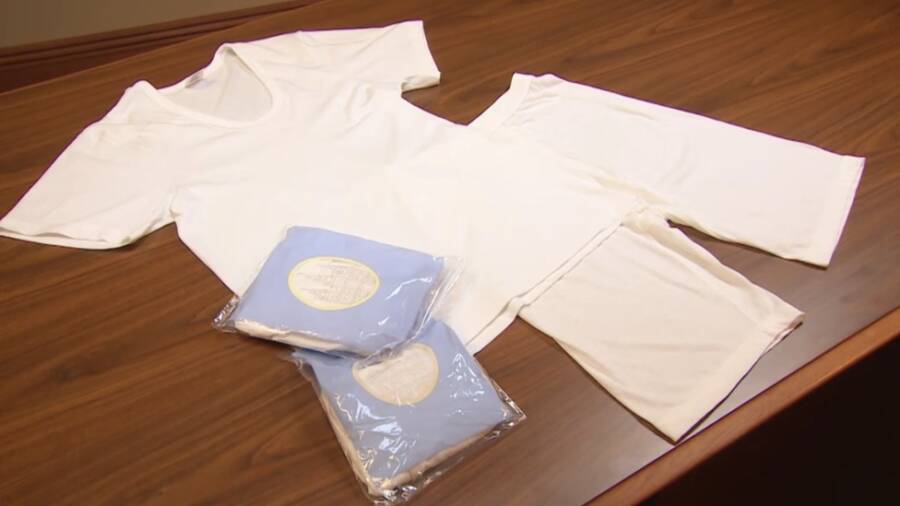 The Church of Jesus Christ of Latter-day SaintsAn example of a male temple garment.

“This garment, worn day and night, serves three important purposes,” explains the LDS church website. “It is a reminder of the sacred covenants made with the Lord in His holy house, a protective covering for the body, and a symbol of the modesty of dress and living that should characterize the lives of all the humble followers of Christ.”

The color white, the church explained, is a symbol of “purity.” And the underwear itself is largely the same for everyone — men, women, rich, poor — offering commonality and equality between believers. 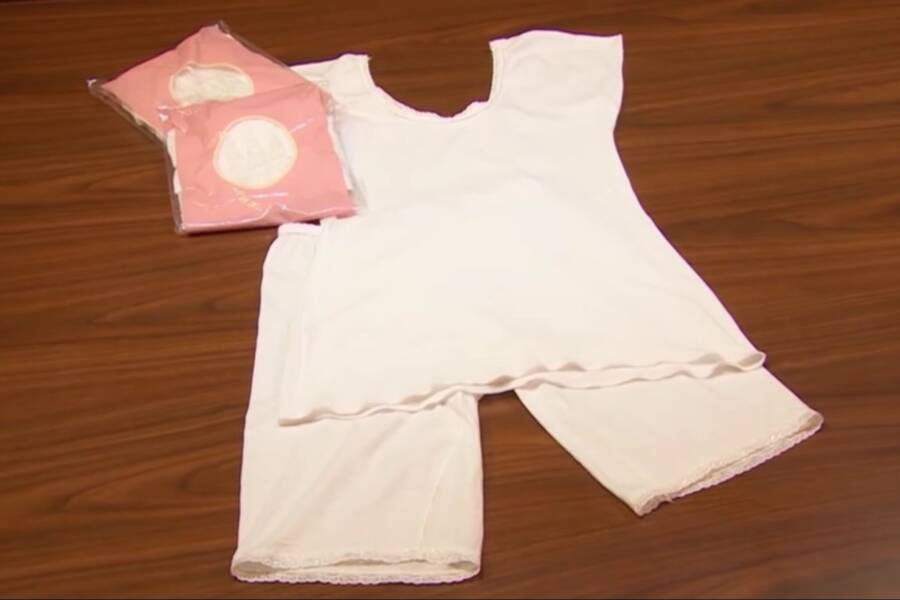 The Church of Jesus Christ of Latter-day SaintsAn example of a female temple garment.

Since members aren’t supposed to flaunt their underwear in public — they aren’t even supposed to hang them up outside to dry — the underwear also encourages conservative dress. Men and women must wear clothes that cover their shoulders and upper legs to conceal the garment beneath.

So, how did Mormon underwear become such a sacred tradition in the LDS community in the first place?

The History Of The Temple Garment

According to the Church of Latter-Day Saints, the tradition of Mormon temple clothes stretches back to the Biblical beginning. They point out that Genesis says, “Unto Adam also and to his wife did the Lord God make coats of skins, and clothed them.”

But the tradition of wearing temple garments is more recent. LDS church founder Joseph Smith instituted it in the 1840s, shortly after Mormonism began. Because the original design was “revealed from heaven,” it didn’t change for a long time. 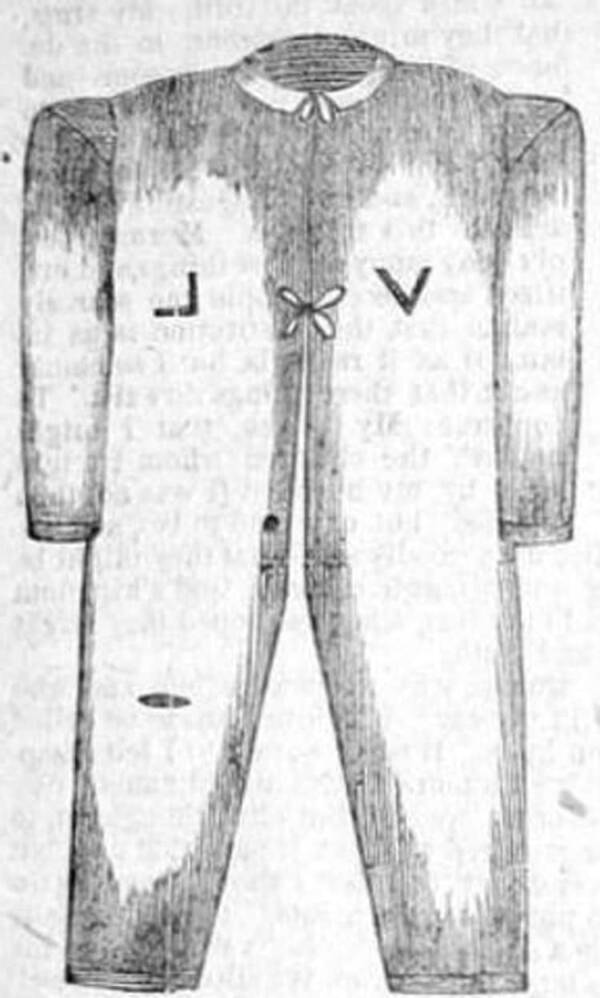 “The Lord has given unto us garments of the holy priesthood … And yet there are those of us who mutilate them, in order that we may follow the foolish, vain and (permit me to say) indecent practices of the world,” Joseph F. Smith, the founder’s nephew, thundered in response to pressure to modify the temple garments.

He added: “They should hold these things that God has given unto them sacred, unchanged and unaltered from the very pattern in which God gave them. Let us have the moral courage to stand against the opinions of fashion, and especially where fashion compels us to break a covenant and so commit a grievous sin.”

Yet Mormon underwear did change after Smith’s death in 1918. Starting in the 1920s, a number of adjustments were made to the traditional temple garments, including shortening the sleeves and pants.

Today, Mormon temple clothes are a pillar of faith for many people. But in our social media age, it’s also undergone new concerns, questions, and ridicule.

A Sacred Tradition In The 21st Century

Today, Mormon underwear holds a curious place in American society. Because it’s so secret — and kept unseen — many people are curious about the tradition.

When Mormon politician Mitt Romney ran for president in 2012, for example, a photo that appeared to show his temple garment under his shirt spread like wildfire. Commenters online retweeted the photo, asked questions, and mocked the candidate. People even called it Mormon magic underwear, a term that especially rankles church officials. 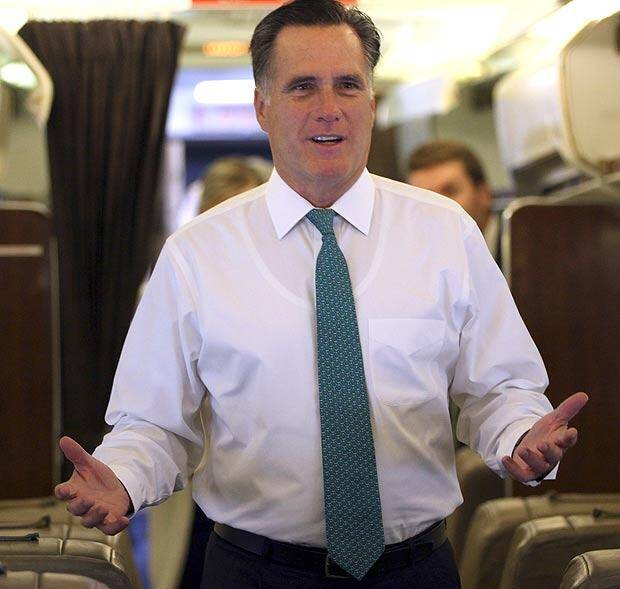 TwitterMitt Romney in 2012, when the faint trace of an undershirt sparked questions about “Mormon underwear.”

“These words are not only inaccurate but also offensive to members of The Church of Jesus Christ of Latter-day Saints,” the church said in 2014.

Though Mormons are taught that the undergarments are the “Armor of God” — and significant myths exist about temple garments saving people from things like car crashes — the church insists that there’s no such thing as Mormon magic underwear, saying, “There’s nothing magical or mystical about them.”

“Church members ask for the same degree of respect and sensitivity that would be afforded to any other faith by people of goodwill,” the church said, requesting that people stop using the pejorative framing of “Mormon magic underwear” when referring to their sacred temple garments.

That said, some Mormons, especially women, think that there needs to be more public discourse about temple garments.

She suggested designing new Mormon underwear that was a “buttery soft, seamless, thick waistband that’s not cutting into my spleen, breathable fabric.”

Another woman told The New York Times, “People are scared to be brutally honest, to say: ‘This isn’t working for me. It isn’t bringing me closer to Christ, it’s giving me U.T.I.s.” She noted that the garments are a “constant” topic of conversation in private Facebook groups for Mormon women.

The fight to modernize Mormon women’s undergarments continues, but it has brought a previously private matter into a very public spotlight.

After this look at the Mormon underwear known as the temple garment, read up on the often dark history of Mormonism. Then, discover the story of Olive Oatman, the Mormon girl whose family was slaughtered, leaving her to be raised by the Mohave.