Even after a cancer diagnosis, hip surgery, and 14 stitches to the head, Jimmy Carter hasn't let age or illness keep him from building houses with Habitat for Humanity. 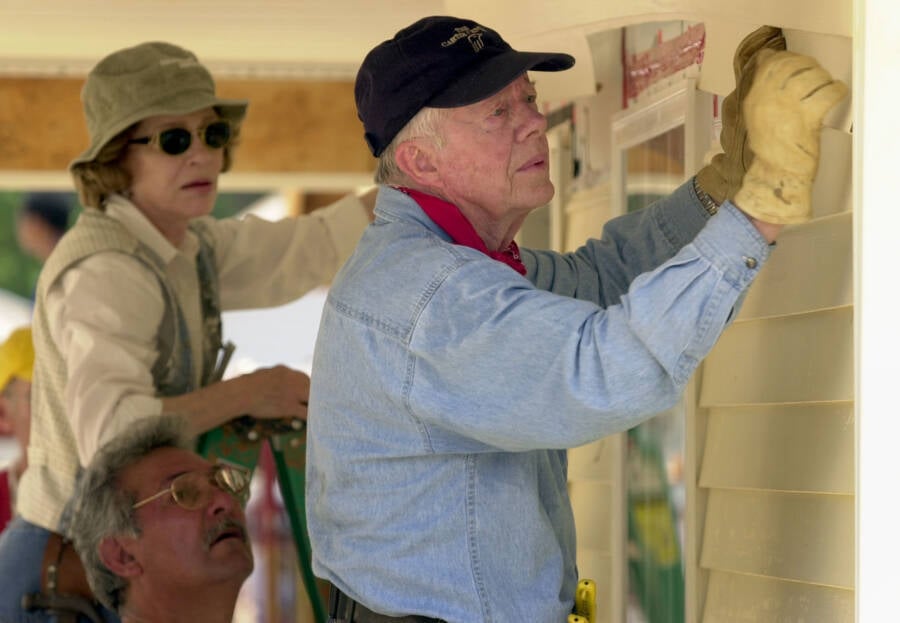 Erik S. Lesser/Getty ImagesFormer U.S. President Jimmy Carter and his wife, Rosalynn, attach siding to the front of a Habitat for Humanity home in LaGrange, Georgia in 2003.

For many, building homes for Habitat for Humanity is a once or twice in a lifetime experience. Many of the non-profit’s volunteers come to the projects through school or mission trips, or as fulfillment for required volunteer hours.

Not President Jimmy Carter. Many volunteers can boast of building one or two homes, but through the Carter Work Project, an annual weeklong build around the globe, Jimmy Carter has helped build more than 4,000 houses in the last 35 years.

Even more impressive is the fact that he’s contributed to projects while recovering from hip, liver, and brain cancer surgeries. And even at age 95, he’s still no stranger to a hammer.

In March of 1984, three years after leaving the Oval Office, Jimmy Carter and his wife, Rosalynn, volunteered to build houses for Habitat for Humanity in Americus, Georgia. What they saw astounded them.

“Habitat has successfully removed the stigma of charity by substituting it with a sense of partnership,” Jimmy Carter said about the organization. “The people who will live in the homes work side by side with the volunteers, so they feel very much that they are on an equal level.” 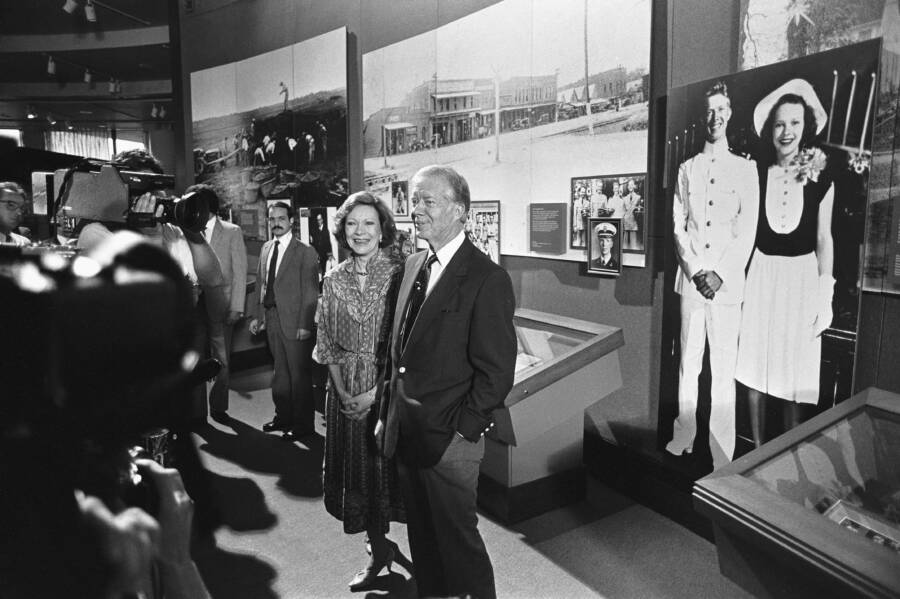 Getty ImagesJimmy Carter and his wife, Rosalynn, give members of the press a tour at a special preview of the new Carter Presidential Center.

Indeed, that partnership is what inspired the Carter family the most.

Moved by the way that the project aligned with their religious values and their love of giving back, the Carters invited Habitat for Humanity to partner with the Carter Center, the family’s own nonprofit for human rights. Together, the two organizations founded the Carter Work Project, which brings Habitat builds to different parts of the world for week-long projects once a year.

Since then, the Carters have dedicated generous portions of their time to Habitat builds. Between 1984 and 2019, the couple contributed to the building or repairing of roughly 4,331 homes. Along with the help of 103,000 volunteers, they’ve built those houses in 14 different countries.

Most recently, the Carters contributed to a build in Nashville, Tennessee in October 2019 – despite the fact that he had fallen and gotten stitches in his forehead the day before.

In October 2019, Jimmy Carter fell in his Plains, Georgia home and nicked his head on a cabinet. He was taken to a hospital and received 14 stitches and an eye patch, and was told to rest up.

Instead, he traveled to Nashville, for a week-long Habitat for Humanity build. The Carter Center reported that the former president and first lady planned on building 21 homes in the area, alongside several hundred volunteers including country music legends Garth Brooks and Trisha Yearwood.

Despite his medical setback, the Carters showed up in full force for the build, and even poked fun at the eyepatch the former president was sporting. He admitted he didn’t know how much physical effort he was going to be able to put into the project, but that he would still be there to support in any other way he could.

Jimmy and Rosalynn Carter contributed something to each of the houses. “All 21 houses will have something we built,” he said.

His forehead injury wasn’t the only health setback he suffered before the October build. He underwent hip surgery that March, and despite the fact that he was ordered to rest, he continued to plan for the October trip, making statements and plans in full anticipation that he would be there.

Jimmy Carter talks about why he loves building houses for the needy.

In 2017, Carter was building homes in Canada when he collapsed from dehydration. Despite the strenuous conditions, the 92-year-old Carter had persevered and worked through the heat of the day. Even after being treated, the build continued.

Jimmy Carter Has Built Houses Even Through Cancer

In 2015, Jimmy Carter announced that he had been diagnosed with melanoma, and that despite an operation to remove part of his liver, the cancer seemed to be spreading. Four spots had been discovered in his brain, and Carter believed that he had just weeks to live.

One question that arose during the announcement of the diagnosis was whether or not Carter would continue the charity work he’d become so well known for. The resounding answer? Absolutely.

“Habitat gives us an opportunity which is very difficult to find: to reach out and work side by side with those who never have had a decent home — but work with them on a completely equal basis,” he said of the nonprofit. “It’s not a big-shot, little-shot relationship. It’s a sense of equality.”

Even after his diagnosis and several surgeries and treatments, Carter continued to step out into the field. Whether he was simply hammering a few nails, or climbing on second-story beams, Carter never backed out of a project because he wasn’t feeling well.

Over the past few years, Carter has continuously devoted time to the organization – and many others – with a mostly clean bill of health.

In March of 2016 he announced that he no longer needed cancer treatment. After undergoing extensive MRI testing, it was revealed that the disease was no longer spreading.

Today, he maintains that doctors are “keeping an eye” on him, should his cancer reemerge, but that he’s doing well. Aside from a few bumps and bruises over the last year, the 95-year-old humanitarian and oldest-living president is doing remarkably well.

As far as his charity work goes, it seems there’s no stopping Jimmy Carter. Though no new plans have been announced after the October build, it’s safe to assume that as long as he is willing and able (and, apparently even if he’s not fully physically able) he will support the organization with his time, energy, and resources, and continue to live his life of legendary humanitarianism.

After learning about the astounding number of houses Jimmy Carter has helped build, learn more about President Jimmy Carter with this list of 23 amazing facts. Then, check out the most interesting things about each U.S. president.