23 Facts You Didn’t Know About Jimmy Carter, From UFOs To Elvis Presley

Brush up on your knowledge of the 39th president of the United States with these little-known Jimmy Carter facts. 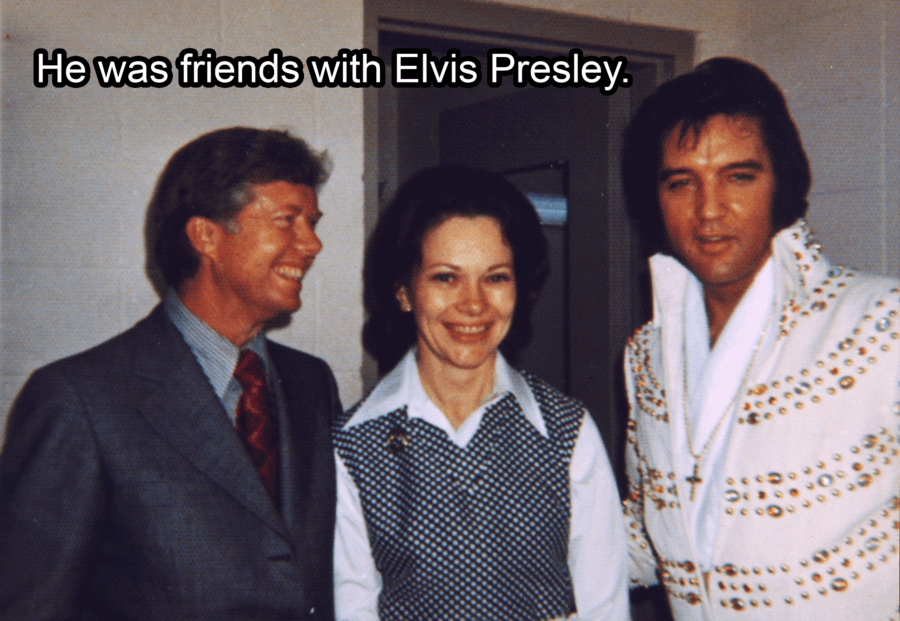 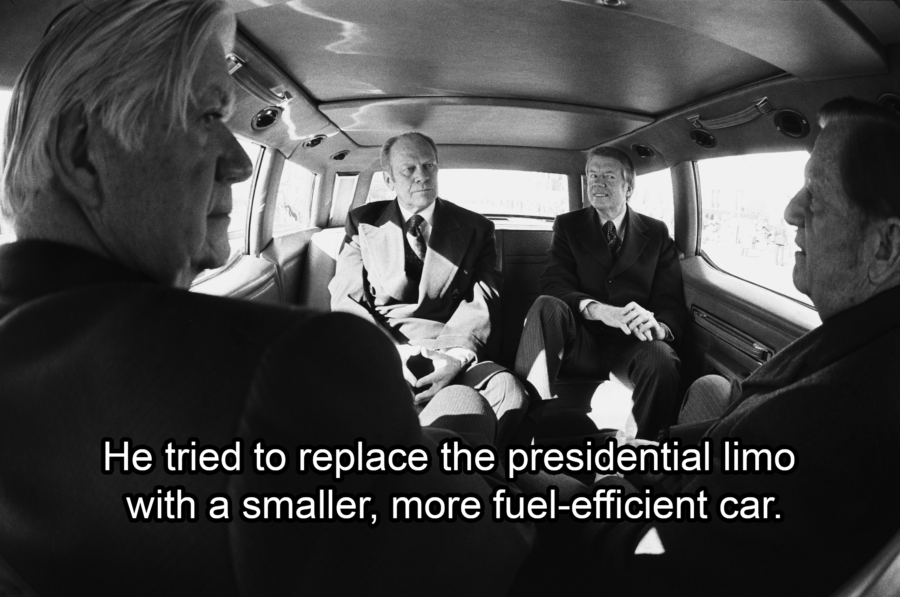 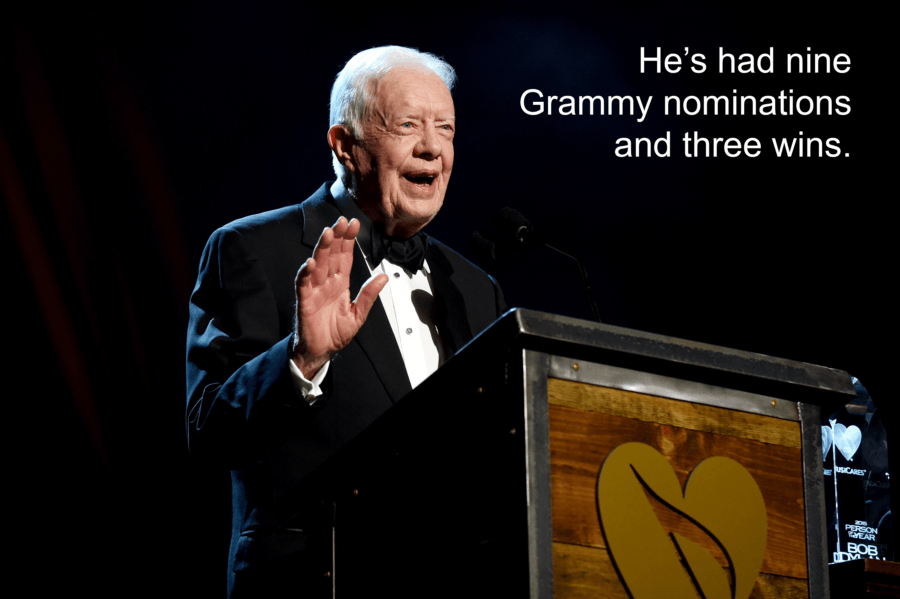 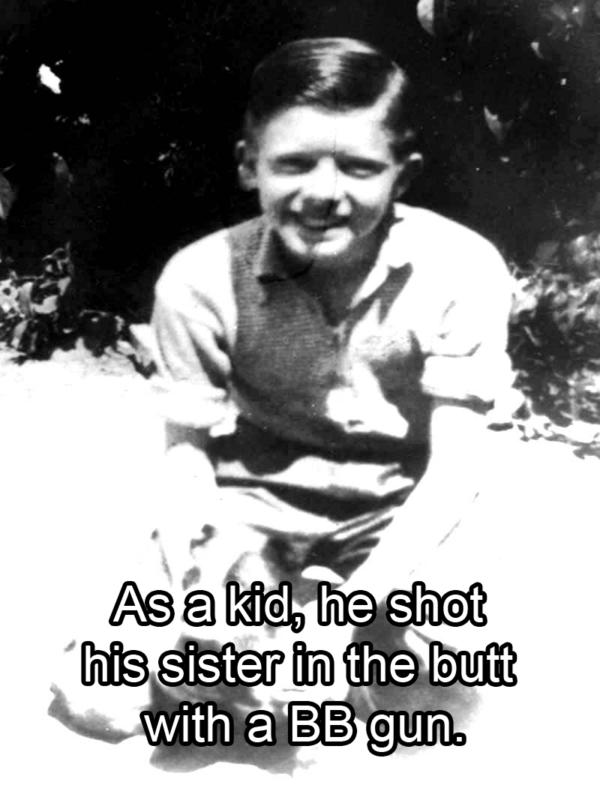 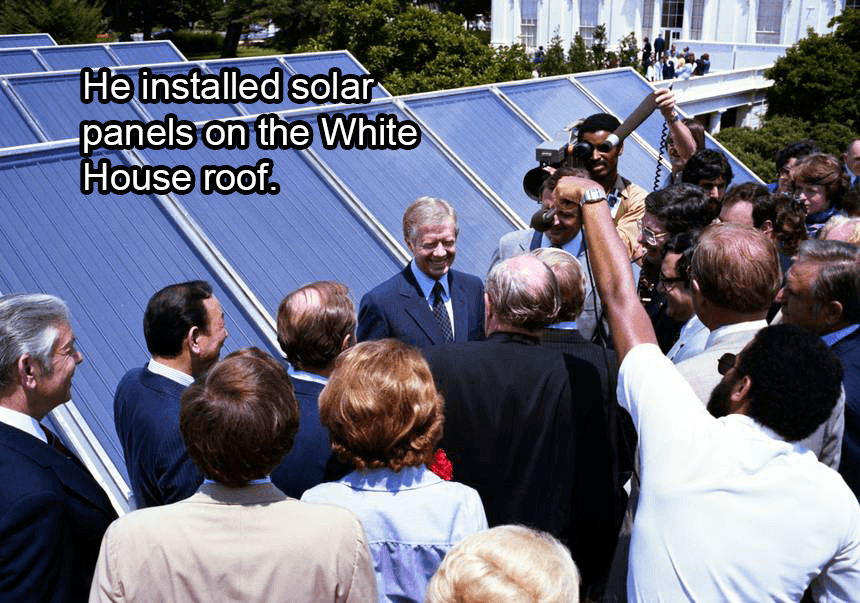 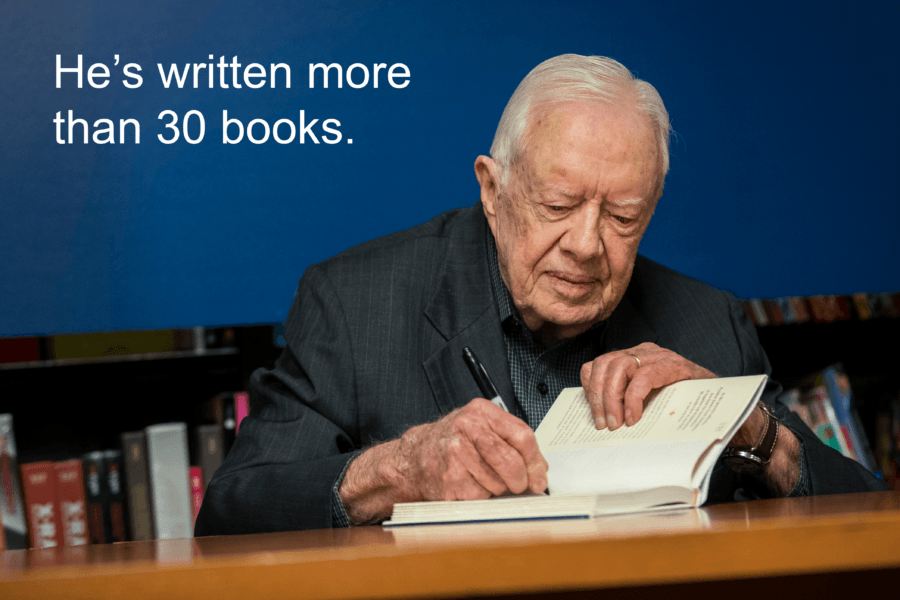 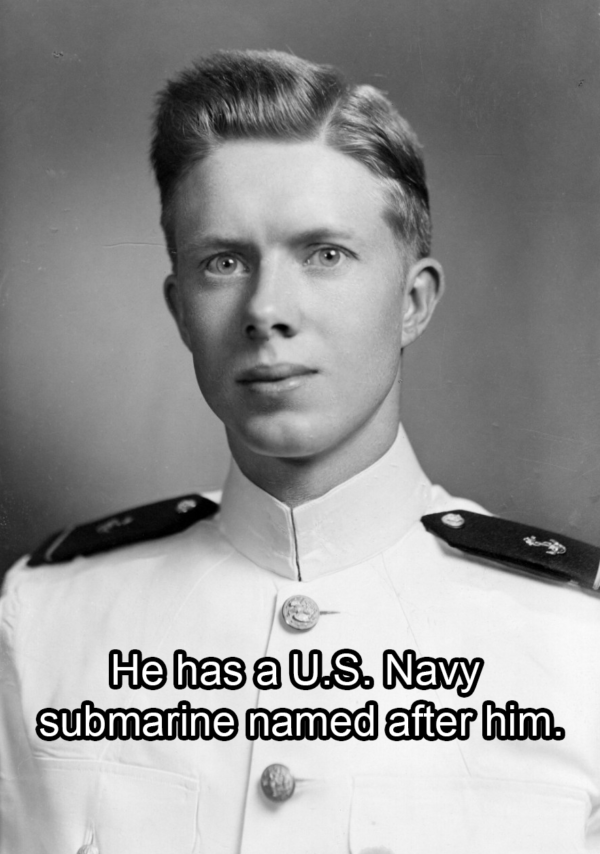 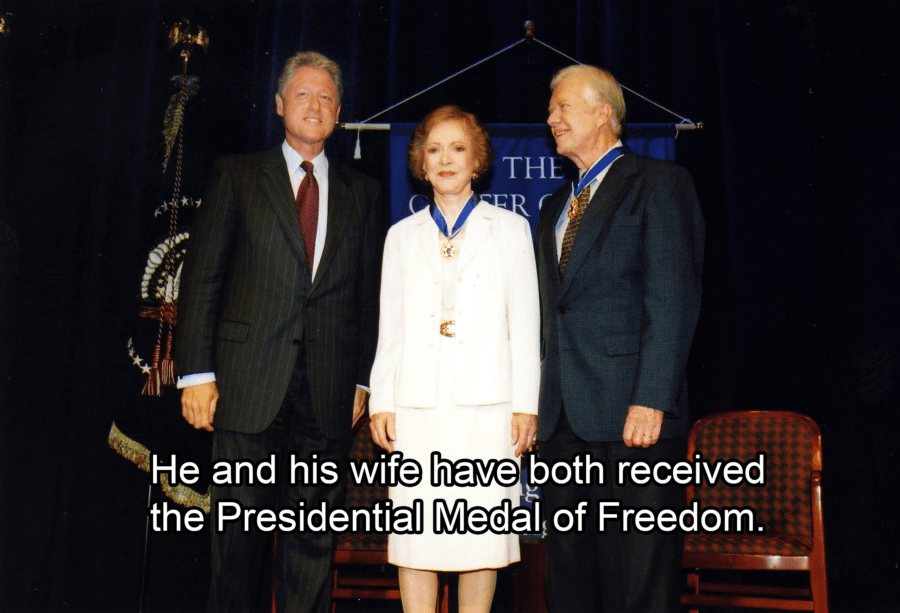 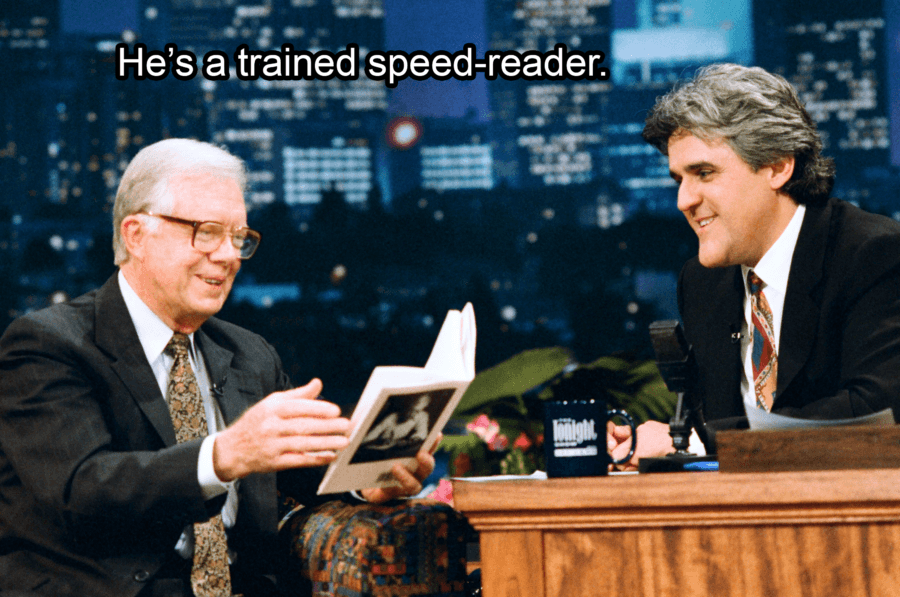 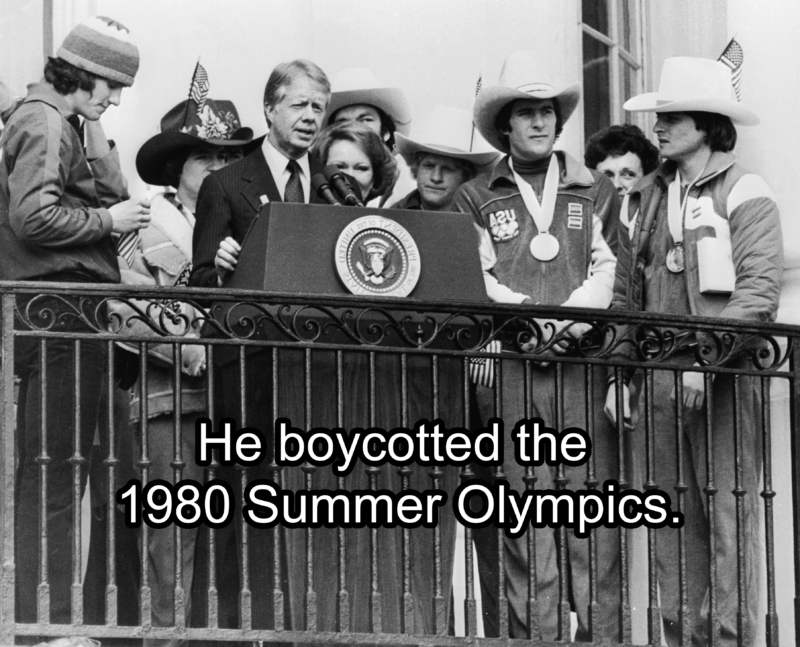 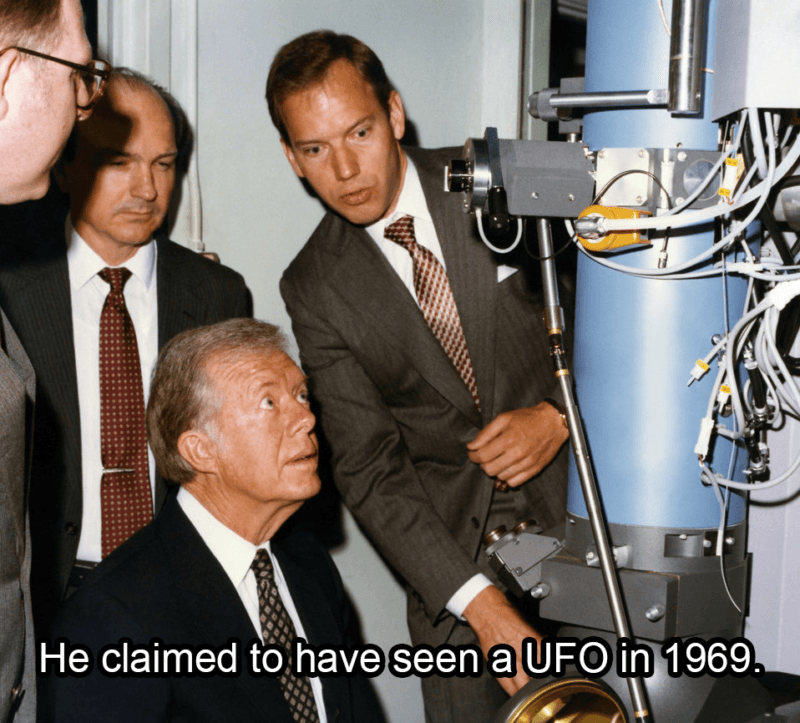 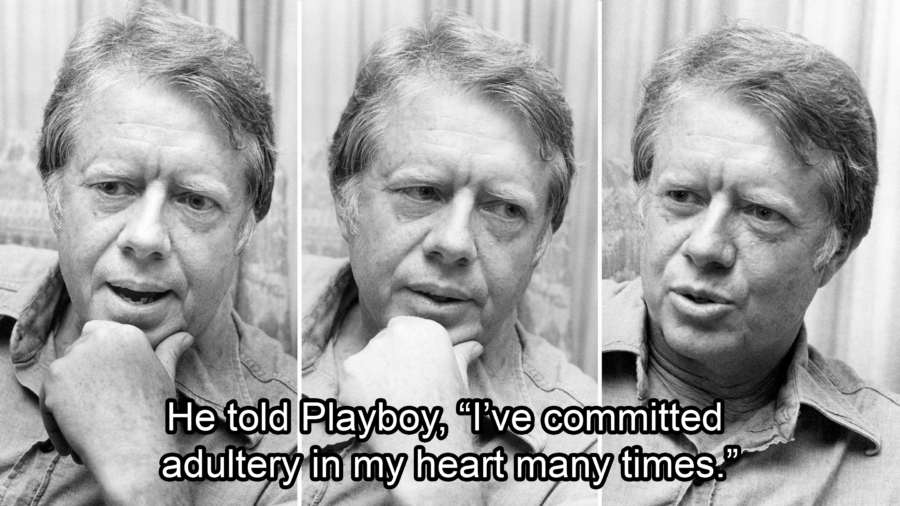 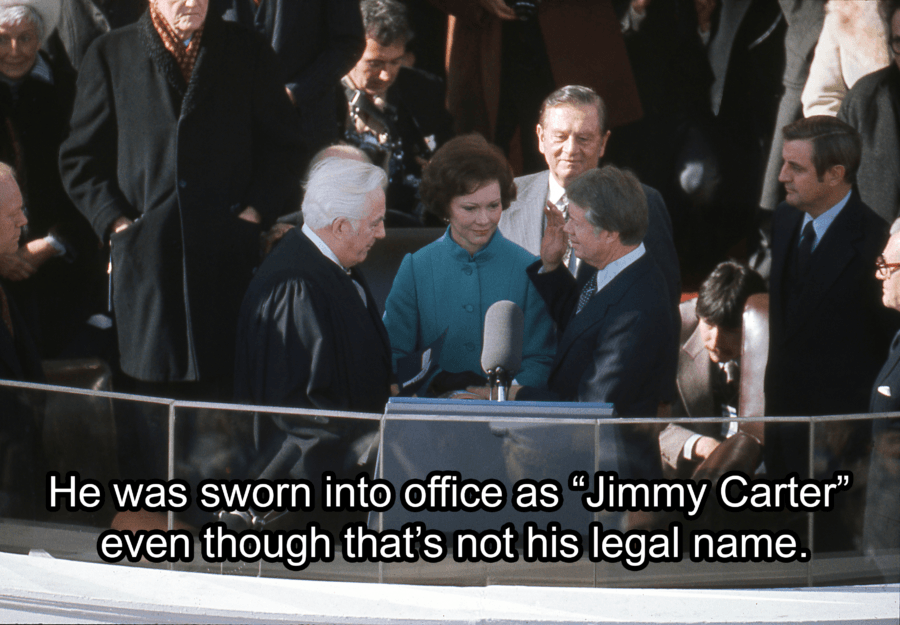 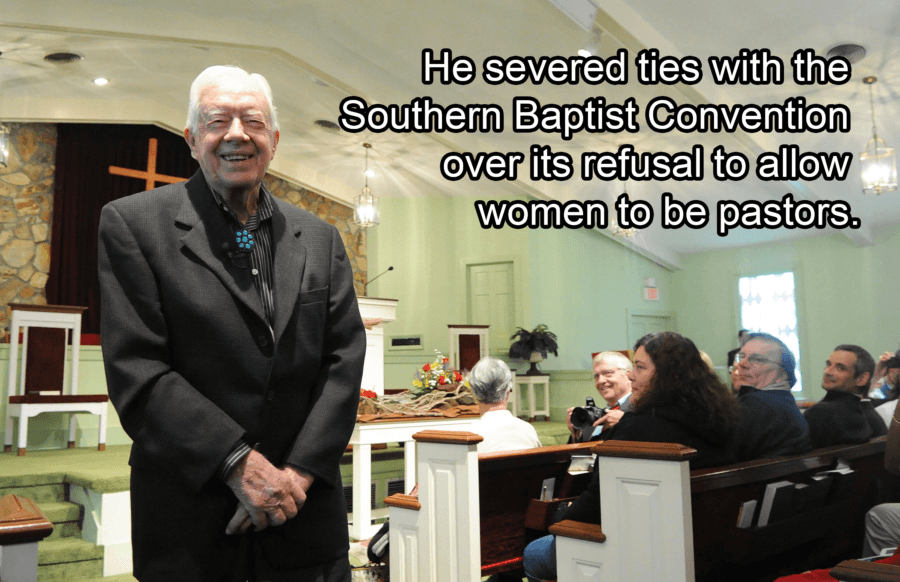 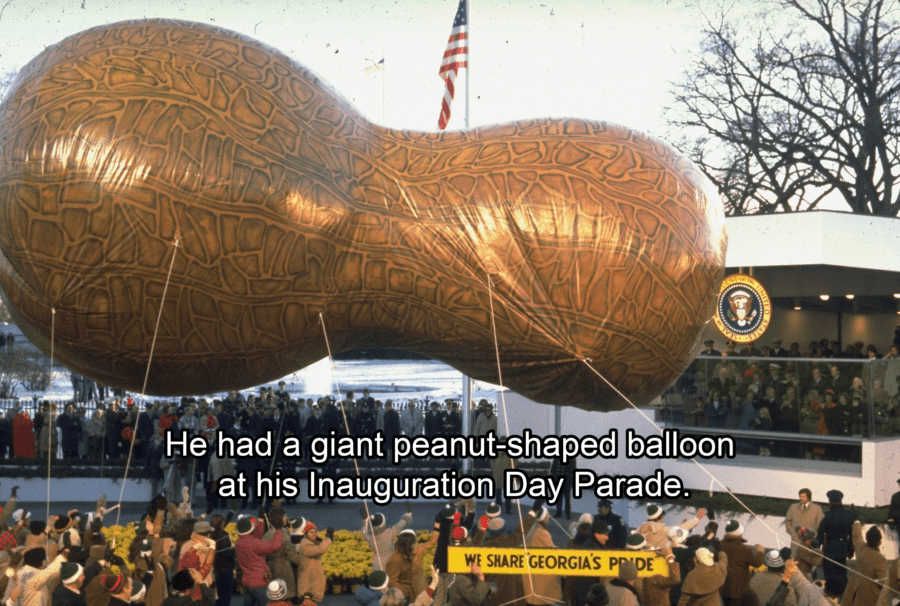 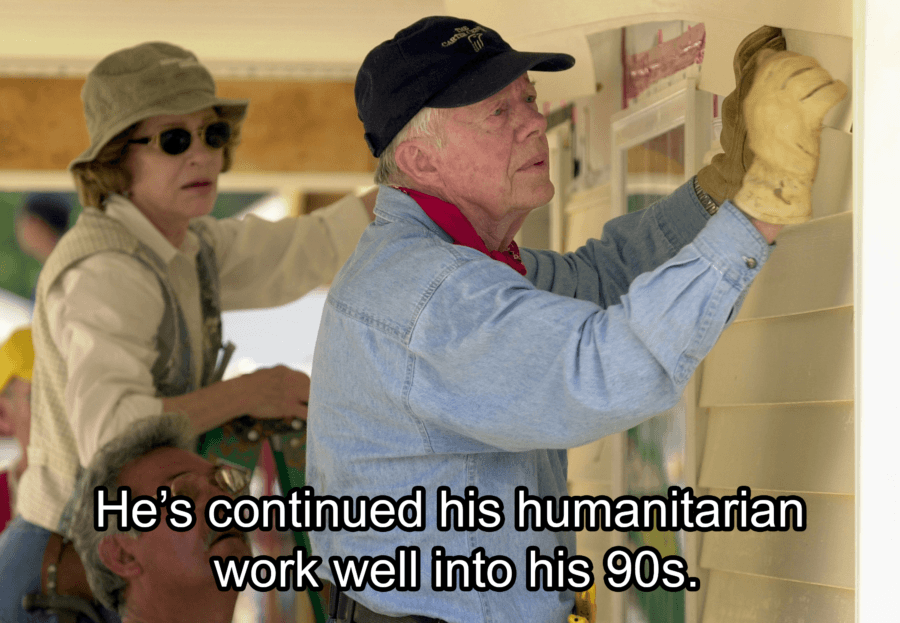 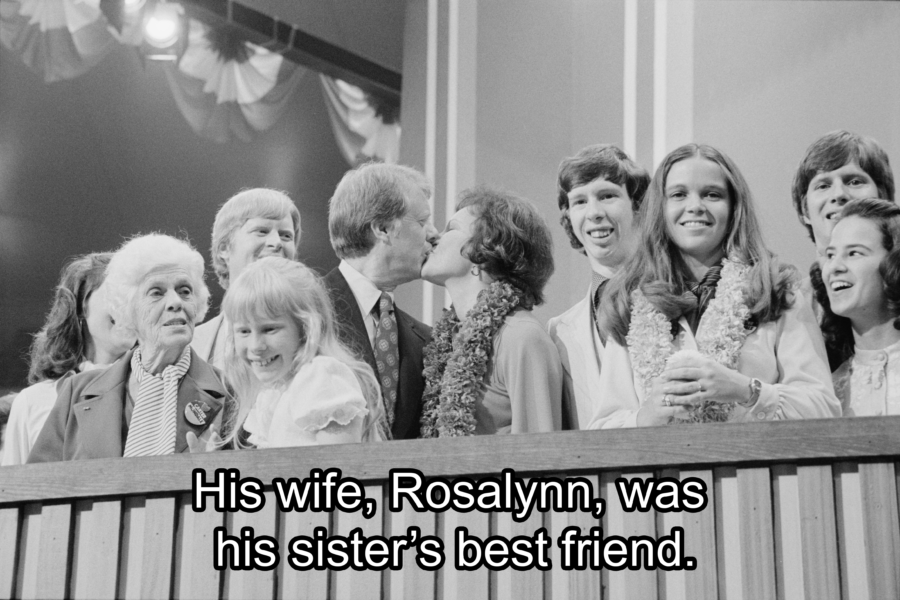 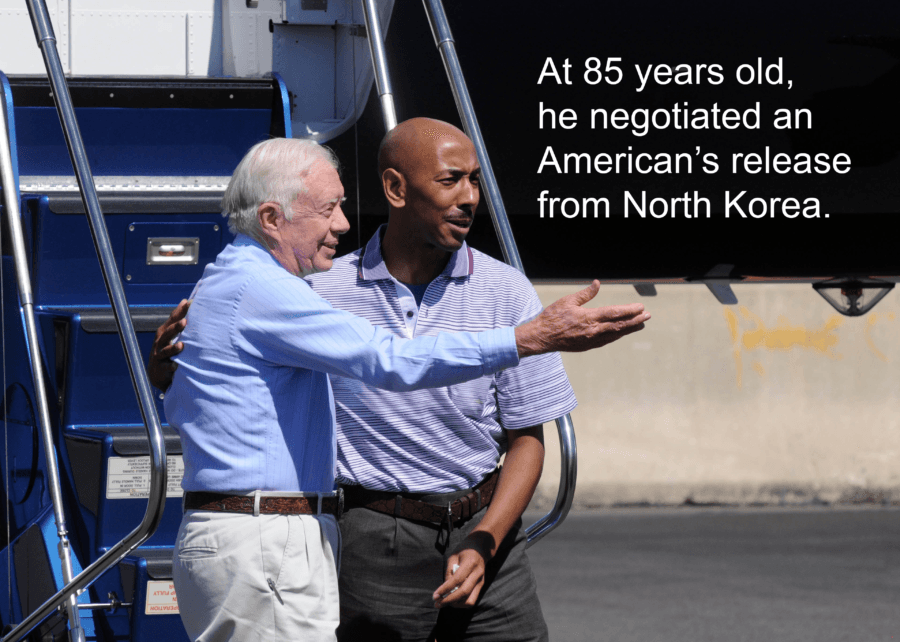 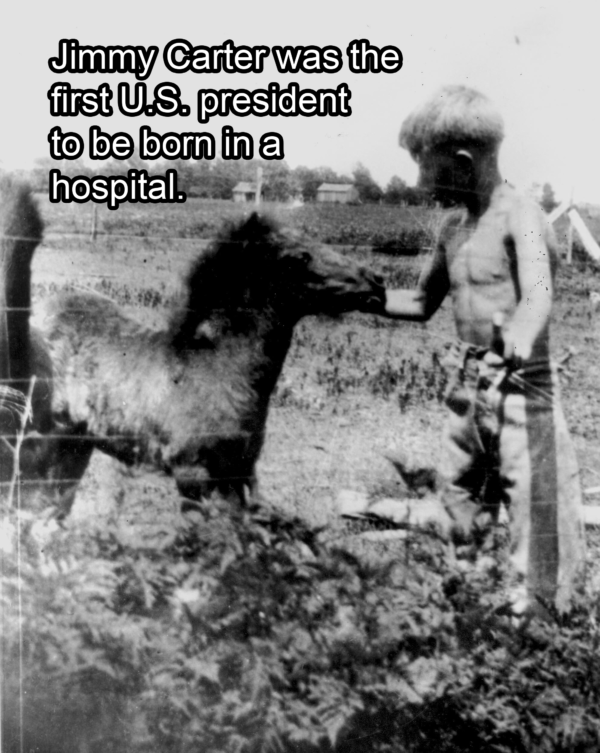 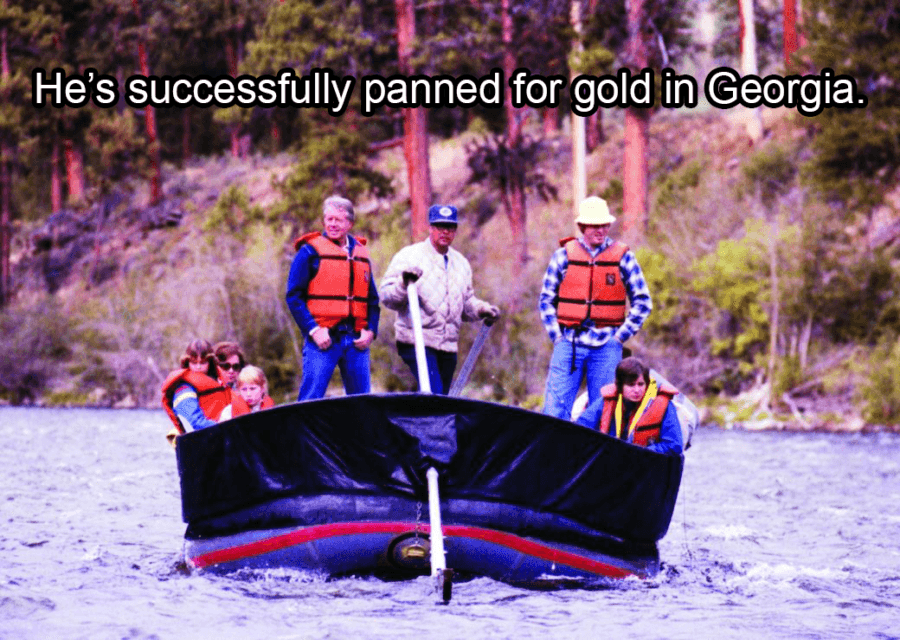 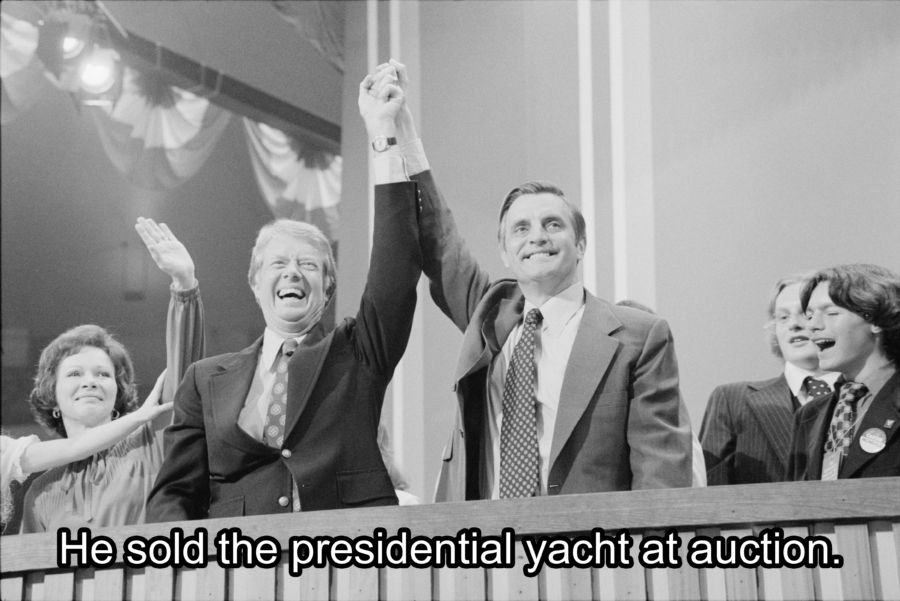 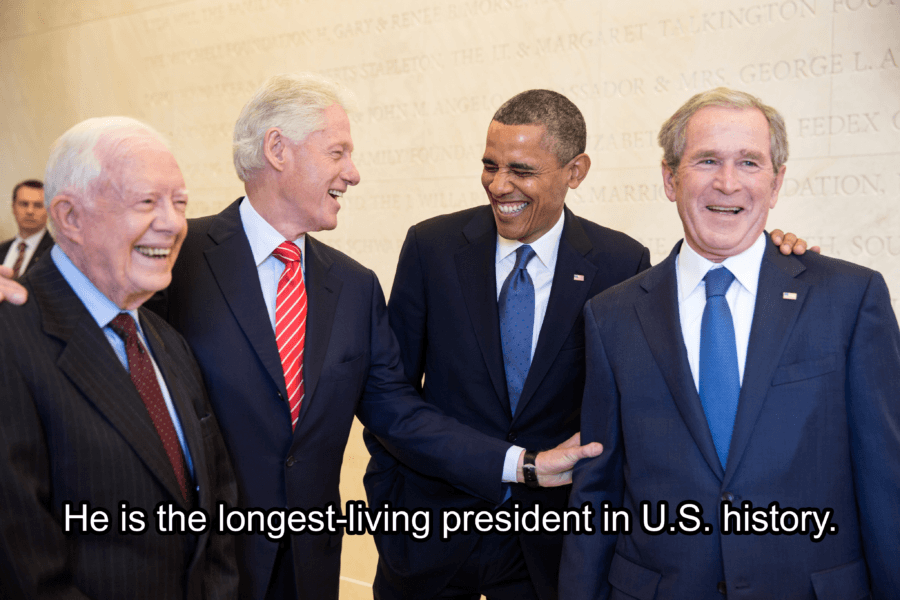 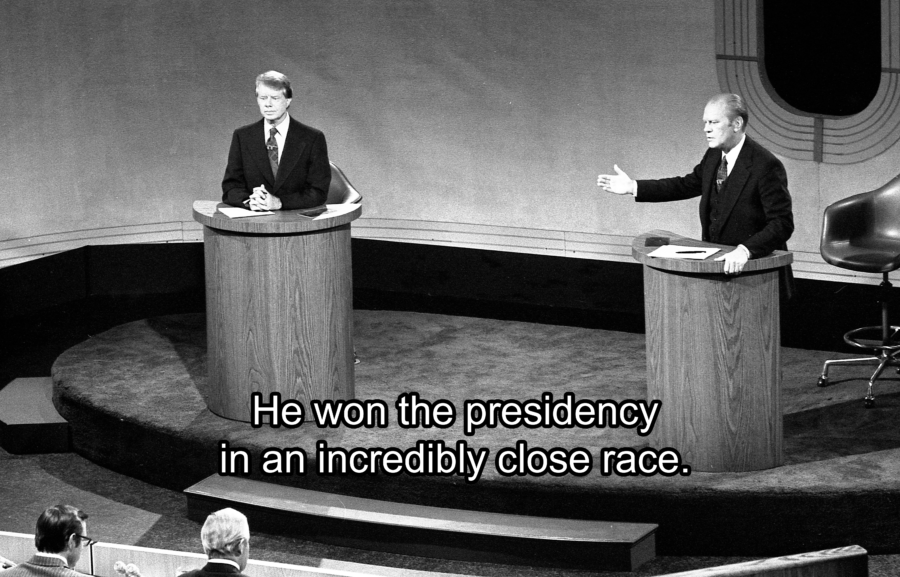 1 of 24
He was good friends with Elvis Presley, who once called him directly at the White House in a drug-filled stupor to seek a pardon for a friend of his. Getty Images
2 of 24
Upon taking office, he sought to replace Richard Nixon's large presidential limo with a smaller, more modest one. But during his Inauguration Day parade, his two-door Chevy Chevette failed in the middle of the route. He and First Lady Rosalynn Carter walked the rest of the way.Getty Images
3 of 24
Nominated for nine Grammys, he's won three of them – including one in 2019. Getty Images
4 of 24
Though legendarily a good person, he had several youthful indiscretions, such as stealing a penny from the church collection tray and shooting his sister in the butt with a BB gun. National Park Service
5 of 24
He installed solar panels on the White House roof in 1979, saying "in the year 2000 this solar water heater behind me... will still be here supplying cheap, efficient energy." Unfortunately, the Reagan administration removed them.Public Domain
6 of 24
He has written more than 30 books — not just personal memoirs, but poetry books as well. Drew Angerer/Getty Images
7 of 24
He has a U.S. Navy submarine named after him. It's the seventh submarine named after a living person, and the only submarine named after a president who's still alive.Naval History and Heritage Command
8 of 24
In 1999, he and his wife, Rosalynn, received the Presidential Medal of Freedom, the highest honor for an American civilian.Carter Center
9 of 24
He took speed-reading classes when he became president, since he had to read 300 pages of documents every day. He's read about three books per week for much of his life.Getty Images
10 of 24
He boycotted the 1980 Summer Olympics after the Soviet Union refused to pull their troops out of Afghanistan, inspiring dozens of other countries to follow suit. Getty Images
11 of 24
In the early 1970s, as governor of Georgia, Jimmy Carter filed a report stating that he had seen a UFO "about the size of the moon" with "very bright changing colors" that "hovered about 30 degrees above the horizon and moved in toward the earth and away before disappearing into the distance."Public Domain
12 of 24
He did a campaign interview with Playboy, during which he admitted he had "looked on a lot of women with lust. I've committed adultery in my heart many times." Time Magazine called the quote one of the Top 10 Unfortunate Political One-Liners. Playboy
13 of 24
Though his legal name is James Earl Carter II, he was sworn into office as "Jimmy Carter." Corbis Historical/Getty Images
14 of 24
A third-generation Southern Baptist, Jimmy Carter severed ties with the Southern Baptist Convention over its refusal to allow women to be pastors. He still attends church services and teaches Sunday school.Chris McKay/Getty Images
15 of 24
To honor his peanut-farming roots, he had a giant peanut-shaped balloon as part of his Inauguration Day parade. Sahm Doherty/Getty Images
16 of 24
Carter has continued his humanitarian work well into his 90s. In October 2019, he helped with a Habitat for Humanity build a day after falling and getting stitches.Erik S. Lesser/Getty Images
17 of 24
His wife, Rosalynn, was his childhood sweetheart and his sister's best friend. Wikimedia Commons
18 of 24
At 85 years old, he negotiated the release of an American citizen from North Korea.Darren McCollester/Getty Images
19 of 24
He was the first U.S. president to be born in a hospital, as his mother was a nurse.National Park Service
20 of 24
"On weekends when I was governor," he said during his 1976 presidential campaign, "my wife and I often rode the wild rivers of Georgia in rafts, canoes, and kayaks. We panned successfully for gold in a remote north Georgia stream."Jimmy Carter Presidential Library and Museum
21 of 24
He sold the presidential yacht, citing excess and claiming he was no better than his voters just because of his elevated political power. Wikimedia Commons
22 of 24
He's the longest-living president, the first to live 40 years after his inauguration, and the first to reach the age of 95. Wikimedia Commons
23 of 24
His 1976 election was a close one. He won with 50.1 percent of the popular vote, and just 297 out of 538 electoral votes. Wikimedia Commons
24 of 24 He's been called the "most underrated president," and the "nicest president" in U.S. history, but when you look at the facts of Jimmy Carter's life, he may have been one of the most interesting ones as well.

Born in rural Plains, Georgia in 1924, James Earl Carter Jr. was friendly from an early age. Growing up on a peanut farm, his best friends were the children of the black farmers who worked for his father. He boiled, packaged, and sold peanuts in downtown Plains from when he was five years old, and when he was in high school he worked at an ice cream and hamburger stand.

In high school, he played varsity basketball and read more than any of his classmates. He enrolled at Georgia Southwestern College and then at the Georgia Institute of Technology. With the Future Farmers of America he had developed an interest in woodworking, which he kept for the rest of his life. But he had another interest as well — an interest in joining the Navy.

In 1943, after studying mathematics for a year at Georgia Tech, Jimmy Carter enrolled in the Naval Academy in Annapolis, Maryland. While at Annapolis, Carter got certified in submarines — the only president to have done so. He spent much of his time with the Navy working on nuclear submarines, taking graduate courses on reactor technology and nuclear physics.

Shortly after his graduation from the Academy in 1946, Carter married his longtime love Rosalynn Smith, his sister's best friend. For seven years, the two traveled around New England while Carter worked for the Navy as a submarine tech.

In 1953, when his father died and the family peanut farm was in peril, Carter gave up his naval career and moved home to help with the farm. There, while working in rural Georgia, he became passionate about civil rights. Seeing families struggle under Jim Crow laws instilled a fire in Carter which drove him to support the growing civil rights movement.

On a whim, he decided to run for the Democratic nomination for his local State Senate seat. The initial results said he lost his primary, but after pushing for a recount he came out on top. He won the general election, and in 1963 he joined the Georgia State Senate. In 1970, he was elected governor of Georgia.

Though a relative outsider to politics, as a Navy lieutenant-turned-peanut farmer, after his governorship and despite a low national profile, Jimmy Carter won the Democratic presidential nomination in 1976. With the Watergate scandal fresh in the public's minds, he ran as a dark horse candidate far from the corrupting influence of Washington. Sweeping the southern states, he beat Vice President Gerald Ford in an incredibly close race.

In 1977, President Jimmy Carter took office. His first order of business was to pardon all Vietnam War draft dodgers, a controversial move. It wouldn't be the first time he drew controversy; over his four year term in office he made several large changes, not all of which were unanimously accepted.

He created the Department of Energy and the Department of Education, as well as several new policies geared toward solving the energy crisis. He also became heavily involved in foreign affairs and was responsible for facilitating the Camp David Accords, the Panama Canal Treaty, and the second round of the Strategic Arms Limitation Talks.

But the last year of his presidential tenure was marked with several unfortunate situations that his constituents believed he handled poorly. The Iranian Hostage Crisis and the 1979 Energy Crisis were both high on that list, as well as the Three Mile Island Nuclear Crisis and the Soviet invasion of Afghanistan.

Many believe that the Cold War was escalated by Carter's response to that invasion; he imposed a grain embargo on the Soviet Union and boycotted the 1980 Summer Olympics. That plus the U.S.'s lackluster economy following a recession in the mid-1970s forced a precipitous drop in Carter's approval ratings, to as low as 28 percent. At the time, his were the lowest approval ratings ever recorded in the history of presidential polling.

But despite serving only one term, Carter holds a special place in the pantheon of American presidents. For more so than any other president in modern memory, he dedicated his post-political career to advocacy, public service and global humanitarian causes.

Post-presidency, Jimmy Carter and his wife Rosalynn became heavily involved in humanitarian work in their community and across the country. In 1982, they opened the Carter Center in Atlanta, Georgia, which devotes time and money to promoting peace and health around the world. He won a Nobel Peace Prize in 2002 for his work with the Center.

They also began advocating for Habitat for Humanity in the mid-1980s, not only helping them raise funds but also lending an actual hand to their home-builds – even in October 2019, just one day after a fall that led to stitches, a 95-year-old Jimmy Carter helped build a home in Tennessee.

In 2010, at age 85, he flew to North Korea and negotiated the release of an American who'd been sentenced to eight years of hard labor for unlawfully entering the country.