Legend has it that Joaquín Murrieta and his band of outlaws terrorized California during the Gold Rush to avenge the Mexicans who were mistreated by American miners.

In the mid-1800s, a mysterious outlaw terrorized California. Joaquín Murrieta (sometimes spelled Murieta) was said to rob and murder the gold miners who were pushing indigenous Mexicans out of the land that had once belonged to them. But did he ever really exist?

There were certainly bandits and vicious gangs who roamed the California territory after the United States acquired the land from Mexico in 1848. As settlers from eastern states moved West in droves during the Gold Rush, new laws made it more difficult for Mexicans and Chicanos in the area to survive.

In the early 1850s, newspapers began reporting on violent outlaws named Joaquín. It’s likely that there were numerous criminals by the same name, but they all seemingly became conflated in the minds of the general population as one man: Joaquín Murrieta.

And in 1854, Cherokee author John Rollin Ridge, or Yellow Bird, released a novel called The Life and Adventures of Joaquín Murieta, the Celebrated California Bandit, cementing Murrieta’s name in legend as a sort of Mexican Robin Hood. His life of crime may be just that, though — a legend.

According to the Contra Costa County Historical Society, Joaquín Murrieta was born in the northwestern state of Sonora, Mexico around 1830. When news of the California Gold Rush broke in the late 1840s, he traveled north with his wife, Rosa Feliz, and her brothers.

Hard-working and devoted, Murrieta and his beautiful young wife quickly set up a small residence in the hills while he spent his days panning for gold. By 1850, Murrieta was finding success as a prospector, but life in California wasn’t what he had imagined it to be. 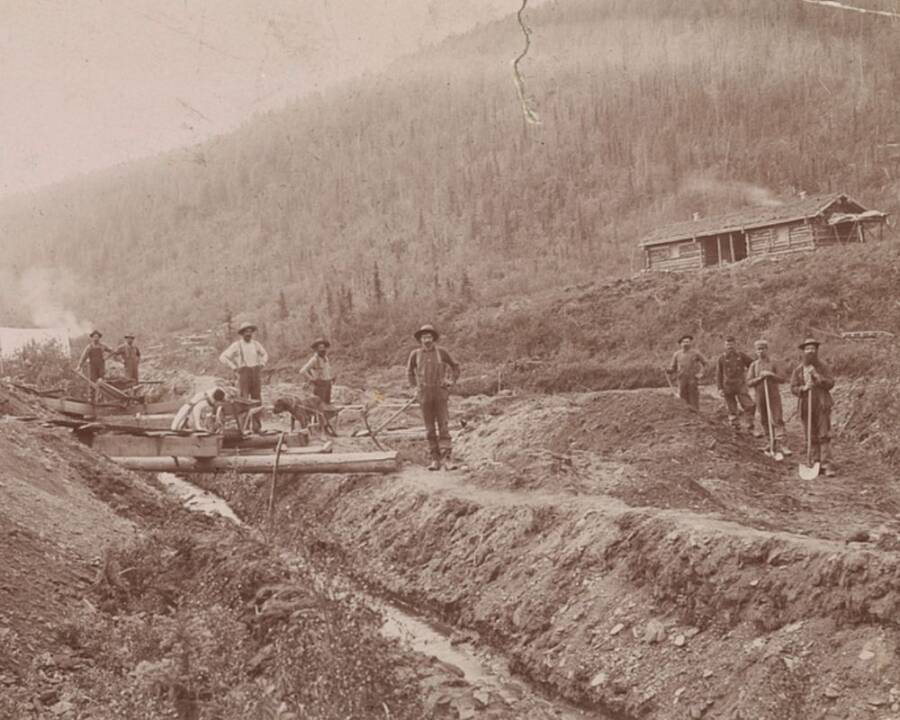 In February 1848, the Treaty of Guadalupe Hidalgo brought an end to the Mexican War and ceded a large piece of Mexican territory, including California, to the United States. With the discovery of gold in the California mountains around the same time, American miners flooded in. The miners, resenting the competition from Mexican prospectors, banded together to harass and drive them out of the area.

The new state government even passed laws to keep people from places like Mexico and China from mining for gold, according to HISTORY. The Foreign Miners’ Tax Law of 1850 imposed a monthly tax of $20 on non-Americans who wanted to pan for gold. That’s nearly $800 in today’s money — and it effectively shut people like Murrieta out of the Gold Rush.

With his days as a prospector over, legend has it that Murrieta soon turned to a life of crime.

The Bloody Origins Of The “Mexican Robin Hood”

If we take Cherokee author Yellow Bird’s novel at face value, Murrieta’s days as a bandit began when a group of Americans who were jealous of his mining success tied him up, beat him, and raped his wife in front of him.

Murrieta then quit his claim and left the area to become a card dealer. But once again, he became a victim of prejudice when he borrowed a horse from his half-brother. On the way back from the man’s house, Murrieta was seized by a mob who insisted the horse was stolen.

Murrieta was whipped until he told them where he’d gotten the horse. The men immediately surrounded his half-brother’s house, dragged him outside, and lynched him on the spot.

After the lynching, Murrieta decided he’d had enough. He wanted justice, not just for himself, but for all the other mistreated Mexicans in California. And like all great vigilantes, he was going to have to break the law to get it. 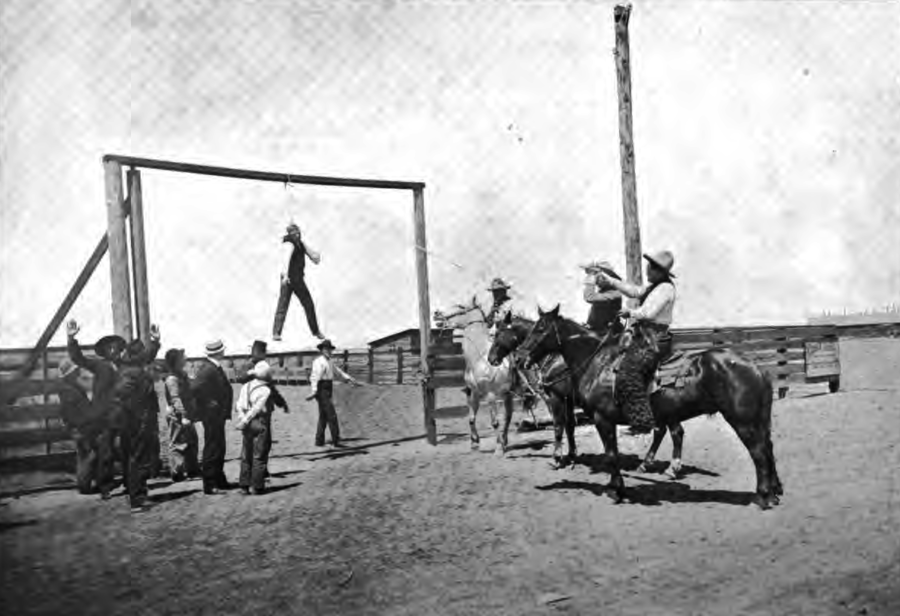 Of course, there is no solid evidence for much of this. What we do know is that the one of the brothers of Murrieta’s wife, Claudio Feliz, was arrested for stealing another miner’s gold in 1849, and by 1850 he was the leader of a bloody gang that frequently robbed and murdered lone travelers.

According to the Contra Costa County Historical Society, records show that Feliz was killed in September 1851, and leadership passed to Joaquín Murrieta.

Joaquín Murrieta And His Fierce Gang Of Outlaws

From here, Murrieta’s story turns largely to legend. As the new head of the gang, Murrieta took to the hills once again to find gold. But this time he wasn’t going to dig for it.

Together with his fellow outlaws, including a Mexican army veteran named “Three-Fingered Jack” who’d had two fingers blown off in a firefight during the Mexican-American War, Murrieta targeted American miners, pulling them off their horses with lassos, murdering them, and stealing their gold.

Murrieta’s gang became infamous throughout the territory. Ranchers complained to authorities that the men were descending from remote hideouts in the hills to steal their horses. Miners lived in fear of being taken on the roads by the band of criminals. No American in the territory was safe from Murrieta’s revenge.

Stories soon spread of Murrieta giving the gold he’d taken to poor Mexican natives and targeting the people who were taking advantage of them, making him a sort of Robin Hood character. 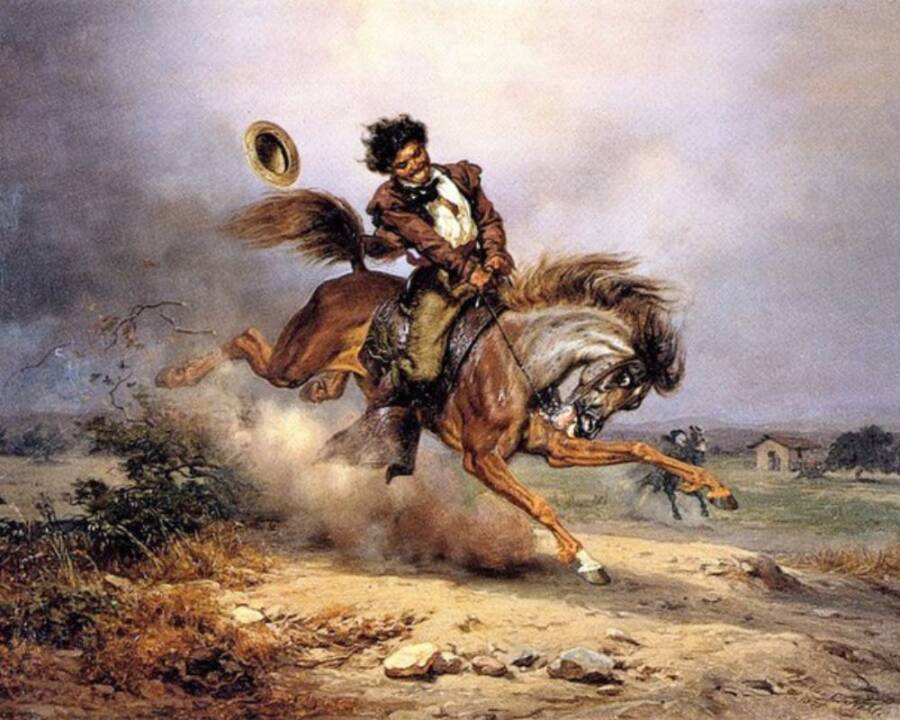 However, yet again, the few records that do exist dispute these tales. According to the Coeur d’Alene Press, Murrieta’s gang actually targeted Chinese miners, because they tended to be more docile and were typically unarmed. This fact alone raises questions about Murrieta’s true intentions.

In early 1853, a gang that was likely led by Murrieta killed 22 miners — mostly Chinese — over the course of just two months. The California government sent a group of men headed by celebrated lawman Harry Love to deliver their own justice to Murrieta. Love had fought in the Mexican-American War, engaging guerrillas in the mountains of Mexico. He used that expertise to lead a group of California Rangers in hunting down the violent outlaw.

The Brutal Downfall Of Joaquín Murrieta

The finale of Murrieta’s story may never be known for sure. The San Francisco Chronicle reports that even newspapers at the time made varying claims about Murrieta’s alleged death.

However, most of the stories about Murrieta agree that Harry Love tracked down the outlaw and his gang in California’s San Joaquin Valley in July 1853. During a bloody shoot-out, Murrieta was killed — and in order to prove that he’d taken down the right man, Love cut off his head and took it with him.

There’s some dispute over whether or not Love actually killed Murrieta. In a time before photography was widely used to identify suspects, Love would have had a hard time identifying the body of a man he’d never seen. But dead or not, Joaquín Murrieta disappears completely from the record after his alleged death in 1853.

Love supposedly pickled the head in a jar full of whiskey and used the grisly souvenir to confirm Joaquín Murrieta’s identity in the mining towns that had experienced his crimes first-hand. The head eventually made its way to San Francisco, where it was displayed at a saloon that charged curious onlookers one dollar to view it. 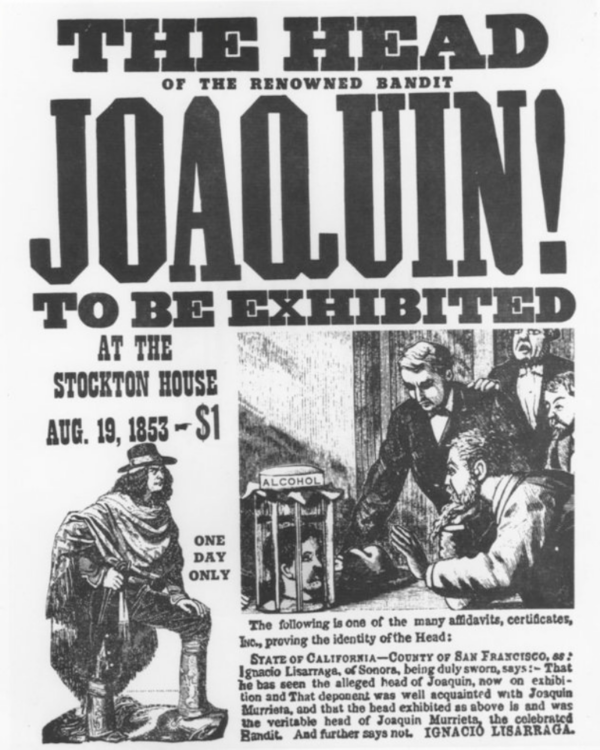 Some believed the head was cursed. Various ghost stories emerged, including one that claimed Murrieta’s ghost appeared every night to the Ranger who had fired the shot that killed him and said, “I am Joaquín and I want my head back.” Two of the men who took possession of the head allegedly had bad luck, with one falling into debt and another accidentally shooting himself.

In 1865, the head that was said to be Joaquín Murrieta’s was displayed at Dr. Jordan’s Pacific Museum of Anatomy and Science in San Francisco. There it remained for 40 years — until it was lost during the Great San Francisco Earthquake of 1906.

But while Murrieta himself is now long-gone, his legacy lives on to this day.

The Lasting Legacy Of The “Robin Hood Of El Dorado”

Yellow Bird’s account of Joaquín Murrieta that was published in 1854, the year after the outlaw’s supposed death, forms many beliefs about Murrieta today. But the real Murrieta was likely more of a violent criminal than a hero.

Many saw the tale of a Mexican prospector who turned to crime after the murder of his family members as a heroic one. This fabled Murrieta fought against an injustice that the Mexicans and Chicanos in California who were now foreigners in their own land were struggling against every day. In many ways, they needed someone like Murrieta, even if he only existed in a book. 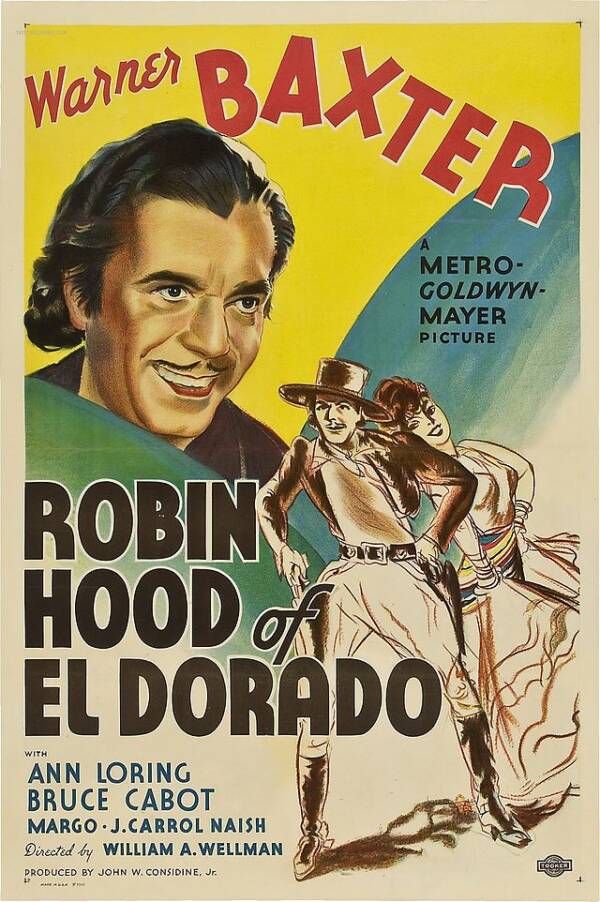 It’s likely that we’ll never know the truth about the real Joaquín Murrieta. Perhaps the Murrieta on record was simply a small-time criminal whose name became mixed up with other outlaws named Joaquín and Harry Love never killed him after all. Or maybe Yellow Bird’s seemingly embellished story isn’t actually far from the truth.

Regardless, the heroic Murrieta was a powerful symbol of resistance, and he remained so long after the “real” Murrieta’s death. Many other books, television shows, and films — including 1998’s The Mask of Zorro, expanded on his story, ensuring his name lived on for future generations.

Ultimately, it’s not a bad legacy for a simple criminal to accidentally leave behind.

After learning the true story of Joaquín Murrieta, check out these photos of life in the real Wild West. Then read about Big Nose George, the Wild West outlaw who was killed and turned into shoes.