The Baffling Disappearance Of Jodi Huisentruit, The News Anchor Who Vanished Forever Just Before A Broadcast

Jodi Huisentruit was a 27-year-old rising star at a local news station in Mason City, Iowa, when she suddenly went missing less than two hours before she was scheduled to anchor the morning news one day in 1995.

When Jodi Huisentruit didn’t show up for work as a morning anchor at KIMT-TV on June 27, 1995, her producer didn’t worry. She called Huisentruit, who answered, apologized, and said she was running late. But Jodi Huisentruit never came in.

Before long, it became clear that something horrible had happened to the 27-year-old as she rushed out of her apartment. Police, asked by KIMT-TV to conduct a welfare check, found Huisentruit’s belongings scattered around her Mazda Miata in the parking lot of her apartment building. 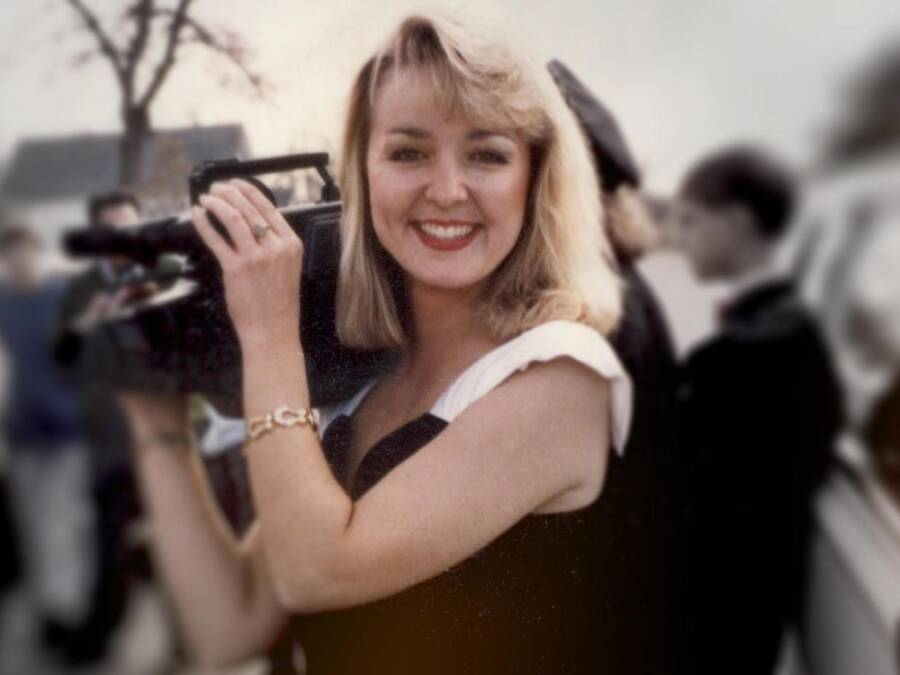 It was the beginning of a mystery that has endured until this day. What happened to Jodi Huisentruit? Was she abducted by a stalker? A local rapist? Or even by a friend who may have become obsessed with her?

This is the full story behind the disappearance of Jodi Huisentruit, the morning news anchor whose fate has remained uncertain for more than two decades.

Born on June 5, 1968, Jodi Sue Huisentruit grew up in Long Prairie, Minnesota, where she played on her high school golf team and aspired to become a news anchor.

In pursuit of that goal, Huisentruit attended St. Cloud State University, where she worked for the school’s TV station. She worked for several other television stations upon graduation before she found a job as a morning anchor at KIMT-TV in Mason City, Iowa, just four hours from where she’d grown up.

She seemed to settle quickly into her new job and new city. Her colleagues remembered Huisentruit as “bubbly” and “effervescent,” despite the early hours she worked. And Huisentruit made a group of new friends that included an older man named John Vansice.

In the days leading up to Jodi Huisentruit’s disappearance, everything seemed normal. She went on a waterskiing trip to Iowa City with a group of friends that included Vansice. And the night before she disappeared, she briefly stopped by Vansice’s house to watch a videotape from her surprise birthday party earlier that month.

But on June 27, 1995, Jodi Huisentruit never showed up for her morning shift at KIMT-TV.

Normally, Jodi Huisentruit arrived at work at 3 a.m. so that she could anchor the 6 a.m. KIMT-TV morning show called DayBreak.

“I called her twice. I talked to her and woke her up that first time,” Kuns told FindJodi.com co-founder Josh Benson in 2011. “The second time, it just rang and rang… I had obviously woken her up. She asked what time it was. I told her. She said she’d be right in.”

But Jodi Huisentruit never showed up for work. Kuns, annoyed, ended up doing the broadcast herself. Then, thinking that Huisentruit may have fallen in the shower, she asked a co-worker to call the police and request a welfare check. 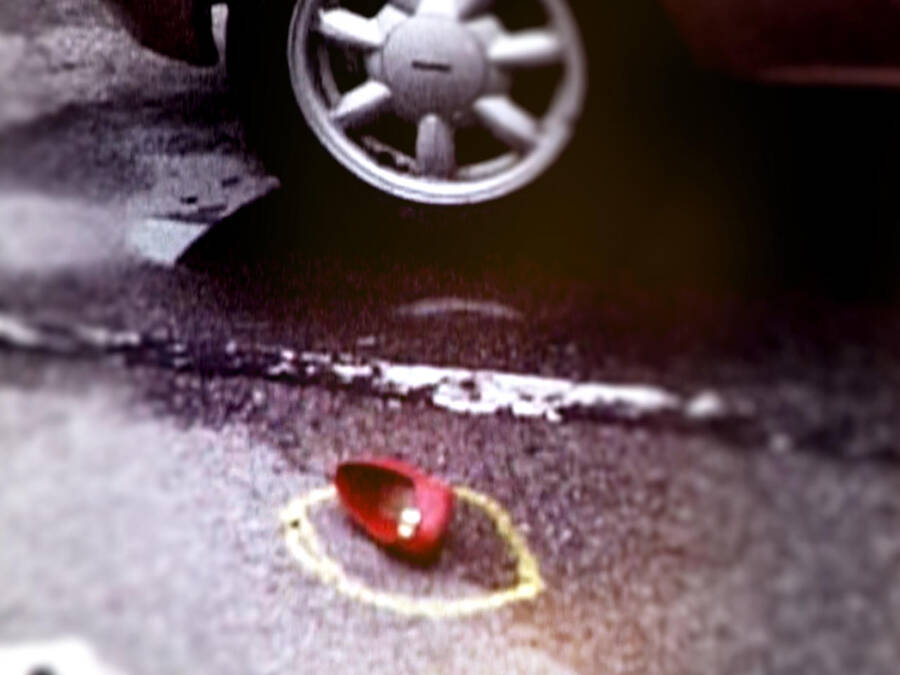 Mason City Police DepartmentJodi Huisentruit’s red high heels were found outside her apartment building on the day she disappeared.

When the police arrived at Huisentruit’s Mason City apartment around 7 a.m., however, they found evidence that something much worse had happened to Huisentruit. Her red Mazda Miata was still parked in front of the building, and police found her bent key on the ground nearby along with her red high heels, blow dryer, and earrings. There were drag marks on the wet pavement.

Some of Huisentruit’s neighbors also told police that they’d heard a scream around 4:30 a.m., and a man who lived nearby remembered seeing a light-colored van as he left for work. Because of the bent key, police suspected that someone had abducted the young news anchor as she was unlocking her car.

But aside from that hunch, investigators didn’t have much to go on. A search of the area around Huisentruit’s apartment turned up no new clues. However, police did find a palm print on her windshield and an errant strand of hair near her car.

“Unfortunately, in this case, there’s not a lot of evidence, period,” Lieutenant Ron Vande Weerd of the Mason City Police Department told FindJodi.com, before adding: “But we do have definite parts of the investigation, different things that we know, that we are withholding for just that reason, that if we are able to develop a subject, that we are able to eliminate him or corroborate with him.”

That said, a number of suspects in Jodi Huisentruit’s disappearance have emerged since she disappeared in 1995.

The Wide-Ranging Theories About The Young Anchor’s Disappearance

Police may not have found much evidence at Huisentruit’s apartment, but they have weighed different suspects over the years. One is John Vansice, Huisentruit’s friend and likely the last person to see her alive. 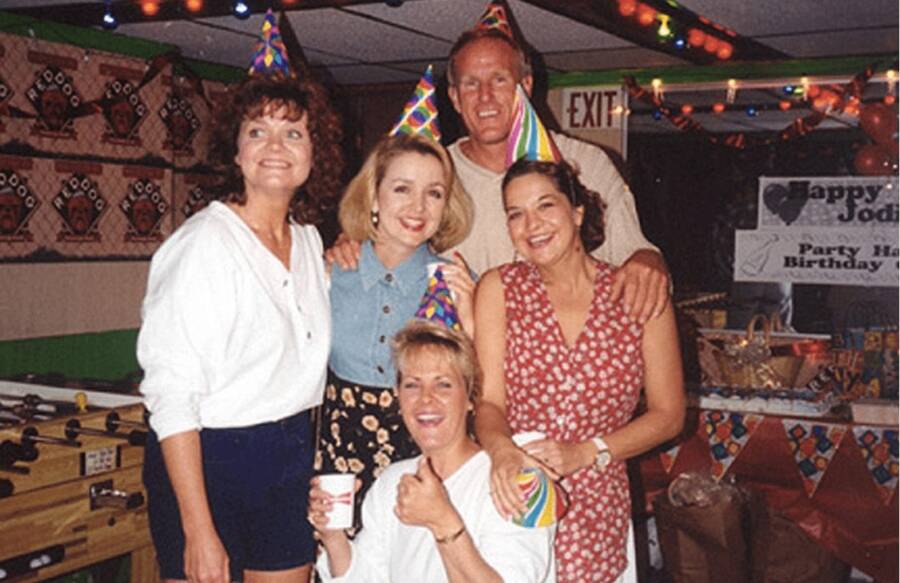 Ani KruseJohn Vansice with Jodi Huisentruit and some of her friends.

According to 48 Hours, Vansice first met Huisentruit and her friend, Ani Kruse, at a bar. Though he was 22 years older than them, they hit it off and became friends. However, some of Huisentruit’s friends suspected that he wanted something more. Vansice hosted Huisentruit’s 27th birthday party and even talked about naming his boat after her.

Indeed, Vansice has passed a polygraph test, provided his palm prints and DNA to a grand jury, and offered an alibi for his whereabouts on the morning Jodi Huisentruit disappeared. He’s since relocated to Arizona and refuses to talk about the case with the media.

So if Vansice didn’t abduct Jodi Huisentruit, then who did?

Another theory is that Huisentruit was abducted by someone who watched her on TV.

“Jodi would have been easy to stalk,” FindJodi.com notes. “Her home address, apartment unit and phone number were listed in the public Mason City phone directory… She also had the same work schedule every day and frequently talked about her social and community event plans when she was delivering the news.”

Indeed, Huisentruit even reported to police in October 1994 that someone driving a white truck had made her nervous. And she later told friends that she worried about being followed.

As such, two men who didn’t personally know Jodi Huisentruit have emerged as possible suspects.

One is Tony Jackson, a serial rapist who lived just two blocks from Huisentruit’s work at the time of her disappearance. In 1997, he was arrested and convicted of raping four women. While serving life in prison for his crimes, he allegedly told another prisoner that he’d killed Huisentruit.

Jackson purportedly rapped: “She’s a-stiffin’ around Tiffin in pileage of silage in a bylow, low below…” which led police to search silos in Tiffin, Iowa, two hours away from Mason City.

They didn’t find anything, however, and in 1999 the Mason City Police Department stated that Jackson was not considered a suspect. Jackson, for his part, has also insisted on his innocence.

Another suspect was Jerry Burns. In 2018, DNA connected him to the murder of 18-year-old Michelle Martinko, a young, blond woman killed in Iowa in 1979. Not only did Martinko and Huisentruit resemble each other, but, according to CBS News, Burns even brought up Huisentruit’s name during his interrogation.

Other theories about Jodi Huisentruit’s disappearance suggest more of a conspiracy at play. One proposes that she was killed for investigating the death of Billy Pruin, a farmer shot at his Mason City home after complaining about local methamphetamine rings. 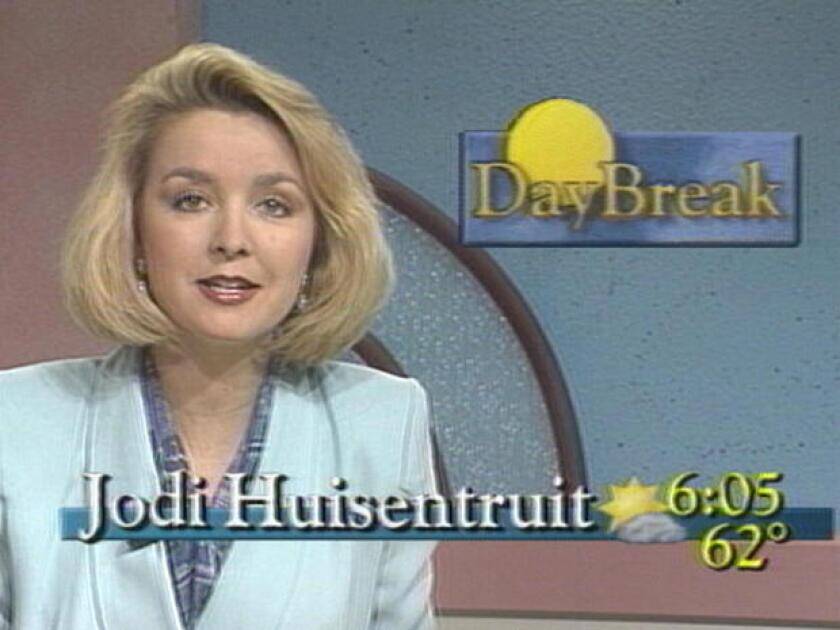 KIMT-TVJodi Huisentruit was the morning anchor for a KIMT-TV show called DayBreak when she vanished.

Another suggests that someone within the Mason City Police Department killed her. According to AETV, Mason City Police Officer Maria Ohl claimed that an informant told her that the police were involved in Huisentruit’s abduction.

Indeed, when FindJodi.com financed four billboards to raise awareness about her case, one of them was vandalized with the name of Frank Stearns, a retired Mason City Police Department investigator, and the words “machine shed.” Police never found out who vandalized it and concluded it was done by someone with their “own agenda.”

Today, Jodi Huisentruit’s disappearance remains a mystery. But though the 27-year-old was declared legally dead in 2001, her case remains open.

“We have never closed the case,” Mason City Police Chief Jeff Brinkley told CBS News. “It’s never been a cold case for us. It’s been an active investigation since it happened.”

As the billboards financed by FindJodi.com said, “Someone knows something… is it YOU?” Any information about Jodi Huisentruit’s disappearance should be reported to the Mason City Police Department, the Iowa Department of Criminal Investigation, or the FBI.

After reading about Jodi Huisentruit’s disappearance, see how Amy Lynn Bradley disappeared while on a cruise with her family. Or, go inside the story of Brian Shaffer, the medical student who vanished from an Ohio bar.