The Bloody Story Of The Real-Life Peaky Blinders

The inspiration behind Netflix's Peaky Blinders, this gang of disenfranchised Irish men terrorized Birmingham’s streets with petty crime and thievery. 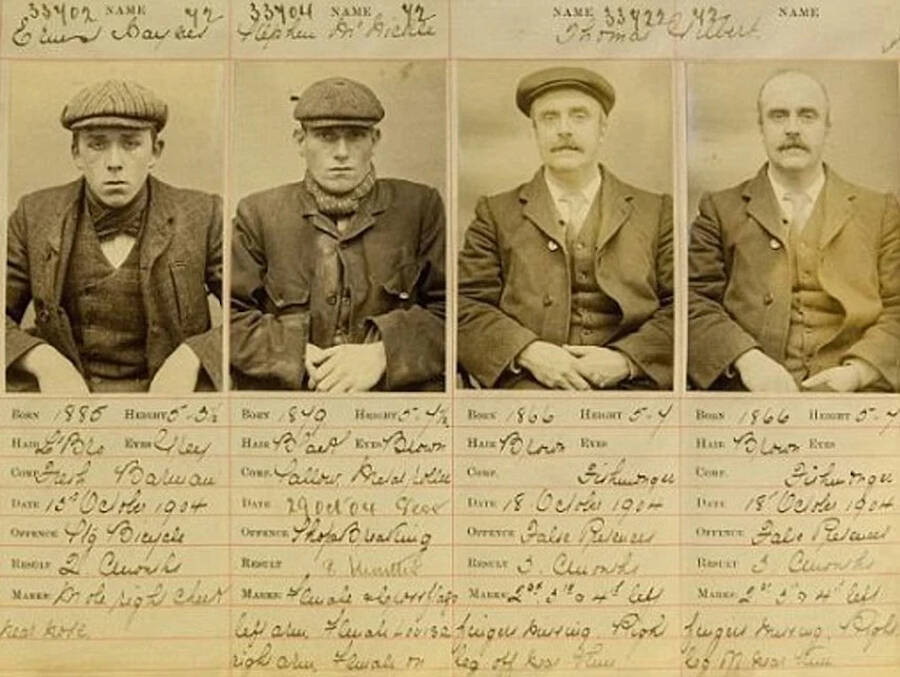 When Peaky Blinders premiered in 2013, viewers were enraptured. The BBC crime drama chronicled a titular street gang in the shadow of World War I and transported viewers to the smog and crime-riddled alleyways of Birmingham, England. It left staggered audiences wondering: “Is Peaky Blinders based on a true story?”

While creator Steven Knight admitted that the Shelby clan of protagonists was fictional, the Peaky Blinders were indeed a real gang that ruthlessly vied for control of Birmingham’s streets from the 1880s to 1910s. They had no qualms about their methods — from extortion, robbery and smuggling, to murder, fraud, and assault.

The Peaky Blinders visually distinguished themselves by wearing tailored jackets, lapeled overcoats, and peaked flat caps. While the show claims they stashed razor blades in their caps to head-butt and blind their rivals with, scholars believe the “Blinder” part of their name simply described somebody well-dressed, and “Peaky” merely denoted their hats.

The Shelby family never existed, however. The real Peaky Blinders weren’t related but instead were composed of several different gangs. While Knight took vast creative liberties, his portrait of life in Victorian England and industrial cities at the turn of the century was harrowingly accurate — and the Peaky Blinders were once a real threat.

The Story Of The Real Peaky Blinders

Unlike the fictional Thomas Shelby and his affluent relatives and cohorts, the real Peaky Blinders were impoverished, unrelated, and much younger. Born out of economic hardship in lower-class Britain, this roving band of uniformed thieves began pickpocketing locals and extorting business owners in the 1880s. 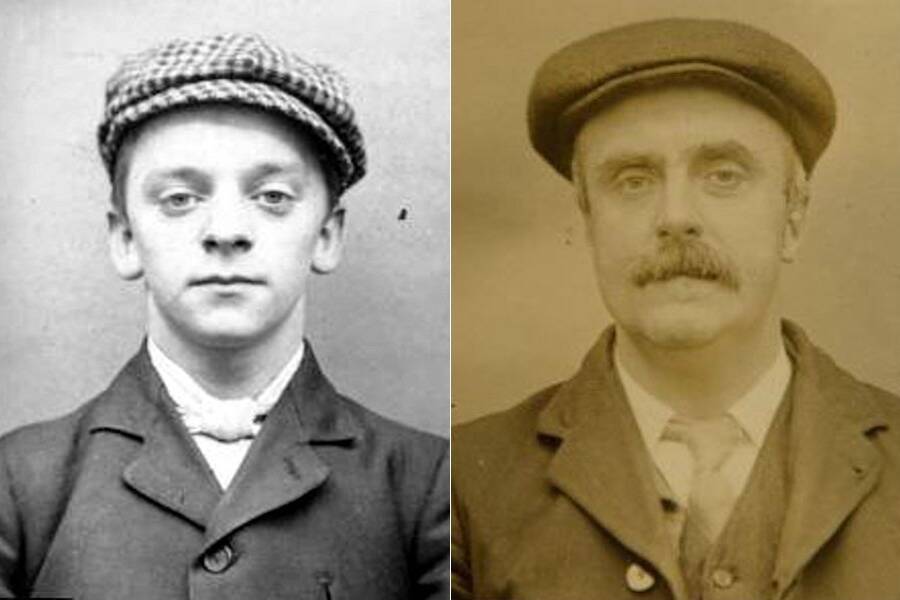 The Peaky Blinders came from a long line of gangs, however. The Great Famine of 1845 saw Birmingham’s Irish population almost double by 1851, and the gangs arose in response to anti-Irish and anti-Catholic sentiments that made them second-class citizens relegated to inner-city areas where water, drainage, and sanitation were terribly lacking.

Relentless hate speech only made matters worse as protestant preachers like William Murphy told their flock that the Irish were cannibals whose religious leaders were pickpockets and liars. In June 1867, 100,000 people took to the streets to destroy Irish homes. The police didn’t care — and sided with the aggressors.

The Irish formed “slogging” gangs to defend themselves as a result and began frequently retaliating against police who raided their gambling operations. By the 1880s or 1890s, however, those slogging gangs were subsumed by younger generations in the form of the Peaky Blinders — who thrived until the 1910s or 1920s.

Typically between 12 and 30 years old, the gang became a serious problem to Birmingham law enforcement. 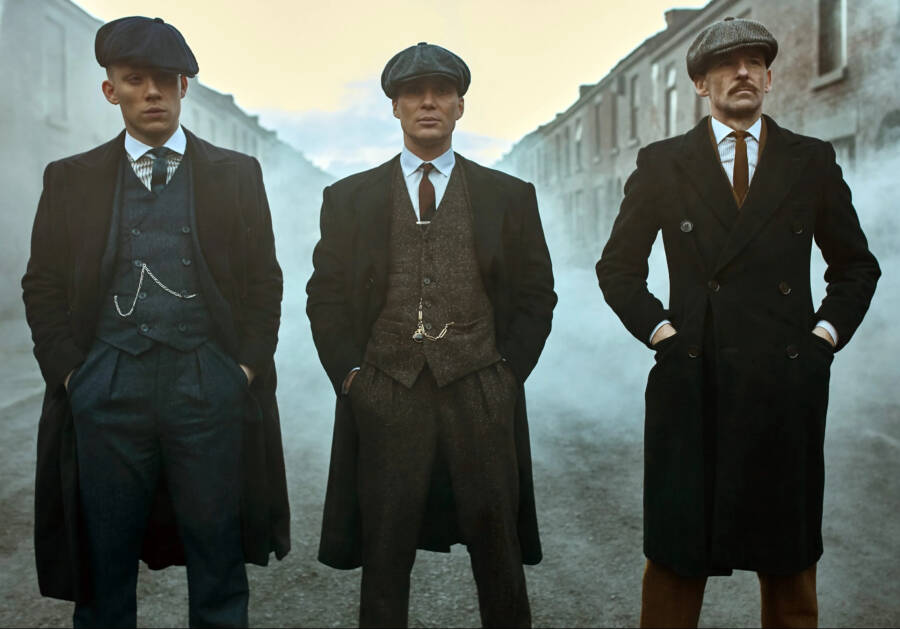 “They would target anybody who looked vulnerable, or who did not look strong or fit,” said David Cross, the curator of the West Midlands Police Museum. “Anything that could be taken, they would take it.”

The Rise And Fall Of The Irish Gang

The real Peaky Blinders were far less organized than the eponymous television show suggests. Historians remain uncertain as to who officially founded the gang, but some believe it was either Thomas Mucklow or Thomas Gilbert, the latter of whom routinely changed his name.

On July 19, 1897, for instance, constable George Snipe encountered six or seven Peaky Blinders on Bridge West Street. The gang had been drinking all day and erupted when Snipe tried to arrest 23-year-old member William Colerain for using obscene language. The Blinders consequently fractured Snipe’s skull with a brick, killing him. 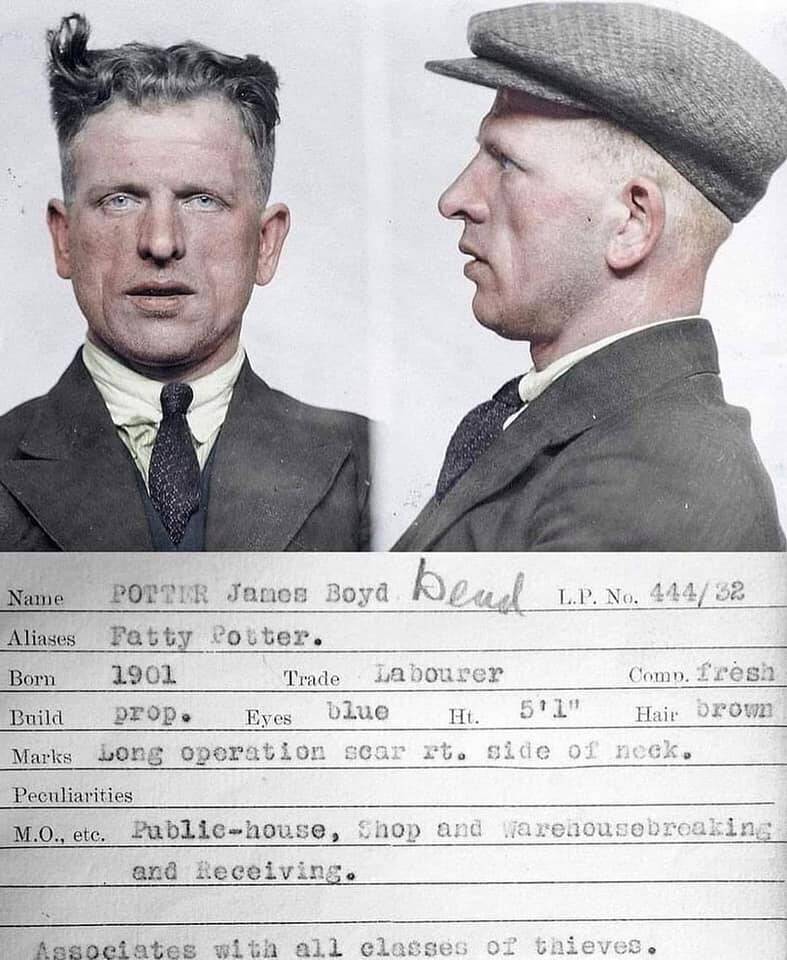 My Colorful PastA colorized mugshot of a real Peaky Blinder named James Potter who was known for breaking into pubs, shops and warehouses.

Other prominent members like Harry Fowler, Ernest Bayles, and Stephen McHickie were a common sight in local jails. While their offenses were usually minor and centered on bicycle thefts, the Peaky Blinders didn’t shy away from murder — and killed constable Charles Philip Gunter four years after Snipe.

“Surely all respectable and law-abiding citizens are sick of the very name of ruffianism in Birmingham and assaults on police,” the letter read. “No matter what part of the city one walks, gangs of ‘peaky blinders’ are to be seen, who ofttimes think nothing of grossly insulting passers by, be it a man, woman, or child.”

Is Peaky Blinders Based On A True Story?

The Peaky Blinders fizzled in the early 1900s after trying to force themselves into the horse-racing business and the then-leader of the Birmingham Boys drove them out of town. By the 1920s, the stylish gang of criminals had disappeared — and their name became synonymous with British gangsters of all sorts.

“They have been described as the first modern youth cult and I think that really makes sense,” said Andrew Davies of the University of Liverpool. “Their clothing, their sense of style, their own language, they really do look like the full forerunners of the 20th century youth cults like punk.”

So is Peaky Blinders based on a true story? Only loosely. Thomas Shelby as portrayed by Cillian Murphy, as well as his family and various cohorts, were created for entertainment’s sake. On the other hand, the fact that various characters were World War I veterans with post-traumatic stress disorder was certainly accurate.

A Birmingham native, Knight was ultimately more interested in the history of his own family. His own uncle had been a Peaky Blinder and served as the creative basis for the BAFTA Award-winning portrayal of Thomas Shelby. Inspired by those stories, Knight was disinterested in letting the truth get in the way of a good story.

“One of the stories that really made me want to write Peaky Blinders is one my dad told me,” he said. “His dad gave him a message and said, ‘Go and deliver this to your uncles’ … My dad knocked on the door and there was a table with about eight men, immaculately dressed, wearing caps and with guns in their pockets.”

He continued, “The table was covered with money. Just that image — smoke, booze and these immaculately dressed men in this slum in Birmingham — I thought, that’s the mythology, that’s the story, and that’s the first image I started to work with.”

After learning about the real Peaky Blinders and the true story of “Peaky Blinders,” check out 37 photos of the New York gangs that terrorized the city. Then, take a look at these Bloods gang photos.