Built in 1845, the John Lawson House in Wappingers Falls, New York was once a creepy tourist attraction due to the mysterious mannequins that inhabited its porch. 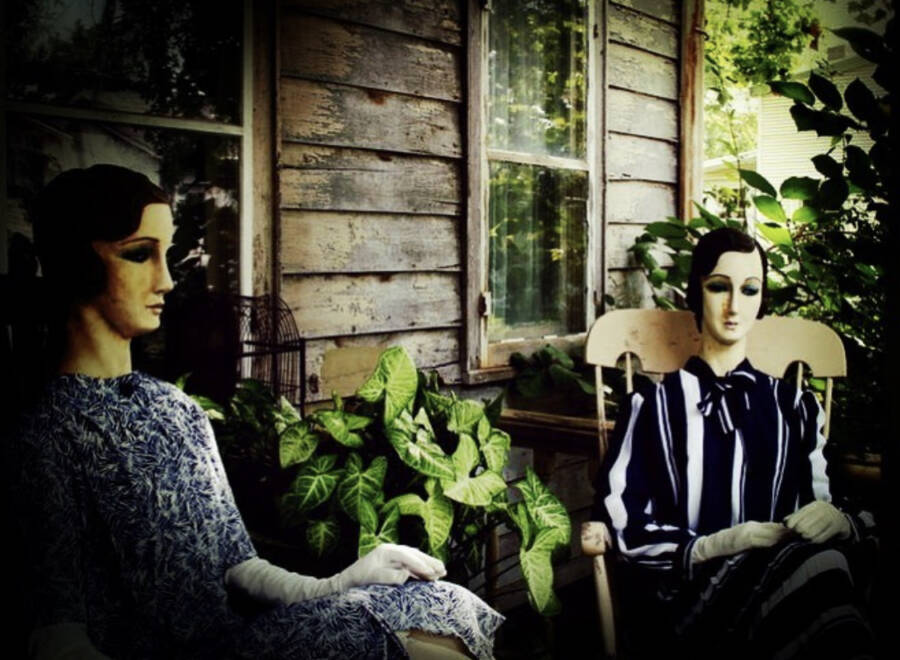 theconfessionalpodcast/InstagramTwo mannequins on the porch of the John Lawson House dressed in outfits and wearing wigs.

Some 80 miles north of New York City sits the John Lawson House, a peculiar home over 150 years old in the quaint village of New Hamburg. Known for life-sized mannequins that would mysteriously appear on the front porch, the house is also subject to rumors that the figurines are haunted by spirits from tragic events of the 19th century that took place nearby.

For roughly a decade, bizarre sightings of the mannequins were documented, with photographs of them wearing wigs and period outfits. Local lore holds that they would even change body posture, as well as their clothes and hairstyles. Odder still, no one has been seen adjusting the mannequins.

Is the mystery of the John Lawson house just a local legend? Or was something supernatural afoot?

John Lawson’s Home By The Hudson

The Lawson family has deep roots in the town of New Hamburg, which became a busy river port in the mid-1800s as the entire Hudson River Valley area boomed with economic activity. Wealthy New York City dwellers began moving up north along the river to build their summer homes, bolstering local businesses.

John Lawson, a descendant of one of the region’s first white colonist families, built a home in New Hamburg’s Main Street Historic District in 1845.

One of the town’s oldest remaining residences today, it was described as a “center-hall house with central cross-gable, bracketed cornice, corbelled chimneys and arched top windows” in its nomination to the National Register of Historic Places in 1987. 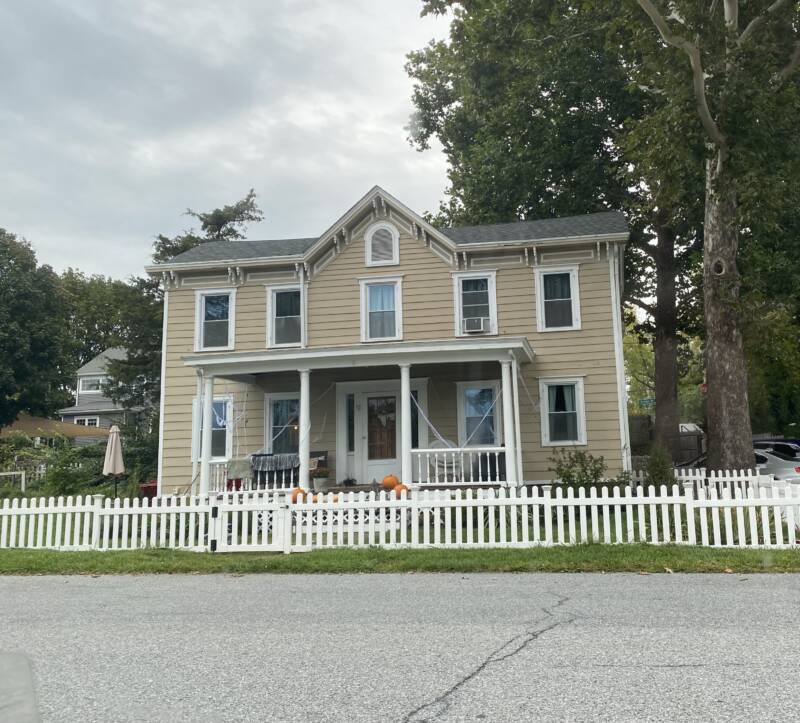 Julia MarninThe John Lawson House, seen in October 2021, without the infamous mannequins on the front porch.

Shortly after the construction of the John Lawson House, the New Hamburg railroad station opened nearby — and about 20 years later would be the site of a horrific accident.

Two separate tragedies separated by six years struck near the John Lawson House in the 1870s.

During the cold winter evening of Feb. 6, 1871, a 25-car freight train carrying oil traveled from the Albany area southbound toward New Hamburg on the Hudson River Railroad line.

After the freight train passed under a tunnel near New Hamburg, a station switchman noticed a broken axle causing sparks to fly out under an oil car in the middle. Eventually, the axle disengaged, resulting in the car derailing and flipping over onto the northbound track as the passenger train approached.

The freight train’s engineer managed to stop it and ran across the tracks with a flagman, holding red lights to warn the passenger train — but it was too late.

The passenger train’s engineer saw the warning lights and attempted to reverse, but ultimately couldn’t slow down quickly enough. It slammed into the damaged tank car containing the oil, causing a fiery explosion about 200 feet away from the John Lawson house.

Some survivors were pulled from the wreckage, but 22 people lost their lives.

Then, six years later, a major fire ignited in the village by the riverside around 9 p.m. on May 3, 1877 destroying seven structures surrounding the John Lawson House.

Resident Frank Luyster discovered a fire in an alleyway between the Madison House and a store owned by Frank Myers, according to a contemporaneous account.

“Luyster tried in vain to stamp out the fire which had by then spread to the store. The kerosene room caught fire. Suddenly there was a violent explosion! Uncontrollable flames raced throughout the building. A general alarm was sounded,” the account detailed.

The townspeople brought buckets of water to douse the flames, but they only spread further. A rider was sent on horseback to fetch the fire department in the nearby village of Wappingers Falls, two miles away. Meanwhile, the fire began consuming structures.

“By 9:45 PM, all were beyond saving,” states the account. “The area continued to smoulder throughout the night.” Myers believed the fire originated in his store while others believed it may have been sparked by an arsonist. 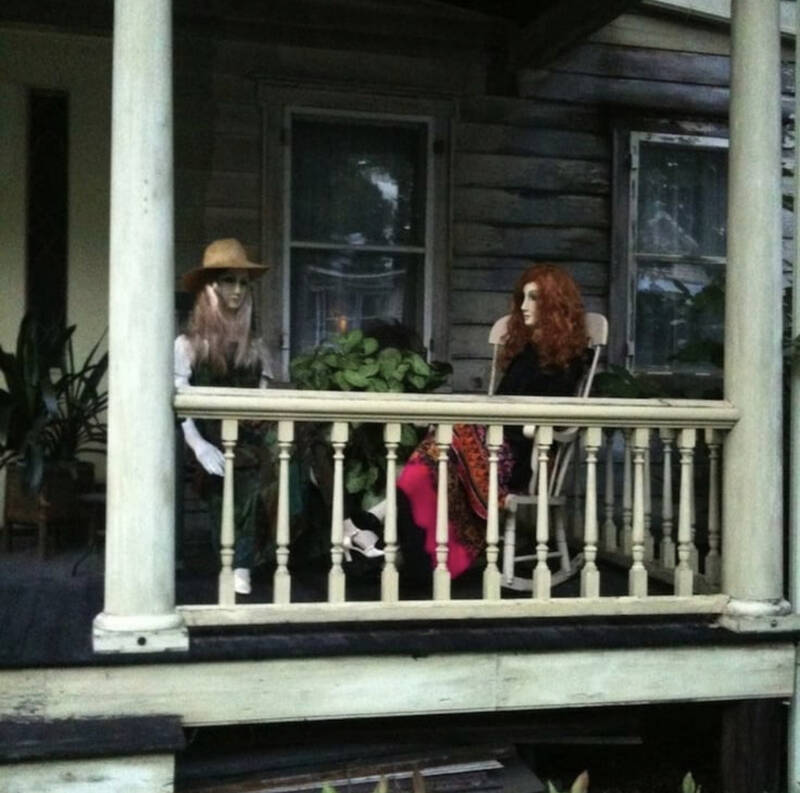 When the mannequins began appearing on the John Lawson House’s front porch, it was unknown who owned the home.

The life-sized, doll-like figures were rumored to change positions by the day, and rumors circulated that they sometimes faced the direction of the 1871 train accident.

The mannequins were even rumored to be possessed by spirits of the dead, particularly from the train accident and the destructive fire in 1877. To make matters eerier, they would appear wearing vintage-style clothing and with accessories such as hats and long white gloves.

Sometimes, they were posed holding certain items, including books and an empty bird cage. During bad weather, the mannequins would disappear for a short time before reemerging.

Then, one day in 2016, the mannequins at 9A Main Street simply disappeared.

To this day, no one knows for sure why the mannequins sat out on the front porch or why their appearances would change — or if they will ever return to the front porch of the John Lawson House.

After reading about the eerie John Lawson House, learn the true story behind the terrifying witch from The Conjuring, Bathsheba Sherman. Then, explore the real haunted houses of America.

Julia Marnin
Julia Marnin is a writer and journalist based in New York state who’s written for Newsweek, USA Today, Philadelphia Style magazine, and more. Her work has also been republished by outlets such as The Associated Press, where she has reported on election night votes for Super Tuesday and the presidential election in 2020. She earned a bachelor’s degree from The College of New Jersey and is interested in writing about a range of topics including history, World War II, true crime, human rights, and more.
You might also like
Remove Ads
×
Follow hu On