On April Fools’ Day 1957, BBC viewers watched a program about a "spaghetti tree" in Switzerland, and many were so convinced it was real that they wanted to grow their own. 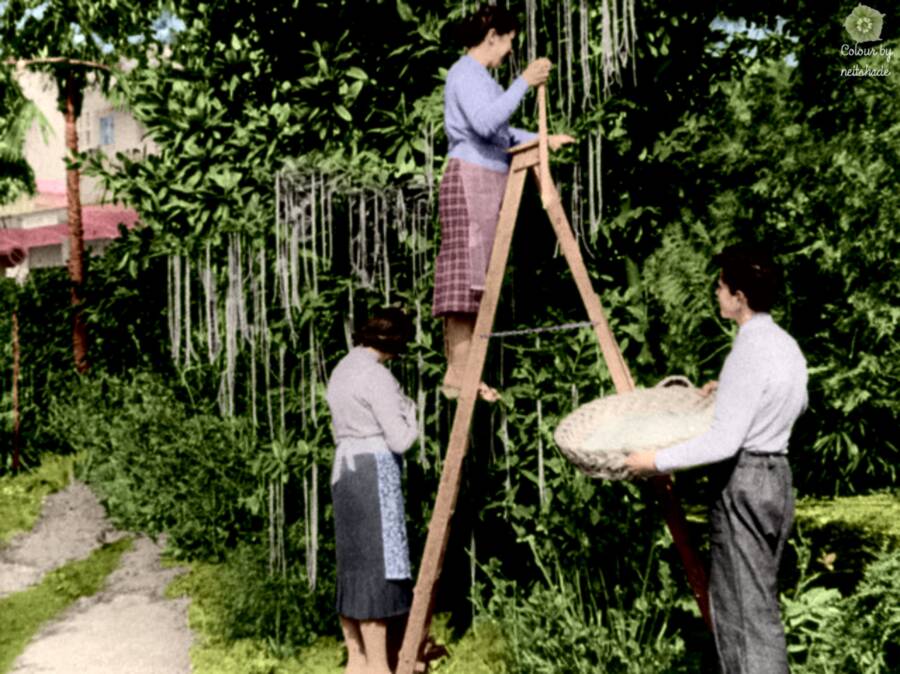 In 1957, the BBC pulled off what is arguably one of the greatest April Fools’ joke of all time. The “spaghetti tree” hoax was so good and so believable, in fact, that even BBC staff members were convinced, and had to research the topic to confirm that it was a hoax.

On April 1, 1957, BBC’s broadcasting network aired a three-minute video segment, which showed farmers “harvesting” a rare delicacy from a grove of trees: spaghetti. Remarkably, the segment was so believable that hundreds of viewers called in demanding to know how to grow their own “spaghetti trees.”

BBC Viewers Are Astounded By The ‘Spaghetti Tree’ Of Switzerland

The legendary hoax short featured groups of farmers, working in pairs, removing spaghetti noodles from branches, and lying them out in the sun in large baskets to dry. You can watch it here, via the BBC.

Adding believability to the hoax segment was the announcer, Richard Dimbleby. A veteran broadcaster, Dimbleby was the BBC’s first war correspondent and not at all known for silliness. In a perfect deadpan, Dimbleby noted that the spaghetti harvest in Switzerland would be particularly bountiful that year, thanks to the almost complete eradication of the spaghetti tree’s main predator, the “spaghetti weevil.”

“Many people are often puzzled by the fact that spaghetti is produced at such uniform length,” Dimbleby intoned over footage of happy Swiss women pulling strands of pasta from tree branches. “This is the product of many years of patient endeavor by plant breeders who succeed in producing the perfect spaghetti.”

Despite the location of the “farm” — Switzerland, rather than pasta’s native Italy — and the release of the segment on April Fools Day, hundreds of people believed spaghetti trees were real. Even Sir Ian Jacob, the General Director of the BBC at the time, one of the most senior executives, was fooled into believing, even if just for a moment. Jacob reportedly had to research spaghetti in three separate books to confirm that the segment was pulling his leg.

Why The ‘Spaghetti Tree’ Hoax Worked

After the segment aired, hundreds of people called into the BBC, expressing awe at the video, and wondering how they could get their very own spaghetti tree, to grow their own noodles at home. Keeping with the joke, the BBC’s official response was to “place a sprig of spaghetti in a tin of tomato sauce and hope for the best.”

To play devil’s advocate for all of those poor, unsuspecting British viewers, it’s worth noting that spaghetti — and pasta in general — didn’t become popular in the United Kingdom until later in the 20th century. Most who ate spaghetti there bought it in a tin from a store. Because of that, not much was known about the productions or origin, resulting in a great many viewers being duped by the segment.

Eventually, the BBC admitted that the video was a prank, disappointing viewers everywhere.

The ‘Spaghetti Tree’ Was Not The Only Successful BBC Hoax

The “spaghetti tree” segment was one of the BBC’s first times having a laugh at the expense of its viewers — but it was far from the last.

Less than 10 years later, on April Fools’ Day 1964, the network would air an interview with the inventor of “Smellovision” — who convinced many viewers that he had invented a way to transmit smells over television signals. Remarkably, some viewers called in to confirm that they had smelled onions and coffee right through the television sets, according to The Times.

And on Halloween night 1992, the BBC would air a fictional documentary called Ghostwatch that was so convincing in its depiction of a team of journalists being haunted and attacked by a vicious ghost that it reportedly caused some viewers PTSD.

Ultimately, the “spaghetti tree” is the most iconic of the BBC’s hoax programs, still referenced in lists of some of the greatest in history.

According to the Museum of Hoaxes, the idea for the segment came from cameraman Charles de Jaeger, a Vienna native. Apparently, while he was in school, his teacher once told his class that they were “so stupid they would believe him if he told them spaghetti grew on trees.”

Apparently, the teacher was right.

Next, check out some of the greatest hoaxes of all time. Then, check out these famously faked photos.