Johnny Gosch disappeared while delivering newspapers in his West Des Moines neighborhood when he was 12 years old, but his mother claims he visited her late one night in 1997 to tell her he'd been the victim of a pedophile ring.

On Sept. 5, 1982, 12-year-old Johnny Gosch woke up early to deliver newspapers in his West Des Moines, Iowa neighborhood. His fellow paperboys spotted him at around 6 a.m. with his wagon full of deliveries not far from his house — but Gosch never made it home. 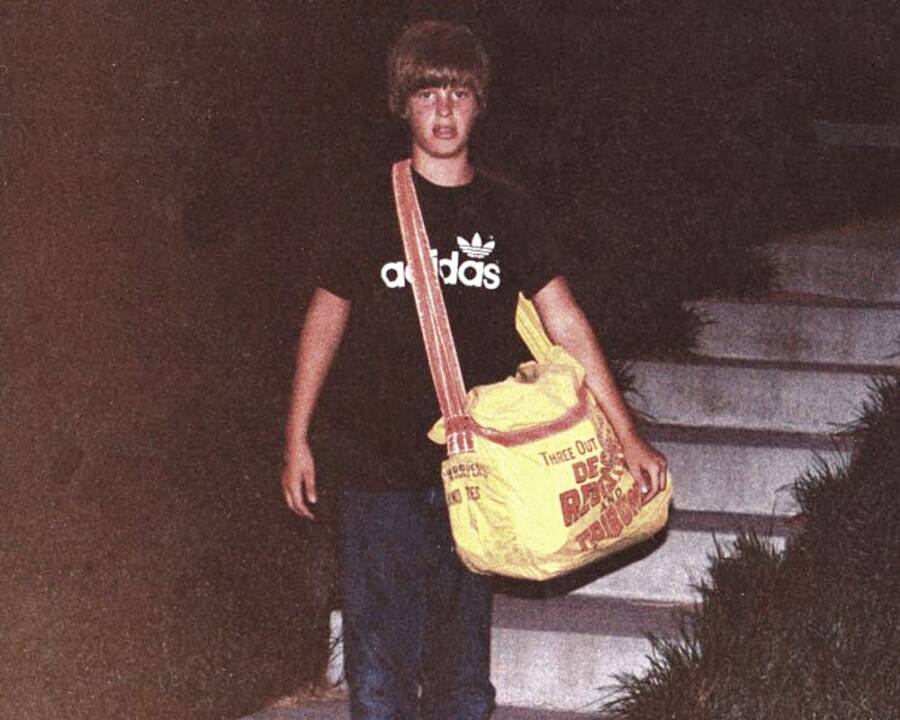 Twitter/WHO 13 NewsJohnny Gosch with his newspaper bag shortly before his disappearance.

The only sign of the young boy was his little red wagon. A few witnesses said they’d seen him giving directions to a strange man in a blue car, but police initially assumed he’d simply run away, which gave his kidnapper plenty of time to escape.

Even once the search for Gosch began in earnest, though, there were no real clues to follow. So when another boy disappeared under eerily similar circumstances two years later, a fellow Des Moines resident had the bright idea to print both the boys’ photos on milk cartons from a local dairy. This soon sparked the campaign to feature information about missing children on milk cartons across the country.

In the 40 years since Gosch’s disappearance, numerous people around the United States have reported sightings of him. Even his own mother says he showed up at her house one night in March 1997 to let her know he was alive. However, despite these claims, Johnny Gosch remains missing to this day.

On Sept. 5, 1982, Johnny Gosch woke up before sunrise and left the house with his dachshund, Gretchen, to deliver newspapers in West Des Moines, Iowa. According to Iowa Cold Cases, his father usually went with him, but John David Gosch had decided to stay home that fateful Sunday morning.

Around 7:45 a.m., the Gosch household received a phone call from a disgruntled neighbor wondering why his newspaper hadn’t been delivered yet. This was odd, as young Gosch should have been done with his route by then. The dog had come home — but Gosch had not. 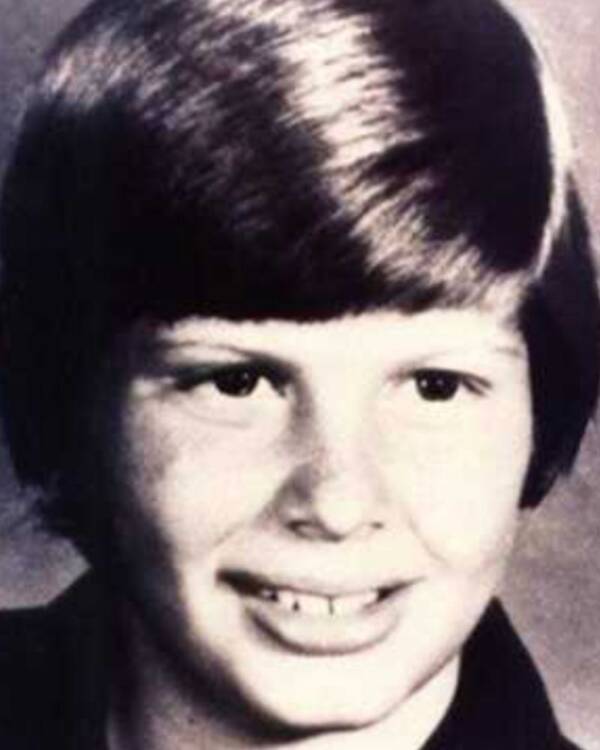 National Center for Missing and Exploited ChildrenJohnny Gosch was just 12 years old when he disappeared on Sept. 5, 1982.

John Gosch quickly started searching the neighborhood for his son. According to Slate, John later told The Des Moines Register, “We went searching and found his little red wagon. Every single [newspaper] was in his wagon.”

John and his wife, Noreen, frantically alerted the local police. However, since there had been no note or demand for ransom, the police assumed Johnny Gosch had run away, and the law said they could wait 72 hours to declare him missing and begin searching for him. But Gosch’s parents knew something was terribly wrong.

When police finally began looking for answers about Johnny Gosch’s disappearance, a chilling timeline of events began to form. Other paperboys who had been working with Gosch that morning said they’d seen him talking to a man in a blue Ford Fairmont around 6 a.m.

According to Iowa Cold Cases, Noreen later detailed what she’d heard from witnesses about the incident: “The guy shut off his engine, opened the passenger door, and swung his feet out on the curb right where the boys were assembling their newspapers.”

She said the man asked her son for directions, and young Gosch started walking away after talking to him.

Noreen continued, “The man pulled the door shut and started up the engine, but before he left he reached up and flicked the dome light three times.” She believes he was signaling to another man, who then came out from between two houses and began following Gosch. 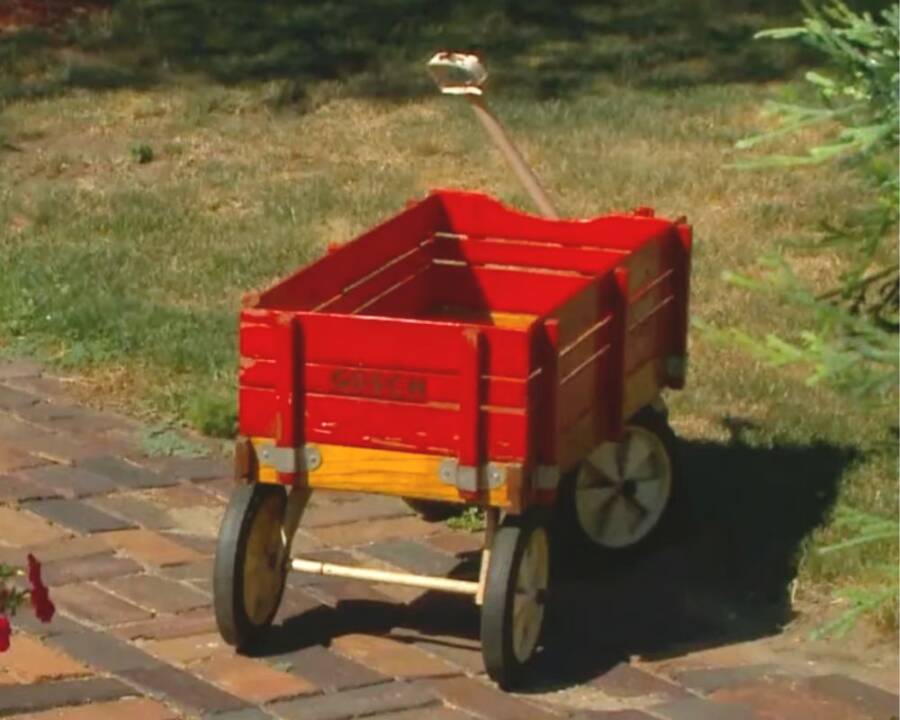 YouTubeThis red wagon is the only trace of Johnny Gosch that has ever been found.

The story varies, however, and nobody could recall many details about the man or his car, so police had few clues to follow. Frustrated with law enforcement’s response, Gosch’s parents began taking matters into their own hands.

John and Noreen Gosch made television appearances and distributed over 10,000 posters printed with their son’s picture. And two years later, when a 13-year-old boy named Eugene Martin vanished while delivering newspapers just 12 miles from where Johnny Gosch was last seen, Gosch’s story spread even farther.

One of Martin’s relatives worked for the local Anderson & Erickson Dairy, and they asked the company if they could print the photos of Martin, Gosch, and other missing children from the area on their milk cartons. The dairy agreed, and the idea soon spread nationwide.

The Gosches’ massive efforts to find their son ensured that word of his abduction spread far and wide, and before long, people were calling police to report sightings of the young boy.

Alleged Sightings Of Johnny Gosch Over The Years

For years after Johnny Gosch’s disappearance, people from across the country claimed to have seen him in various places.

In 1983, according to OurQuadCities, a woman in Tulsa, Oklahoma said Gosch ran up to her in public and said, “Please, lady, help me! My name is John David Gosch.” Before she could react, two men dragged the boy away.

Two years later, in July 1985, a woman in Sioux City, Iowa, received a dollar bill along with her change while paying at a grocery store. Written on the bill was a short note: “I am alive.” Johnny Gosch’s signature was scrawled beneath, and three separate handwriting analysts confirmed that it was genuine. 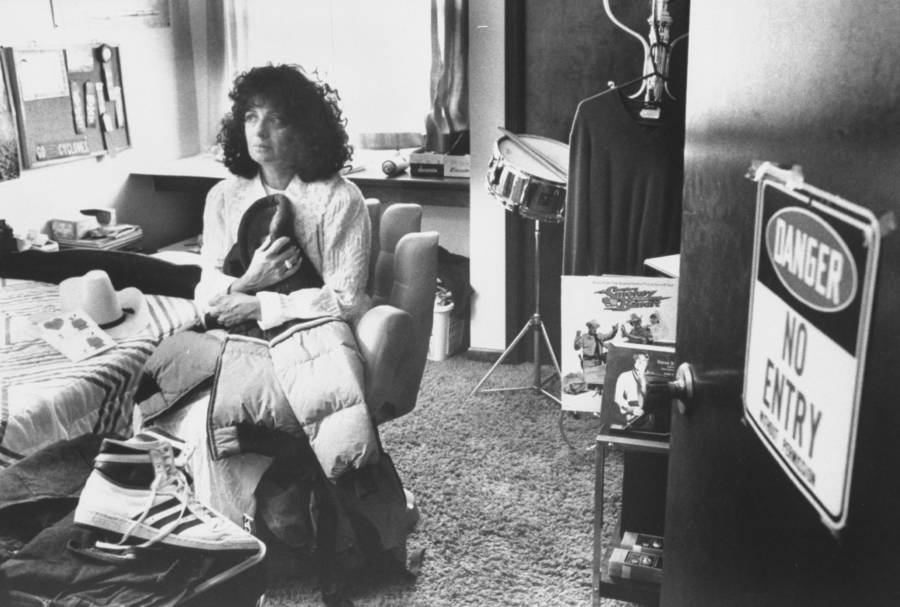 But it wasn’t only strangers who claimed to have seen Gosch — even Noreen herself said he showed up at her house one night 15 years after his disappearance.

In March 1997, Noreen Gosch awoke to a knock on her door at 2:30 a.m. She opened the door to see a strange man standing with then-27-year-old Johnny Gosch. Noreen claims her son opened his shirt to reveal a unique birthmark, then came in and spoke with her for over an hour.

She later told The Des Moines Register, “He was with another man, but I have no idea who the person was. Johnny would look over to the other person for approval to speak. He didn’t say where he is living or where he was going.”

According to Noreen, Gosch told her not to inform the police because it would put both of their lives in danger. She says he was kidnapped and sold into a child sex trafficking ring, and a strange package that appeared outside her door nearly a decade later seemed to confirm her beliefs.

Though both police and the elder John Gosch — who divorced his wife in 1993 — doubt Noreen’s claims that Johnny Gosch visited her in 1997, a set of photographs that were sent to her in 2006 made them wonder if she’d been telling the truth after all.

That September, almost exactly 24 years after Gosch’s disappearance, Noreen found an envelope on her doorstep that contained three photos of several boys who were all tied up — and one of them looked just like Johnny Gosch.

Police were stunned and quickly looked into the source of the photos, but they determined they weren’t Gosch after all. They had reportedly been previously investigated in Florida and were found to be from a group of friends just messing around, but Noreen finds that hard to believe. 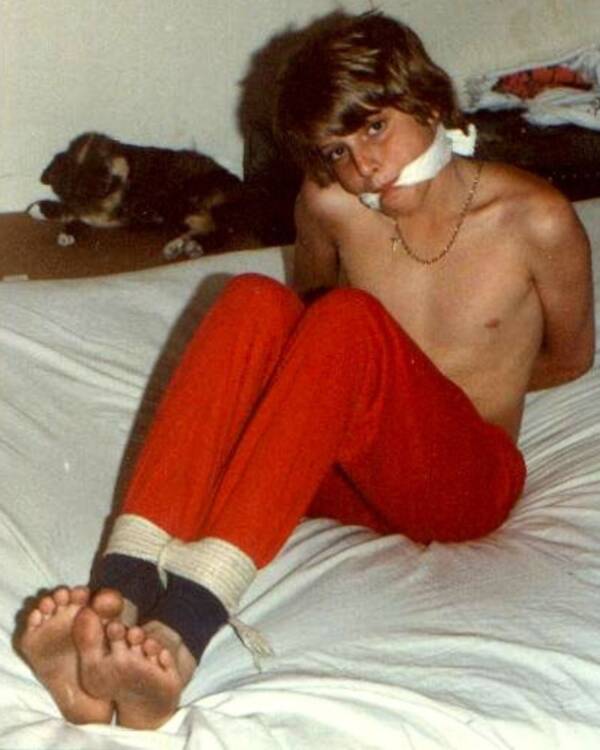 Public DomainNoreen Gosch is convinced this photo is of her son, Johnny Gosch.

She remains convinced that Johnny Gosch was forced into a pedophile ring, partially due to questionable information she’s received over the years. In 1985, a man from Michigan wrote to Noreen to say his motorcycle club had kidnapped Gosch to use as a child slave and requested a hefty ransom for the boy’s return.

And in 1989, a man named Paul Bonacci, who was in jail for sexually assaulting a child, told his attorney that he’d also been kidnapped into a sex ring and had been forced to abduct Gosch to force him into sex work as well. Noreen even spoke with Bonacci and said he knew things “he could only know from talking with her son,” but the FBI said his story wasn’t credible.

Though Noreen Gosch was often dismissed as a grieving mother driven to outlandish conclusions and stories after the disappearance of her son, her determination helped ensure that missing child cases were handled with greater urgency.

In 1984, Iowa passed the Johnny Gosch Bill, which required police to investigate missing child cases immediately, rather than waiting 72 hours. Although young Gosch has never been found, his legacy as one of the first milk carton children and as the impetus behind important legislation may have saved countless others from his fate.

After reading about the disappearance of Johnny Gosch, learn about Etan Patz, the first missing child to appear in a nationwide milk carton campaign. Then, discover the story of Jacob Wetterling, the 11-year-old boy whose body was found 27 years after he was kidnapped.