Inside The Blood-Soaked Story Of The Jolly Roger Pirate Flag

From 18th-century pirates like Blackbeard and Edward Low to the submarines and destroyers of World War II, the skull and crossbones pirate flag known as the Jolly Roger evolved countless times before becoming the version we know today. 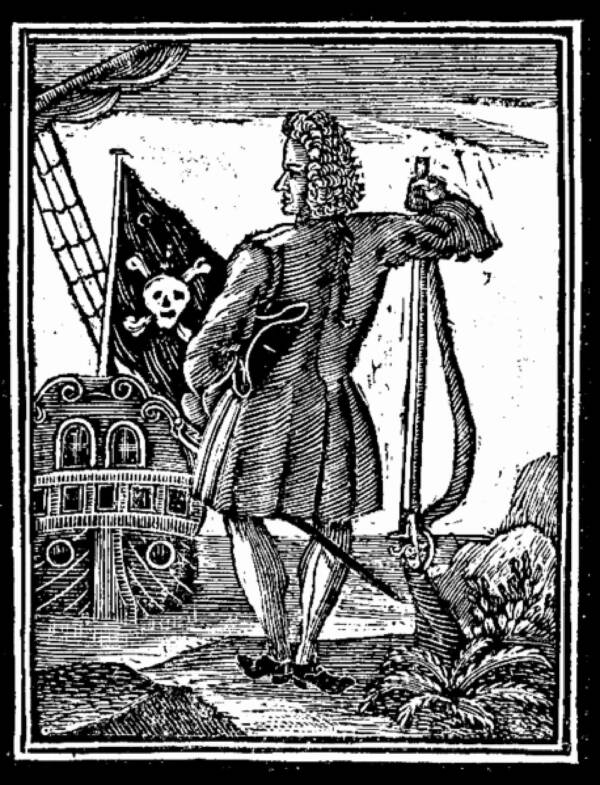 Library of CongressA depiction of a pirate with a Jolly Roger flag from circa 1725.

Today, one of the most enduring symbols of pirates is the Jolly Roger. The white skull on a black flag, grinning above crossbones, shines through the ages as a representation of the fear and death wrought by these marauders. But the history of this iconic flag is a complicated one.

For starters, pirates often added to the skull and crossbones motif. Some used other additional symbols like hourglasses, bleeding hearts, or swords. And though the Jolly Roger is a well-known image today, used even by the Royal Navy, no one is exactly sure where it originated.

This is the long history of the Jolly Roger, the flag used by pirates.

The Hazy Origins Of The Jolly Roger

The first iteration of the pirate flag as we know it today — black, with a white skull over crossed bones — was reported in the early 18th century. But the history of such flags is much older than that.

Indeed, flags long factored into pirates’ terror campaigns. The New York Times reports that 17th-century pirate William Kidd, a.k.a “Captain Kidd,” flew a French flag as he approached ships, then switched it a red flag. And this red flag, according to Scientific American meant surrender — or else.

As Scientific American explains, pirates would raise red flags to mean that they were prepared to fight to the death. But pirates would also sometimes raise a black flag, meaning they would provide quarter — or, take prisoners.

The name Jolly Roger may have come from this red flag practice. Portsmouth Historic Dockyard explains that some believe it came from the French joli rouge, which means “pretty red.” However, others have suggested that it comes from the English term “Old Roger,” which means “The Devil.”

Wherever it came from, the Jolly Roger flag quickly spread among pirates. But though the basics of the flag were the same for various pirates, they often used slightly different flags. 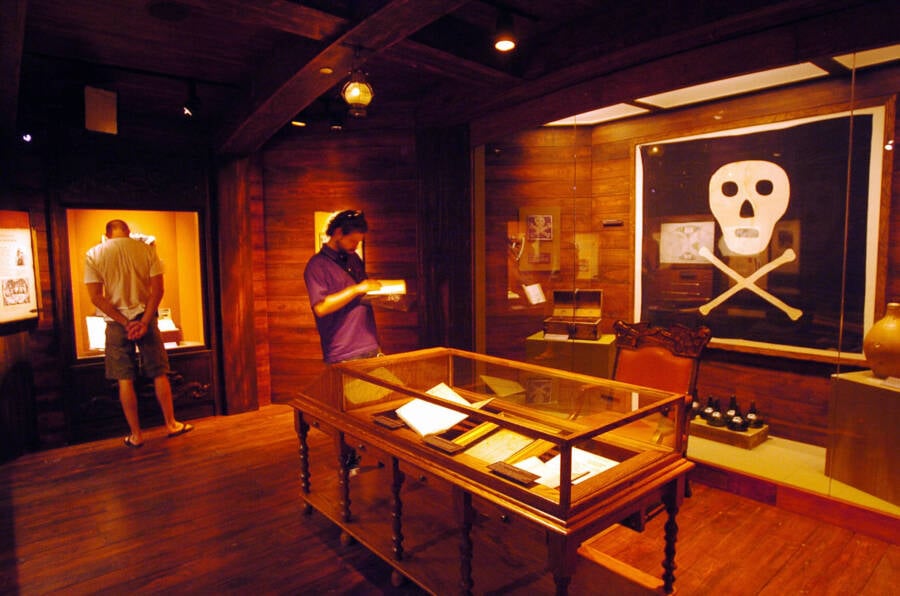 Regardless of its origins, the skull-and-bones Jolly Roger flag as we recognize it today started to be used at the beginning of the 18th century, during the so-called Golden Age of Piracy.

One of the earliest mentions of the flag came from 1700. Then, the British captain of the H.M.S. Poole described a flag flown by pirate Emanuel Wynn. That flag, the captain wrote after chasing Wynn, had “cross bones, a death’s head and an hour glass.”

Captain Charles Johnson’s 1724 account A General History of the Pyrates also describes such flags, and labels them as “Jolly Rogers.” Specifically, Johnson (who may have really been author Daniel Defoe) describes two pirates using the flag: Bartholomew Roberts and Francis Spriggs.

Johnson writes how Roberts, a Welsh pirate, hoisted a “Jolly Roger, (the Name they give their black Flag)” while intimidating a French vessel. And Johnson explains that the English pirate Spriggs and his crew made “a black Ensign … which they called Jolly Roger,” after he took command of his ship.

The writer also painted a colorful picture of Spriggs’ Jolly Roger, describing it as a black flag with “a white Skeliton in the Middle of it, with a Dart in one Hand striking a bleeding Heart, and in the other, an Hour-Glass.”

A 1723 account in the Weekly Journal or British Gazetteer describes a pirate flag in similar terms. They wrote that the pirate flag had: “the Portraiture of Death, with an Hour-Glass in one Hand, and a Dart in the other, striking into a Heart, and three Drops of Blood delineated as falling from it.”

The publication added: “This Flag they called Old Roger, and us’d to say, they would live and die under it.”

Though many pirates used such flags, they often employed different motifs. Contemporaneous accounts of 18th-century pirate flags describe hourglasses, hearts dripping blood, skeletons, and swords. Regardless of the exact design, these flags sent a clear and chilling message to nearby ships.

But while the Golden Age of Piracy came to an end, the Jolly Roger lived on. 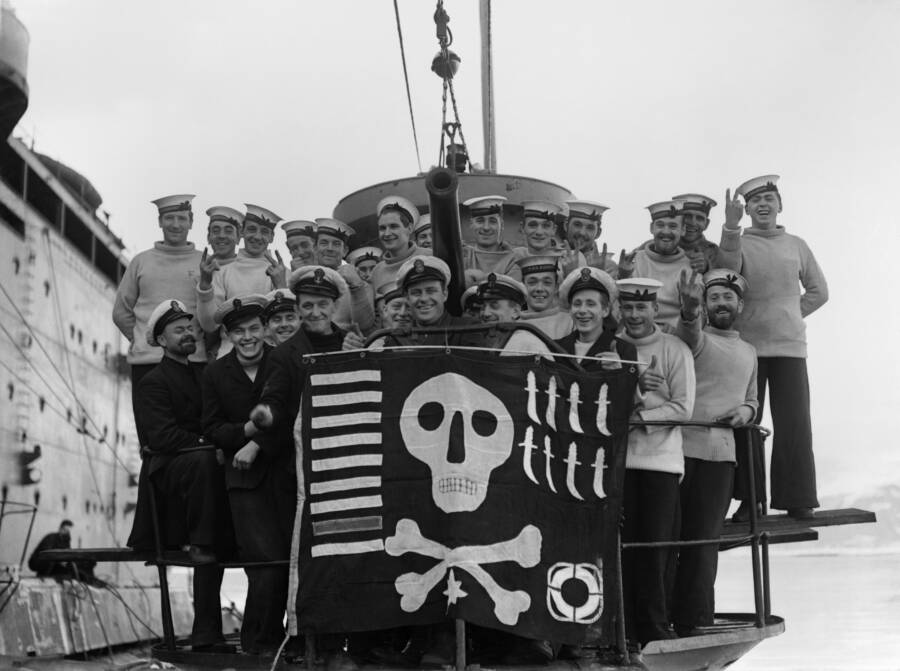 Hundreds of years ago, and especially during the 18th-century Golden Age of Piracy, the Jolly Roger struck fear into vessels who watched it approach. But today, the flag has a different kind of reputation.

“[T]he practice of flying a Jolly Roger has … become [a] tradition within the submarine service in response to a critic who likened them to pirates,” Victoria Ingles, senior curator at The National Museum of the Royal Navy, explained. “These flags are a unique visual record of a boat’s combat activities as well as a striking piece of folk art.”

The design has been used elsewhere as well. According to The New York Times, it inspired the creation of Yale’s “Skull and Bones” secret society and was adapted as the United States’ official symbol for poison. It’s also a popular motif and appears on everything from pet attire to rap albums.

As such, the Jolly Roger is an innocuous symbol today. But back in the day of the pirates, it stood for fear and death. Few things could terrify vessels on the high sea more than the sight of the Jolly Roger hoisted high on a mast, its gleaming skull grinning as it fluttered in the wind.

After reading about the history of the Jolly Roger flag, enjoy this list of famous (and fearsome) pirates. Or, learn about the practice of Matelotage, the same-sex partnerships between colonial-era pirates.