Playwright Jonathan Larson died of undiagnosed Marfan syndrome on January 25, 1996 — the very day that Rent was due to make its off-Broadway premiere.

Jonathan Larson always wanted to be a performer. He played several instruments from a young age, sang in the choir, and nabbed lead roles in ambitious school productions. Heralded a musical prodigy as a result of writing Rent, he never got to cherish his success — and died the day that musical opened off-Broadway.

The native New Yorker was found dead on his kitchen floor by his roommate Brian Carmody on Jan. 25, 1996, at 3 a.m. An autopsy determined that Jonathan Larson died of Marfan syndrome, an inherited disorder that affects the heart, blood vessels, and bones. It’s typically treated with beta-blockers or anticoagulants. 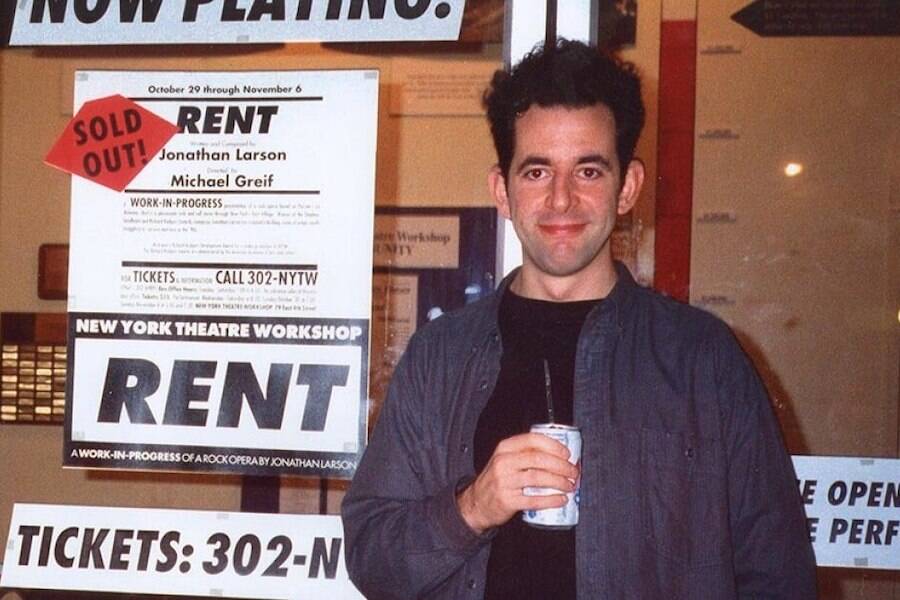 Jonathan Larson’s death was made all the more tragic by the fact that he had been suffering serious chest pains and dizziness and had trouble breathing for several days beforehand. While he had sought medical attention at St. Vincent’s Hospital and the Cabrini Medical Center, doctors attributed his symptoms to stress, according to the Washington Post.

But although his life was cut tragically short, Larson’s body of work has stood the test of time — and even proved prophetic.

His 1983 musical Superbia envisioned a world where people were obsessed with celebrities and relentlessly glued to their handheld devices. In Tick, Tick … Boom!, meanwhile, his autobiographical protagonist was convinced he was hearing a ticking noise and was about to fatally explode — perhaps foreshadowing his own early death.

Jonathan David Larson was born on Feb. 4, 1960, in White Plains, New York. Raised by Allan Larson and Nanette Notarius, he and his older sister Julie had an idyllic childhood in the suburbs. Most of his friends happily spent their days outside, while Larson started gravitating to music before he was even potty trained. 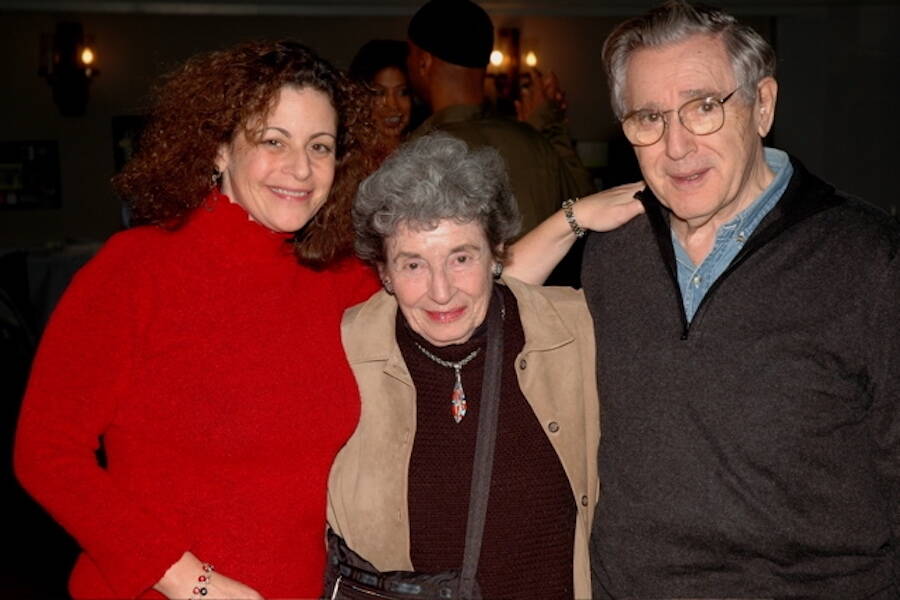 “I was changing his diaper, so he had to be pretty young, and he started singing ‘Yellow Bird,'” recalled his father. “In tune.”

He was still a child when he saw a children’s adaptation of Giacomo Puccini’s La Boheme. Centered on a troupe of struggling artists, the production would inspire him to craft a similar tale of his own — particularly after moving to New York City and experiencing the hardships of work-life and fighting for purpose himself.

After graduating from White Plains High School in 1978, Larson attended Adelphi University on Long Island. He enrolled as an acting major with a four-year scholarship, but he began focusing on musical compositions before graduating with a Bachelor of Fine Arts in 1982. Larson moved to New York City the following year.

Fascinated by George Orwell’s 1984, Larson began adapting the novel into a musical named Superbia. Set in 2064, it followed an inventor named Josh Out who lived in OUTLAND — a city where emotions are erased from citizens at birth. Out retained his feelings, however, and found purpose in helping others regain theirs.

Meanwhile, the district of INCITY is inhabited by the rich and famous whose lives are spent enacting their scripted lives for the entertainment of the poor. Larson’s character begins succeeding in his goal after finding a music box that can liberate his emotionless brethren from their plight. The play was never produced.

Larson later said this “was a good thing … because it was not a very good show. But it was my first attempt to write a big show.” He did soon come into contact with his hero Stephen Sondheim, however, and garnered a reputation in New York’s playwright circles. For the next 12 years, he worked as a waiter — but never stopped writing.

On The Brink Of Starhood

Larson began to wait tables at the Moondance restaurant in Manhattan in 1985. He now had a reliable income and continued to audition for roles while obsessively writing songs. Larson even wrote music for Sesame Street, sold a 30-minute children’s video called Away We Go, and was finding regular freelance work. 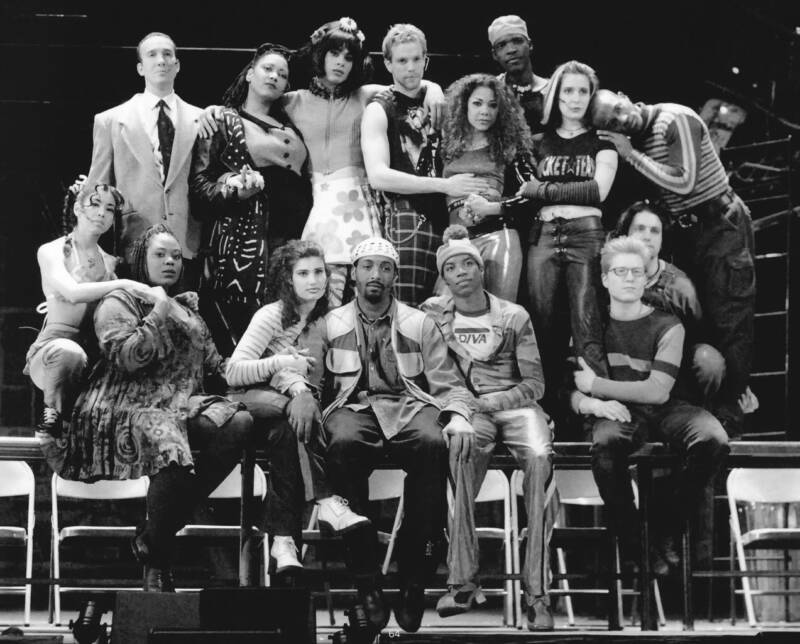 When Sondheim urged him to join the American Society of Composers, Authors, and Publishers (ASCAP), Larson gained extreme confidence in his abilities. After writing more than 100 songs and being interviewed for publications like New York Magazine, he began crafting Tick, Tick … Boom!, which was finished in 1991.

Now a feature film by Lin-Manuel Miranda, Tick, Tick … Boom! was an autobiographical musical influenced heavily by contemporary music. Reflective of Larson’s own life as a struggling artist in New York, the songs were inspired by the works of artists from Kurt Cobain and De La Soul to Tom Waits.

After meeting writer Billy Aronson through a friend at the New York Theatre Workshop, however, Larson became obsessed with another idea. Both adored La Boheme and envisioned a modern version rooted in New York’s yuppie culture. When people began dying of HIV, however, Larson started tailoring it to the crisis.

Larson wrote three songs for the play: “Santa Fe,” “I Should Tell You,” and “Rent.” While industry peers responded glowingly to the demo tape, Larson’s accompanying libretto fell flat. He explained, “We just put it on hold. I loved the concept, but I didn’t have a burning reason to go back to it. And then I did.”

In 1992, Larson left Aronson behind to produce the play with colleague James Nicola. The duo was awarded a $50,000 Richard Rodgers award in 1994. In late 1995, Larson quit his job to finish Rent. He was well on his way until health issues landed him in the hospital in January 1996. He died before the end of the month.

How Did Jonathan Larson Die?

Three weeks before Rent‘s off-Broadway debut at the Nederlander Theatre, Jonathan Larson had severe chest pains and went to the Cabrini Medical Center emergency room, where he was misdiagnosed with food poisoning. Still unwell after being treated, he went to St. Vincent’s Hospital, where doctors said he had a virus.

The young playwright was found dead on his kitchen floor by his roommate on Jan. 25, 1996, at 3 a.m. Jonathan Larson died on the last day of dress rehearsals, with an autopsy finding a foot-long tear in his aorta. Doctors’ failure to locate the playwright’s aortic dissection — even after conducting electrocardiograms and X-rays — resulted in a posthumous malpractice lawsuit. Investigators from New York State concluded Larson would have survived — had the doctors done their due diligence.

Jonathan Larson’s death came without him ever seeing his magnum opus produced. However, Rent would go on to want him a posthumous Pulitzer Prize and gross half a million dollars per week. It would open at theaters around the world and be adapted into a major motion picture, with Larson’s life itself adapted by Lin-Manuel Miranda in 2022.

After Jonathan Larson’s death, his family established the Jonathan Larson Performing Arts Foundation to award promising musical theater artists with grants in 1996. Inspired by Larson and the urgency his hero had so vividly portrayed in his work, Miranda himself applied in 2004 — and would go on to produce renowned musicals of his own.

“I am proud to apply to the Jonathan Larson Performing Arts Foundation Award, particularly because of Jonathan Larson’s profound influence on the path my life has taken,” he wrote. “I saw Rent on my 16h birthday, and it simply changed everything … never had I seen a show that spoke to me so directly.”