The Joro spider is native to East Asia but started appearing in Georgia in 2014 after it likely got trapped on a shipping container. 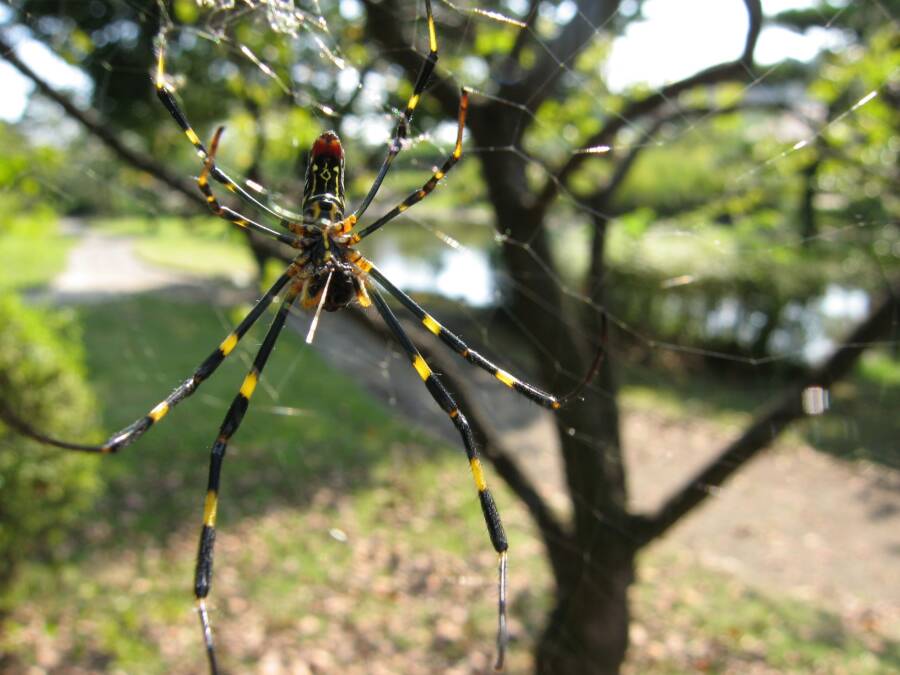 Wikimedia CommonsThe Joro spider can grow up to the size of a human palm and can weave 10-foot webs.

The Joro spider has striking red and yellow markings. It can weave golden, orb-like webs that stretch as much as 10 feet long. And the spider, native to Asia, has made its way to American shores and is currently invading Georgia.

Americans living in the counties surrounding Atlanta in the north of the state have reported a shocking proliferation of these brightly colored spiders. Their golden webs drape across mailboxes, block off porches, and glimmer along power lines.

So, what is the Joro spider? Is it dangerous? And how will it impact the ecosystem in the United States?

What To Know About The Joro Spider

Native to East Asia, the Joro spider is common in countries like Korea, Japan, China, and Taiwan. Japanese folklore depicts the Joro spider as a woman-spider creature called jorō-gumo that can seduce and entrap men. In Korea, it’s referred to as a “fortune teller” spider. 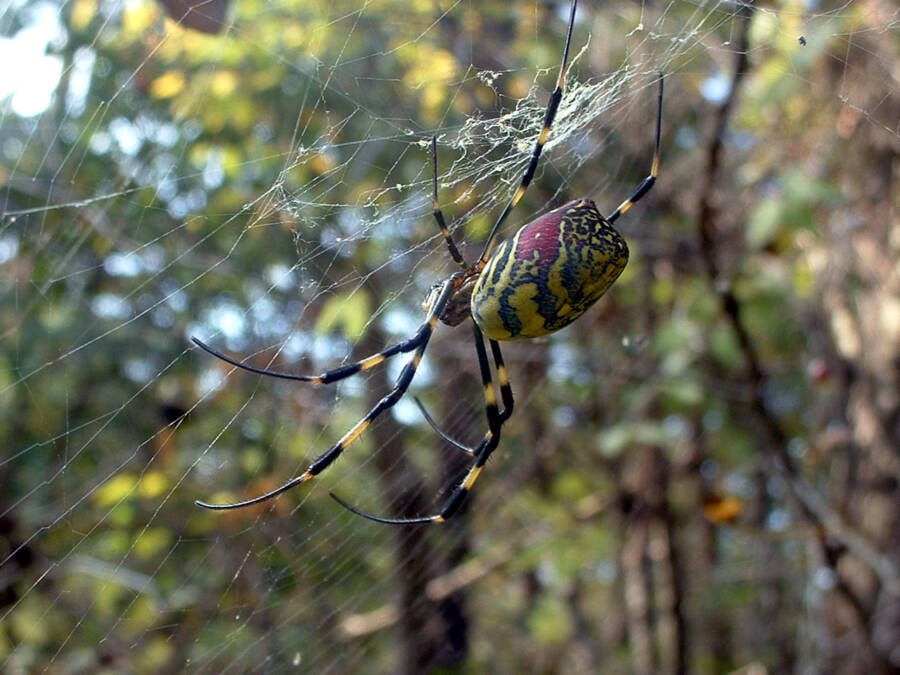 Joro spiders differ in appearance depending on their sex. Females can grow up to three to four inches long and have striking yellow and red stripes that make them easy to spot. Males are much smaller and are colored an unassuming brown. Both have a life span of just one year and are usually spotted in the autumn.

But perhaps the most defining characteristic of the Joro spider is its web. An “orb weaver” spider, they spin highly symmetrical and circular webs. These webs are tough to miss: bright golden and up to ten feet wide, they glimmer and glint under the sun.

Still, the striking appearance of the Joro spider and their lovely golden webs may offer little consolation to the arachnophobes among us. So — are Joro spiders dangerous? Can they kill?

Though the Joro spider is venomous, it won’t bite humans unless it feels threatened. Even then, the bite of a Joro spider isn’t fatal — though it can be very painful.

Until now, the spider had only been found in Asia. But all that changed in 2014 when a sharp-eyed American noticed a Joro spider in Georgia.

How An Asian Arachnid Has Impacted America

In 2014, Rick Hoebeke, the collections manager at the Georgia Museum of Natural History, received a call from a concerned citizen. They’d spotted a bright yellow and red spider. Hoebeke checked it out and, to his surprise, identified it as a Joro spider. 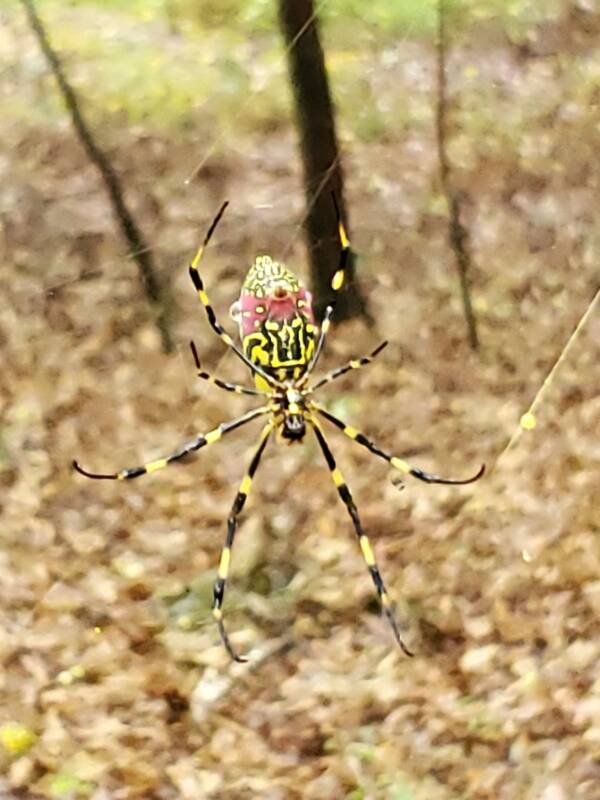 “Our best guess is that it came in a shipping container and dropped off here somewhere on I-85 in the Braselton area,” Hoebeke explained. “They are great little hitchhikers!”

Since then, sightings of the Joro spider have skyrocketed. In 2021, residents of Georgia and South Carolina suddenly noticed millions of the brightly colored spiders. Their golden webs stretch across porches, power lines, mailboxes, and backyards.

“Last year, there were dozens of spiders, and they began to be something of a nuisance when I was doing yard work,” said Will Hudson, an entomologist at the University of Georgia.

But he noticed a dramatic increase in Joro spiders in 2021. Hudson says that Joro spiders have taken over his porch, spinning webs ten feet deep. He’s even killed over 300 females.

“This year, I have several hundred, and they actually make the place look spooky with all the messy webs — like a scene out of ‘Arachnophobia,'” he said.

“The webs are a real mess. Nobody wants to come out of the door in the morning, walk down the steps and get a face full of spider web. They are gorgeous spiders, but there are just too damn many of them.”

Others who have encountered the Joro spiders agree.

“I don’t advocate killing anything. I live in peace with all the spiders around here and everything else,” said Debbie Gilbert of Norcross, Georgia. Faced with the proliferation of Joro spiders, however, she’s taken to wrapping their webs around a stick to bring them down so she can stomp on them.

The annoyance of the Joro spiders’ massive webs aside, some have wondered if the invasive arachnids might damage the native ecosystem. For now, the jury is out. 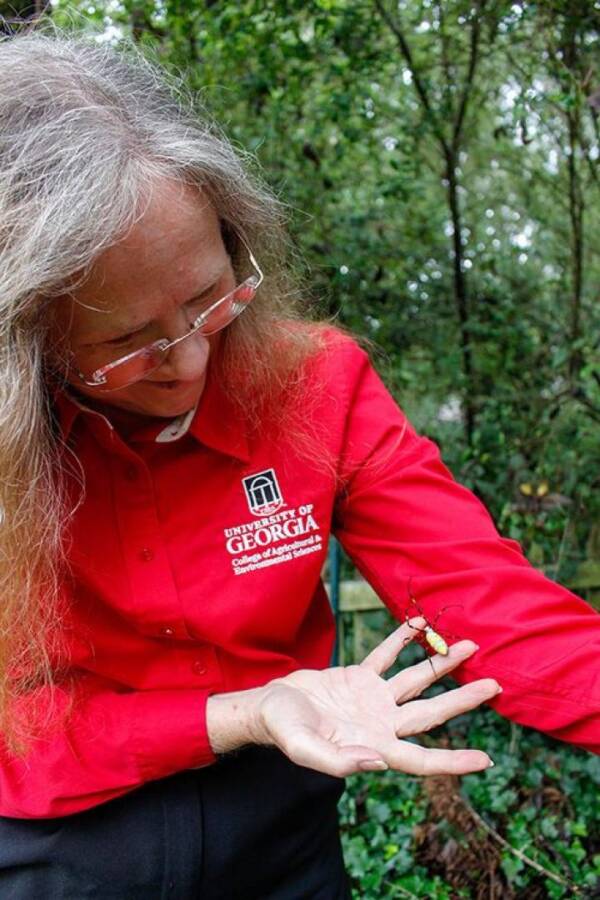 According to researchers at South Carolina’s Clemson University, it’s unclear “if there will be any negative impacts from this non-native species on the local ecology of South Carolina.”

Others are more optimistic and think that the Joro spiders might actually be a boon to the native ecosystem.

“Joro spiders present us with excellent opportunities to suppress pests naturally, without chemicals,” explained Nancy Hinkle, a University of Georgia entomologist. “So I’m trying to convince people that having zillions of large spiders and their webs around is a good thing!”

According to Hinkle, the spiders can effectively kill pests like mosquitos, biting flies, and stink bugs — which are an invasive species themselves and can damage local crops. Plus, Joro spiders don’t present a danger to humans or pets (though people with allergies should be especially cautious).

“This is wonderful. This is exciting. Spiders are our friends,” Hinkle said. “They are out there catching all the pests we don’t want around our home.”

Although the spiders are only found in the southern United States at present, other Americans might catch a glimpse of their golden webs soon. Females are currently laying thousands of eggs. And when spring comes, the wind will pick them up and spread the Joro spider even farther next season.

After reading about the Joro spider, learn about the Huntsman spider, which doesn’t need webs to kill. Or, discover the story of the Banana spider and its ultrastrong web.