A 101-Year-Old Ex-Nazi Concentration Camp Guard Was Just Convicted As An Accessory To Over 3,000 Murders

At the age of 101, Josef Schütz is the oldest person to ever stand trial for Nazi war crimes. 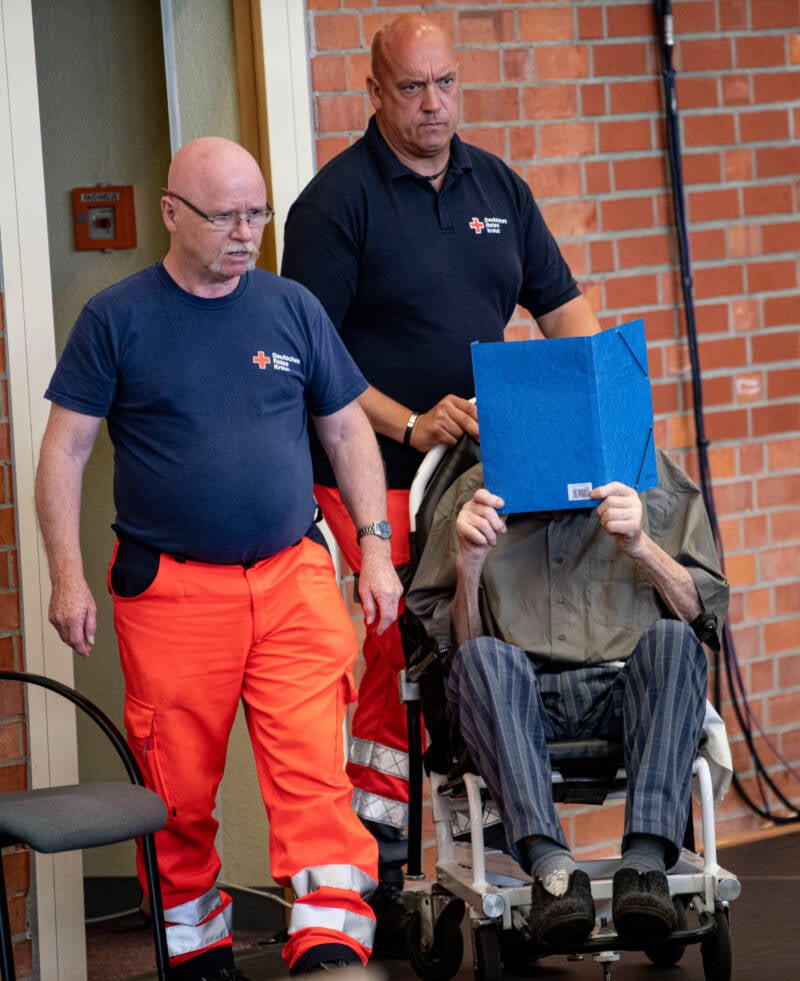 Fabian Sommer/DPA/GettyJosef Schütz is brought to the Neuruppin Regional Court by DRK staff to hear the verdict.

A 101-year-old German man has been found guilty of being an accessory to more than 3,000 murders during the Holocaust, when he served as a Nazi camp guard for three years. Josef Schütz had claimed he never worked at the Sachsenhausen concentration camp, but a Brandenburg-an-der-Havel court found otherwise.

“The court has come to the conclusion that, contrary to what you claim, you worked in the concentration camp as a guard for about three years,” Judge Udo Lechtermann said, according to NPR.

Schütz was accused of aiding and abetting the “execution by firing squad of Soviet prisoners of war in 1942” and the murder of prisoners “using the poisonous gas Zyklon B.” He was found guilty of 3,518 counts of accessory to murder and sentenced to five years in prison.

“You were aware that prisoners were killed there. By your presence, you supported [these acts],” Lechtermann said. “Anyone who wanted to flee the camp was shot. Thus, every camp guard actively participated in the killings.”

However, in court on Monday, June 27, Schütz still continued to insist that he had no involvement in the Nazi genocide and that “everything is false” that’s been said about him.

“I don’t even know what I am supposed to have done,” he said in court. “I have nothing to do with it.”

The German government bureau that seeks justice for Nazi-era crimes tracked Schütz down in 2018 after getting their hands on concentration camp records that were seized by the Red Army after World War II. Those records showed that Schütz joined the SS just before he turned 21 and served at Sachsenhausen between 1942 and 1945. Prosecutors said he even made it to the rank of Rottenführer, the highest in the SS.

Schütz had trouble refuting what prosecutors had found, according to CBS News, claiming that he worked on a farm for the entirety of World War II and that he never even put on an SS uniform. The documents obtained by prosecutors, however, identified him by name and birth date — and clearly put him in the Totenkopf division of the SS, working at Sachsenhausen.

The German government has, in recent years, stepped up efforts to bring former Nazis to justice before they all die out, following a significant high-court ruling in 2016 that upheld the conviction of Oskar Gröning, the so-called “bookkeeper of Auschwitz.”

Gröning was convicted of being an accessory to 300,000 murders at Auschwitz, even though no single death could be attributed to him. 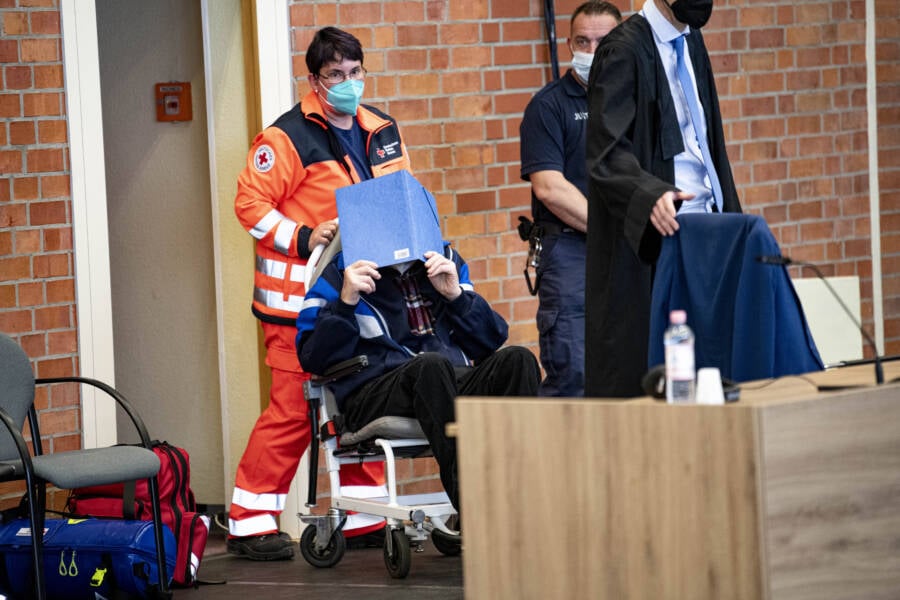 Fabian Sommer/DPA/GettyAccused Nazi guard Josef Schütz hides his face as he enters court in May 2022.

More than 200,000 dissidents, Jews, homosexuals, and Roma were held at Sachsenhausen, where Schütz made his career, according to the Guardian. Tens of thousands died horrible deaths by firing squad, medical experiments, and more.

Investigator Thomas Will told the New York Times, “We go by the simple principle that murder does not have a statute of limitations. It is what’s right, and of course, it would have been what was right 70 years ago.”

Concentration camp survivor Leon Schwarzbaum was transferred to Sachsenhausen from a camp in Poland when the Red Army pressed westward, liberating camps as they went. He was allowed as a co-plaintiff at the trial, according to the Times, but died months before Schütz was convicted.

“I want that if this man is convicted — and hopefully, he will be convicted,” Schwarzbaum said before his death, “he goes to prison.”

Due to Schütz’s age and failing health, however, he’s unlikely to serve prison time. He stands as the oldest person ever to go to trial for complicity in war crimes during the Holocaust.

After learning about former concentration camp guard Josef Schütz, read about the trial of former SS officer Johann Rehbogen. Then, learn about Traudl Junge, Hitler’s personal secretary who claimed she had no idea the Holocaust was going on.

Erik Hawkins
Erik Hawkins studied English and film at Keene State College in NH and has taught English as a Second Language stateside and in South America. He has done award-winning work as a reporter and editor on crime, local government, and national politics for almost 10 years, and most recently produced true crime content for NBC's Oxygen network.
You might also like
Remove Ads
×
Follow hu On