Joshua Halsey was murdered during the Wilmington Massacre that saw a racist mob of 2,000 white men overthrew the city's democratically-elected government and kill up to 300 people. 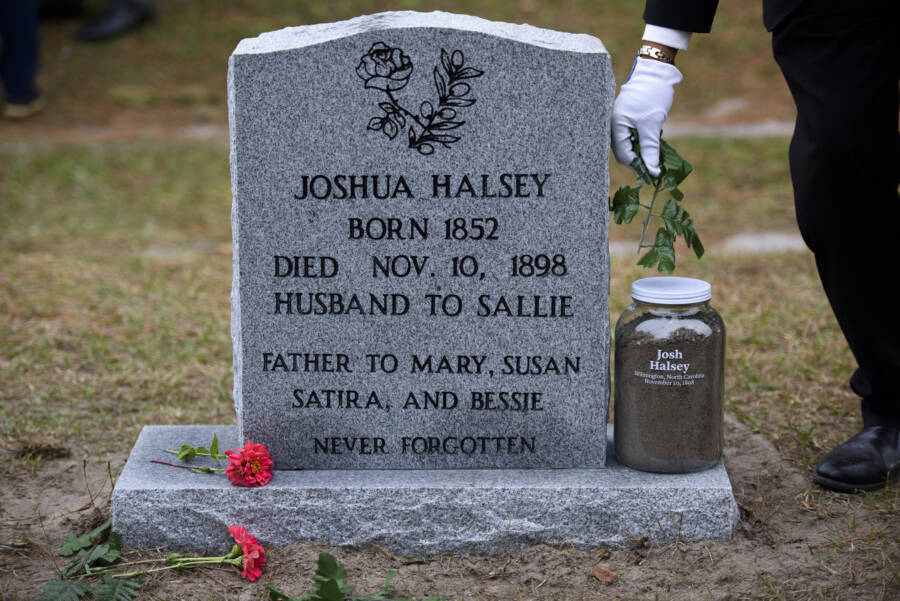 Joshua Halsey, a 46-year-old Black laborer in Wilmington, North Carolina, was awoken by his frightened daughter on Nov. 10, 1898. She begged him to flee their home for fear that a mob was coming to kill him.

On that day, a huge mob of white supremacists did indeed overthrow the Black mayor and aldermen of Wilmington in one of the worst race massacres in American history. More than a century later, what’s become known as the Wilmington Massacre remains America’s only successful coup d’état.

Unfortunately for Joshua Halsey, he was deaf and hadn’t heard the gunshots from the insurrectionists marching down the street. And when they got to his house, it was too late and they shot him 14 times.

Fearing what would happen if the community knew Halsey was murdered, they picked his body up and buried it anonymously in an unmarked grave, lost to history — until now.

Joshua Halsey is the first Wilmington Massacre victim whose grave has been positively identified through a careful study of historical records. Historians estimate that the mob killed 60 to 300 people during the racist massacre on Nov. 10, 1898. 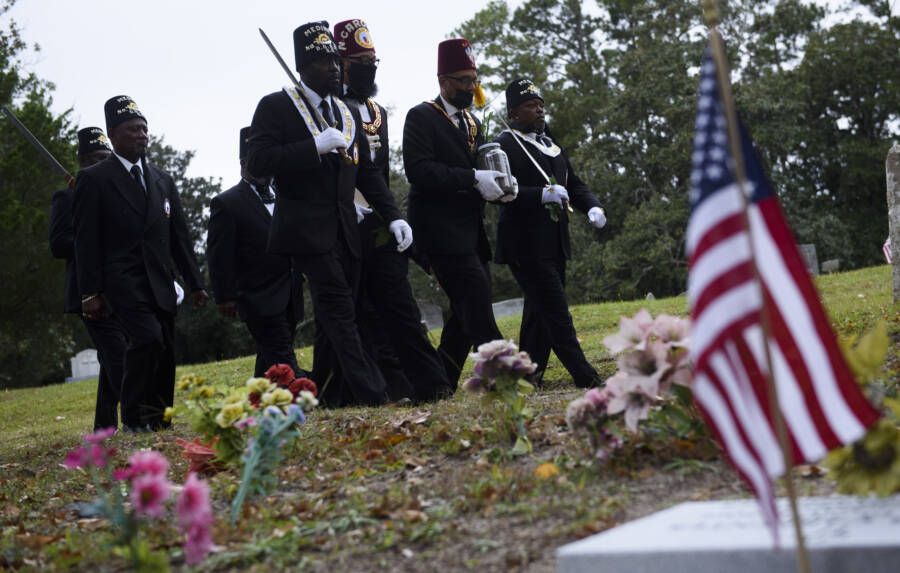 “We were in shock, because this is so unprecedented,” said Elaine Brown, a Halsey descendant.

“But then we said, ‘You know what? Why not Joshua? Why not be the beacon of what can happen when we sort of unearth the truth, uncover the truth and unpack it?… We now are getting the true history of what happened here.”

Halsey’s grave was discovered after a long search that began when a 1998 state report on the massacre definitively identified two of the victims: Joshua Halsey and Samuel McFarland.

With this in mind, historian John Sullivan set out to locate their remains. As founder of the Third Person Project non-profit, he combed through a newly-digitized registry of the Pine Forest Cemetery and used ground-penetrating radar to do so.

“When that was digitized, we were able to go through it and start finding some names that were attached to these families,” Sullivan said.

“Step by step that narrowed down the place where they could have been in the cemetery and then from there we were able to get it from just a meter or so from where the burial is.” 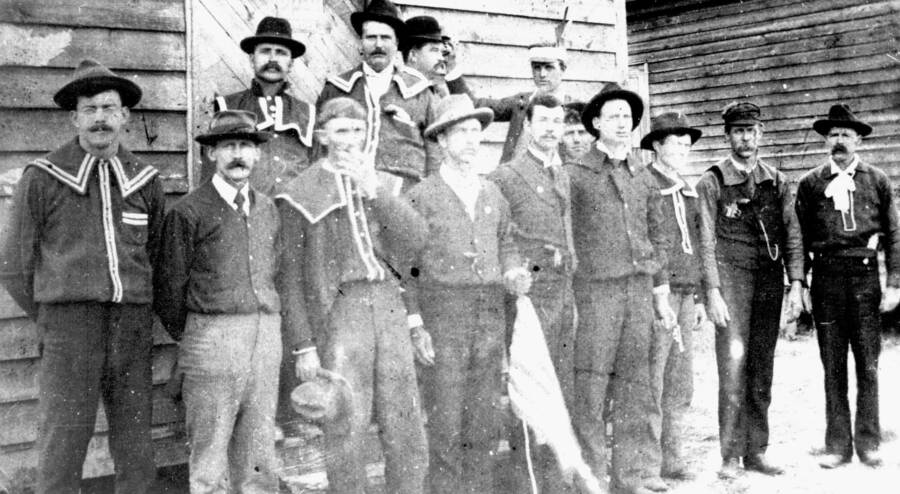 Wikimedia CommonsRed Shirts in Wilmington on election day on Nov. 8, 1898.

Before 1898, Wilmington appeared to be a promising step forward in Reconstruction Era race relations. More than 50 percent of the population was Black, and they had founded a building and loan association and constructed libraries. Black workers comprised much of the labor force, filled government positions, and built a thriving community.

This was precisely what the Democratic Party set out to destroy. It was so disturbed by the strength of Black ownership and the white allies in local government that it employed Red Shirts extremists to undermine the upcoming Nov. 8 elections.

From propaganda in the press to physical intimidation at the polls and outright fraud, it mostly worked. But Wilmington had retained its Black mayor and several Black aldermen. And the Red Shirts wanted them gone.

And on the morning of Nov. 10, 1898, about 500 white supremacists marched on Wilmington and burned down the city’s only Black newspaper, The Daily Record. Soon, the mob swelled to 2,000 people, armed with rifles, pistols, and shotguns stolen from the nearby armory.

Then, they moved to the government buildings and forced the mayor and aldermen to resign at gunpoint. “On the same day, local elected officials were forced to resign, and were replaced by white supremacist leaders,” explained the North Carolina Department of Natural and Cultural Resources.

And following their coup, the Red Shirts paramilitary group killed people in the street and burned down buildings. According to The New York Times, survivors fled into the Pine Forest Cemetery only to die of exposure. And it was during this phase of the massacre that Joshua Halsey tried to flee too. 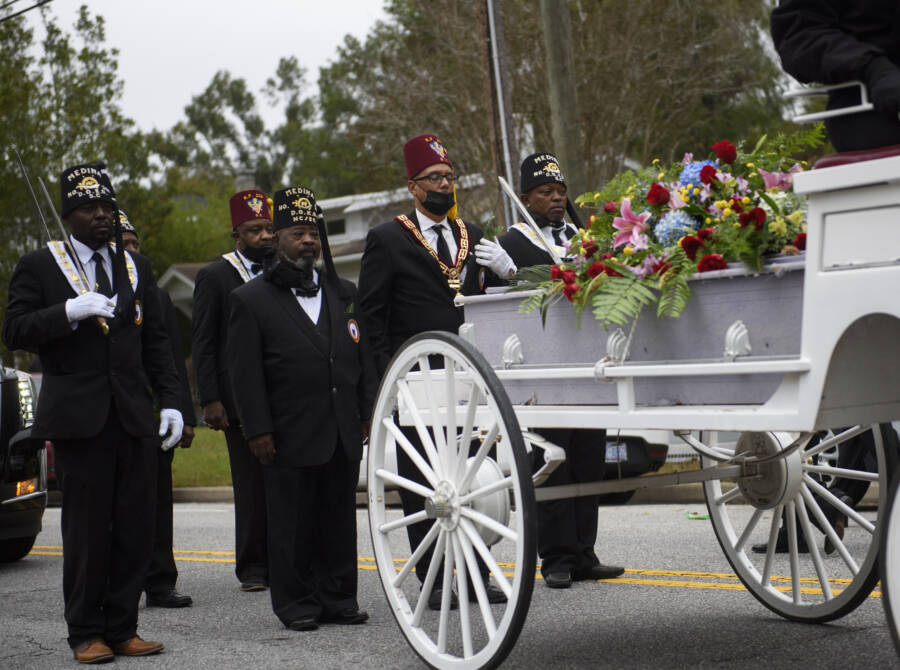 The Wilmington Massacre marked the end of the city’s once-thriving and majority Black population, along with the businesses they had founded. And it also had far-reaching consequences.

According to a document in the William Madison Randall Library of the University of North Carolina Wilmington, “The events of the 1898 coup marked a turning point in the post-Reconstruction South that changed the trajectory of race relations in North Carolina and marked the start of Jim Crow laws in the state, which further enforced racial segregation through the mid-20th century.”

But with Joshua Halsey’s burial, the city is beginning the process of reckoning with its violent past.

With a horse-drawn carriage serving as a hearse, soil from the site of Halsey’s home was carried to the plot of his new grave. Reverend William Barber II of Martin Luther King, Jr.’s Poor People’s Campaign gave the eulogy.

“We must find the vestiges of systemic racism that are still happening today and that are still going on today,” he said. “And we must call them out in Joshua’s name. I’m here to tell you that what killed Joshua is still alive today.”

Joshua Halsey’s funeral was part of a series of events Wilmington held from Nov. 1 to Nov. 10 to commemorate victims of the massacre. For Cynthia Brown, the discovery of her ancestor’s remains has become an opportunity to change things for the better.

“Truth is always difficult to take about, but the more you talk about it, the more it is, you know what I mean?” Brown said.

“The more you accept it, the more you can change things, instead of repeating it. So we have to tell the truth, talk about it and then find ways to deal with this. So this sort of thing doesn’t happen again.”

After reading about the Wilmington Massacre victim who was identified and buried, learn how the Rosewood Massacre wiped out an entire Black town. Then, read about the Tulsa Race Massacre survivor who filed for reparations.