The Kanamara Matsuri festival is more than just penis-shaped candies, it's a celebration of diversity and sex-positivity. 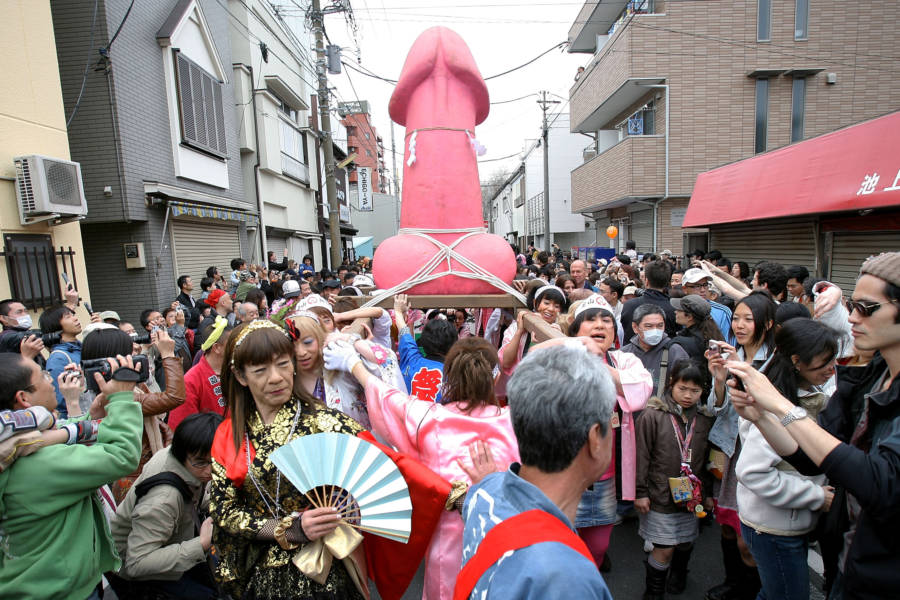 Once a year, every April, thousands of people from around the globe flock to Kawasaki, Japan for Kanamara Matsuri, an ancient fertility festival that celebrates an age-old Japanese legend. At the center of attention? The famed mikoshi – a giant pink penis.

On the first Sunday of every April, the streets of Kawasaki, just north of Tokyo, overflow with colorful phallic-shaped items. Candles, t-shirts, accessories, hats, and signs fill stalls along the streets, while food trucks get to work creating every manner of penis-shaped foods. There are lollipops, candies, and pastries galore, ready for the over-zealous crowds to arrive.

Though it may look like the world’s biggest bachelorette party, Kanamara Matsuri is actually rooted in lore and has ties to the Shinto religion. 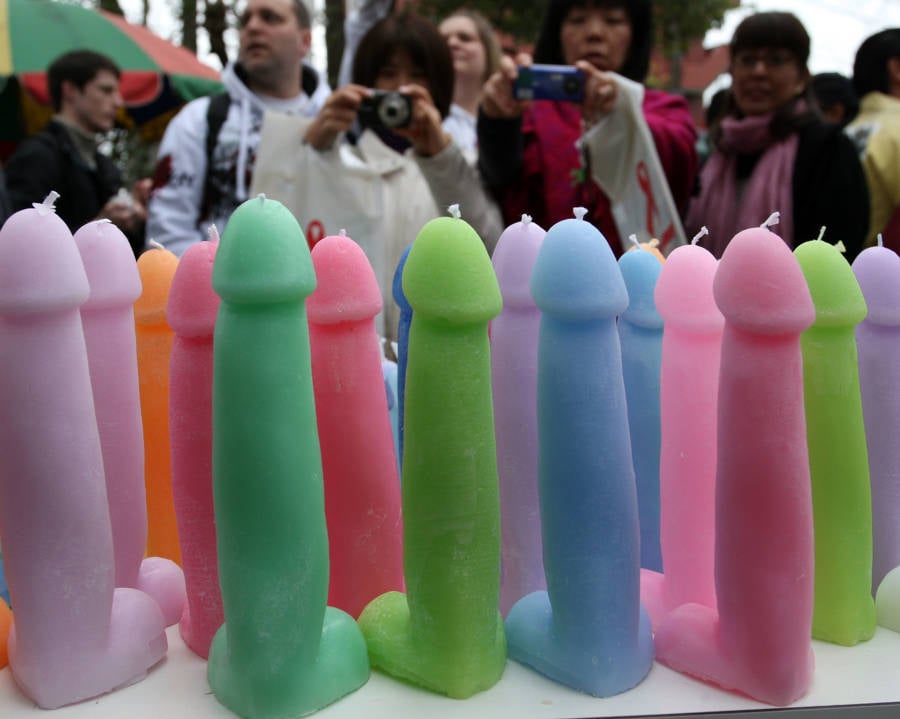 As the legend goes, in ancient times a jealous, sharp-toothed demon fell in love with a young woman. When she showed no interest in him, he hid inside her vagina and bit off the penises of every man she attempted to sleep with. Distraught, the woman sought the help of a blacksmith, who fashioned an iron phallus, which broke the teeth of the demon and set the young woman free.

A shrine was then built to honor the miraculous iron phallus, and from then on it was said that those who visited the shrine would be protected. Prostitutes, in particular, were frequent visitors to the shrine, as they would pray for protection from STDs they encountered while working. The shrine was also said to offer married couples protection and good fortune in conceiving a child.

Today, the shrines are more of a tourist attraction than a religious symbol, though the concept of protection still hangs overhead — the money raised from the festival and tourism is used to promote research for HIV. 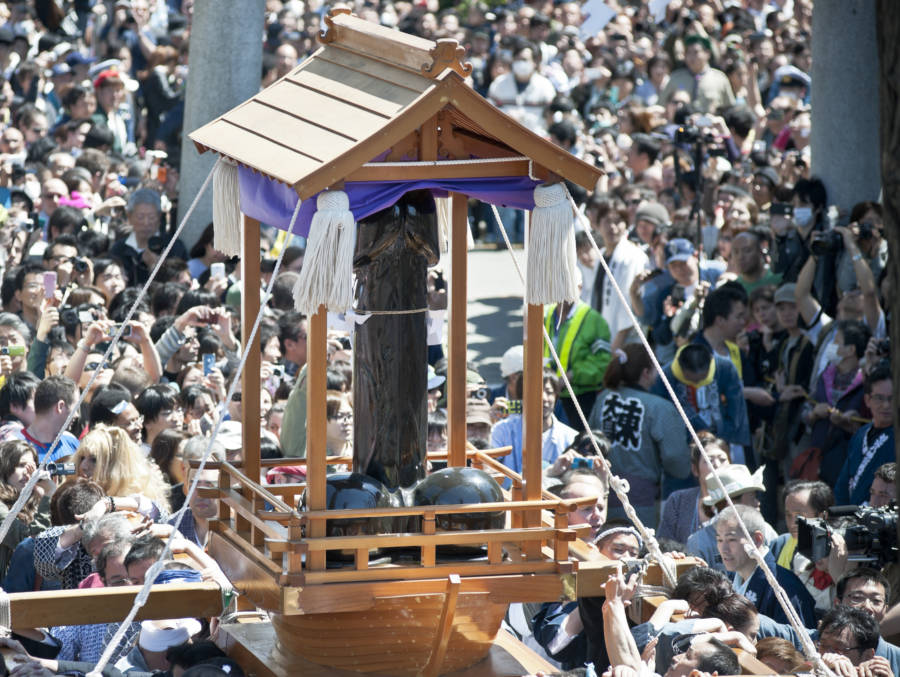 The festival as it exists today began in 1969 and has been a popular event ever since. The event consists of not only the penis-shaped goodies but also a parade, featuring three mikoshi. One is, of course, a six-foot-tall, hot pink phallus, (a gift from a group of drag queens), while the others are more traditional mikoshi, one made of wood, and the other of iron.

While it began as a religious event, the current priestess of the Shinto shrine had made it known that Kanamara Matsuri is now one that celebrates diversity, inclusion, and sex-positivity. 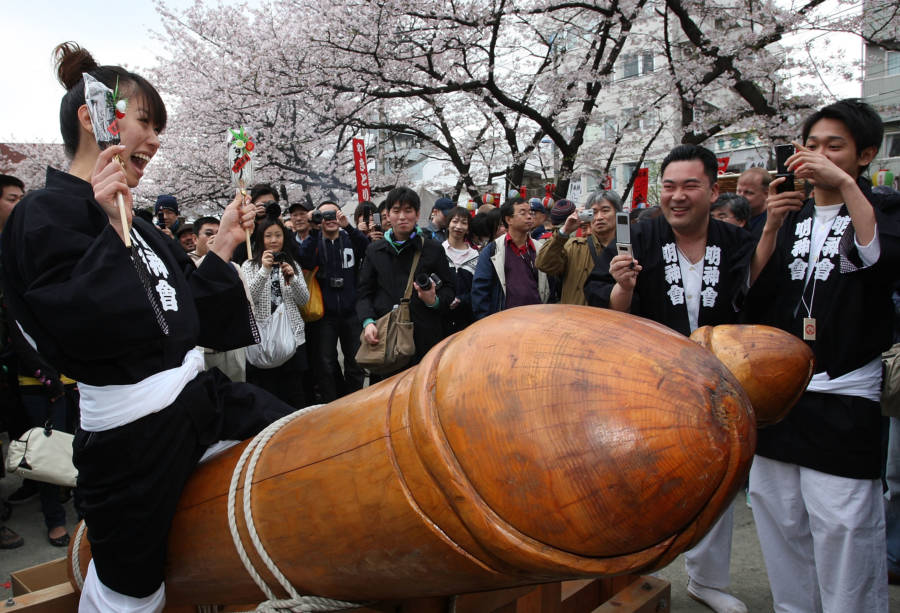 “Officials who handle human rights from City Hall have come to the festival and handed out pamphlets, promoting this festival as an LGBT-positive, non-discriminatory event,” Kimiko Nakamura said. “This event has deep, wide roots in that kind of thinking, and we don’t want anybody to take it another way. We consider that there should be no discrimination against anybody, including LGBT people. Anybody should be able to come to this festival and enjoy it.”

Any newbies wandering the festival will likely be surprised, as Japan’s reputation for modesty is widespread. After a few minutes, though, they should loosen up, as they watch grandmothers and toddlers alike perusing Kanamara Matsuri while wearing phallic-shaped glasses and munching on penis lollipops.