Inside The British Genocide In East Africa 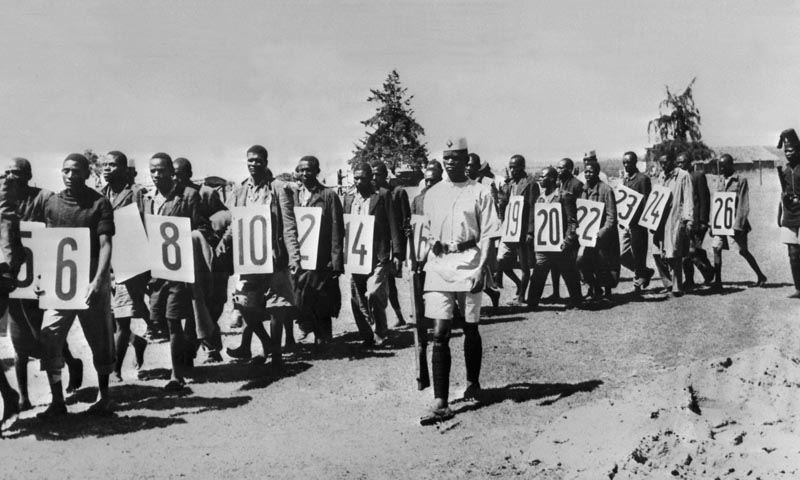 AFP/Getty ImagesCaptured suspected Mau Mau fighters are marched towards Githunguri court in Kenya at the time of the Mau Mau uprising against British colonial rule, April 1953.

None of this happened without resistance from the native people. The Kikuyu were then the largest and strongest tribe in the colony, and they made life difficult for the settlers in whatever ways they could.

From individual acts of secret sabotage to the rare open revolt by one or another faction of the tribe, the Kikuyu kept pressure on the British to renegotiate some of the harsh terms that they had set for the colony. Some Kikuyu even hired lawyers and sued the Crown over the uncompensated land grab. The British-dominated Kenya High Court heard the case in 1921, and in the opinion of the judges:

“This judgment is now widely known to Africans in Kenya, and it has become clear to them that, without their being previously informed or consulted, their rights in their tribal land, whether communal or individual, have ‘disappeared’ in law and have been superseded by the rights of the Crown.”

In other words: finders, keepers.

As the legal avenues for redress closed, extralegal routes opened for settlers who grew to hate and fear their own workers.

For a time in the 1920s, the two populations’ relationship resembled a slow-burning war of attrition. Black servants who spent the day serving gin and tonics – or morphine concentrate, which was also popular in the EAP – to their white employers might, after dark, be the very “kukes” who snuck out to hamstring the master’s cattle in the field.

The white landowners retaliated with repressive laws stripping even more rights from the natives and taxing them into penury. Extralegal whippings and murders came frequently.

Settler began to restrict the natives’ freedom of movement to an obscene degree. In Nyanza Province, for example, the region’s 1.1 million blacks were confined to a reservation that covered around 7,100 square miles, a density of 141 people per square mile. The district’s 17,000 whites, however, had nearly 17,000 square miles of good farmland to themselves.

The Beginnings of Armed Resistance 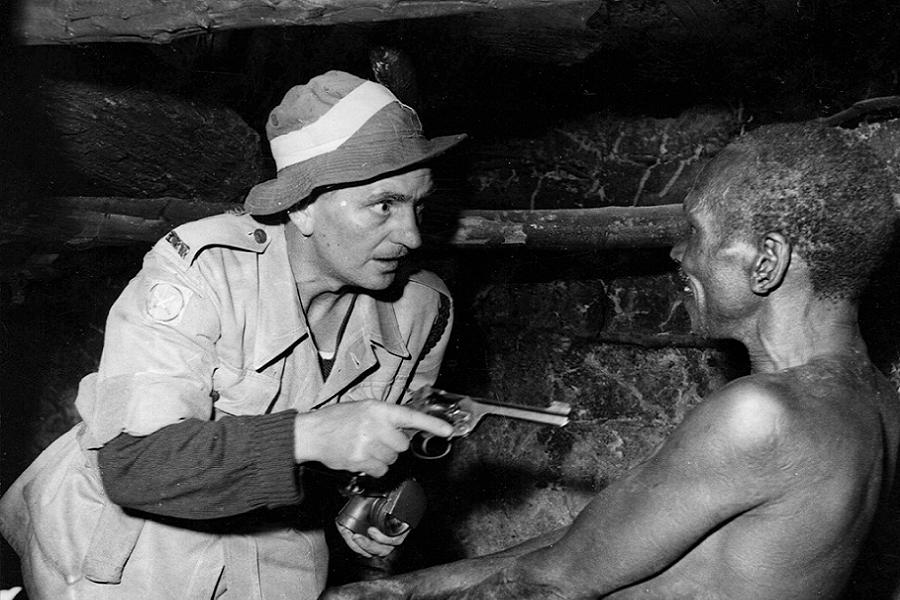 Deprived of their land and their rights, squeezed out of the economy, and herded into reservations that had become little more than rural ghettos, the Kikuyu began organizing. Throughout the 1930s and ’40s, tribal leaders circulated petitions and organized boycotts to pressure the British into making concessions to their people.

The advocacy groups demonstrated and led strikes, but colonial authorities countered almost every move they made. The British imposed a strict surveillance state in which any black could be stopped and questioned or searched for any reason, and they began to cultivate Kikuyu allies with grants of land and other inducements to provide intelligence on their kinsmen’s increasingly secretive political operations.

These collaborators were exceptionally effective in exposing and cracking open liberation movements, and so they became the principal targets of other Kikuyus’ hate. To thwart spies, the Kikuyu joined with a few other tribes and formed a secret society based on a blood oath.

Members swore to fight off, sabotage, and kill their oppressors, and to keep the secrets of the society unto death. The oath-takers called themselves the Kenya Land and Freedom Army (KLFA), but the British authorities came to call them Mau Mau.

Then, in 1952, a vehemently pro-British Kikuyu chief named Warhuiu was shot to death in his car. His death was all the excuse that the new governor, Evelyn Baring, who had arrived in Kenya all of three days earlier, needed to declare an emergency and impose martial law on Kikuyu areas.

Nothing provokes a reaction like having soldiers on every street corner, so assassinations and sudden nighttime attacks became common. Very soon, the British in Kenya were stuck in a situation similar to the American position in Vietnam a decade later – by day, the whole territory was peaceful and quiet; at night, the streets and fields belonged to the Mau Mau, who weeded out informants with ruthless efficiency and butchered them so brutally that many of the witnesses preferred arrest and torture by the Home Guard rather than to inform on the killers.