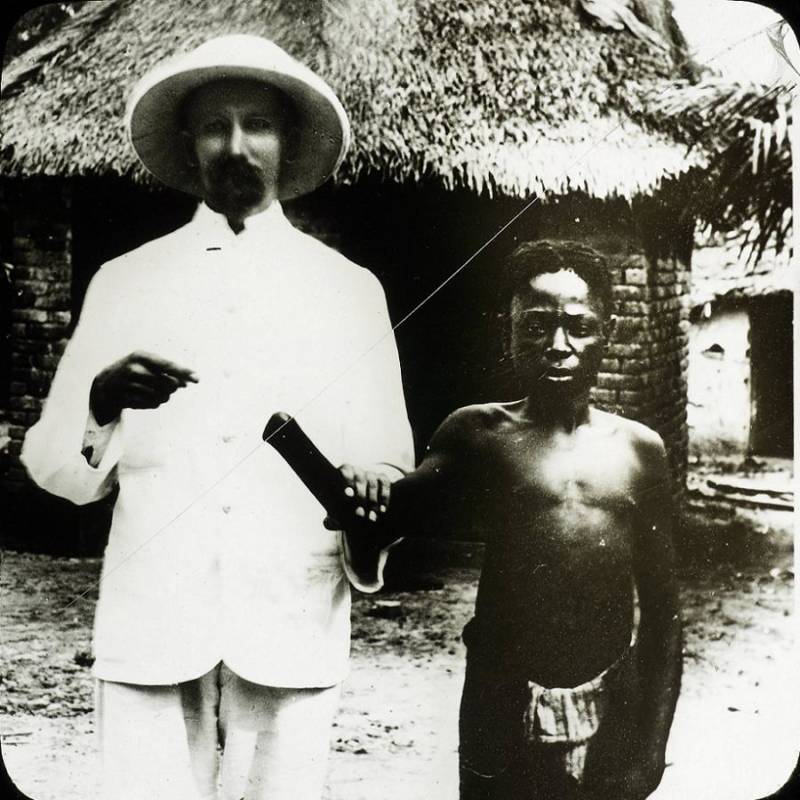 Generally speaking, colonists need to employ some form of violence to acquire and maintain control of the colonized, and the more exploitative the arrangements on the ground, the more violent the colony’s rulers have to be to get what they want. During the 25 years that the Congo Free State existed, it set a new standard for cruelty that horrified even the other imperial powers of Europe.

The conquest started with Leopold bolstering his relatively weak position by making alliances with local powers. Chief among these was the Arab slave trader Tippu Tip.

Tip’s group had a considerable presence on the ground and sent regular shipments of slaves and ivory down to the Zanzibar coast. This made Tip a rival to Leopold II, and the Belgian king’s pretense of ending slavery in Africa made any negotiation awkward. Nevertheless, Leopold II eventually appointed Tip as a provincial governor in exchange for his noninterference in the king’s colonization of the western regions.

Tip used his position to ramp up his slave trading and ivory hunting, and the generally anti-slavery European public brought pressure on Leopold II to break it off. The king eventually did this in the most destructive way possible: he raised a proxy army of Congolese mercenaries to fight against Tip’s forces all over the densely populated areas near the Great Rift Valley.

After a couple of years, and an impossible to estimate death toll, they had expelled Tip and his fellow Arab slavers. The imperial double-cross left Leopold II in complete control. 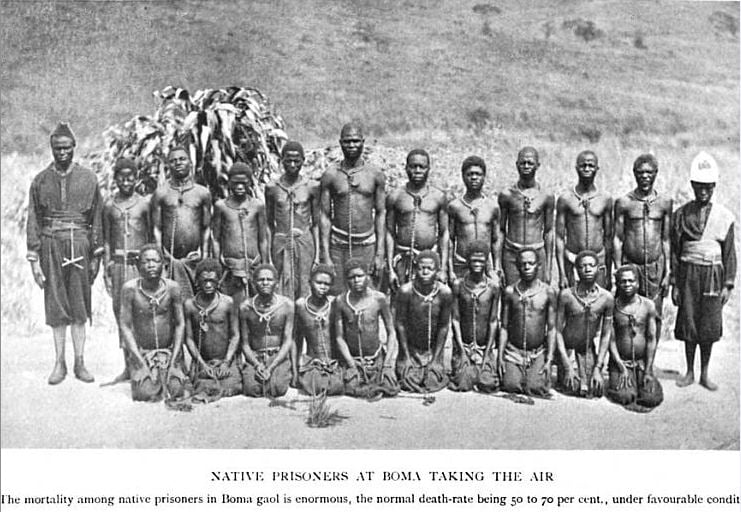 With the field cleared of rivals, King Leopold II reorganized his mercenaries into a ruthless group of occupiers called the Force Publique and set them to enforcing his will across the colony.

Every district had quotas for producing ivory, gold, diamonds, rubber, and anything else the land had to give up. Leopold II handpicked governors, each of whom he gave dictatorial powers over their realms. Each official was paid entirely by commission, and thus had great incentive to pillage the soil to the maximum of his ability.

Governors press-ganged huge numbers of native Congolese into agricultural labor; they forced an unknown number underground, where they worked to death in the mines.

These governors — vis a vis the labor of their slave workers — looted Congo’s natural resources with industrial efficiency.

They slaughtered ivory-bearing elephants in massive hunts that saw hundreds or thousands of local beaters driving game past a raised platform occupied by European hunters armed with half a dozen rifles each. Hunters used this method, known as a battue, extensively in the Victorian Period, and was scalable such that it could empty a whole ecosystem of its large animals.

Under the reign of Leopold II, the Congo’s unique wildlife was fair game for sport killing by almost any hunter who could book passage and pay for a hunting license. 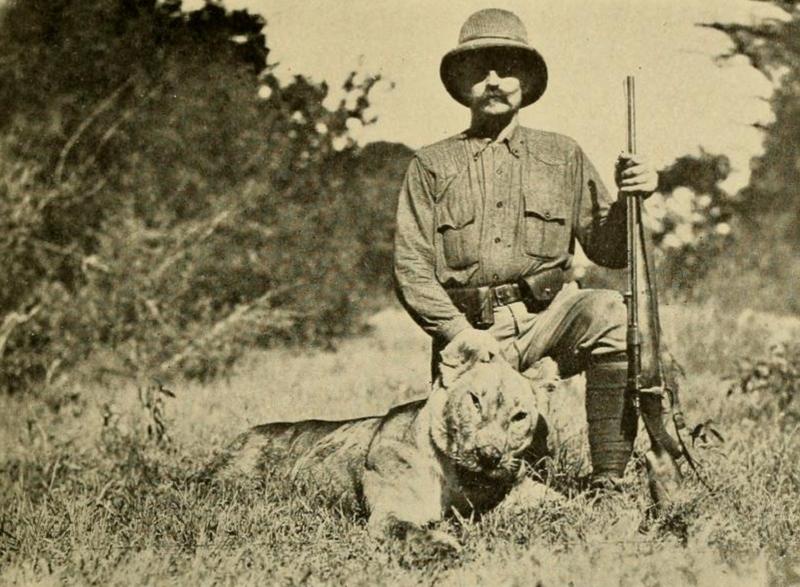 Elsewhere, violence took place on rubber plantations. These establishments take a lot of work to maintain, and rubber trees can’t really grow on a commercial scale in an old-growth rain forest. Clear cutting that forest is a big job that delays the crop and cuts into profits.

To save time and money, the king’s agents routinely depopulated villages – where most of the clearance work had already been done – to make room for the King’s cash crop. By the late 1890s, with economical rubber production shifting to India and Indonesia, the destroyed villages were simply abandoned, with their few surviving inhabitants left to fend for themselves or make their way to another village deeper in the forest.

The greed of the Congo’s overlords knew no boundaries, and the lengths to which they went to gratify it were likewise extreme. Just as Christopher Columbus had done in Hispaniola 400 years earlier, Leopold II imposed quotas on every man in his realm for production of raw materials.

Men who failed to meet their ivory and gold quota even once would face mutilation, with hands and feet being the most popular sites for amputation. If the man could not be caught, or if he needed both hands to work, Forces Publique men would cut the hands off of his wife or children. 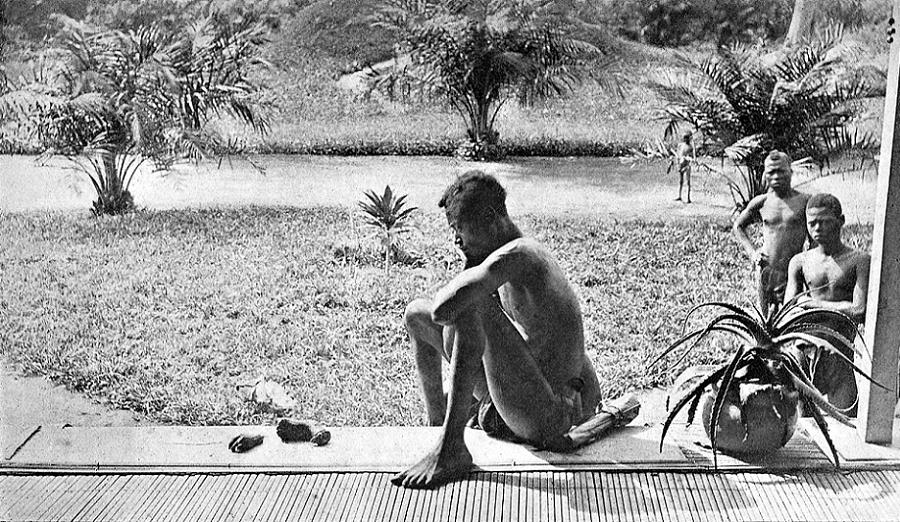 Wikimedia CommonsNsala of Wala contemplates the severed hand and foot of his five-year-old daughter in 1904.

The king’s appalling system began to take its toll on a scale unheard of since the Mongol rampage across Asia. Nobody knows how many people lived in the Congo Free State in 1885, but the area, which was three times the size of Texas, may have had up to 20 million people before colonization.

At the time of the 1924 census, that figure had fallen to 10 million. Central Africa is so remote, and the terrain is so difficult to travel across, that no other European colonies reported a major refugee influx. The perhaps 10 million people who disappeared in the colony during this time were most likely dead.

No single cause took them all. Instead, the World War I-level mass death was mostly the result of starvation, disease, overwork, infections caused by mutilation, and outright executions of the slow, the rebellious, and the families of fugitives.

Eventually, tales of the nightmare unfolding in the Free State reached the outside world. People railed against the practices in the United States, Britain, and the Netherlands, all of which coincidentally owned large rubber-producing colonies of their own and were thus in competition with Leopold II for profits.

By 1908, Leopold II had no choice but to cede his land to the Belgian government. The government introduced some cosmetic reforms right away – it became technically illegal to randomly kill Congolese civilians, for example, and administrators went from a quota-and-commission system to one in which they received pay only when their terms ended, and then only if their work was judged “satisfactory.” The government also changed the colony’s name to the Belgian Congo.

And that’s about it. Whippings and mutilations continued for years in the Congo, with every penny in profit siphoned out until independence in 1971.