10 million Congolese were killed and millions more enslaved and mutilated during King Leopold II's brutal reign. Now, King Philippe is the first member of the royal family to acknowledge the atrocities.

Wikimedia CommonsKing Philippe is a distant nephew of Leopold II.

King Philippe of Belgium sent his “deepest regrets” for the country’s past atrocities in a letter to President Félix Thisekedi of the Democratic Republic of Congo (DRC) on Tuesday. The letter coincided with the 60th anniversary of the DRC’s independence and was a historic first.

Never before has a member of the Belgian royal family acknowledged King Leopold II’s decades of brutal colonization in the African nation. According to The New York Times, critics of the message were frustrated that it stopped short of an apology — and didn’t actually take responsibility.

“I want to express my deepest regrets for the wounds of the past, the pain of which is revived today by discriminations that are still too present in our societies,” the king wrote to President Félix Tshisekedi, adding that he would “continue to fight against all forms of racism.”

According to CNN, King Philippe is not only Belgium’s highest representative — but a distant nephew of Leopold II. Between 1885 and 1908, his ruthless relative colonized what he called the Congo Free State. The history of rape, murder, and genocide he inflicted upon Congo still lingers to this day.

The great European “Scramble for Africa” in the 19th century transformed the entire continent. More than 80 percent of Africa south of the Sahara was under sovereign rule by indigenous kings or chiefs in 1870. Within 40 years, all of it had been taken over by European colonists.

According to Britannica, King Leopold II presented himself as a savior who could improve the region through Christianity, Western commerce, and refine the civilization as a whole. However, his claims were merely a guise to take control of territory along the Congo River and exploit its resources.

Leopold even persuaded the United States and major European nations to recognize the stolen land as his personal property. The État Indépendant du Congo (or Congo Free State) was anything but. Referring to himself as its “proprietor,” Leopold had established the world’s only private colony.

He initially had his eye on ivory, the brutal quest for which was searingly depicted in Joseph Conrad’s Heart of Darkness. By the 1890s, however, a worldwide rubber boom had hit the scene — and Leopold’s claim over the rubber-rich area of Central Africa became highly fortuitous.

Through the enslavement of locals who worked or starved to death, Belgium made a fortune. Hundreds of thousands of Congolese fled, while tens of thousands were killed or had their arms cut off for rebelling. Between 1880 and 1920, the population plummeted from 20 million to 10 million. 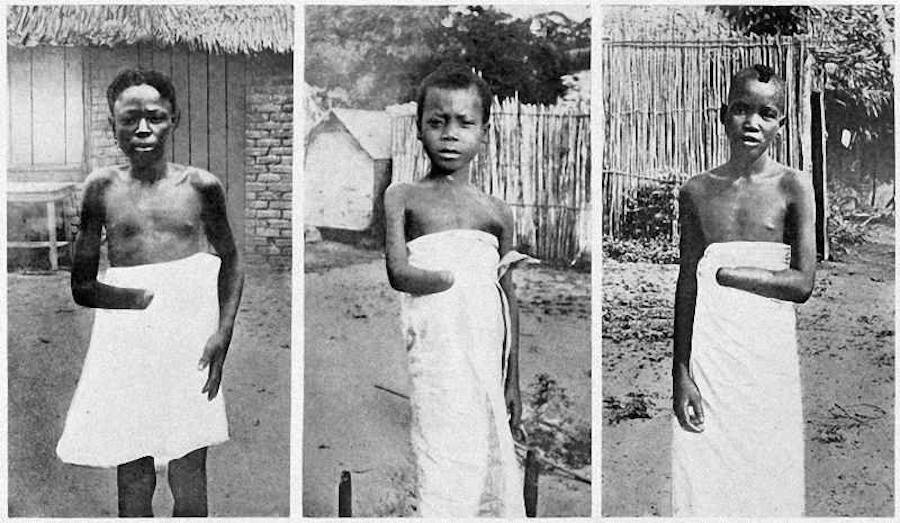 Wikimedia CommonsThe population of the Congo fell by half — from 20 million people to 10 million people — between 1880 and 1920. Tens of thousands were killed or maimed for rebelling.

With U.S. protests in wake of George Floyd’s murder by police, people around the globe have taken to the streets to demand their own governments reckon with the past. For Belgium’s anti-racism demonstrators who demand monuments to Leopold II be taken down, Tuesday’s letter was a win.

“I want concrete acts,” he said. “There are still people who don’t know this history…there are lots of people who want to deny or don’t understand what happened. It is very much about finding the truth. It is never too late.”

Earlier this month, the Belgian parliament began taking more active measures. Lawmaker Van Hoof approved an inquiry into the country’s colonial history, which appears to be reckoning with how to acknowledge it — and whom exactly it befalls to do so.

Earlier this month, a Leopold II statue in Antwerp was taken down by Black Lives Matter protestors. Another across from the Royal Palace in Brussels has been repeatedly defaced with graffiti.

“We want an apology, a real one,” said Belgian Black Lives Matter activist Joelle Sambi. “Not one that asks us to read between the lines.”

Though Van Hoof has decided that something should be done, he did not commit to removing all statues of Leopold II — opting instead to use them as history lessons. This stance is the polar opposite of what activists like Sambi are demanding, creating a standstill between perspectives.

As it stands, the letter has been well received by President Thisekedi — who was expecting King Philippe at the Independence Day celebrations in Kinshasa until the coronavirus hampered his visit.

“I consider it necessary that our common history with Belgium and its people be told to our children in the Democratic Republic of Congo as well as in Belgium on the basis of scientific work carried out by historians of the two countries,” he said.

“But the most important thing for the future is to build harmonious relations with Belgium because beyond the stigmas of history, the two peoples have been able to build a strong relationship.”

After reading about King Philippe of Belgium expressing his “deepest regrets” to the Democratic Republic of Congo for colonial atrocities, learn about African kingdoms just before and after European colonial terror began. Then, read about euthanasia in Belgium under fire after a 9 and 11-year-old were allowed to die.