The Incredible Story Behind The Iconic ‘Kiss Of Life’ Photo

On July 17, 1967, a Florida photographer named Rocco Morabito captured one electrical lineman saving the life of another in an image that would go down in history. 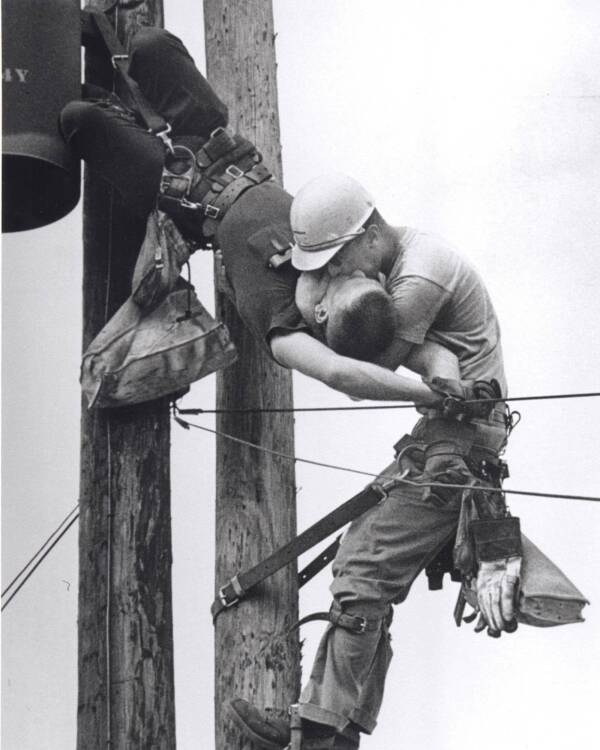 There’s an eerie elegance to the photo — two men in midair, posed like dancers. One hangs upside down with his arms over his head. The other cradles him and presses their faces together.

The so-called “Kiss of Life” photo resonates because of its unsettling beauty. It presents a dramatic and life-saving rescue, high on a utility pole, where life literally hangs in the balance between two men’s leather safety straps.

After capturing the heroism of one electrical lineman toward another, Jacksonville Journal photographer Rocco Morabito took his camera back to the newsroom. “I think I’ve got a pretty good picture,” he told his editor. Morabito’s photograph would later win a Pulitzer Prize.

This is the story of what happened on that breathtaking Florida afternoon.

The Story Behind The ‘Kiss Of Life’ Photo 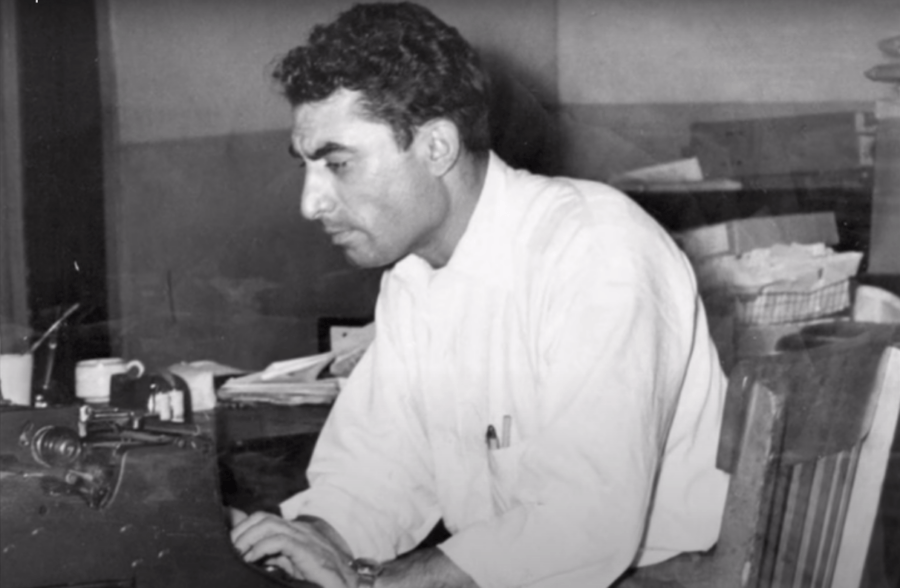 On July 17, 1967, Rocco Morabito went to look at some trains. The workers were on strike, and Morabito had a deadline at noon.

But as he returned from his assignment, he glanced up at the sky. There, against a brilliant blue backdrop, a number of Jacksonville Electric Authority (JEA) linemen worked on electricity poles. As Morabito studied them, thinking about how to frame a possible photo, a cry rose from the crowd.

A worker on one of the poles had slumped backward. Held in place by his safety harness, Randall Champion hung upside down and unconscious above the horrified crowd. He’d accidentally contacted one of the power lines and absorbed 4,000 volts of electricity. Alarmed, Morabito radioed the newsroom and told them to send an ambulance.

Then he started snapping pictures.

As the crowd watched in horror, the linemen on the poles struggled to get to Champion. Then, from 400 feet away, came a lineman named J.D. Thompson.

Thompson was Champion’s friend. He’d met him four years earlier when they both started at JEA on the same day. When he saw his friend in trouble, he sprang into action.

“[Champion] got a hold of the hot wire with his four fingers,” Thompson later recalled, “and [the electrical current] came out his – I think it was the left foot. And it blew a hole where it came out his foot.”

Thompson scrambled up the poll to Champion. Champion “didn’t look good at all,” Thompson said. His face had turned “gray-ish blue.” To save his friend, Thompson relied on his training.

On the ground, Rocco Morabito relied on his own. 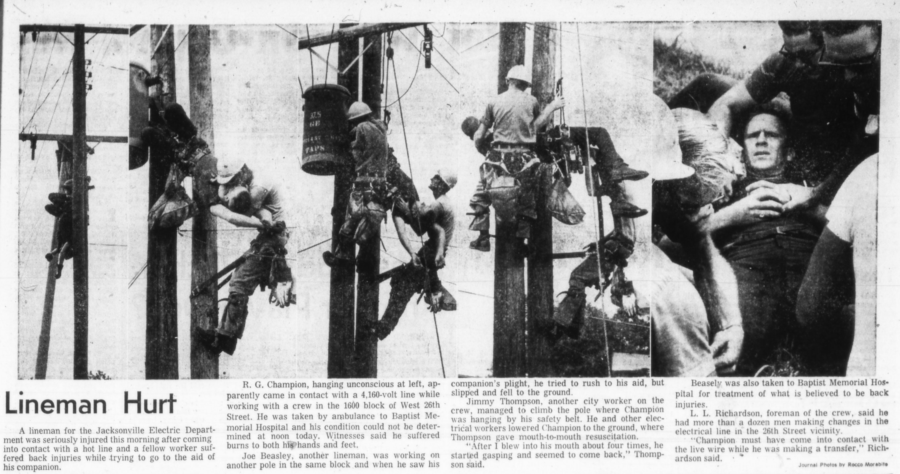 Florida Times-UnionMorabito captured the stomach-dropping scene in a series of five photos.

Morabito snapped a series of photos as Thompson struggled to save his friend’s life by giving mouth-to-mouth resuscitation. Finally, Champion “started gasping and seemed to come back,” Randall remembered.

Champion went to the hospital with burns. Morabito went back to his newsroom with a Pulitzer Prize-winning photo. 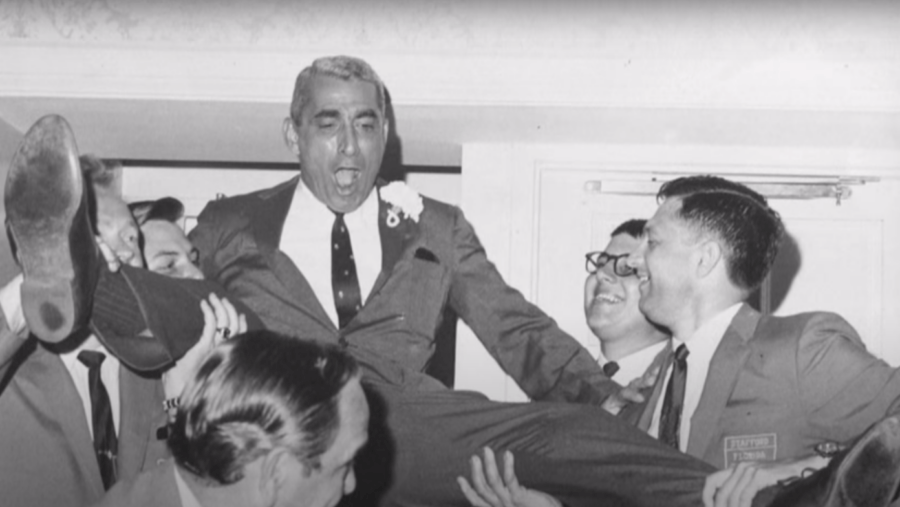 YouTubeIn 1968, Rocco Morabito won the Pulitzer Prize for his photograph.

Rocco Morabito knew he had a special photograph. Back at the newsroom, Jacksonville Journal editor Dick Brussard agreed to push the print deadline so that they could include Morabito’s picture. And the Journal‘s copy editor Bob Pate suggested an inspired caption: “The Kiss of Life.”

After the Associated Press picked up the photo, the image raced through newspapers across the country. Ten months later — to the excitement of the entire Jacksonville Journal staff — Rocco Morabito and “The Kiss of Life” photo won a Pulitzer Prize.

“It was an incredible act of heroism, a life-or-death moment, all captured by Rocco in a split second,” said Jacksonville Historical Society Executive Director Emily Lisska. “It was an extraordinary moment for our city.”

Lineman Randall Champion recovered from his injuries. He and J.D. Thompson worked for JEA for 30 years. The two stayed friends and even became close with Morabito. The three were photographed together in 1988 to mark the last day of publication of the Jacksonville Journal — even though Champion was in the hospital recovering from bypass surgery at the time. 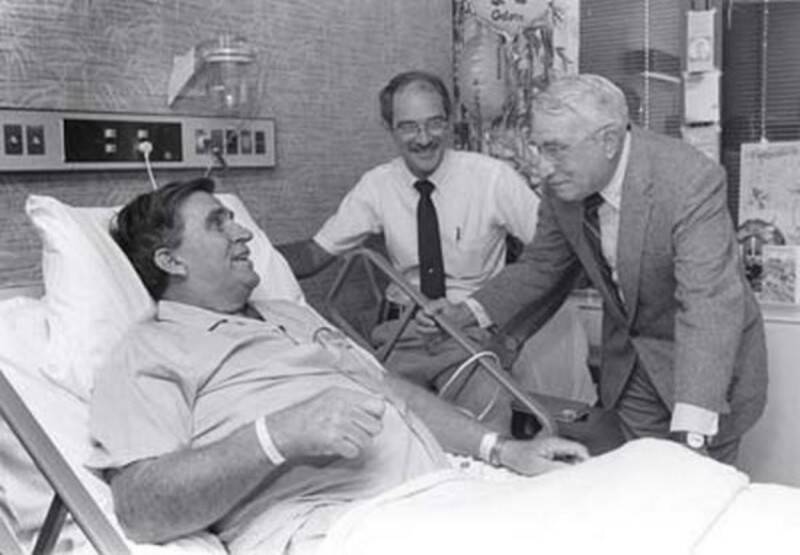 Long after that fateful summer day in 1967, Morabito’s “Kiss of Life” photo continues to stun. The Newseum, a journalism museum in Washington, D.C., that closed in 2019, displayed the photograph in their permanent collection. Indira Williams Babic, the museum’s director of photography and visual resources, said it left audiences “spellbound.”

Morabito’s photo had all the elements of great photography, said Babic. That’s why it has stood the test of time.

“It has that imminent-danger element to it that draws young and old, and it also has that great altruistic factor: a human helping another human, saving a life in a really dicey position.”

After reading about the iconic “Kiss of Life” photo, learn about the stories behind two other famous pictures: the heartbreaking Saigon execution photo and the iconic picture of Albert Einstein with his tongue out.