An 84-Year-Old German Retiree Has Just Been Fined $300,000 For Keeping A Nazi WWII Tank In His Basement

German officials discovered the rare Panther tank along with a stockpiled arsenal of Nazi weapons, including an anti-aircraft cannon, a torpedo, and 70 rifles and machine guns. 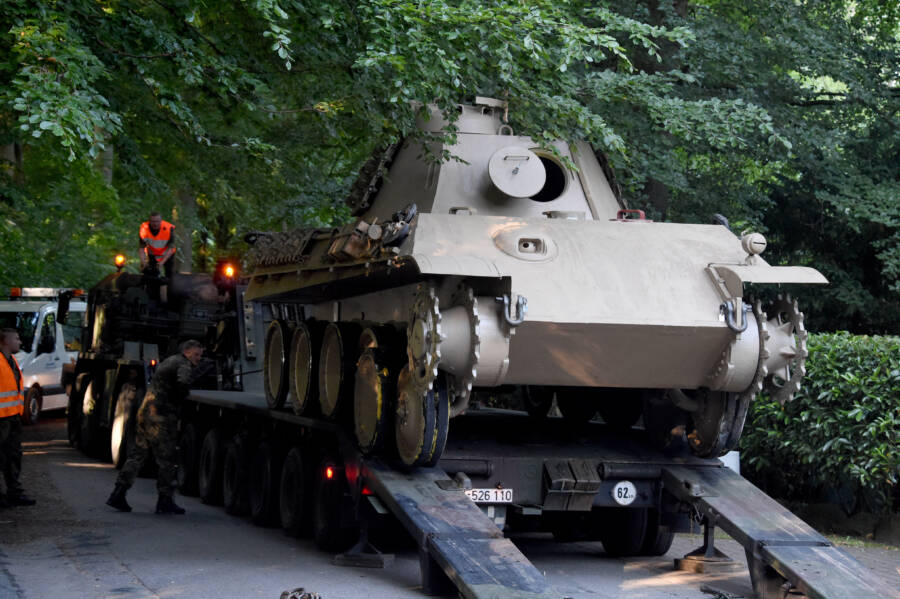 For decades, a German man has stockpiled Nazi weapons of war in his basement, including a 45-ton Panzer-V (Panther) tank and an 88-millimeter anti-aircraft gun. Now, a German court has given him a 14-month suspended sentence and fine of about $300,000 for the arsenal, which was seized in a raid in 2015.

While it takes some effort for German citizens to legally buy and carry loaded firearms, it’s entirely prohibited to own any weapons of war. According to Insider, the man violated the Weapons Control Act by possessing military-grade weapons. His lawyers, however, argued that because most of his collection was non-functioning, he could not be charged.

The man, identified in court documents as Klaus-Dieter F. from Heikendorf, had also amassed a torpedo, 70 rifles and machine guns, more than 1,000 rounds of ammunition, and an unspecified number of semi and fully automatic pistols.

German authorities were initially alerted to the hoard in 2005 when a home inspection revealed much of the collection. But a debate about legality and licenses stalled any action for a decade. 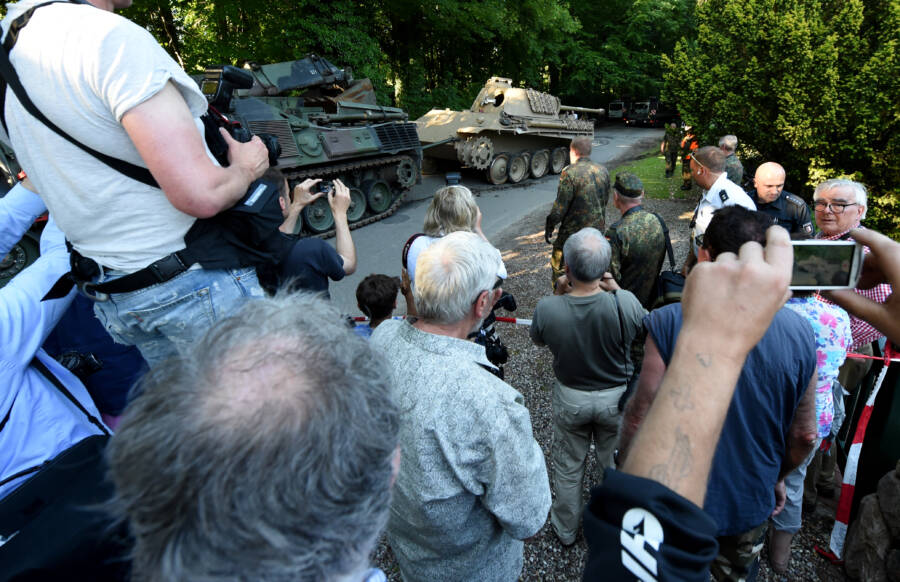 Carsten Rehder/Picture Alliance/Getty ImagesResidents of Heikendorf watch the tank being removed from the retiree’s property.

It wasn’t until 2015 that an investigation into stolen Nazi art led to a raid on Klaus-Dieter F.’s house that ended in the seizure of thousands of pieces of Nazi weapons and artifacts.

In addition to the weaponry, investigators discovered a hoard of Nazi memorabilia, including a bust of Adolf Hitler, mannequins with Nazi uniforms, swastika pendants, and lamps shaded with the rune symbols of the SS (or “Schutzstaffel”), Nazi Germany’s paramilitary squadron.

Officials also encountered a statue of a naked warrior wielding a sword, which was made by Hitler’s favorite sculptor Arno Breker and formerly stood outside Hitler’s Berlin chancellery.

According to the BBC, it took 20 German soldiers nine hours to remove the tank from the basement. They had to use an armored Bergepanzer 3 recovery vehicle — typically used in wartime to retrieve broken down tanks from the battlefield — to haul it away. 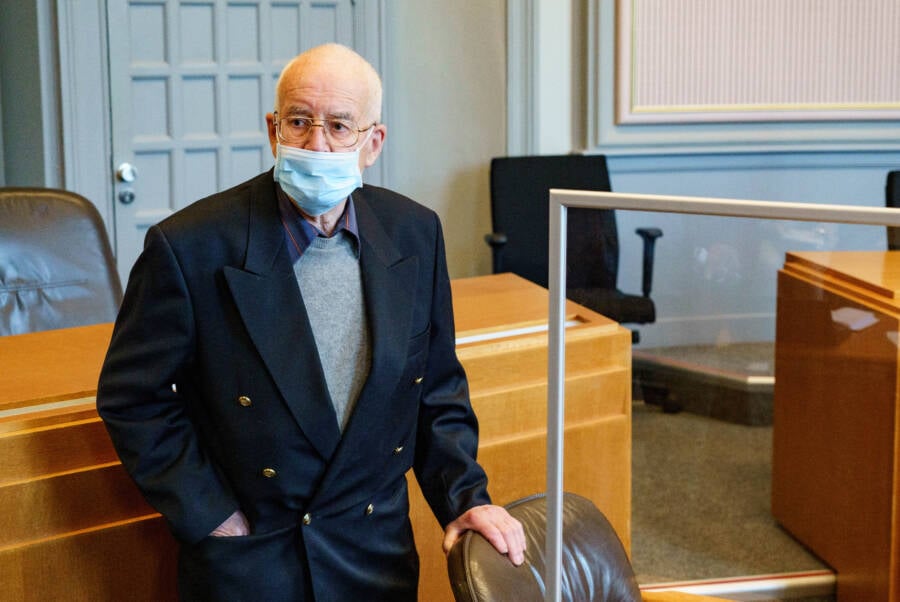 Axel Heimken/Picture Alliance/Getty ImagesIdentified only as Klaus-Dieter F., the 84-year-old once used the tank as a snowplow during a particularly difficult winter.

The court ordered Klaus-Dieter F. to sell or donate the tank and anti-aircraft gun to a collector or museum within two years or face more penalties.

According to his lawyer, a U.S. museum is interested in acquiring the tank, and several German collectors have expressed interest in the other artifacts.

According to locals, the tank was an open secret, and the man even used it as a snowplow once during a particularly harsh winter shortly after acquiring it from an English junkyard.

“He was chugging around in it during the snow catastrophe in 1978,” Heikendorf mayor Alexander Orth said in 2015.

“I took this to be the eccentricity of an old man, but it looks like there’s more to it than that.” 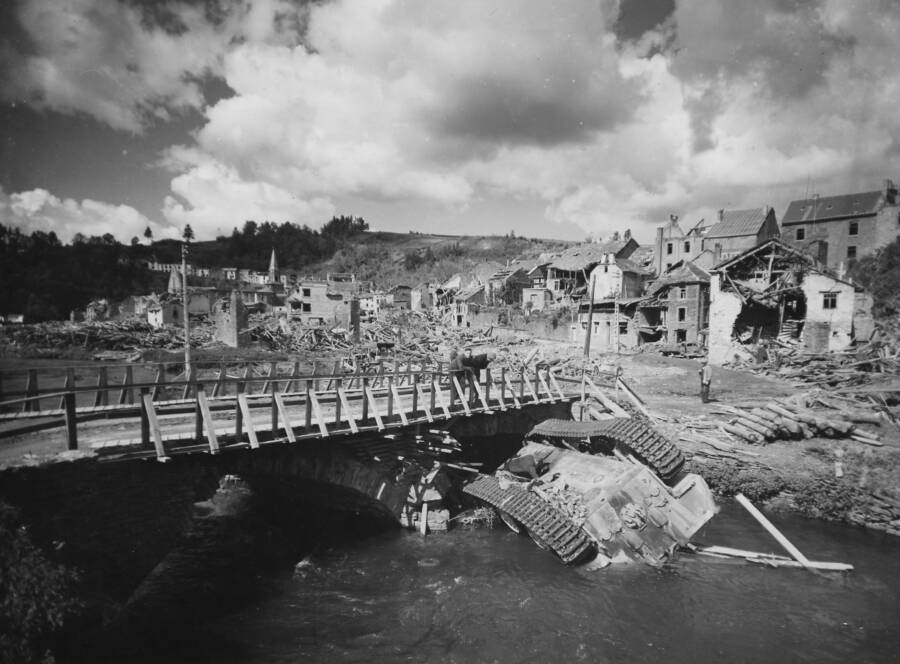 Purchased by Klaus-Dieter F. as scrap in the 1970s, the historic vehicle is one of only 12 known units still in existence. According to Popular Mechanics, that likely makes it worth millions of dollars today.

The Panther tank, or “Panzerkampfwagen V,” was one of the most advanced tanks of the entire European conflict. Covered in steel armor, Panther tanks were originally fitted with two 7.92-millimeter machine guns and one 75-millimeter turret.

Six thousand units were manufactured during Hitler’s reign, with only half of the remaining dozen today in any semblance of working condition.

And, with one collector selling a slightly inferior Panzer IV for $2.5 million in 2014, it appears this particular model could fetch substantially more on the market today.

After reading about the German man who kept a Nazi tank in his basement, learn about the collector who found $2.4 million in gold bars in a tank he purchased on eBay. Then, read about the stolen Nazi silver found buried at a 14th-century castle in Poland.