Knickers has become an overnight internet sensation because of his extreme size. 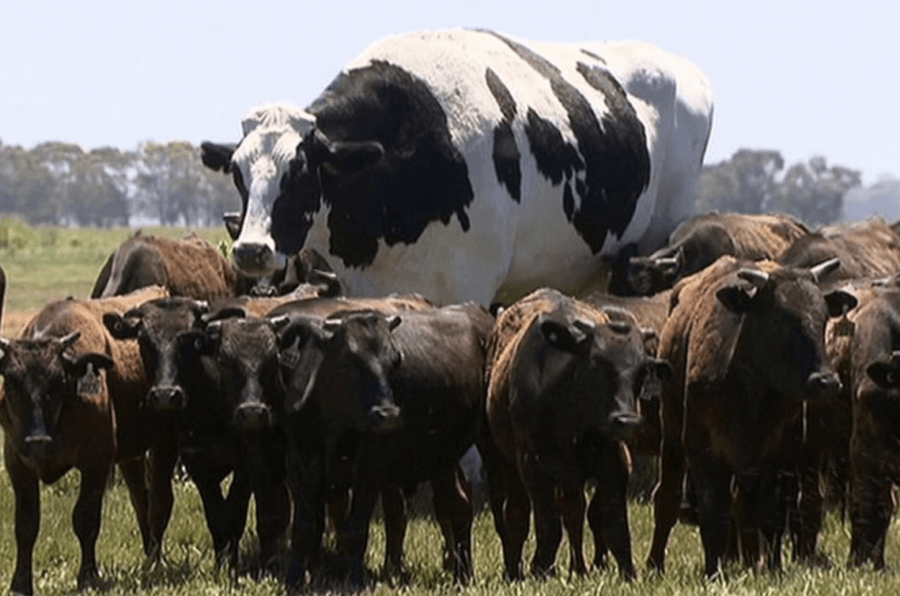 A massive cow in Australia has sent the internet ablaze over its larger-than-average size, but more than that, the 3,000-lb steer is (according to local butchers) simply too big to be handled at the slaughterhouse.

Knickers, the cow fit for a Football field, lives on a farm in the town of Myalup in Western Australia. He’s believed to be the largest living cow in the whole of Australia and stands over six feet tall and is as dense as an average-sized family car.

To be fair, Knickers is not technically a cow. He’s actually a steer, which is a male bovine that has been neutered. However, Knickers does still belong to the cattle family of animals, which are collectively and commonly referred to as cows.

7-year-old Knickers is nearly six feet and four inches tall, which is as tall as NBA star Michael Jordan. He weighs about 1,400 kilograms. Converted to U.S. units, the cow weighs over 3,000 pounds or 1.4 U.S. tons.

Knickers is a Holstein-Friesian, which is the black-and-white breed of dairy cattle that people most commonly think of when the word “cow” comes to mind. To put Knickers’ size into perspective, Holstein-Friesians typically weigh around 1,500 pounds and stand about four feet, eight inches tall. 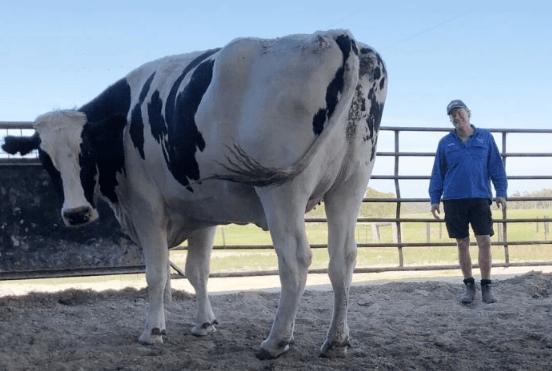 TwitterKnickers and his owner Geoff Pearson.

Even Holstein-Friesian males only ever reach about five feet 10 inches tall and weigh a maximum of about 2,200 pounds. Knickers clearly has his breed’s size beat by an unbelievable landslide.

To make Knickers all the more alluring, he also happens to live with a heard of cattle that all appear to be a different species than him, though they’re not. Knickers’ companions are not only much smaller than he is but are all either brown or black, making Knickers stick out even more than he already does.

Apparently, Knickers was very close to the chopping block at a local slaughterhouse. Butchers estimated that Knickers would yield 1,400 pounds of trimmed usable beef, which is enough meat for 450 cuts of steak and 815 pounds of ground hamburger meat.

But Knickers’ extraordinary size wound up sparing his life after butchers said that he is simply too large for them to handle.

“He was too big to go into the export plant’s chain,” said Knickers’ owner Geoff Pearson said. “We have a high turnover of cattle, and he was lucky enough to stay behind.”

Standing 6 feet, 4 inches tall, a giant Australian cow called 'Knickers' has been saved from the abattoir after being deemed too big to fit into the processing facility, Australian media reported. pic.twitter.com/Tu3Iv1GLr9

The fact that Knickers’ life was spared due to his size was originally why this otherwise local story was reported in the first place. But the remarkable pictures of Knickers in perspective with the other cattle at Pearson’s farm caught fire on the internet, and Knickers became a social media sensation overnight.

Pearson, for one, can’t believe the hype.

“It’s out of control,” he said in a phone interview. “I didn’t expect it to go as far as it has. I’ve been called every 10 minutes since four o’clock this morning.”

Pearson chalks up Knickers’ newfound fame to the fact that you simply just don’t see a cow of this size every day.

“I suppose it’s just a different topic,” he said. “It doesn’t happen every day, you don’t get a steer of that size in normal production systems, and people like animal stories.”

Naturally, people have a lot of questions about Knickers, namely exactly how he got so enormous.

It’s a question that’s stumped Knickers’ owner himself: “We don’t know that ourselves,” Pearson says. “It’s just a freaky thing.”

Knickers’ size may be a feat for the internet to enjoy, but it’s had a profound impact on the steer’s life, as it’s steered him clear of the chopping block. Indeed, in the case of Knickers, the butchers’ eyes were not bigger than their stomachs.

Next, check out these 10 animals myths that you’ve mistakingly believed. Then, learn about these 13 interesting animals that you didn’t know existed.