The Man Behind Bad Luck Brian

Kyle Craven, the face of Bad Luck Brian, shares what it's like to go viral, which of his own memes he likes best, and the one thing he'd do differently. 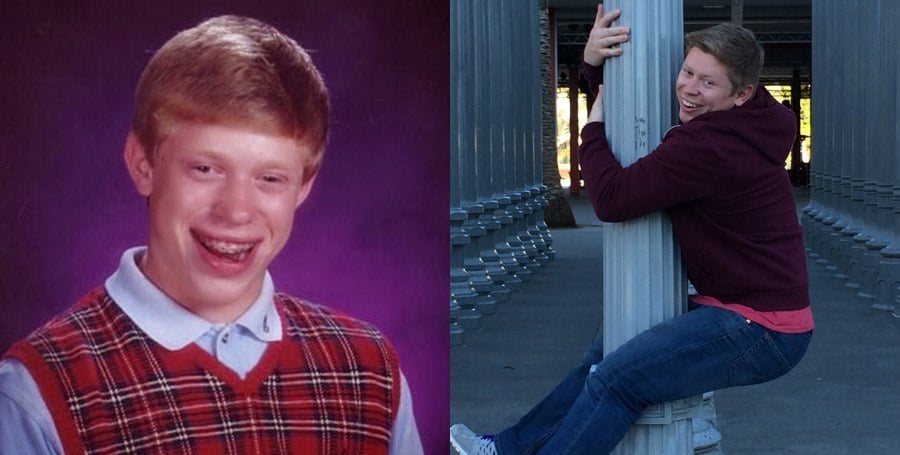 ONE MORNING IN JANUARY 2012, 22-year-old Kyle Craven woke up famous. He didn’t feel any different — or even know he was famous. And he wouldn’t know until he listened to a voicemail from his friend.

“Hey man, no big deal, I just made you Internet famous.”

With the help of Reddit, one old photo, and Craven’s longtime friend, Bad Luck Brian was born and Craven’s shiny sophomore face trended its way into fame overnight.

Today, Craven lives in his hometown of Cuyahoga Falls, Ohio with his wife and dog, and works as a manager at his father’s commercial construction company. And, unlike many memes out there, he accepts and enjoys his Internet fame.

“I don’t mind at all,” Craven said. “I think it’s odd when a lot of the other memes I meet are trying to keep it all hush-hush.” 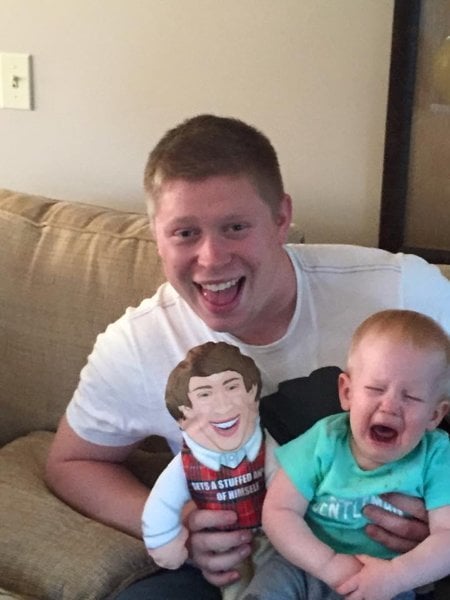 “What are you talking about, ’embarrassed’?,” Craven — who has met Overly Attached Girlfriend, Good Girl Gina, and Sheltered College Freshman — said. “I thought mine was the worst out of all of them, given what people write about on Bad Luck Brian. It is, ‘shits his pants’ all the time or ‘gets erection in class.'”

Still, to Craven some jokes are funnier than others. “Anyone can make a ‘shits his pants’ joke and it’s funny, but it isn’t clever,” Craven said. “The one I always love is, ‘Parents get divorced, No one fights over custody.'”

But as much as Craven doesn’t mind the fame, he’s got one good reason to be glad that the face paired with so many vulgar jokes can hardly be recognized as his: A large number of his construction company’s projects are church buildings. “Thank God I don’t look like that anymore,” he said, “because I’m sure I would have lost some clients.”

Business concerns aside, Craven hasn’t been too wounded by the whole ordeal. That’s likely because the original photo which gave impetus to the meme started as a joke — and a joke he was in on — from day one.

“I took the picture as a joke back in the day,” Craven said. “I didn’t really look that awful. I rubbed my eyes, made the goofy smile, wore the vest and all that.”

Photos courtesy of Kyle CravenEven when not taking the joke photo that would become Bad Luck Brian, Kyle Craven was a jokester in his adolescence.

Craven walked away from that particular school picture day feeling pretty pleased. Unfortunately, his principal felt differently and the photo never made it into the yearbook.

“She pulled me out of class and told me to go to retakes,” Craven said. Apparently, “it was too bad of a picture for the yearbook.”

“I’ve seen her [the principal] about ten times since I’ve graduated and every other teacher at my high school knows about it and know how big it is,” Craven said. “They all talk to me about it. But she is the only one who never has. I think she is a little salty.”

“I didn’t really look that awful.”

But whatever Craven’s principal thought of the now infamous photo, Reddit eventually proved to have different standards.

When the photo first took off on Reddit, Craven did what he could to take advantage of the opportunities given to him. In addition to interviews and promotions, there were, according to Craven, “T-shirt deals, a stuffed animal, action figure, and even a board game in the works for a bit.

They didn’t go over too well, which Craven attributes to missing the boat on social media and not bringing things to scale soon enough.

“These little novelty items are kind of hit or miss,” Craven said. “You’re not going to make a ton of money off of them. Maybe a thousand here and there, but unless you’re selling like a million t-shirts a year, you aren’t making great money… I let that all die off because I had to make a choice between my ‘weekend project’ and my real job running a construction company. I haven’t been focusing a lot on [Bad Luck Brian] the past few years.”

That’s perhaps because he didn’t capitalize on the meme from the get-go, which he would change if he were to relive the experience. “From day one, I would have gotten the Twitter handle and the Facebook page,” Craven said. “We didn’t see it coming back then, but it would have been nice to have @BadLuckBrian or the Facebook page.”

Lack of money and longevity aside, he still thinks the culture of sudden Internet fame is great.

“You think back 30 years ago to who was famous and they are movie stars or the president. It wasn’t ‘that guy who made that one video.’ It is a cool part of the younger generations: They love social media and Internet content. It’s amazing how many younger people you talk to are talking about Instagramers and YouTubers. It’s broadening the category of being a celebrity today. And there’s a lot of money to be made with that too — it’s a great thing.”

Even Craven’s parents have now taken that outlook. “They all thought it was the stupidest thing in the world and all hated it, thought it was ridiculous,” Craven said. “My mother is a middle school teacher and she didn’t really understand how big it was until a student walked into her class with a picture of me on their T-shirt.”

Craven then tried to explain it to them — and, appropriately, with bad luck. “And then once they finally grasped the full extent of it, they were really worried – especially my dad in our line of work,” Craven said.

“But they have since come full circle and now think it’s pretty remarkable. They like to brag about their son being Internet famous.”

Enjoy this interview with Kyle Craven, a.k.a. Bad Luck Brian? For more incredible tales straight from the people who lived them, read what it’s like to be ambushed by the Taliban or to serve as New York’s “Mother Pigeon.”