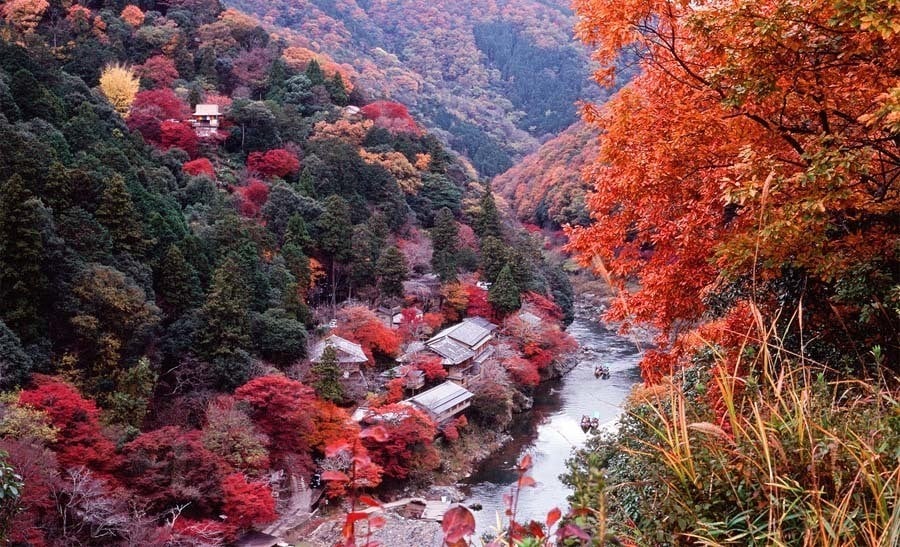 The Kamo River in Kyoto is a popular location for boating and hiking. During summer months restaurants open their balconies that look out over the river, and many walk the trails that run along the river’s edge. Source: All World Towns

They don’t call Kyoto the “city of 10,000 shrines” for nothing. The ancient cities of Nara and Kyoto are located in what’s known as Japan’s Kansai region, where many emperors resided long ago. Immaculate shrines drape the region in timeless grandeur, and are made that much more splendid courtesy of the region’s natural beauty.

If you can’t make it to the former Japanese capital or the surrounding Kansai region, explore it in the photos below: 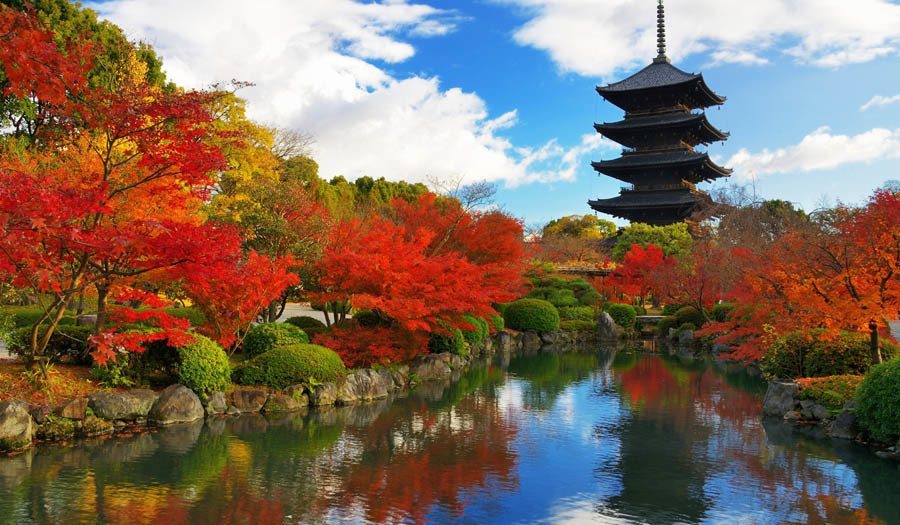 To-ji, or “East Temple” features a five story pagoda looking out over a crystal clear reflecting pool. To-ji dates back to 796, and once stood beside a partner temple - Sai-ji, or “West Temple.” There is now a public park where the West Temple once stood. Source: All World Towns 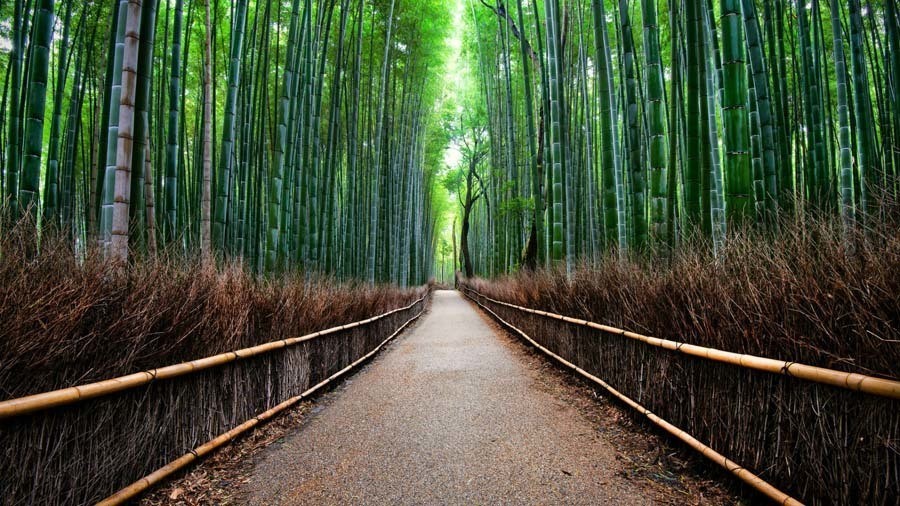 The Arashiyama Bamboo Grove in Kyoto is one of the area’s top tourist attractions. It's not hard to see why: the bamboo pillars extend into the sky, giving the sunlight trickling through a green, mystical appearance. Source: Zastavki

The pagoda at Daigo-ji Temple was built in 951 AD, and is the oldest standing building in Kyoto. The Shingon Buddhist temple is one of the world’s top spots when it comes to viewing vibrant fall foliage as well as cherry blossoms in the spring. Source: All World Towns 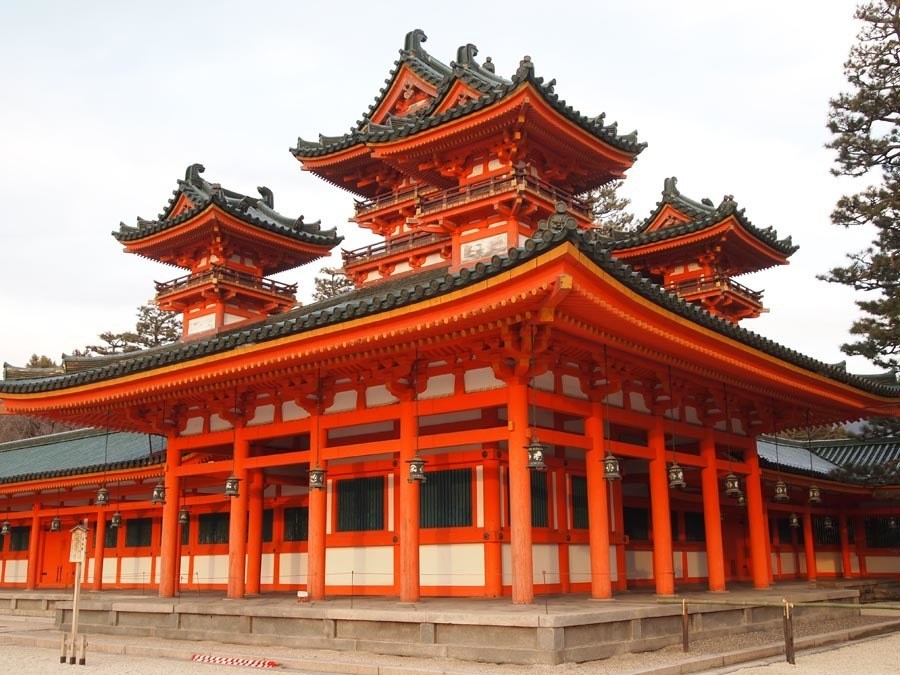 Founded in 1895, the Heian-jingu shrine has been designated as a Beppyou Jinja, which is the highest rank attainable by a Shinto shrine. Annual festivals are held at the site to honor the memory and legacy of Emperor Kōmei and Emperor Kammu. Source: Catbird In Kyoto 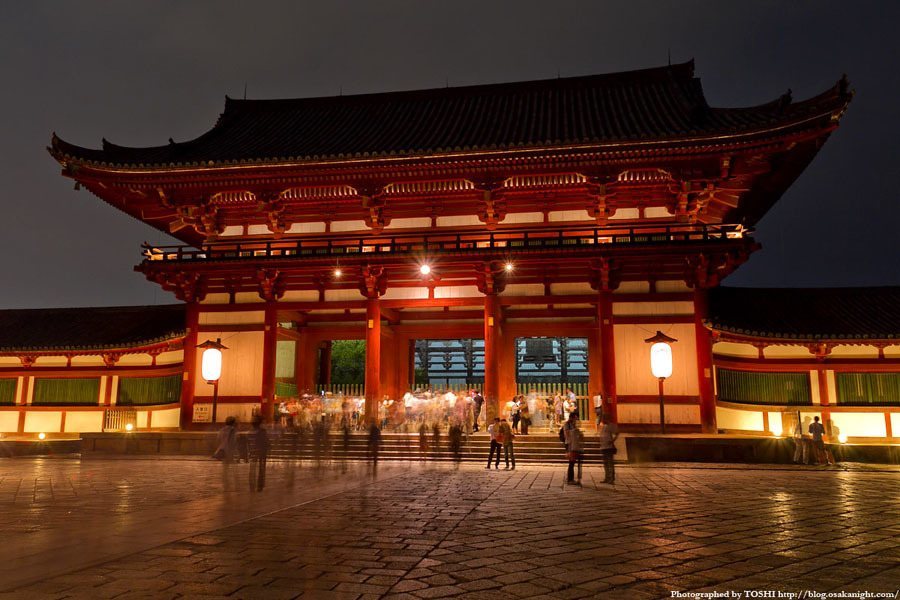 Tōdai-ji was once one of the Seven Great Temples of Nara. This Buddhist temple is home to the world’s largest bronze statue of Buddha. Source: TOSHI 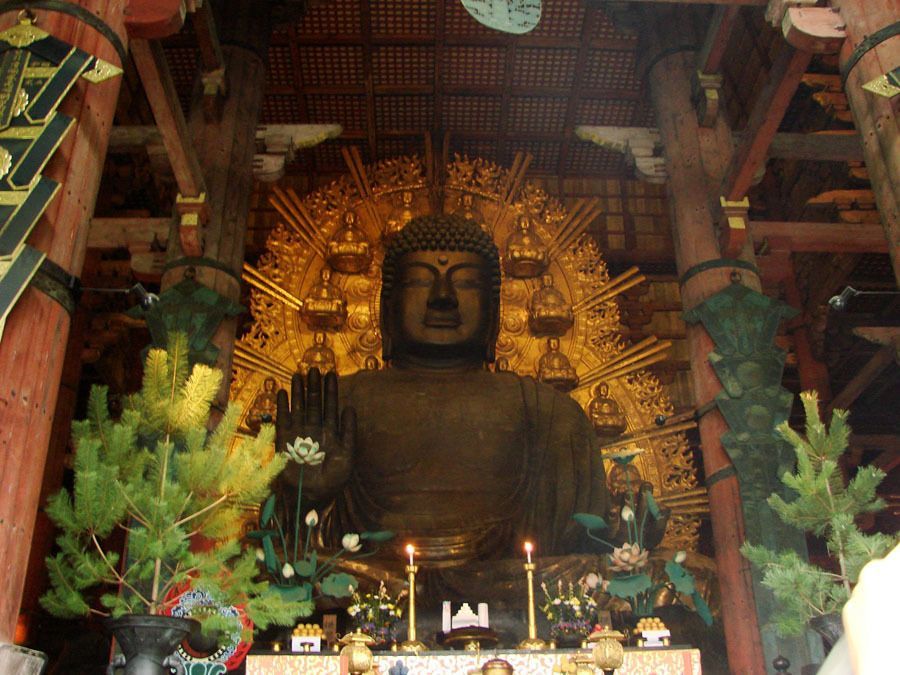 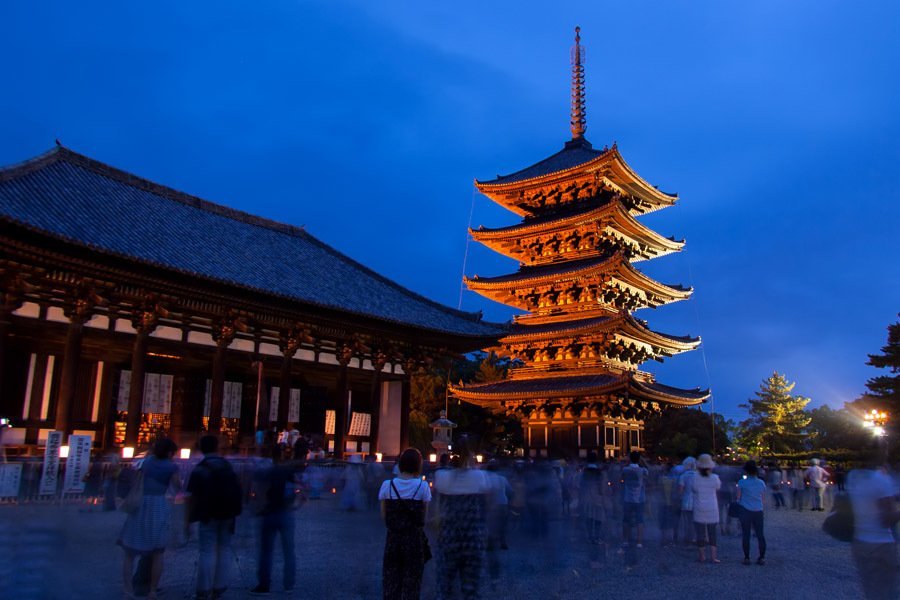 Another of the former 7 Great Temples of Nara, Kofuku-ji was completely dismantled in 710, and moved to its current location from Fujiwara-kyō. The pagoda shines against the night sky when lit. Source: Osaka at Night 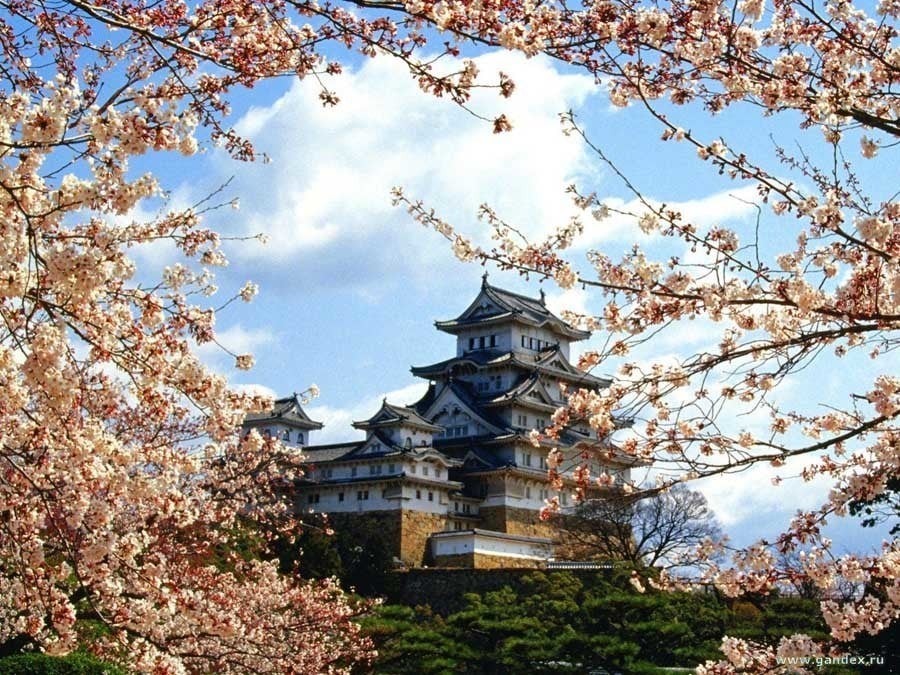 Himeji Castle sits upon a hilltop surrounded by cherry blossoms. It is the largest castle in Japan, built in 1346 from the remains of a dismantled fort atop of Himeyama hill. Source: Wallfon 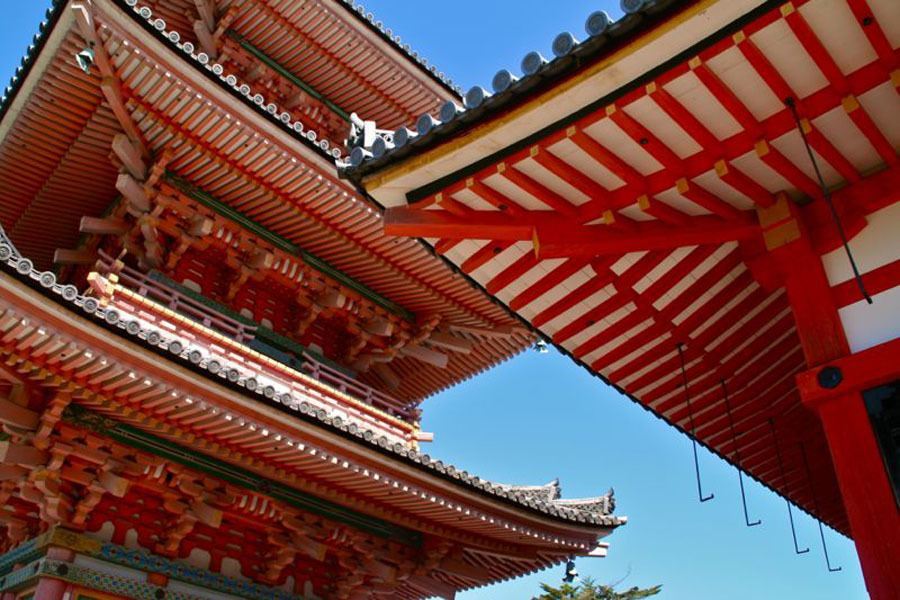 Established in 778, Kiyomizu-dera is a Buddhist temple that lies halfway up Otowa Mountain in the eastern portion of Kyoto City. Source: Never Ending Voyage 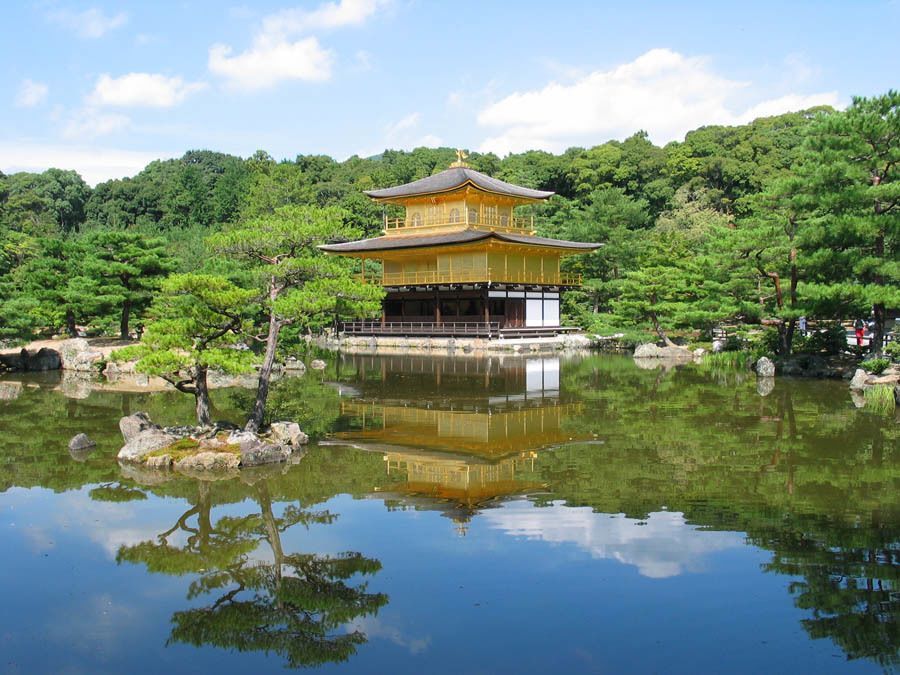 Kinkakuji Temple in Kyoto is known to westerners as the Golden Pavilion. Originally constructed by shogun Ashikaga Yoshimitsu in 1397, the structure was burned to the ground in 1950 by a novice monk who then attempted to commit suicide behind the building. The current temple was constructed in 1955 and is one of 17 locations comprising the Historic Monuments of Ancient Kyoto World Heritage Site. Source: Wikipedia 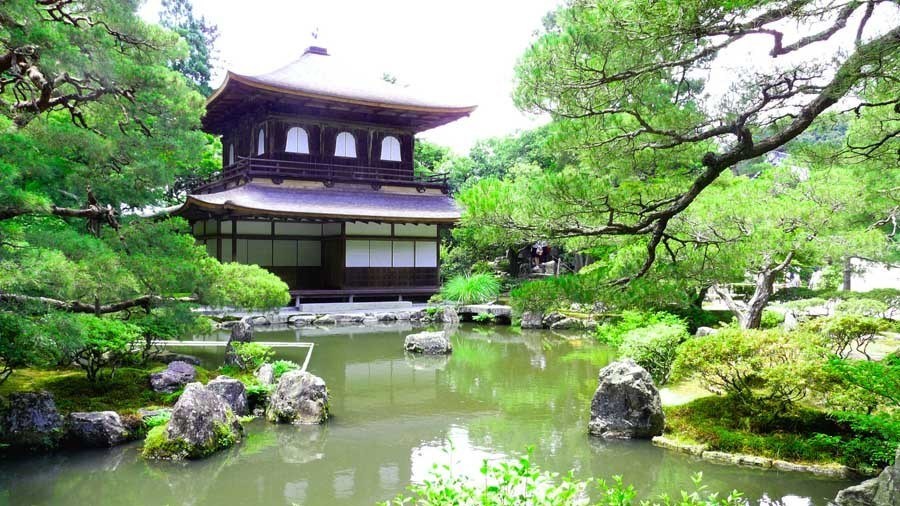 Ginkakuji Temple (also known as the Silver Pavilion) in Kyoto is as peaceful a location as there can be. The serene grounds are perfect for meditation. Source: Kaseito 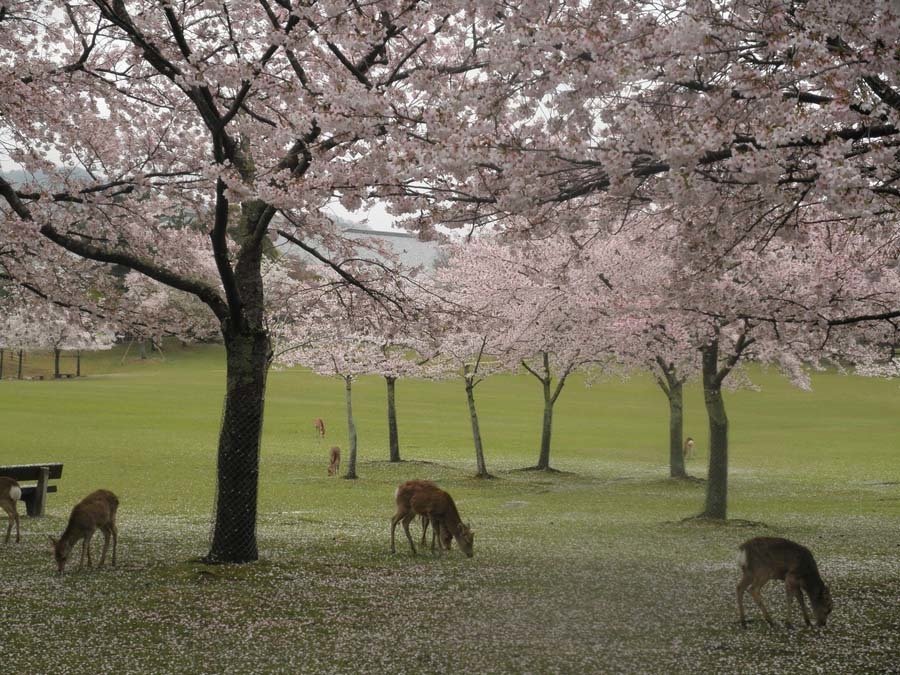 Nara Park is the home of several thousand spotted deer, or sika. The sika are revered in Nara and are believed to be messengers of the Shinto gods. The deer have become so used to human interaction that they will commonly eat from the hands of tourists. Source: Virtual Tourist 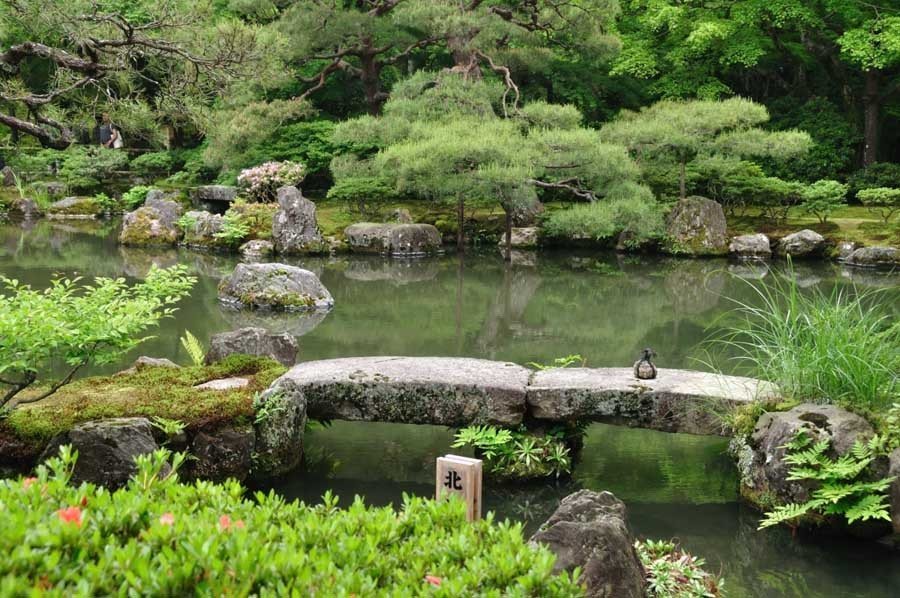 A stone bridge on the grounds of Ginkaku-ji Temple reaches across the pond. Source: Veni Vidi Zoom 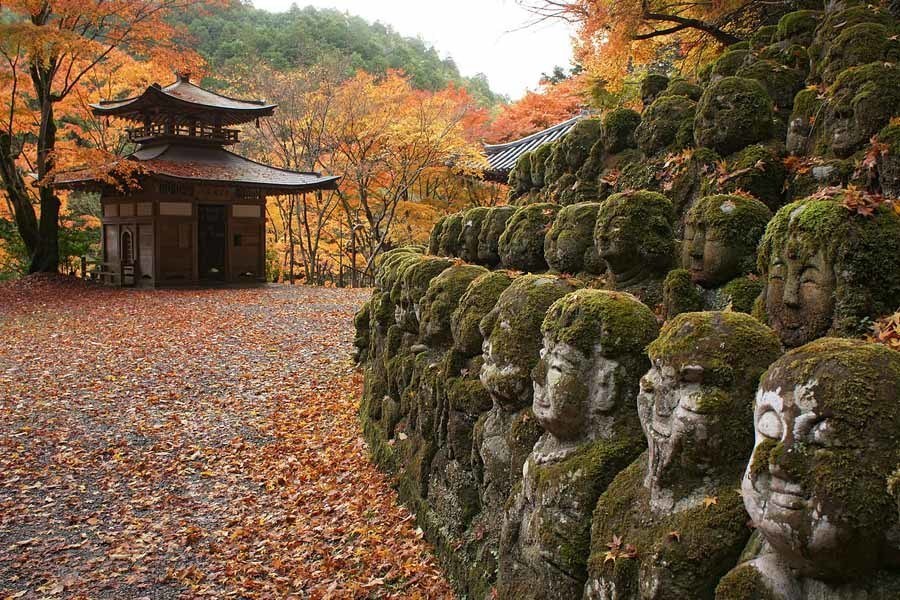 Otagi Nenbutsu-ji in Kyoto is known for its Rakan sculptures, which represent a person who has reached nirvana. Source: Wikimedia Commons/663highland 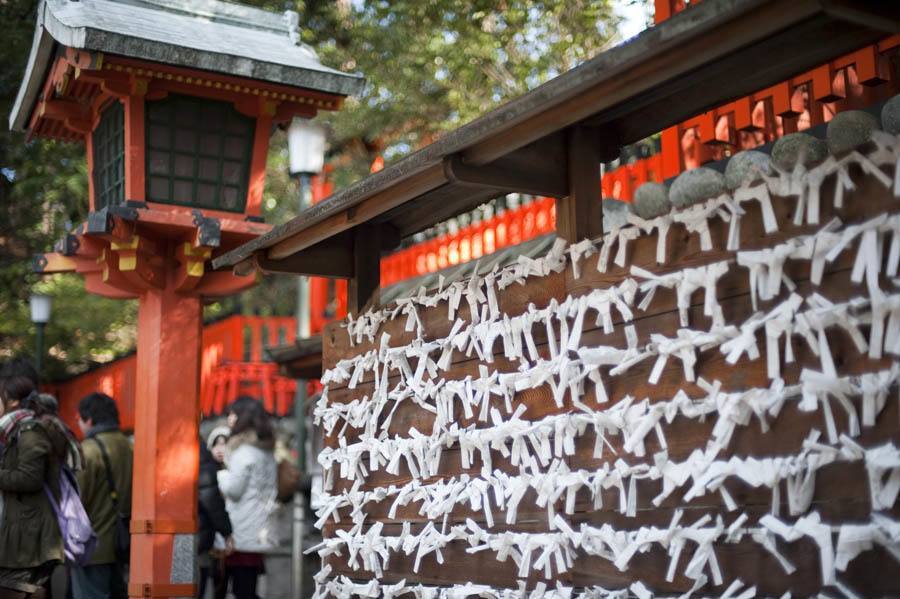 Omikuji are paper fortunes, much like those found in the fortune cookies of Asian restaurants. But unlike those Americanized fortunes, Omikuji can range from extremely good luck to extremely bad luck. If you obtain a negative fortune, there are locations at the shrines and temples to tie your fortune and avoid your bad luck. Source: Free Images Live 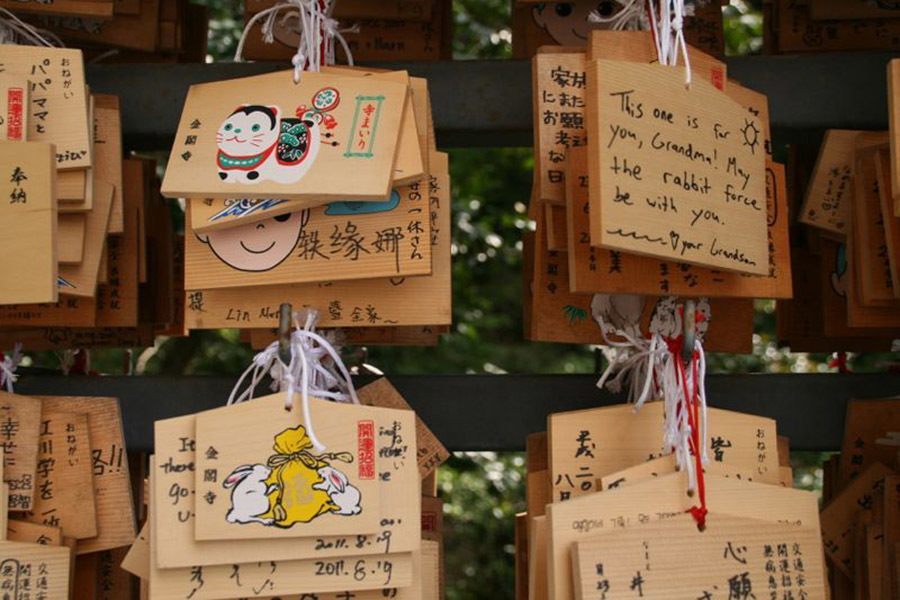 Ema are small wooden plates on which visitors leave wishes. Though most ema are written in Japanese, it is not uncommon to find other languages represented at the more popular temples. Source: Never Ending Voyage 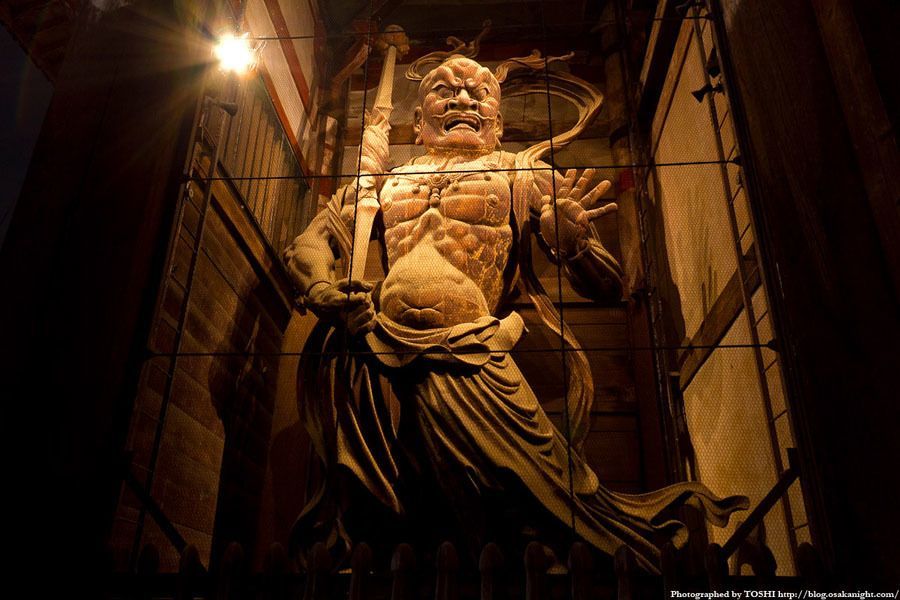 One of two Deva King statues which reside at Tōdai-ji temple. Deva are one of a number of non-human figures in Buddhism that have power surpassing those of humans, but are not worthy of worship. Source: TOSHI 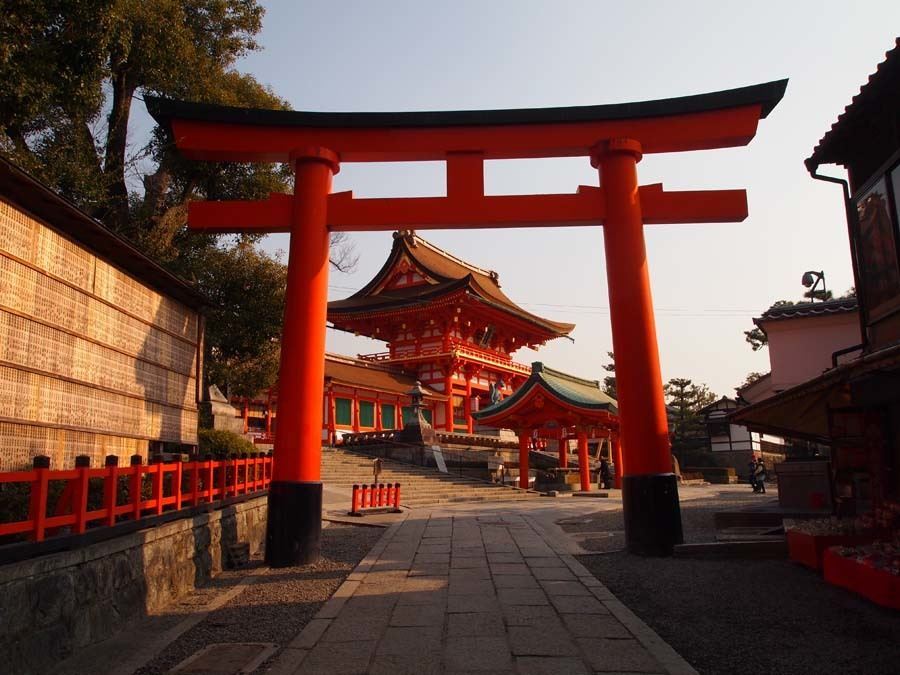 Fushimi Inari-taisha Shrine in Kyoto is the head shrine of the Inari. The main structure on the site was built in 1499. Source: Catbird In Kyoto 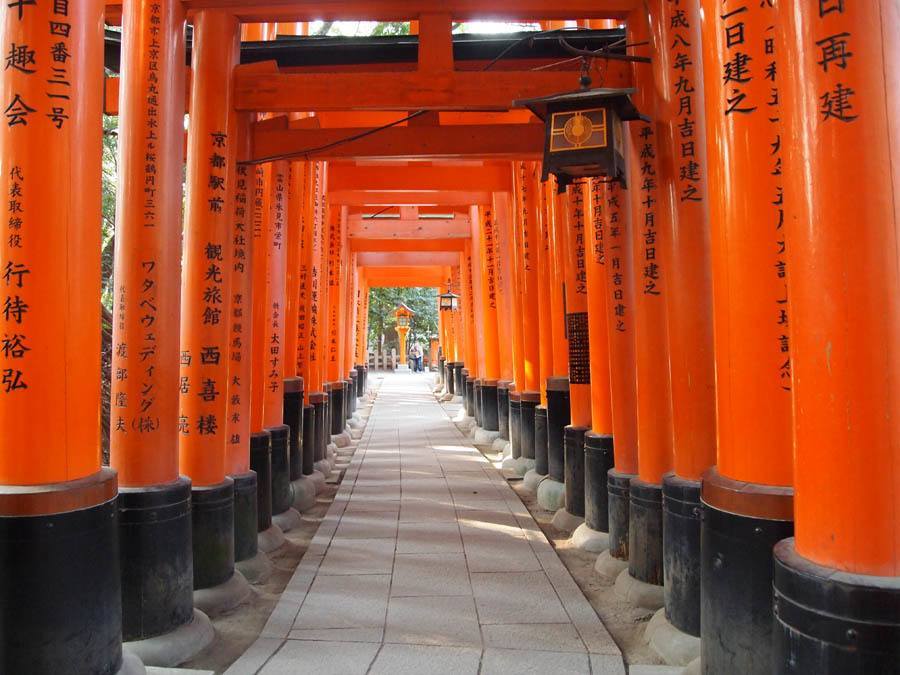 Torii are gates that are commonly found at the entrance of Shinto shrines. Each of the torii on the site of the Fushimi Inari-taisha have been donated by Japanese businesses, as Inari is known as the patron of business and merchants, as well as the god of rice. Source: Catbird In Kyoto

Likewise, these below videos by Osamu Hasegawa and Blue Eden offer stunning glimpses into the region's beauty: