The Story Of Kyron Horman, The 7-Year-Old Whose Disappearance Spawned The Largest Manhunt In Oregon History

After being dropped off at school by his stepmother early one morning in June 2010, Kyron Horman vanished — and has never been seen or heard from again.

Shortly after 8 a.m. on Friday, June 4, 2010, seven-year-old second grader Kyron Horman arrived at Portland’s Skyline Elementary School. It was the day of the science fair and he was setting up his project with the help of his stepmother.

Though a fellow student reported seeing him at 9 a.m. near the school’s south entrance, Horman did not report to any classes that day, nor did he board the bus later to come home. In fact, he has never been seen by anyone since.

This is the disturbing true story behind the disappearance of Kyron Horman. 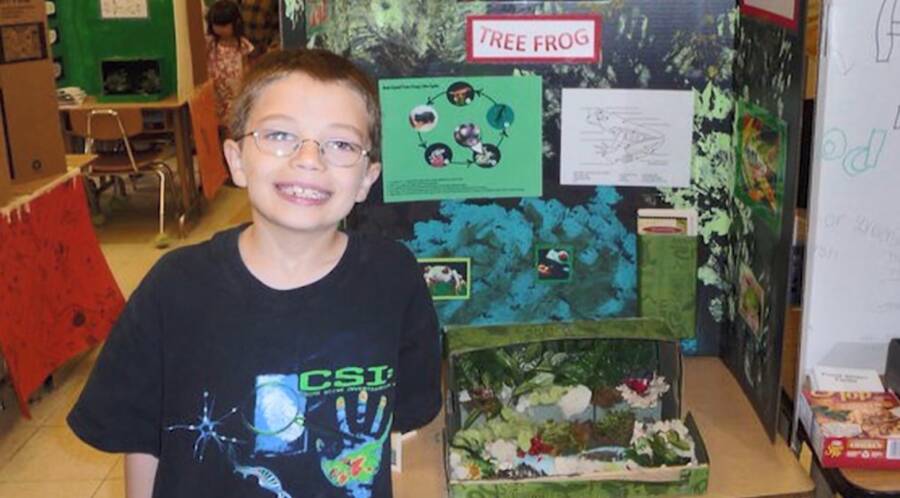 Ironically, Kyron Horman had a keen interest in forensic science. On the day he disappeared, he was wearing a “C.S.I.” t-shirt bearing the logo from the crime procedural show.

It was Horman’s stepmother, Terri Moulton, who was the last family member to see the boy alive as he walked down the school’s hallway to a class that Friday morning. But she failed a polygraph test on the day’s events twice, and she has since divorced Horman’s father — and has been named a suspect by court documents and her own lawyers.

Perhaps the most non-biased sequence of events on Horman’s last day come from a detailed timeline courtesy of The Oregonian, which actually put Moulton at two different grocery stores until 10:10 that morning. However, between then and 11:39 a.m., the stepmother has no alibi.

She claims she was driving rural roads with her infant daughter Kiara, trying to soothe her ear infection, before checking into a 24-Hour Fitness about 11 miles away at 11:39 a.m., where she stayed for an hour.

Then, at 1:21 p.m., Moulton claimed to have arrived home, logged into Facebook, and posted photos of Horman at school with his science project from that morning.

Then Kyron Horman’s father Kaine joined Moulton to meet the school bus at 3:30 p.m. — but Horman did not get off. When they drove to the school and found out that Horman had been marked absent all day, they had the secretary call 911 — and so began the largest missing persons search in Oregon history to date began.

Suspects Emerge Within Horman’s Own Family 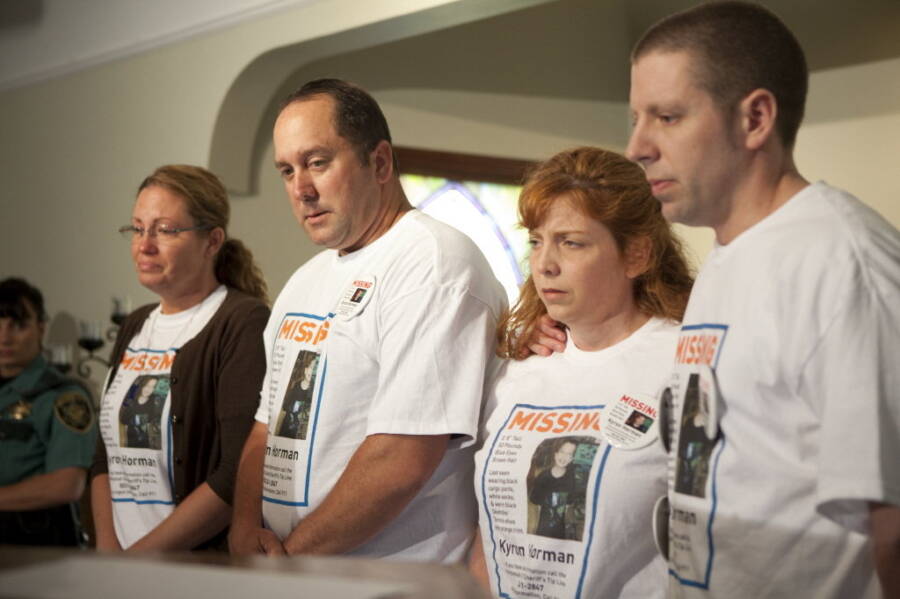 At the heart of the search for Kyron Horman is the relationship between his parents and stepmother. His biological parents, Kaine Horman and Desiree Young, divorced when the boy was small, and the two shared custody until Desiree became severely ill with kidney problems. She was forced to move back in with her parents and give full-time custody of Horman to Kaine until she fully recovered.

Kaine then married Terri Moulton, with whom he had a daughter, Kiara. But things apparently were not going too well in the marriage, according to emails that Moulton sent to her friends. After police showed her these messages, Young said the emails revealed that Moulton had “a severe hatred for Kyron.”

“She blames a lot of the marital problems between Kaine and herself on Kyron. It was a huge point of contention in their marriage and she had expressed in great detail her hatred for Kyron,” Young said. “I now believe, without a shadow of a doubt that not only is she capable of hurting Kyron, that it’s clear that she could have hurt him in the worst possible way.”

Initially, there was no real interest in Moulton as a suspect in Kyron Horman’s disappearance. Sources indicated that there was a probability of deception during her first polygraph, and gaps in the timeline she gave for the day Horman vanished.

Yet, none of these details amounted to anything more than suspicion — until about a month into the investigation when a bombshell was dropped.

Updates On The Kyron Horman Case 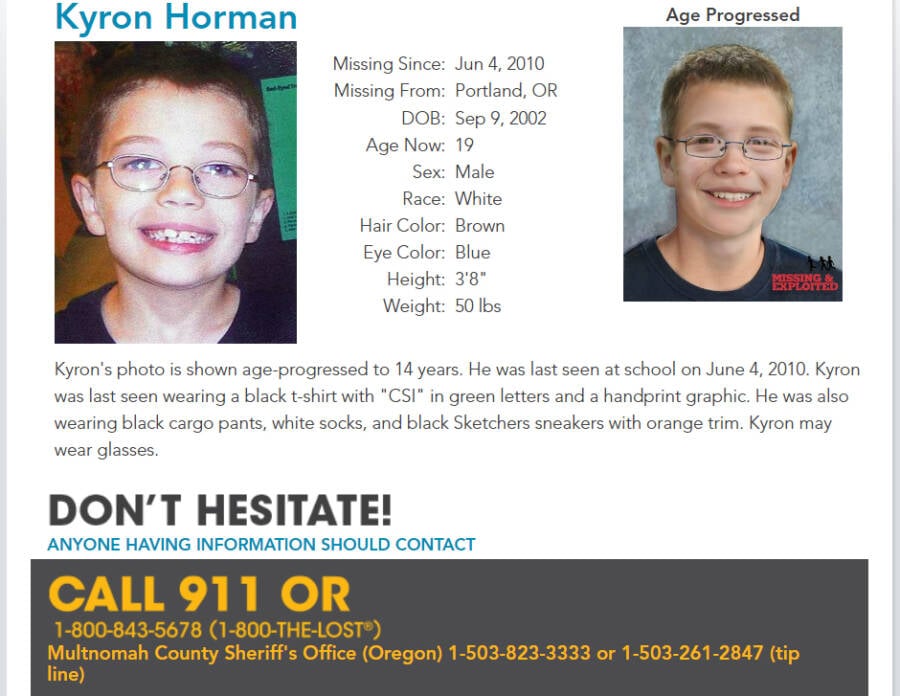 The National Center for Missing and Exploited ChildrenAn age-progressed photo of Kyron Horman. Today, he may or may not wear glasses, if he’s still alive.

For 10 days, Horman’s case was considered a missing person’s one. But then, investigators announced it was officially a criminal investigation.

In July 2010, a local landscaper who Moulton previously hired showed up at the police station, and he told authorities that about six months prior to Horman’s disappearance, Moultan Horman offered him money to kill her husband.

Detectives shared the landscaper’s account with Kaine, and he left the house on June 26 with the couple’s 19-month-old daughter. He promptly hired a family law attorney and filed divorce papers and a restraining order against Moulton.

Unfortunately, police have no other suspects, and there are little to no updates on the Kyron Horman case today. “They found no clues, they found nothing,” Horman’s father told KPIC news in 2015. “All the searches to date that I know of, both private and by the sheriff’s office or the search and rescue teams … there’s been no piece of evidence forensically linked to our case. So they found nothing. So he’s not around here … so the question is where is he?”

To this day, the Multnomah County Sheriff’s Department is still actively seeking any and all leads in the case. But without a breakthrough, the authorities are still no closer to solving Kyron Horman’s eerie disappearance even after more than a decade.

Next, read about Etan Patz, one of the original missing milk carton kids. Then, learn the story of Bobby Dunbar, the boy who vanished and came back as a different child.