On February 2, 2014, movie star Philip Seymour Hoffman was found dead in his New York City apartment with a syringe in his left arm. He was just 46 years old.

Philip Seymour Hoffman was a true actor’s actor. The native New Yorker sharpened his skills on Broadway before finding fame in Hollywood and never forgot that the craft itself trumped any accolades. An Academy Award-winning thespian, Philip Seymour Hoffman toiled on his work with the focus of a teacher who tragically knew that he would die too soon.

While he lived in the West Village of Manhattan with his partner Mimi O’Donnell and their three children, the 46-year-old Hoffman was found dead in an apartment two blocks away on February 2, 2014. The actor had initially taken the apartment to work on memorizing lines without any distractions, but he soon made his second home a refuge for his drug use.

Hoffman had first encountered problems with drugs in his early 20s, indulging in bouts of heavy drinking and experimenting with heroin. However, he quickly realized that he had a problem and checked into rehab for the first time at age 22. Remarkably, he stayed sober for 23 years, even as his star rose in Hollywood. But then, he fatefully relapsed in his mid-40s. 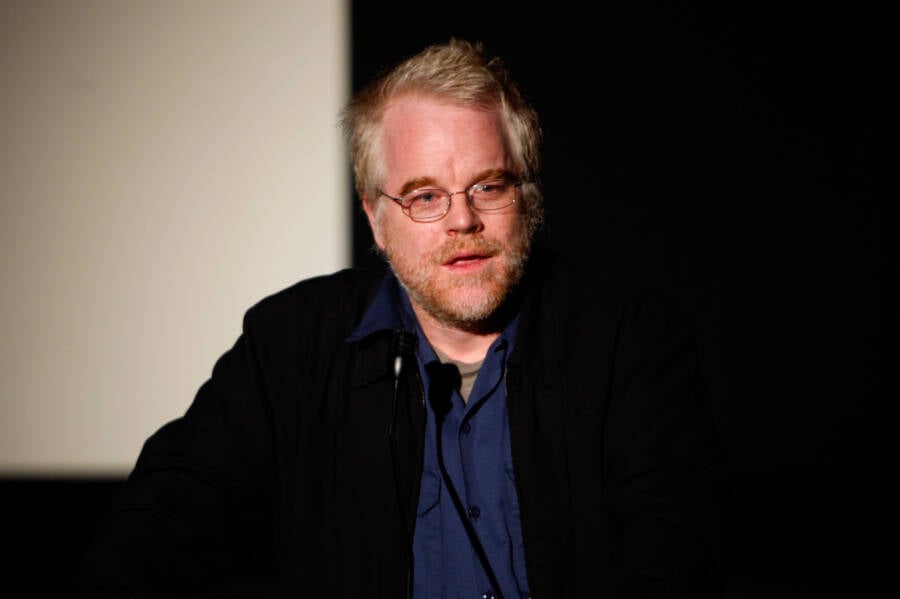 On the day that Hoffman died, O’Donnell knew that something was wrong when he didn’t come to pick up the kids when he said that he would. So she texted the couple’s mutual friend, David Bar Katz, to go and check on him. Katz and Hoffman’s assistant Isabella Wing-Davey then entered the apartment only to find Hoffman dead in the bathroom.

An autopsy would later reveal the cause of Philip Seymour Hoffman’s death: an acute mixed drug intoxication from a toxic “speedball” mixture of heroin and cocaine, as well as benzodiazepines and amphetamine.

This is the tragic true story of Philip Seymour Hoffman’s demise.

The Life Of Philip Seymour Hoffman

Philip Seymour Hoffman was born on July 23, 1967, in Fairport, New York. The second of four children, he was regularly taken to local plays by his mother. Hoffman was smitten by All My Sons at 12 years old but was primarily interested in wrestling until an injury forced him to reassess his interests.

Drawn to the stage, Hoffman starred in productions of Arthur Miller’s The Crucible and Death of a Salesman before graduating from high school. He joined the New York State Summer School of the Arts at 17.

According to Biography, Hoffman then continued his education at New York University. While he was a gifted student and graduated with a bachelor’s degree in drama in 1989, Hoffman also began abusing alcohol and heroin — which led him to enter rehab at age 22. He soon devoted himself to a life of sobriety as he continued to pursue a career as an actor. 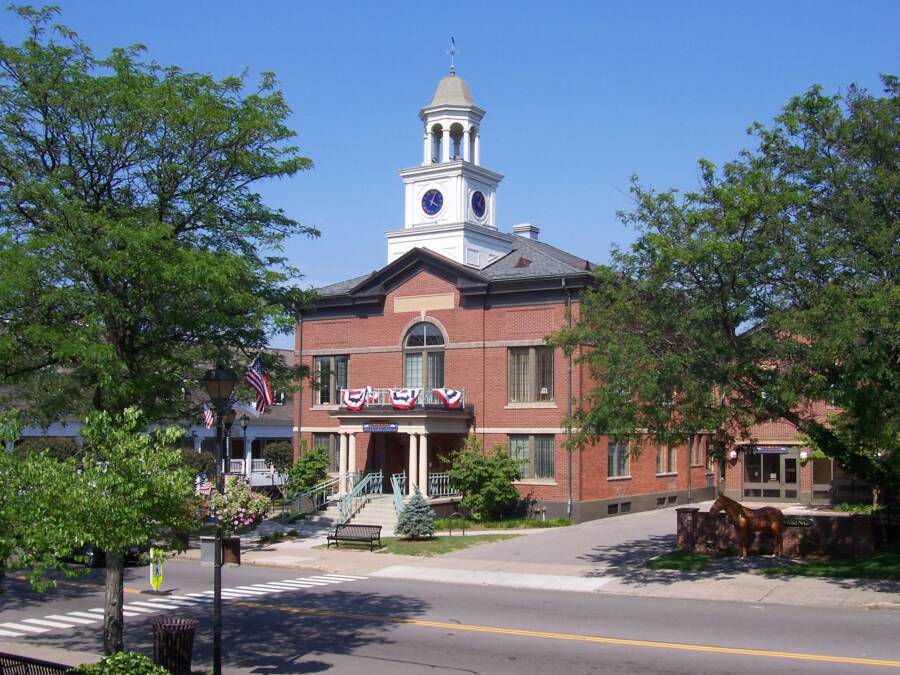 In 1992, Hoffman landed a role in the film Scent of a Woman alongside Al Pacino. It was a breakout opportunity that led to him getting cast in a number of roles in movies like Twister, When a Man Loves a Woman, and Boogie Nights. But even though his career had begun to take off on the big screen, Hoffman remained devoted to helping other actors with their craft.

Never forgetting his humble start in theater arts, he helped found the LAByrinth Theater Company in New York in the early 1990s. As Hoffman struck gold as an in-demand actor for supporting roles and character parts — often playing challenging roles like misfits and eccentrics — he personally donated hundreds of thousands of dollars just to help keep LAByrinth open.

As his professional life flourished, it seemed the same was true of his personal life. Hoffman met his partner Mimi O’Donnell, a costume designer, in 1999. The pair never married, but they had three children together.

Ultimately, it was Hoffman’s work ethic that made him a titan among his peers. He had the flu while filming Almost Famous, for instance, and used his spare time to research rather than rest. He helped fellow actors read lines, and most memorably, honored the everyman by giving him a voice with his characters. But sadly, these remarkable moments wouldn’t last.

Hoffman was hugely self-critical. He once vowed to move to France to teach English after being dissatisfied with a play that he had performed in. Even when he was offered the titular role in the movie Capote, he “wasn’t sure if I should do it.” While he won an Oscar for that performance in 2006, he never stopped strolling around the West Village for coffee and cigarettes.

“He wasn’t constructed in such a way as to care about that Oscar stuff,” said his friend Katz in an interview with Rolling Stone. “Did he appreciate it? Yes. He wasn’t contemptuous of awards. But getting the Academy Award, in some sense, to him would be the equivalent of getting an easy laugh.”

After Capote, Hoffman was nominated for Oscars for Charlie Wilson’s War, Doubt, and The Master. But through it all, he continued to shine onstage. In 2012, he returned to Broadway for a production of Death of a Salesman. It earned him his third Tony Award nomination but it also left him drained.

Shortly after the production wrapped, Hoffman told his loved ones that he was going to start drinking “in moderation” again — despite their protests. And before long, Hoffman had admitted to his partner O’Donnell that he had gotten his hands on prescription opioids “just this one time.”

As O’Donnell later recalled in an article for Vogue: “As soon as Phil started using heroin again, I sensed it, terrified. I told him, ‘You’re going to die. That’s what happens with heroin.’ Every day was filled with worry. Every night, when he went out, I wondered: Will I see him again?” By spring of 2013, Philip Seymour Hoffman had checked himself into rehab yet again. 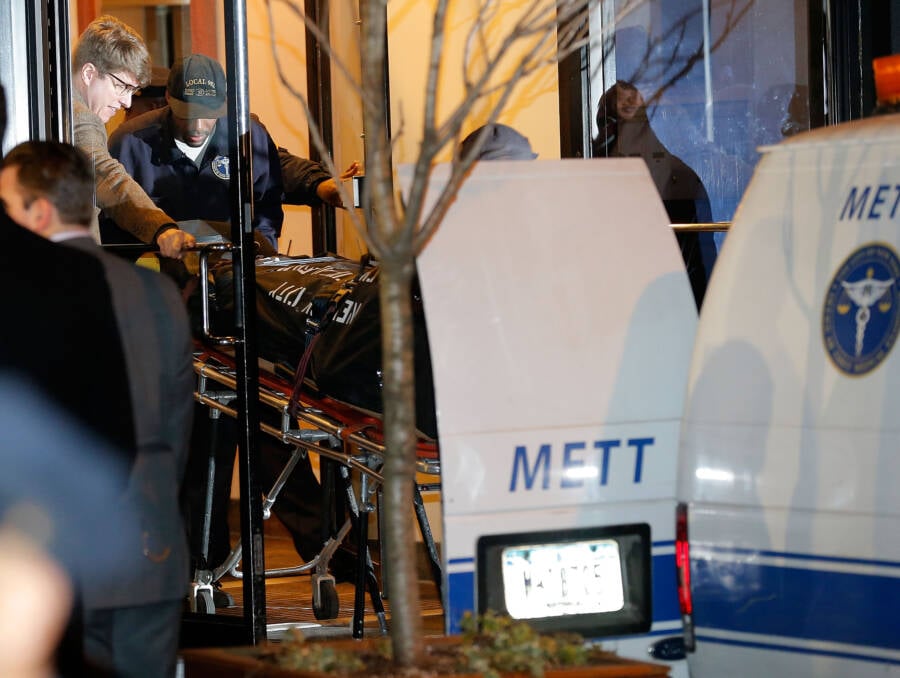 Jemal Countess/Getty Images Philip Seymour Hoffman’s body being removed from his apartment after his death on February 2, 2014.

Despite the rehab stint, Hoffman continued to struggle with his sobriety. He and O’Donnell made a difficult decision that it would be best for him to move into the apartment he had initially taken to rehearse lines — so that his young children wouldn’t feel uncomfortable as he battled his addiction.

Though the family saw each other as often as possible, it was clear at the end of 2013 that Hoffman was relapsing again. By early 2014, the actor was photographed drinking alone in bars, often in a state of disarray. And on February 1, 2014, he withdrew $1,200 from a grocery store ATM and handed it to two men, who were immediately suspected of giving him drugs.

Tragically, just one day later, on February 2, 2014, Philip Seymour Hoffman would be found dead and alone in his West Village apartment, where he had lived just two blocks away from his beloved family. Dressed in shorts and a t-shirt, Hoffman had a syringe in his arm, according to The New York Times.

Katz and Hoffman’s assistant Wing-Davey were both horrified by the discovery, but Katz would later express skepticism about how many drugs were actually in Hoffman’s home at the time of his death. He was particularly doubtful about police reports that about 50 bags of heroin were found at the scene. Katz said, “I don’t believe those reports, because I was there. I didn’t go through his drawers, but I’d never known Phil to put anything in a drawer. He’d always put it on the floor. Phil was a bit of a slob.”

But as heartbroken as Hoffman’s friends and fans were by the news, no one was more devastated than his family. As O’Donnell put it: “I had been expecting him to die since the day he started using again, but when it finally happened it hit me with brutal force. I wasn’t prepared. There was no sense of peace or relief, just ferocious pain, and overwhelming loss.”

The Aftermath Of A Devastating Loss

Two days after Philip Seymour Hoffman was found dead, police raided the Little Italy home of jazz musician Robert Vineberg and found 300 bags of heroin. According to the New York Daily News, Vineberg admitted that he had sometimes sold the drug to Hoffman but hadn’t done so since October 2013. He was arrested but pleaded guilty to a lower level drug charge and received five years probation after it was revealed police never read him his rights.

On February 5th, the LAByrinth Theater Company held a candlelight vigil in Hoffman’s honor. That same day, Broadway as a whole dimmed its lights for one minute. Hoffman’s funeral at St. Ignatius Church in Manhattan on February 7th was attended by many of his industry peers, including Joaquin Phoenix, Paul Thomas Anderson, Meryl Streep, and Ethan Hawke.

Hawke would later memorialize Hoffman as such: “Phil was an unconventional movie star in an era where there’s no such thing as unconventionality. Now, everybody is gorgeous and has abs. And here you have Phil standing up, saying, ‘Hey, I got something to say, too! It may not be pretty, but it’s true.’ That’s why we needed him so badly.” 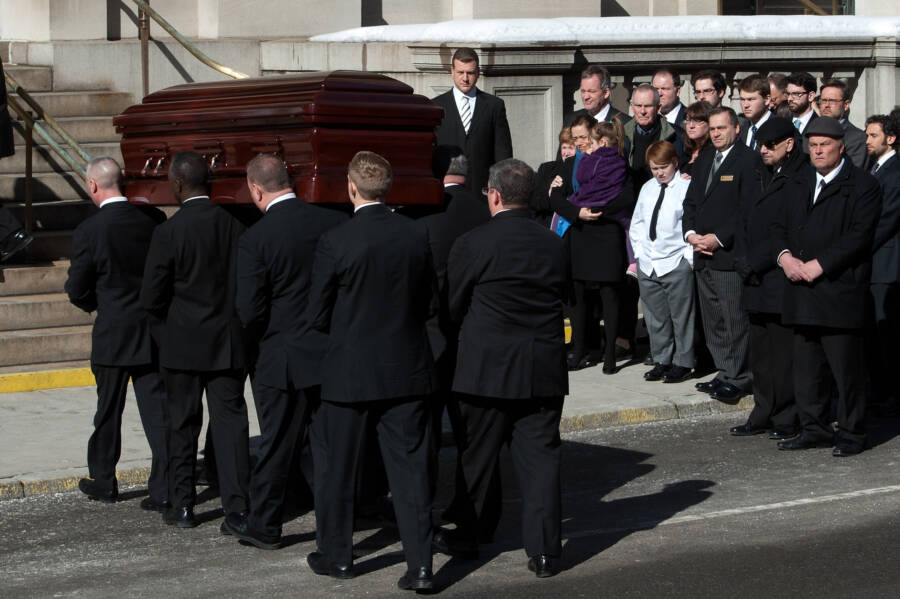 In the end, the work that Philip Seymour Hoffman left behind before his death still speaks for itself — and will likely be remembered forever. Filmmaker Sidney Lumet once compared Hoffman to Marlon Brando. And Cameron Crowe even said he was “the greatest of his generation.”

Despite his many struggles throughout his life, Hoffman had racked up 55 film roles in just 23 years — a testament to his unwavering work ethic. And he had earned a $35 million fortune, which he left to O’Donnell.

“I wonder whether Phil somehow knew that he was going to die young,” reflected O’Donnell a few years after his death. “He never said those words, but he lived his life as if time was precious. Maybe he just knew what was important to him and where he wanted to invest his love. I always felt there was plenty of time, but he never lived that way.”

After learning about Philip Seymour Hoffman’s death, read about Marilyn Monroe’s mysterious demise. Then, learn about how Heath Ledger died.