Located in Bend, Oregon, the last Blockbuster location on Earth is continuing to compete with Netflix and making changes to weather the COVID-19 pandemic. 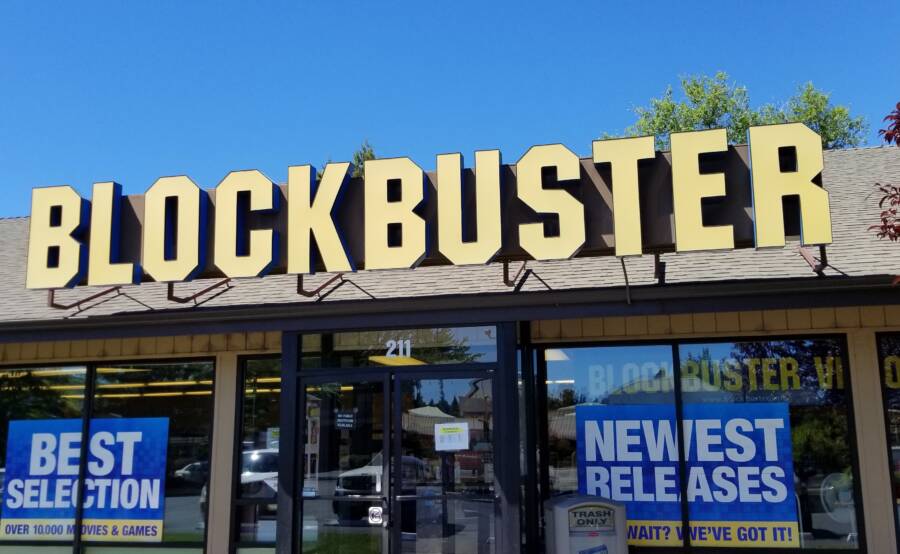 In the land of movie rentals, Blockbuster Video once reigned supreme. The colossal corporation had 9,000 stores and 60,000 employees at its peak in 2004.

As time passed, however, it became clear that Blockbuster was built for an era that was quickly fading. As online streaming flourished, the world simply no longer demanded physical media.

Before its decline began, Blockbuster had the chance to buy the company that would more or less replace it. In 2000, Blockbuster turned down an offer to purchase a fledgling Netflix for $50 million, deeming the young business fruitless.

As the two companies then vied for marketshare, a years-long battle ensued. When the dust settled, Netflix had conquered the world of streaming — while Blockbuster shuttered its penultimate store in 2019.

It’s since become clear that one era has ended while another has emerged from its ashes. However, in a testament to nostalgia and a passionate urge for real-world community, the world’s last Blockbuster store in Bend, Oregon continues to draw customers.

Ironically, it’s Netflix that is exploring the nostalgia-fueled appeal of the one remaining Blockbuster in a 2021 documentary. The Last Blockbuster goes inside the Bend, Oregon blockbuster and chronicles how tireless general manager Sandi Harding works to keep it afloat.

From selling location-specific merchandise to listing the store on AirBnb for sleepovers, it’s been quite a ride. This is the story of the last Blockbuster. 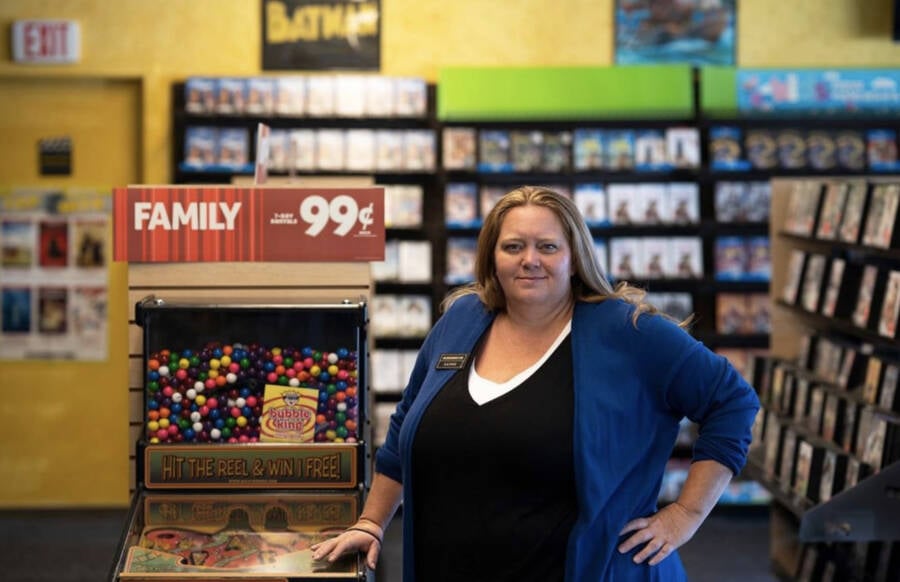 It’s important to note just how steep Blockbuster’s fall from grace has been. While the company managed to eke out some marketshare and survive the 2000s, Blockbuster went bankrupt in 2010 as at-home services became the norm. Only a handful of independent Blockbuster franchises remained in the aftermath.

Within a decade of streaming services arriving on the scene, Blockbuster’s annual $5.9 billion revenue dramatically dropped to $120 million. In July 2018, Blockbuster Alaska declared its two remaining stores were closing. Soon after, the last Blockbusters in Australia closed, too — leaving a lone survivor in Oregon.

For Sandi Harding, managing the last Blockbuster has been a struggle. Stocking the shelves with new releases in itself has been a challenge, as the 20-year-old store outlived its local DVD distributor. In order to make sure the most popular titles are available for her customers, Harding purchases the copies herself.

“The big title for next week is Call of the Wild,” she said. “I usually start out with 30 on DVD, and 12 to 14 Blu-Ray. I’ll go to Walmart, Target, Fred Meyer, every retailer we have here in town, and I’ll only get five or 10 from each one. They don’t like me very much if I come in and just wipe out their shelves.” 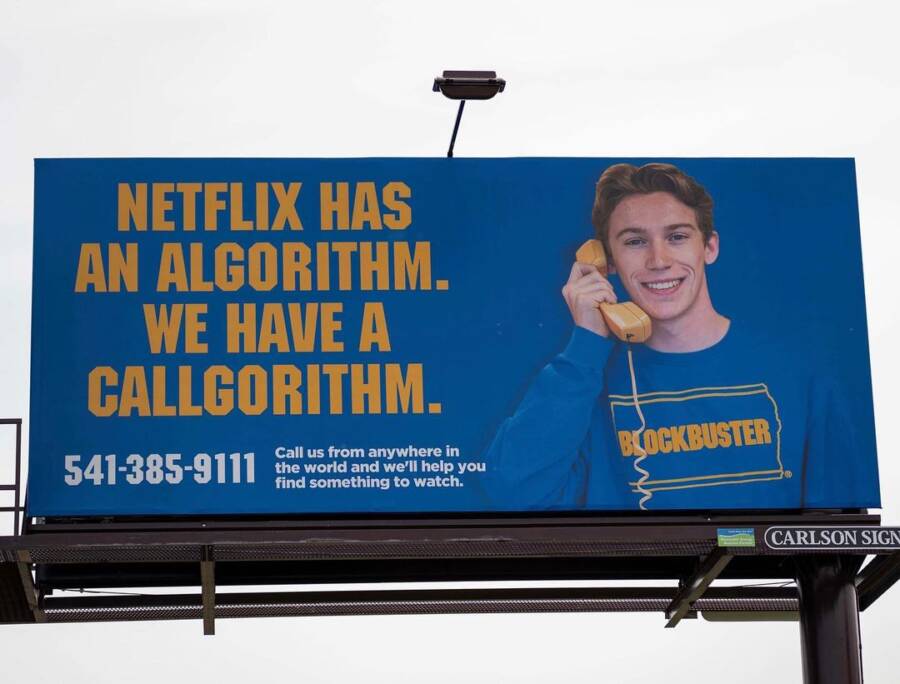 InstagramHarding said her customers were tired of choosing movies based on algorithms and much preferred her method.

The store now boasts popular memorabilia such as Russel Crowe’s jockstrap from Cinderella Man, which HBO’s John Oliver purchased for $7,000 and donated to the Anchorage location in a futile attempt to save it. Ironically, the item began to pose a problem for Harding’s surviving store in the early days of the pandemic.

Harding initially relied on store-specific merchandise like Blockbuster t-shirts, hoodies, and hats one could buy on site or online.

The store even temporarily partnered with regional brewing company 10 Barrel to produce aptly-named batches of “Last Blockbuster” beer. The location also offers coveted replicas of the old membership card which boast surviving COVID-19 alongside the store. It became increasingly clear, however, that the pandemic was threatening the business.

The Bend, Oregon Blockbuster In The Time Of The Pandemic

An Inside Edition look at the last Blockbuster.

After briefly closing when the coronavirus emerged, Harding implemented a crafty curbside service alternative in March 2020, like many other businesses across the country. Harding reassessed safety measures inside, hired a local artist to paint the curbside window, and reopened to massive crowds in April.

“I wasn’t able to keep people apart, and I thought, ‘Well, this isn’t going to work,'” said Harding.

Since then, customers simply call ahead and pay for their rentals over the phone before masked-and-gloved employees hand over their movie choices through the window. As for the DVDs themselves, the last Blockbuster store diligently cleans each case with Clorox wipes before handing them over in Ziplocs.

While the average 10-15 daily curbside customer tally is “a drop in the bucket” compared to pre-pandemic figures, Harding has felt a sense of prideful duty to the world. She’s now the lone patron to those who still cherish the tangible experience of browsing for a flick and yearn to travel somewhere to get it. 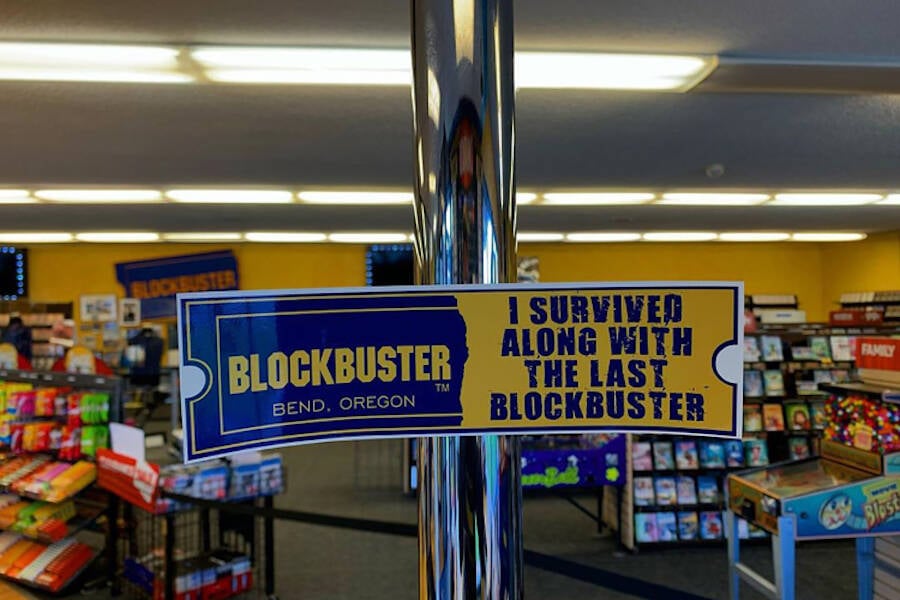 “You’re in a tight spot, because part of you is looking at the economics of it and thinking ‘I have to have customers coming and spending money, or my business isn’t going to be viable, but at the same time, I’m like the Blockbuster Mom,” she said.

“These are my kids that work here, the customers are my family and my gosh, I can’t put them at risk either. Your heart is just torn in two different directions.”

While the store closed for a second time, none of its 12 employees were laid off or missed a paycheck as a result. The whole staff helped Harding replace all 22,000 DVD labels during that closure, and the business even succeeded in receiving a Paycheck Protection Program Loan from the government.

After wiping the whole store down yet again and stocking up on masks and gloves, Harding finally reopened her doors. This time, however, the last Blockbuster offered more than movie rentals — and offered customers the chance to rent the whole store for nostalgia-laden sleepovers on AirBnb.

Renting Nostalgia For A Sleepover 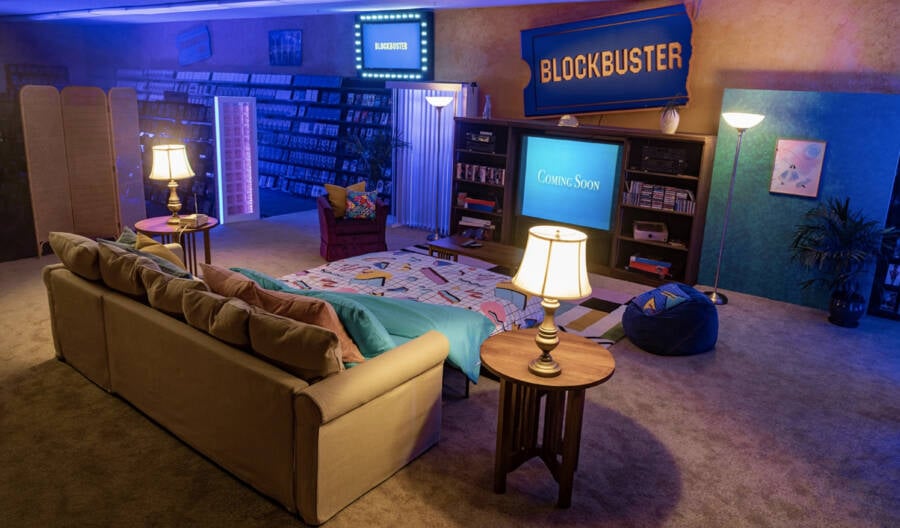 AirbnbThe space was open for three one-night rentals to locals only.

When Harding reopened the store, some of her most devoted customers personally professed how much they appreciated her efforts. “I had a customer come in and she said, ‘I am so grateful that you reopened, because I couldn’t flip through Netflix one more time.'”

As it turns out, non-streamers have been so drawn to the Oregon Blockbuster store because of its selection, one that is not dictated by algorithms but rather Harding’s personalized “Callgorithm,” which are suggestions she can give over the phone.

“At first it was Outbreak, Contagion, and any pandemic movie out there, but now it’s pretty much everything,” said Harding. “Someone rented the entire Indiana Jones series, others are getting classics like Somewhere in Time, and I think that’s kind of the beauty of our store.”

“They probably could’ve found the movie they’re looking for [online], but they don’t have to: they can come here, and we’ve got it.”

A TODAY segment on the sleepovers at the last Blockbuster.

It’s no surprise that Harding’s determination and tireless efforts have seen the last Blockbuster through the coronavirus pandemic. Her declaration to “keep fighting for a while” at the beginning of the outbreak was firm, but nobody could’ve foreseen the true toll it has taken on businesses like hers.

An expert in using the cards she’s been dealt to her advantage, Harding resourcefully listed the store on AirBnb. For just $4 (plus taxes and fees), obsessives of the analog era were able to orchestrate their own sleepovers inside the store. That included free snacks, a sofa bed, large TV, and of course, a trusty VCR.

“With everybody being stuck at home and re-experiencing family time together, we thought it would be fun to enjoy some family time in a throwback ’90s environment,” she said. “There will be some rules with social distancing, but for the most part they can just enjoy their evening, enjoy pizza and popcorn and just have a blast.”

Harding admitted that it “was a challenge to find that chunky TV” but was adamant it had to be done. 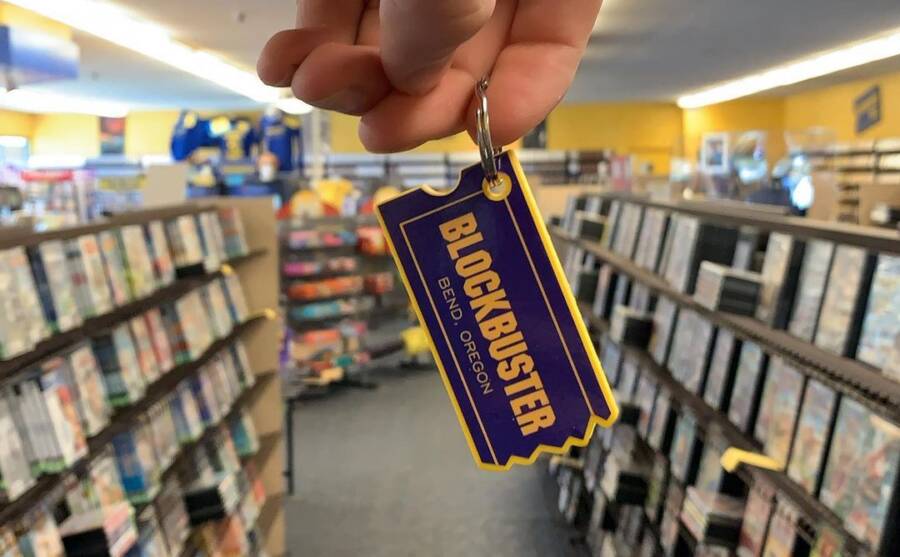 InstagramFrom 9,000 stores to one — the Bend Blockbuster location stands strong.

While Netflix is largely responsible for putting Blockbuster out of business, the rental company made its own bed by rejecting the streamer’s offer to acquire it in 2000. For generations who experienced Blockbuster’s heyday, however, there’s still a way to return to that golden era without traveling all the way to Bend.

“A lot of people know that Blockbuster had the chance to buy Netflix early on, and they passed on the opportunity,” the cheeky press release stated. “In an ironic twist of fate, our movie The Last Blockbuster is coming to Netflix one week from today.”

“We are beyond excited for people to get to see this tribute to an era of home video on the world’s largest streaming service. Just don’t forget to rewind it when you’re done watching it and bring it back by noon on Wednesday.”

With a little help from Netflix, the last Blockbuster in Bend, Oregon may get some much-needed attention during a trying time. The future of this little store remains uncertain, but for now, it continues to survive against almost unimaginable odds.

After learning about the Bend, Oregon Blockbuster, take a look at these 50 incredible behind-the-scenes photos that will change the way you look at movies. Then, learn about how movie reboots, remakes, and sequels go back a lot farther than you think.