The German guards on the outskirts of the city of Zwolle killed Léo Major's friend. Then he killed them — and liberated the entire city on his own.

Léo Major had a knack for doing things alone — things that would be astounding were they accomplished by 50 men at once, let alone one.

Despite having just one good eye, this French-Canadian World War II soldier once captured 93 German soldiers on his own. Then he outdid himself by liberating an entire city from the Germans — once again, on his own.

And the deeper you dig into such accomplishments, the more unbelievable the story of Léo Major becomes…

From D-Day To Blindness

On June 6, 1944, Léo Major landed in France with the rest of the Canadian contingent on D-Day. Major was a scrappy 23-year-old from Québec who had volunteered to join the army and serve in World War II four years earlier because he sought to fight fascism and find adventure abroad. Upon his landing at Normandy, he was about to find it.

Major fought his way past the beaches with the rest of the Canadians and single-handedly captured a German armored vehicle (a sign of things to come) before advancing into France.

Just a few weeks later, a German soldier tossed a grenade toward his position. The grenade exploded and Major lost virtually all sight in his left eye, an injury that would have sent most soldiers back home to sit out the rest of the war.

But Léo Major wasn’t most soldiers. He slapped an eye patch over his ruined eye and asked to be allowed to keep fighting. “I was a sniper. I still had one good eye and could still shoot,” he remarked after the war.

After being partially blinded, Léo Major continued fighting through France and into the Netherlands. There, he took part in the Battle of the Scheldt in October and November of 1944. The battle was part of a larger operation to clear German defenders from the coastal areas of the Netherlands so that supplies could be brought in for Allied troops via ship.

The Canadian First Army, Major among them, was given the task of eliminating German resistance around the Scheldt, a long river running through the country. The going was slow in the face of muddy terrain often cut by canals and entrenched defenders. Immediately, Allied casualties began to mount.

One night during the offensive, Major was dispatched to recover some troops who had gotten lost on patrol. But, facing a German position in the dark, Major suddenly had an idea that could either be called “incredibly reckless” or “suicidally brave” depending on your point of view. Taking his weapons with him, Major slid quietly into the canals surrounding the German position and began to swim. 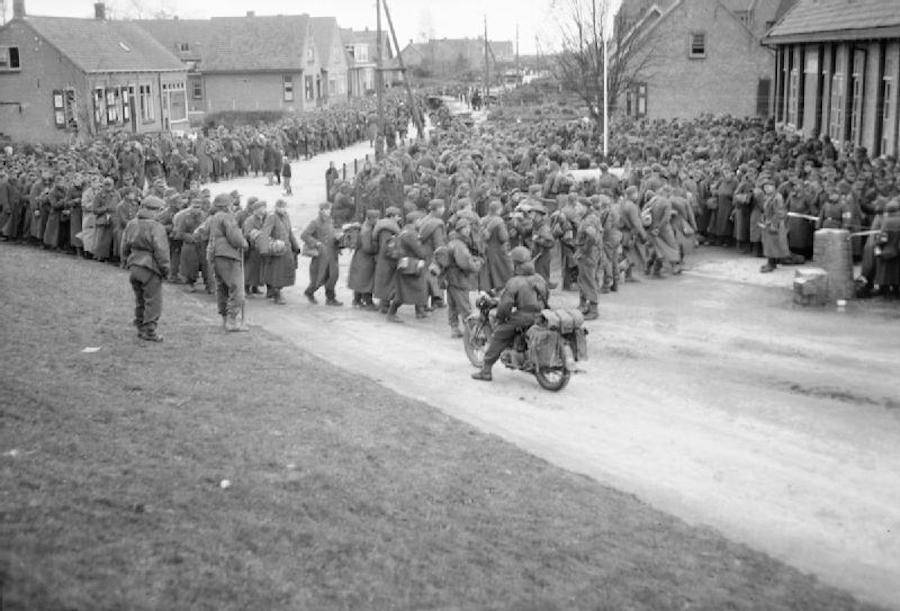 Imperial War Museums/Wikimedia CommonsGerman prisoners being taken at the Battle of the Scheldt.

“I was just like a water rat,” he later said.

The German commander had fallen asleep deep behind a strong defensive position. When he woke up, a Canadian soldier was standing in his room telling him that he was now a POW. And the commander had never heard a single shot fired. Needless to say, he must have been fairly confused.

Major pulled the man out of his headquarters and marched him to the barracks nearby where 93 German soldiers were also asleep. With their commander captured, the soldiers quickly surrendered.

Major then radioed back to his unit to report that he would be returning with a few prisoners and asked if they would send some tank support to keep everyone in line as he marched the Germans back.

His superiors tried to award him the Distinguished Conduct Medal but he refused, claiming that British General Bernard Montgomery, who would have given the award, was “incompetent.”

“Major was a loose cannon, a skinny kid from the wrong side of the tracks who wasn’t afraid of anything,” his biographer Luc Lépine wrote. Of course, Léo Major was also resourceful, independent, and above all, tough, which he would prove yet again shortly after the Battle of the Scheldt.

In February 1945, Major was riding in a truck in the German Rhineland when it hit a landmine. The mine exploded, and Major was launched into the air, coming down hard on his back and fracturing several vertebrae.

Once again, he refused to be taken off active duty. Instead of accepting orders to stay away from the front, he fled and stayed with a civilian family in the Netherlands he’d met previously before slipping back in with his unit a month later (how he avoided punishment remains unclear). Thus the man with one working eye then spent the rest of the war also fighting with a bad back — which makes what happened next even more incredible. 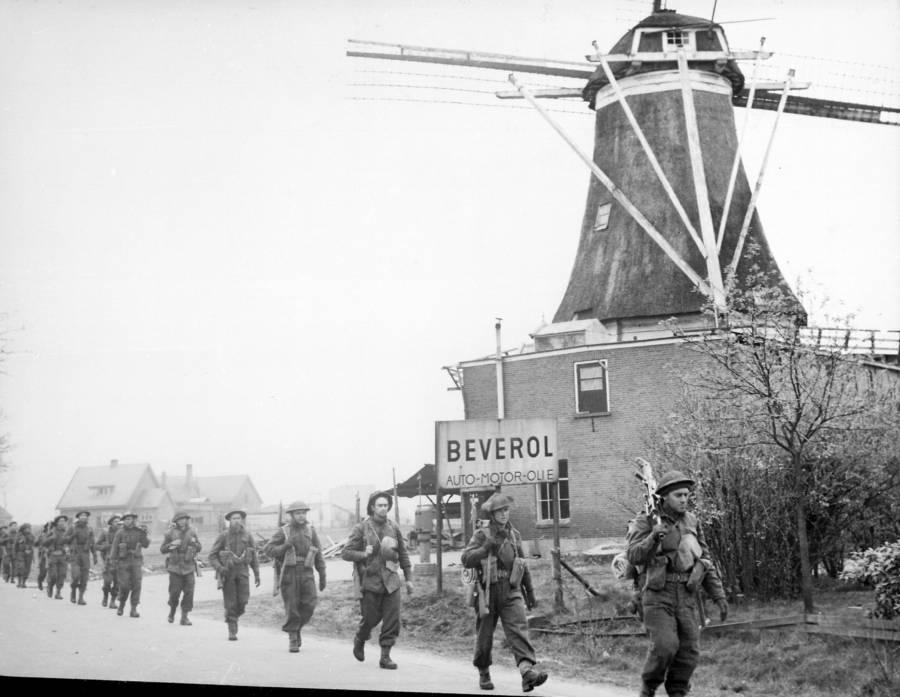 In April 1945, as the Canadians advanced north into the Netherlands, they came upon the German-occupied city of Zwolle. Léo Major and another soldier who was a friend of his were sent into the outskirts of the city shortly after dark on April 13 as part of a reconnaissance mission.

During the mission, the two ran into a pair of German soldiers who opened fire on them. Major’s friend was hit and mortally wounded. An enraged Major then returned fire, killing the Germans, but it was too late to save his friend’s life.

“After that, I had one fixed idea,” Léo Major later wrote. “It was to liberate Zwolle no matter what I was going to meet in the streets.”

He first found a German officer and, gun in hand, convinced him that a major Canadian force was coming to obliterate them. Major then released the officer so that the man would encourage his comrades to evacuate and warn them that an attack was imminent.

Major then spent the rest of the night simulating that massive attack on the city all on his own. He ran from position to position firing at groups of German defenders and throwing grenades. When each pocket of German troops figured that they must be under attack from a huge force of Canadians, Major showed up to take them prisoner, eight or ten at a time, and turn them over to Dutch resistance members.

By morning, he had captured more than 50 men and forced the rest to retreat. Canadian troops soon entered the city with no opposition. Major had liberated Zwolle’s 50,000 people by himself.

Upon the end of the war in Europe, mere weeks after he’d liberated Zwolle, Léo Major returned to Canada. But war wasn’t done with him.

When the Korean War broke out in 1950, Major volunteered to fight once again. The next year, he found himself fighting the Chinese and retaking an important position on Hill 355, a battleground some 20 miles north of Seoul that was of strategic importance for supply routes.

In late November, Major and about 20 comrades snuck into the Chinese camp and began firing. The Chinese assumed they’d been overrun and retreated.

For three days, Major and his men held the position against Chinese counterattacks made by forces that far outnumbered theirs. At one point, the situation grew so dire that Major’s superiors ordered him to retreat, but, true to form, he refused. Major and his men held out, won the day, and survived to return home again.

Although he’d once again made it home in one piece, he spent the rest of his life suffering from health problems due to his numerous injuries and lived off his pension. He spent his days quietly living in relative obscurity in his own country. However, he is still remembered in Zwolle, where there is now a street named after him.

According to people who knew him, the lack of recognition in his own country suited him well.

Major wasn’t the type to crave attention. He didn’t even tell anyone about Zwolle until 1969, when some residents of the city tracked him down and asked him to take part in a ceremony commemorating its liberation from the Nazis.

Though he would sometimes talk about the war if people asked, he was always humble about his achievements, right up until his death at age 87 in 2008.

“I fought the war with only one eye,” he said, “and I did pretty good.”

After this look at Léo Major, read up on other heroic soldiers of decades past, including the sword-wielding “Mad” Jack Churchill, the apparently unkillable Adrian Carton de Wiart, and the sniper extraordinaire Carlos Hathcock.