Orangutans Are Critically Endangered – And People Won’t Stop Hunting Them

Hundreds are killed each year for their meat alone, and recent reports show that the species will go extinct if current population trends don't change. 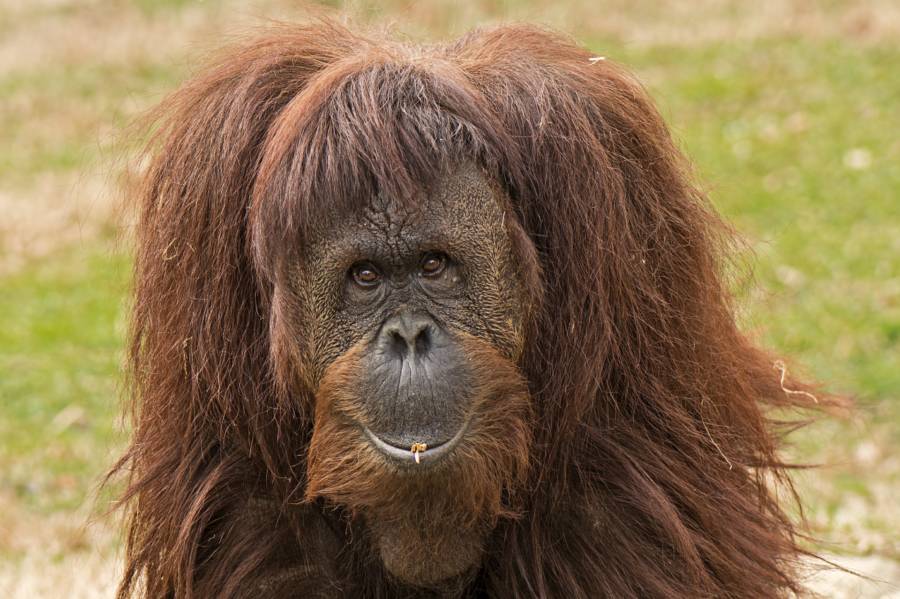 The critically endangered orangutan may be our closest genetic relative and one of the animals most in need of our help in terms of rainforest conservation. But it turns out that we’ve long been harming the species’ chances of survival more so than we even thought — and in ways we didn’t even realize.

The prevailing view has always been that orangutans don’t coexist well with people and can only thrive in their rainforest habitats in Borneo and Sumatra. We also have always assumed that orangutans are vulnerable to most habitats.

However, new research published in Science Advances on June 27 used genetic and fossil evidence to show that humans have been affecting orangutan populations for some 70,000 years in a number of ways, especially by hunting them.

Evidence shows that orangutans have demonstrated great flexibility in responding to both encroachment and direct threats from humans. But there is, of course, a limit to that flexibility: namely, hunting.

“If you hunt orangutans, and eliminate their access to natural forest, this has a very negative effect on orangutan populations,” Stephanie Spehar, the study’s lead author, told All That’s Interesting.

Fossil evidence of hunting weapons suggests that humans have been hunting these creatures for thousands of years. And because orangutans reproduce at a slow rate, even a minor increase in their mortality can cause a big dent in their population. Furthermore, as a result of increased hunting by humans, orangutans likely retreated further into the forest to counter the threat.

And the hunting of orangutans is still a problem today, when hundreds are killed each year for their meat.

“For orangutans, it seems they can be resilient in the face of some human habitat changes, even surviving in industrial plantations in some cases, but that hunting really does them in,” Spehar said.

That said, hunting is far from the only human activity that has caused orangutan populations to decrease over time, especially in modern history, with their numbers now only about half of what they were a century ago. In fact, recent reports say that their population has dropped by 100,000 over the last 16 years and that the species will go extinct if current trends continue.

Other human activities that have proved harmful include, as we’ve long figured, our encroachment on their territory and our violent defense of our own territory. “One of the most common contexts in which orangutan-human conflict occurs is around crops,” said Spehar.

For instance, orangutans will go into cultivated areas, like gardens or industrial plantations, to look for food. And we’ll respond with violence.

Even though it’s illegal to kill orangutans, Spehar said, “there have been some recent high-profile cases in which plantation managers were reportedly encouraging their employees to kill ‘problem’ orangutans.”

These sorts of problems between humans and orangutans are nothing new. Evidence shows that orangutan populations saw a steep decline as far back as 20,000 years ago because humans began burning and clearing forests across Southeast Asia for purposes of farming and hunting.

“I think the most significant misunderstanding is that people think of orangutans as these creatures that have only recently come into contact with humans, and therefore have very limited capacity for resilience to human actions,” Spehar said.

Thus it appears that we’ve not only been damaging orangutan populations for much longer than we realized but also that we’re harming them today thanks to activities like hunting to an even greater extent than we realized.

And understanding how exactly it is that we affect orangutans will obviously only improve our conservation strategies.

“If we can understand what kinds of human impacts species can withstand, and what impacts they can’t, we can figure out how to design a future where coexistence is possible,” explained Spehar.

Understanding this can shape a conservation policy that incorporates the prevention of hunting and killing orangutans, rather than a prioritization on simply protecting forests.

“The bottom line,” Spehar said, “is that I want wild orangutans to stick around. And if that’s going to be true, something has to change.”

Next read about the rare albino orangutan that was rescued from captivity. Then read about the little girl who was foundliving with a pack of monkey.